I started teaching back in 1998... right around the time Apple Computer came out with the Think Different advertising campaign.


During that time Apple created a variety of promotional posters including a special educator set that included ten 11" x 17" posters.  My principal gave me a complete set along with several duplicates, but I never got around to hanging them up.  However there was one larger poster of Dr. Martin Luther King Jr. that I especially liked.  I immediately had the poster laminated and each year, I hang it up in my classroom.

Years later, I discovered that these posters are pretty desirable and fetch a pretty penny on eBay (yeah, I know I ruined the MLK poster).  That's also when I stumbled across the Jackie Robinson Think Different poster.  I knew right then and there that I wanted one, but at the time they were way out of my price range.

Eventually I stopped searching for the poster and moved on to other things.  Then a few months ago, one of my students asked me about my MLK poster, which led me to tracking down my latest Jackie Robinson PC addition: 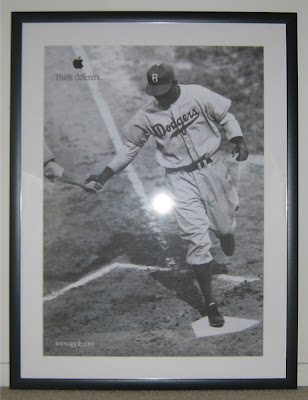 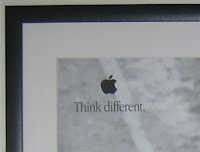 I found a BIN listing on eBay for $42 with a best offer option, so I offered the guy $30 and he accepted.  To be honest, I was weary about my purchase.  It's been well documented that there are a lot of fake Think Different posters on the market.

And you know what they say, if something sounds too good to be true, it probably is.  However my worries disappeared when I received the poster.  It arrived with the Apple Newspaper it was originally housed in.

But I ran into another problem.  How do I display this poster without damaging it?  I wanted to have the poster framed and matted, but I knew tape would be involved.  My solution?  I bought another copy from the same seller.  This time he accepted my $20 offer.

Unfortunately the posters are 20" x 28", which isn't your standard size.  I went to a few frame stores, including Michaels and the cheapest quote I received was $180.  I ended up buying my frame and matting on Amazon.  The damage?  $41.16.  It's more than the poster itself, but well worth the price.

Now I just need to find a place to hang up this awesome poster.