Don't Call It A Comeback

I'm still enjoying my vacation.  However a few things have happened over the past month that I wanted documented for personal reasons.  Plus I wanted to make sure I didn't completely drop off the face of the blogging world... so here's a brief life update post. 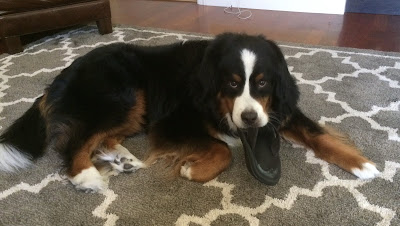 Back on March 11th my best friend's family said goodbye to their eleven year old Bernese Mountain Dog.  I was fortunate to see Chibi the week before.  I will forever treasure the last time we hung out as she wagged her tail in excitement when she saw me and tunneled between my legs. 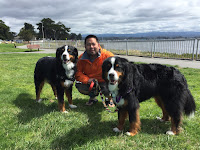 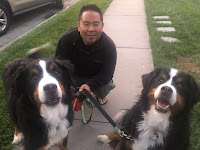 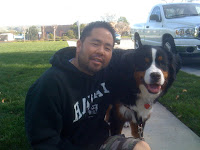 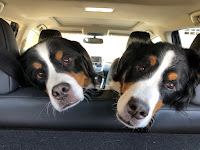 She lived a good life, was well loved, produced many great memories, and will always be remembered.  I was truly lucky to have been a small part of her life.  Rest in peace, Chibi.
In other news... I recently received my second vaccination shot.  It's perfect timing, because the school board voted a couple of weeks ago and we'll be returning to our classrooms in the near future.  It'll be nice to be back in front of students for the first time in over a year.
As for hobby news...
I've been taking advantage of this hobby boom and unloading some stuff taking up space.  Plus a few duplicates and singles that don't really fit into my collection. 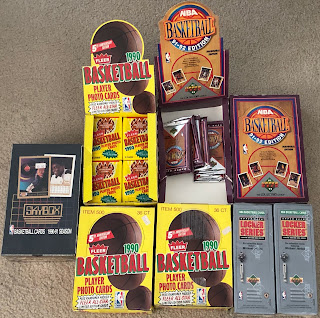 I'll start off with some old Junk Wax Era basketball boxes I had sitting in my classroom for years.  They were used for a "mean", "median", and "mode" lesson I'd teach during summer school.  A few months ago, I noticed that the 1990-91 Fleer boxes were selling for almost $200 each on eBay.  That's when I went to school, picked them up, and listed them on Craigslist.
Can you believe someone paid me $400 for this lot?  I assure you that I'm not a flipper, but there was no way I could pass up that opportunity.
Moving along to eBay sales... 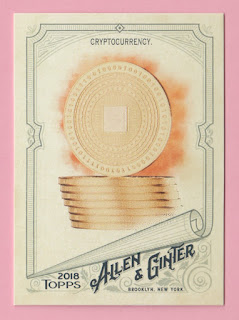 2018 Topps A&G #83
Thanks to Nick over at Dime Boxes... I discovered that people are going nuts over this Cryptocurrency card.  It inspired me to dig through my Ginter box where I found this lone copy and flipped it within 24 hours.
People have also been paying good money for 1990 Marvel Universe holograms... 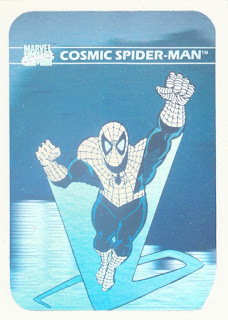 1990 Impel Marvel Universe Holograms #MH1
A few years ago I purchased a bunch of these sets for around 25¢ each.  The past few weeks, I've managed to sell two sets ($200 & $220).  It looks like these sets are starting to settle... as I've been forced to lower my asking price, but I hope to move most of these at a huge profit margin to help recoup some of the money I've spent on card purchases over the past 40 years (without digging into my personal collection).
My two largest eBay sales were PSA 10 Shaquille O'Neal rookie cards that I purchased on COMC about a decade ago for under $3.50 each.  Each fetched over $300.  I'm hoping to move a few more, but like the Marvel hologram sets prices have begun to slowly drop.
It would be cool to flip a few more of these, but I'm honestly not in any rush to move them.  It's not like I'm trying to liquidate my collection or anything.  That being said... I have significantly cut back on hobby purchases.
In fact... this Hideo Nomo is the only card I've purchased since the first week of February:

2004 Topps Chrome Refractor #92
I have wanted a refractor version of this card for at least ten years... and a recent post over on Night Owl Cards motivated me to track down this copy on eBay for $3.60 (tax & shipping included).  It's funny... if I saw this sitting at a show in a box with a $3.60 price tag... I probably would have walked away.  But my recent eBay sales have allowed me to splurge a little.
Although I haven't been purchasing cards doesn't mean I haven't added some new stuff to my collection.  I'll round out this post with a trio of PWE's and a couple of care packages from some fellow bloggers and a supporter of the blog.
Let's kick things off with the infamous Menendez Brothers' rookie card: 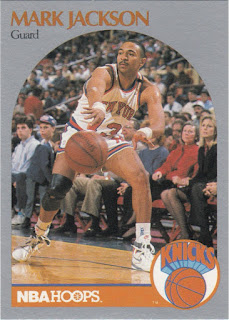 1990-91 Hoops #205
This is one of those cards that became an overnight sensation a few years ago.  I was hoping to stumble across this card in a dime box when I eventually return to walking around flea markets and card shows. 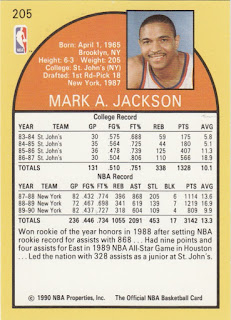 But thanks to P-town Tom (Waiting 'til Next Year) I don't have to live in hope.  He's generously donated a copy to my Sports Card Smorgasbord binder.
Next up is an awesome custom card created by Gregory (Nine Pockets): 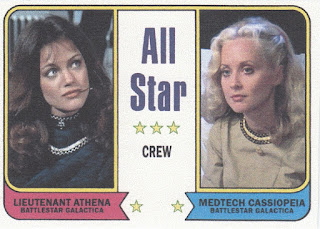 Back in September, he showed off some of his 1974 Topps All-Star non-sports customs and I had suggested he create a Battlestar Galactica version.  The result was these two beauties on one card. 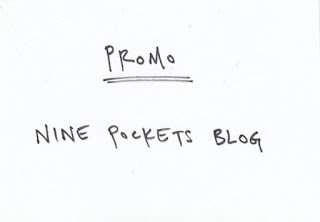 And another nice addition to my Sports Card Smorgasbord binder.
Gregory also sent along a few wax stained gems: 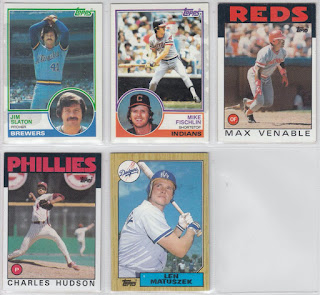 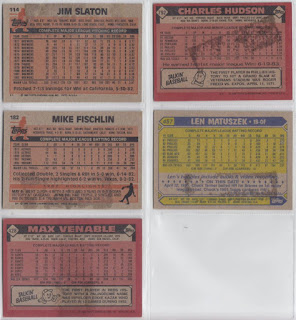 My Damaged Card PC is starting to get out of hand, so I've had to be much more selective in what I add to the binder.  None of these managed to bump any of the current cards, so if any of you are interested in any of these... just let me know down in the comment section and I'll send them your way.  Just make sure to thank Gregory.
The final PWE was sent to me by Elliptical Man (The View from the Third Floor).  Inside were a variety of cards, but the one that stood out to me the most was this card: 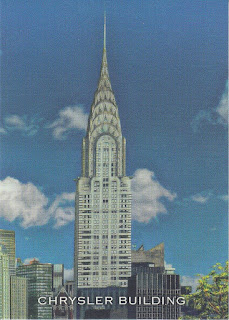 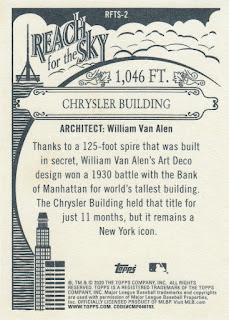 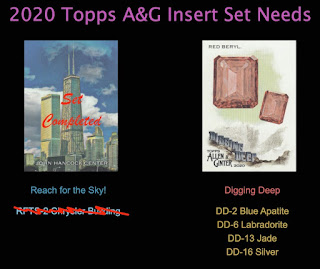 When it comes to card collecting, there are few things more satisfying than crossing off the last card you need for your set build.
Here are the other six cards he sent in the PWE: 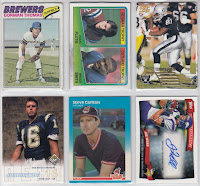 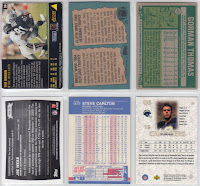 I'm in the process of creating a late 80's binder... and the Carlton will be one of the inaugural additions.  And who doesn't appreciate a new Ryan Leaf rookie card?
Next up was a 400ct. box sent to me by another Tom, who I'll refer to as Reader Tom.  The box contained 106 cards for my 1984 Topps baseball set build, including these big names: 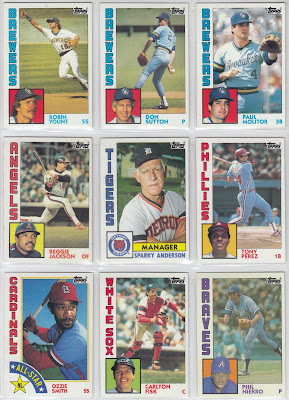 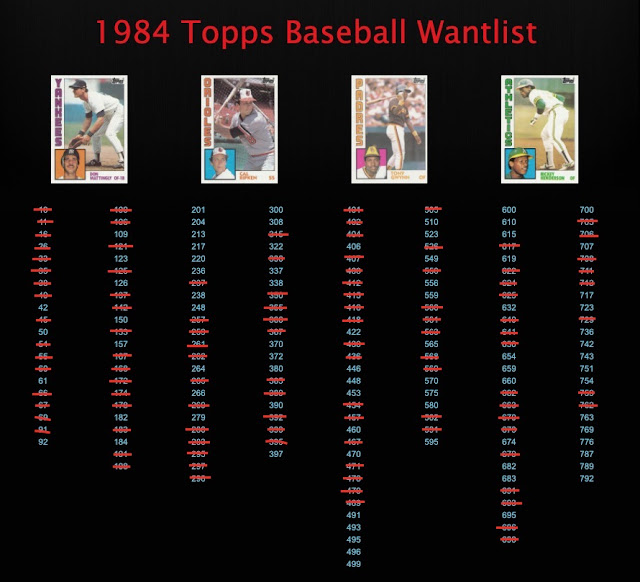 And rounding out my new card acquisitions is this beautiful hall of fame autograph for my Lefty PC: 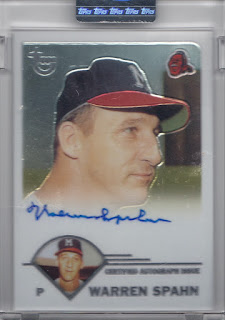 2003 Topps Retired Signature Edition Autograph #TA-WS
Gavin (Baseball Card Breakdown) held a contest that involved a little investigative work and the movie The Shining.  If you're interested in reading the details, click here.  Simply put... luck was on my side and I won.
He had three different prize packages to choose from, but to me this card was a no-brainer.  Warren Spahn is one of the greatest left-handed pitchers of all-time.  Unfortunately... he passed away in 2003... so there aren't a ton of certified, pack pulled autographs oh his out there.  The good news is he was one of those athletes who enjoyed signing for his fans, so there are plenty of autographs out there at very reasonable prices.
As cool as the Spahn is... the highlight of the package was this bonus autograph he included: 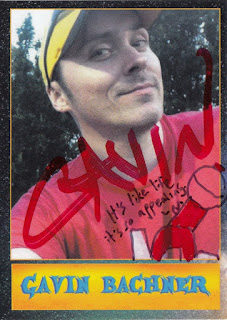 I'm not sure of the story behind this card, but it's the latest addition to my Blogger Autograph PC. 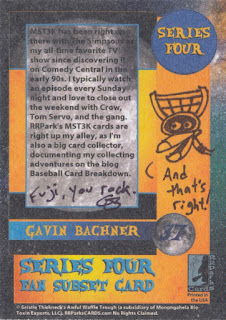 It's extra special, because it comes with some of Gavin's artwork.
And rounding out his care package was another one of Gavin's customs:

This is probably the 20th custom created by Gavin that's been added to my Sports Card Smorgasbord binder over the years.  You've gotta admire his creativity... and of course generosity.
Thank you P-town Tom, Gregory, Elliptical Man, Reader Tom, and Gavin for these generous additions to my card collection.  And thank you for all of those who have taken time out of their busy schedules to come back and check out my blog.
I'm not ready to come back on a regular basis, but my plan is to write "life update" posts from time to time.
Happy Saturday and sayonara!
Posted by Fuji at 9:00 AM 25 comments: