As with most popularity contests... the nerd came up short in his mission to become the Face of the MLB.  But people around the country stood up for the spectacle wearin', platoon playin' hipster.  And it's safe to say he's an Oakland Athletics fan favorite.  And I'm one of those fans standing in his corner.

The fact is... I have always considered myself a "nerd" at heart.  It was around middle school when I realized I wasn't exactly like some of my friends.  While many of them were acquiring girlfriends, I was picking up Jose Canseco rookies.  And when everyone was attending dances and pool parties, I was going to my local card shop.

Luckily, I grew up with a bunch of kids who ended up being popular, so I had a nice "get out of jail for free" card in my back pocket.  I wasn't beaten up, picked on, or teased and never had problems with finding friends.  But I wasn't exactly Joe Cool either. I guess you could call me a "closet nerd".  On the outside, I was the quiet guy who had cool friends, but inside I was the guy who regularly watched Star Wars, collected baseball cards, and read comic books.

That's why I was happy to see Eric Sogard reach the finals in the silly Face of the MLB Twitter competition.  Last night before I went to bed, I checked and he was beating David Wright by four percent (52% to 48%).  A few hours later, Sogard had widened the lead to 10% with only two hours to go.  But when the dust settled... Wright won 51% to the nerd's 49%.

Oh well.  It would have been weird and pretty crazy to have a guy who has a career .241 batting average be the Face of the MLB (whatever that actually means).

Congratulations David Wright and all of the fans who voted for you... but watch your backs for the Revenge of the Nerds:


Happy Friday and sayonara!
Posted by Fuji at 5:00 PM 4 comments:

Wow.  What a way to kick things off in 2014 for the Oakland Athletics.  I'm sure I'll flip back to this highlight video about as often as I take out and admire his 2013 Topps card: 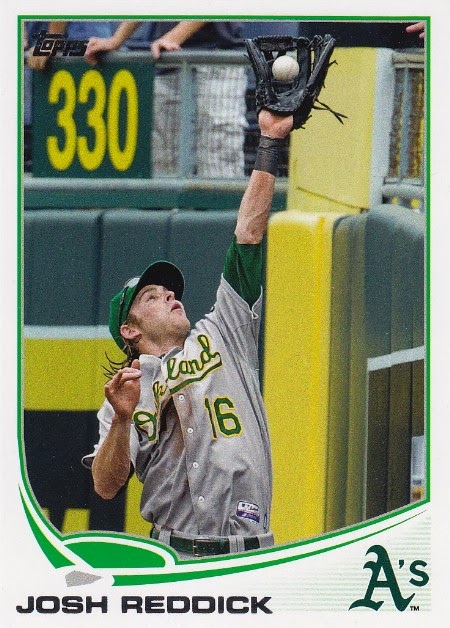 Happy Thursday and sayonara!
Posted by Fuji at 9:00 AM 2 comments:

Do Yourself a Favor... and Walk the Plank.

There's a new blog on the block and its name is Bob Walk the Plank.  I know that a lot of you guys are into baseball cards... and that's exactly what Matt covers on his blog.  In a few days he'll be celebrating his one month anniversary and I'm really enjoying all of his Pittsburgh Pirates posts.

Like many of us, he started a blog in hopes of interacting with collectors as well as finding trade partners.  If you're looking for baseball and football autographs or memorabilia cards, then I encourage you to check out his trade bait.  Even if you're not interested in trading, I highly recommend you heading over there to check out his blog.

Two weeks ago, he told me he wanted to send me a "goodie bag", so we exchanged addresses and "wow" did he deliver.  See for yourself: 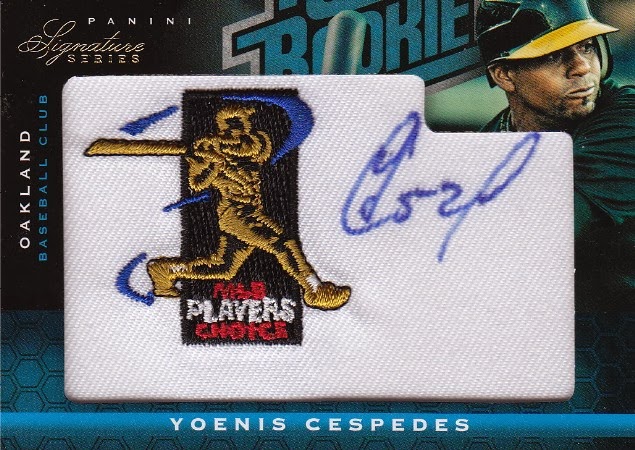 Usually I'd save the best for last.  But I was so stoked to receive this Yoenis Cespedes autograph, I wanted it to be the image everyone saw first.  The Oakland A's aren't really known for their superstars.  But if I had to pick a guy on their roster with the potential to be one, it would be him.

In addition to the autograph, Matt also threw in these Yoenis cards: 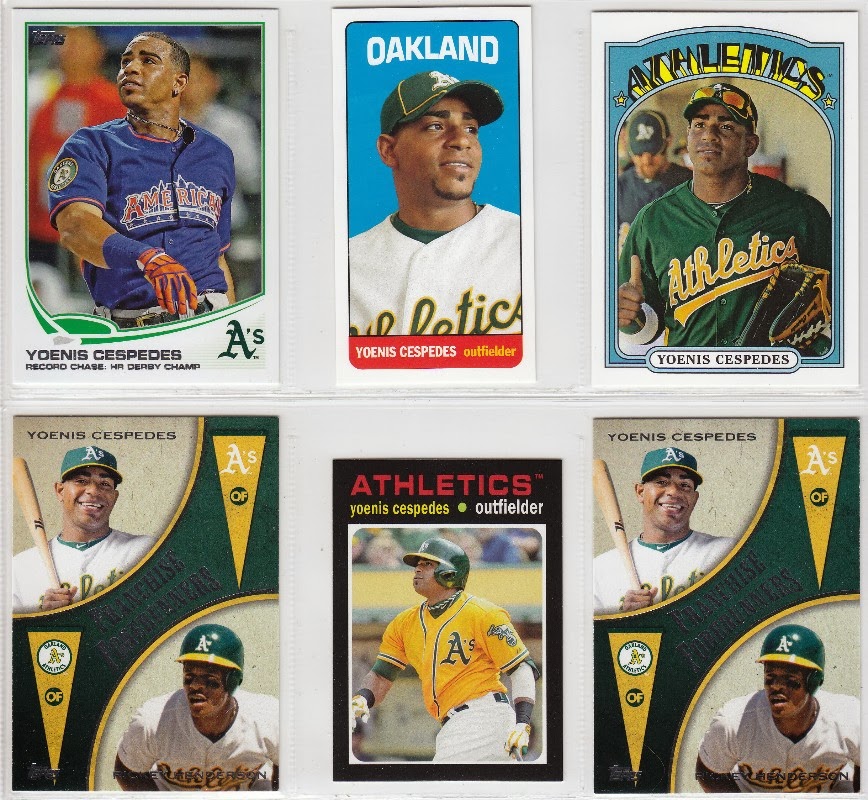 I absolutely love the 71T and Tall Boys minis.  Next up, the boys on 'roids... The Bash Brothers:

And here's another one of those awesome 2013 Topps Archives Mini Tall Boys inserts.  I present to you The Bash Brothers' teammate and the 1989 World Series MVP:

And wrapping up the awesome Oakland A's "goodie bag", here are pair of inserts of another World Series MVP... Mr. October, himself:

Oh wait... I almost forgot.  He also sent me my first Hisashi Iwakuma relic card for my Japanese PC:

Thanks Matt!  That's one of the most generous "goodie bags" I've ever received.

Happy Wednesday and sayonara!
Posted by Fuji at 10:00 PM 1 comment:

Fill My Eyes With That Triple Vision!


A decade later, Upper Deck arrived on the cardboard scene and introduced Triple Vision.  At the time, I had never seen multiple exposure photos used on trading cards.  And I absolutely fell in love with them.

Over the years, these cards were pushed further and further into the dark corners of my head and eventually forgotten.  Thankfully a few of you have written about them on your blogs, which has motivated me to start collecting these cool cards again.  As of right now, I have four cards.

All of them were pulled from those grab bags I picked up two weekends ago: 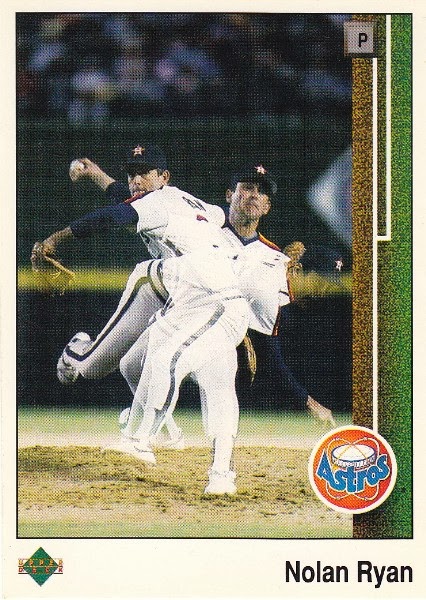 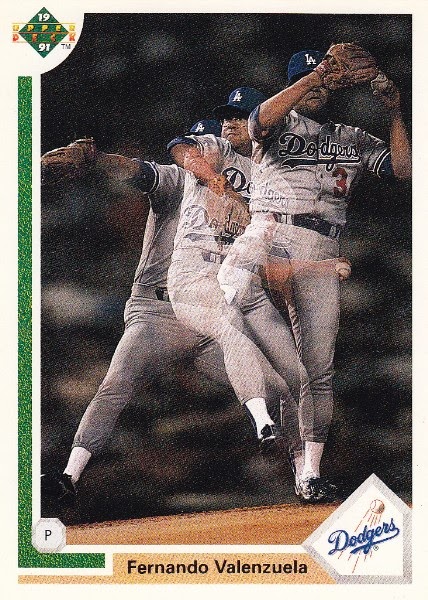 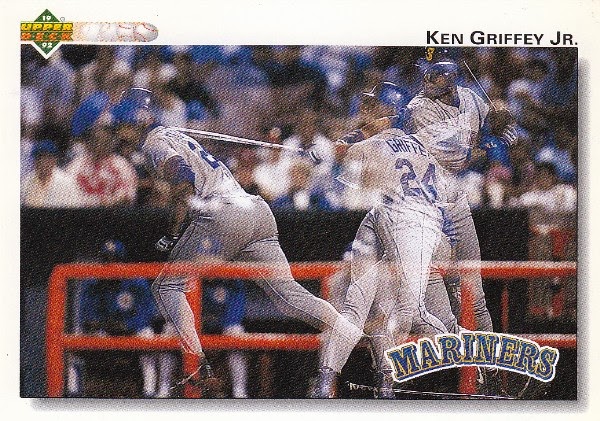 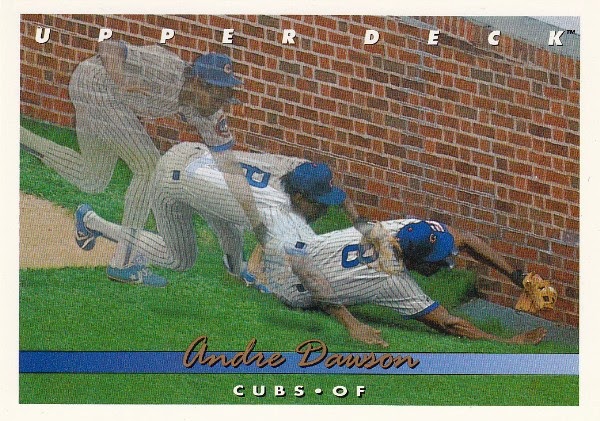 I know that Upper Deck produced a bunch of these cards in a variety of products and sports.  So far, I targeted these:


Most of these have been blogged about in the past.  If you're interested in reading more about these cool cards, I encourage you to check out these posts:

And if you guys know of any additional cards that need to be added to my list, please comment below.

Happy Tuesday and sayonara!
Posted by Fuji at 9:00 AM 11 comments:

There are things in our world that simply defy logic.  The Capitol Flea Market on Thursdays is one of those things.  I just don't understand how they can attract so many vendors and customers during the middle of the week. 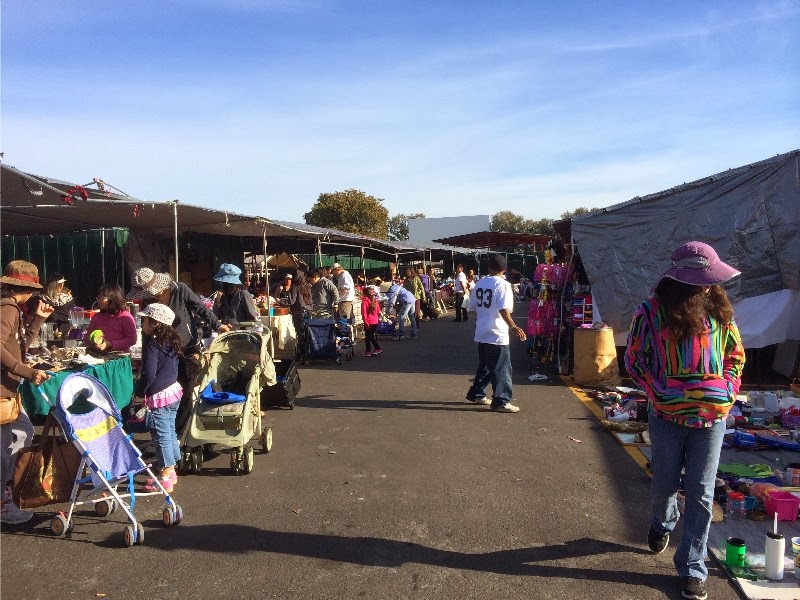 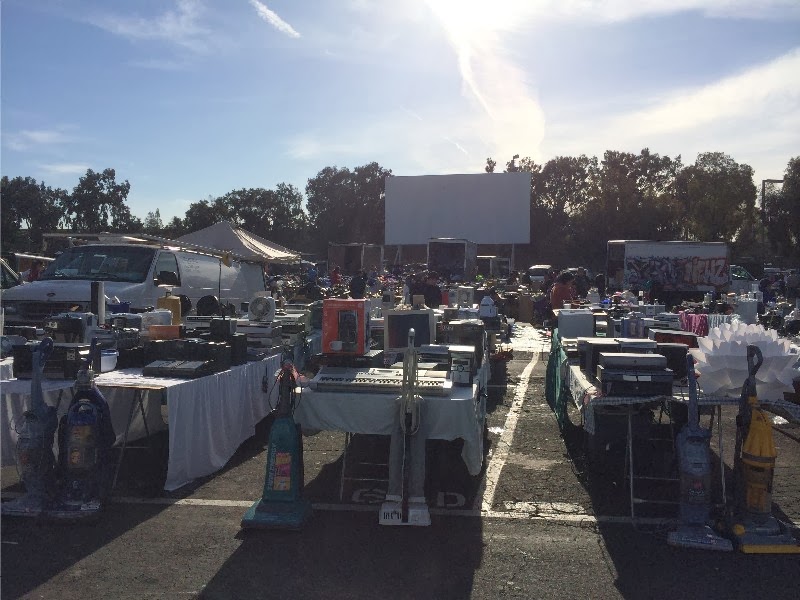 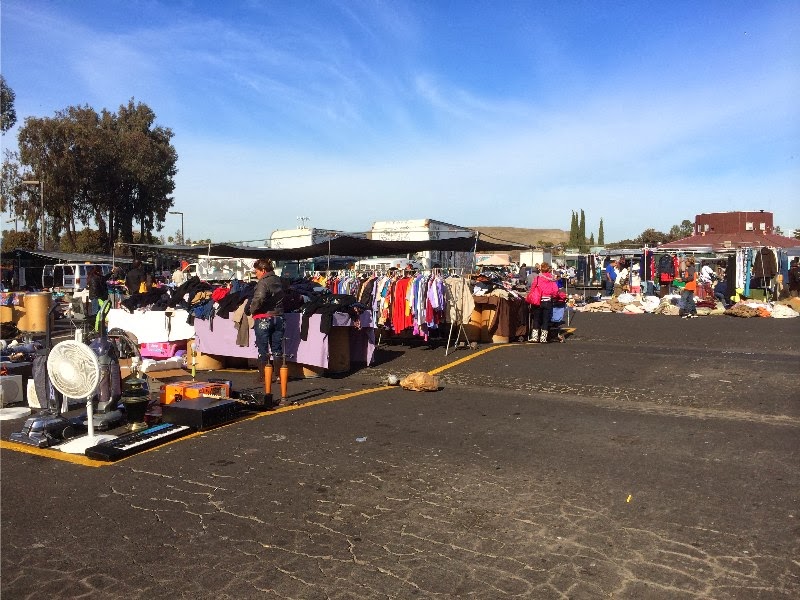 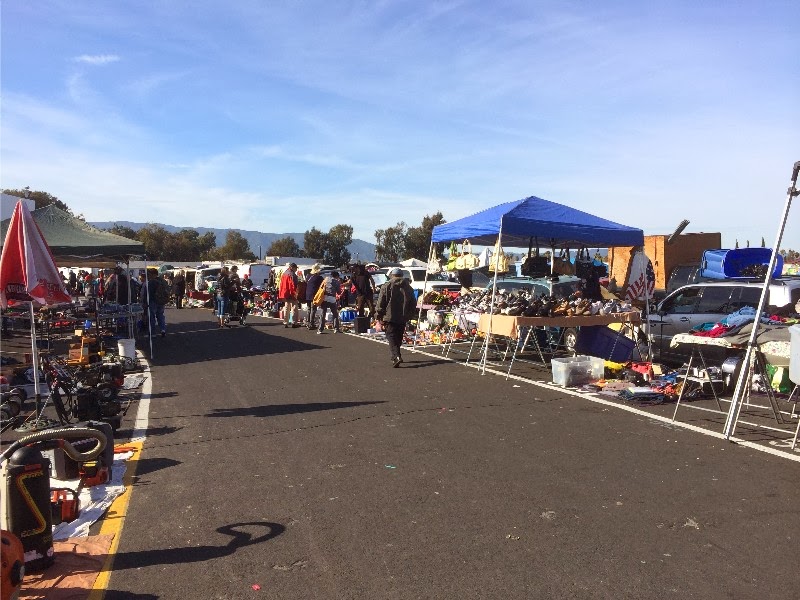 Aren't people suppose to be at work?

This past Thursday I went and spent ten minutes looking for parking and ended up at the furthest end of the parking lot.  Inside... the place was packed.  There were more people walking around than your typical Saturday and just about on par with Sundays.  Best of all... there were only a handful of empty spots, so the reduced price of admission gave you more bang for your buck.

There were a few guys with sports memorabilia, but nothing spectacular.  In fact, I only made one purchase.

When:  Thursday, February 20th
Where:  Capitol Flea Market
What:  Two Packs of Baseball Cards
How Much?: $1

A guy had a box with a bunch of wax packs from the 80's and 90's.  Buried under mounds of 1988 Topps and 1991 Fleer were a pair of 1983 Fleer packs.  I asked him how much he wanted for the packs and he said a dollar each.  Considering the fact that any of the key rookie cards in this set can be purchased these days for a few bucks, I set them back down in the box.

As I began to walk away, he asked me... how much you want to pay?

I offered him a dollar for the pair and he accepted.  Each pack contains 15 baseball cards and one team sticker.

Here's a look at what I pulled: 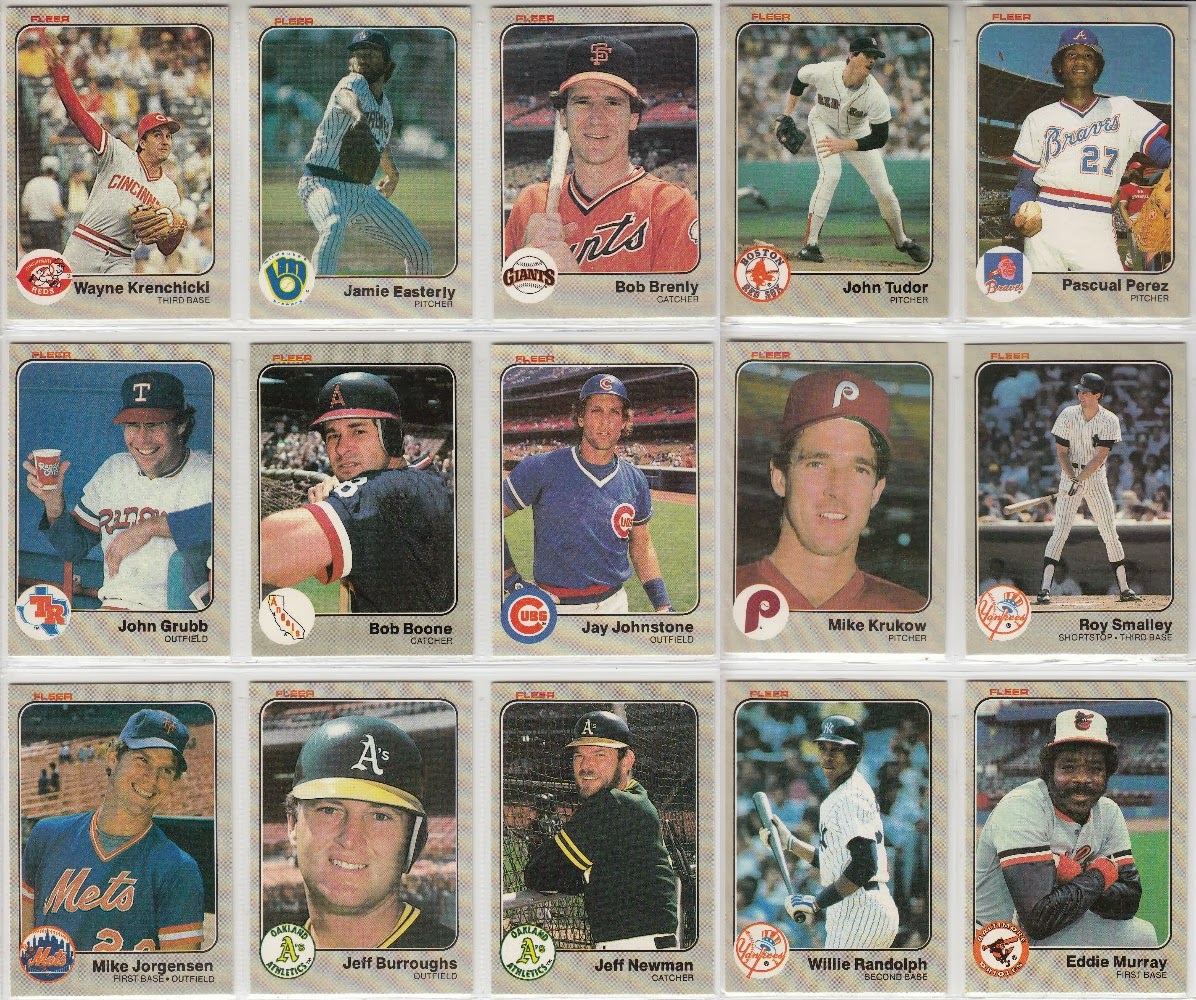 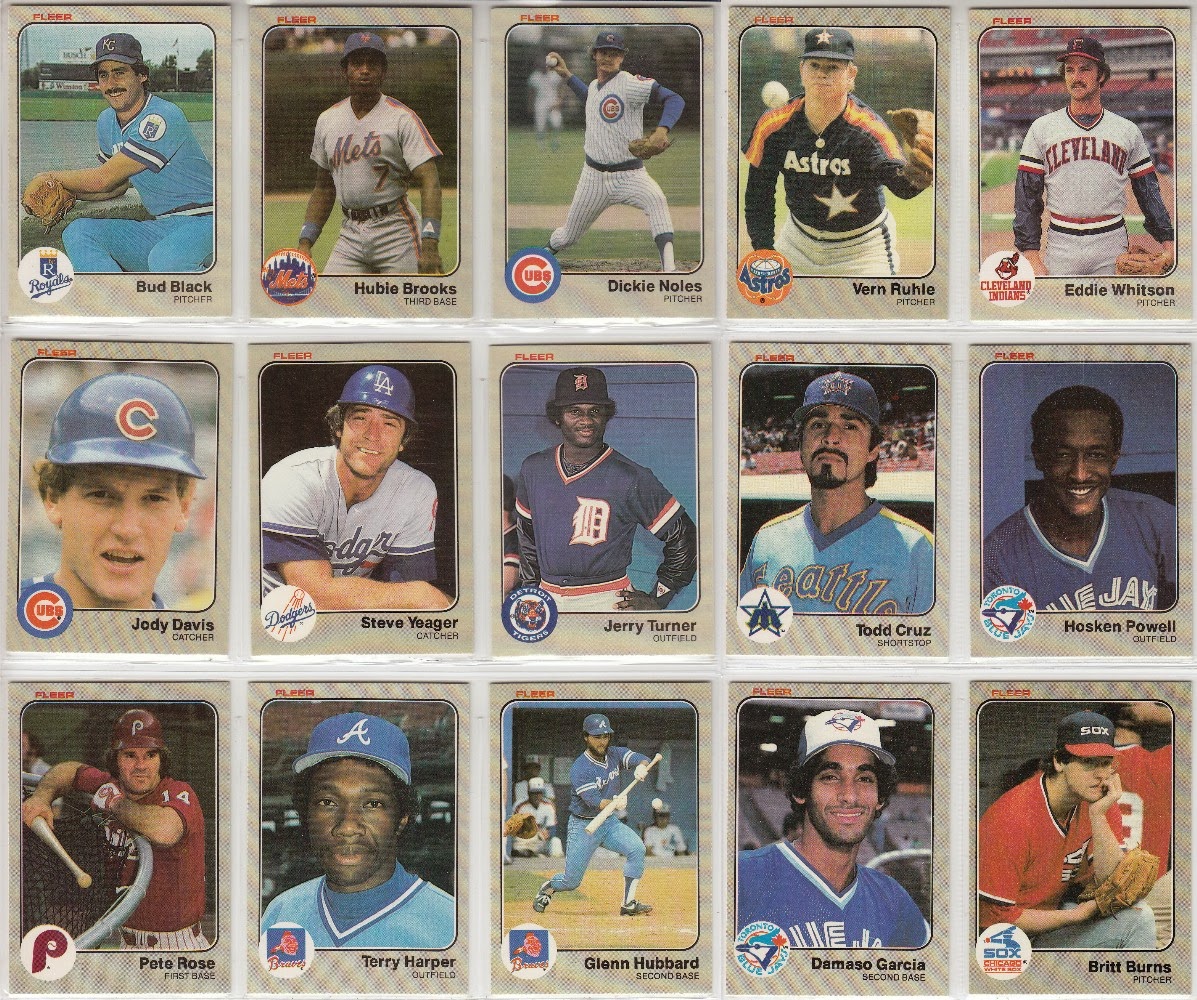 Outside of adding the Eddie Murray and Pete Rose to my binders, there wasn't anything too special in either of the packs.  However the experience of busting thirty year old wax was well worth the money.

When it comes to trading with fellow bloggers, I must confess... I'm super lazy.

A.  I never update my tradebait, even though I probably have close to 200 autographs and memorabilia cards that are sitting in a box that I need to add to my lists.

B.  I rarely seek out trades.  It's safe to say that 90% of my trades were initiated by the other person.

But hopefully my most recent blogger trade is a sign that things are about to change for me.

Last week, I read The Diamond King's post that he updated his trade bait, so I checked it out.  That's when I saw this Steve Garvey memorabilia card: 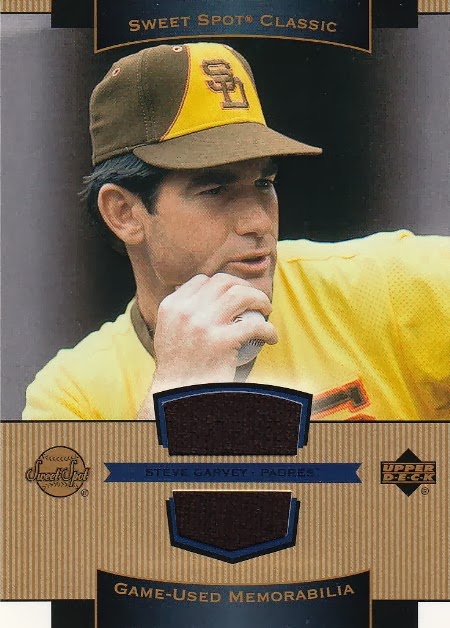 I left a comment on his post and he responded with an email.  Within a few days we hammered out a trade involving some Mark McGwire inserts I had laying around.  I figured it was a pretty straight up trade, until I opened the package and saw these cards:

Three new memorabilia cards for my Seattle Seahawks PC, including a very cool Triple Threads card.  Looks like I fell a little short on my end of the deal.

Thanks for the trade Kevin.  I'll definitely get a few more McGwires out to you in the near future to even things up between us.

Happy Saturday and sayonara!
Posted by Fuji at 5:00 PM 2 comments:

Jump Around and Get Down!

The past two days, I've been tearing through the grab bags I purchased at the flea market on Saturday.  As expected, there weren't any high dollar vintage cards or autographs of hall of famers.

But after opening ten to fifteen of them, I started noticing an abundance of cards featuring baseball players jumping and flying around... turning two.

I'm pretty sure there was a subliminal seed planted on Monday over at Johnny's Trading Spot.  On the other hand, maybe it was it was Mr. GCRL.  Or maybe it was the Night Owl and the beautiful 1953 Bowman Pee Wee Reese that resides in his collection.

Whoever the credit goes to... this post is dedicate to you.

I present to you the House of Pain, Jump Around collection: 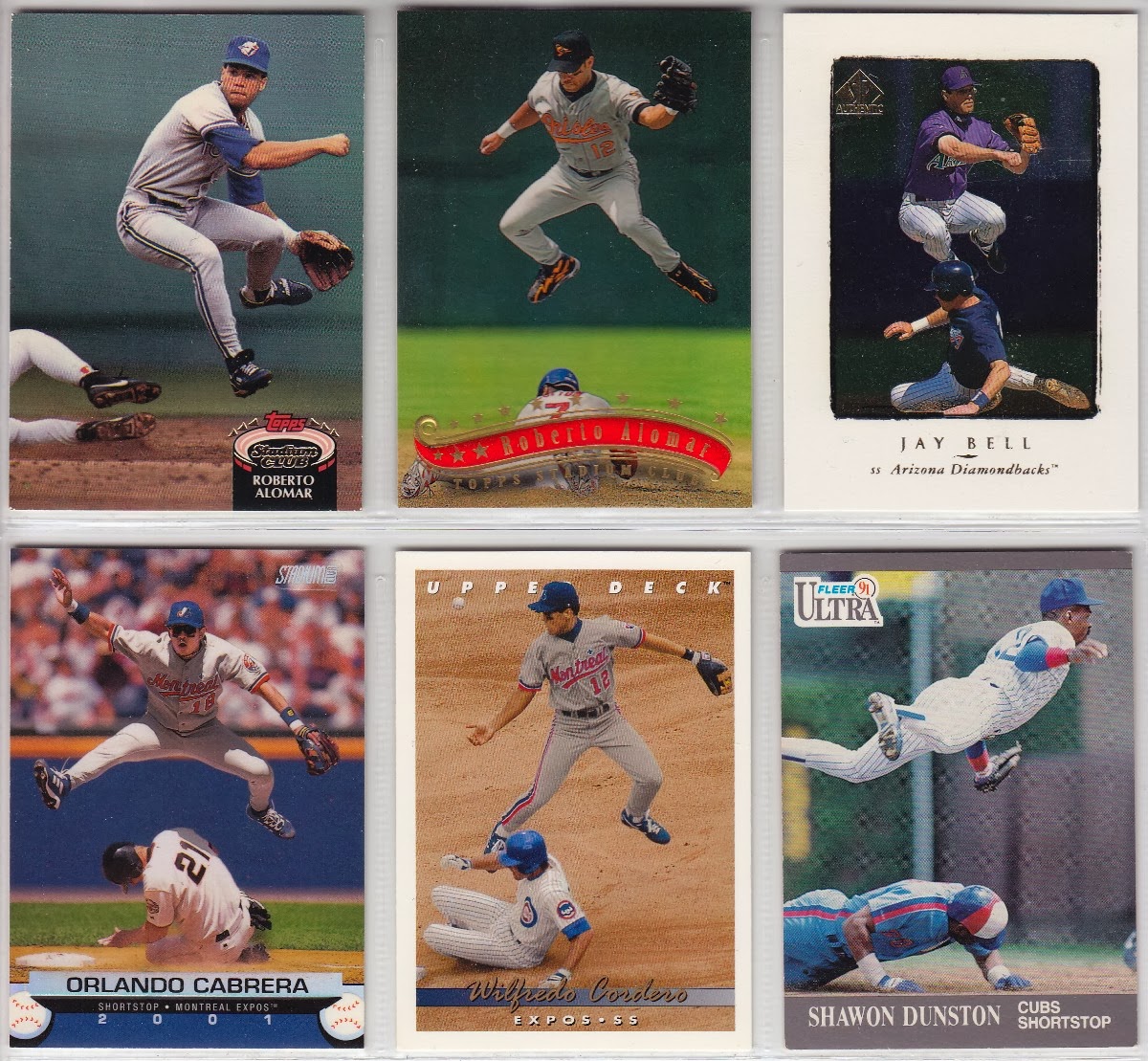 Next up... the Van Halen, Go Ahead and Jump collection: 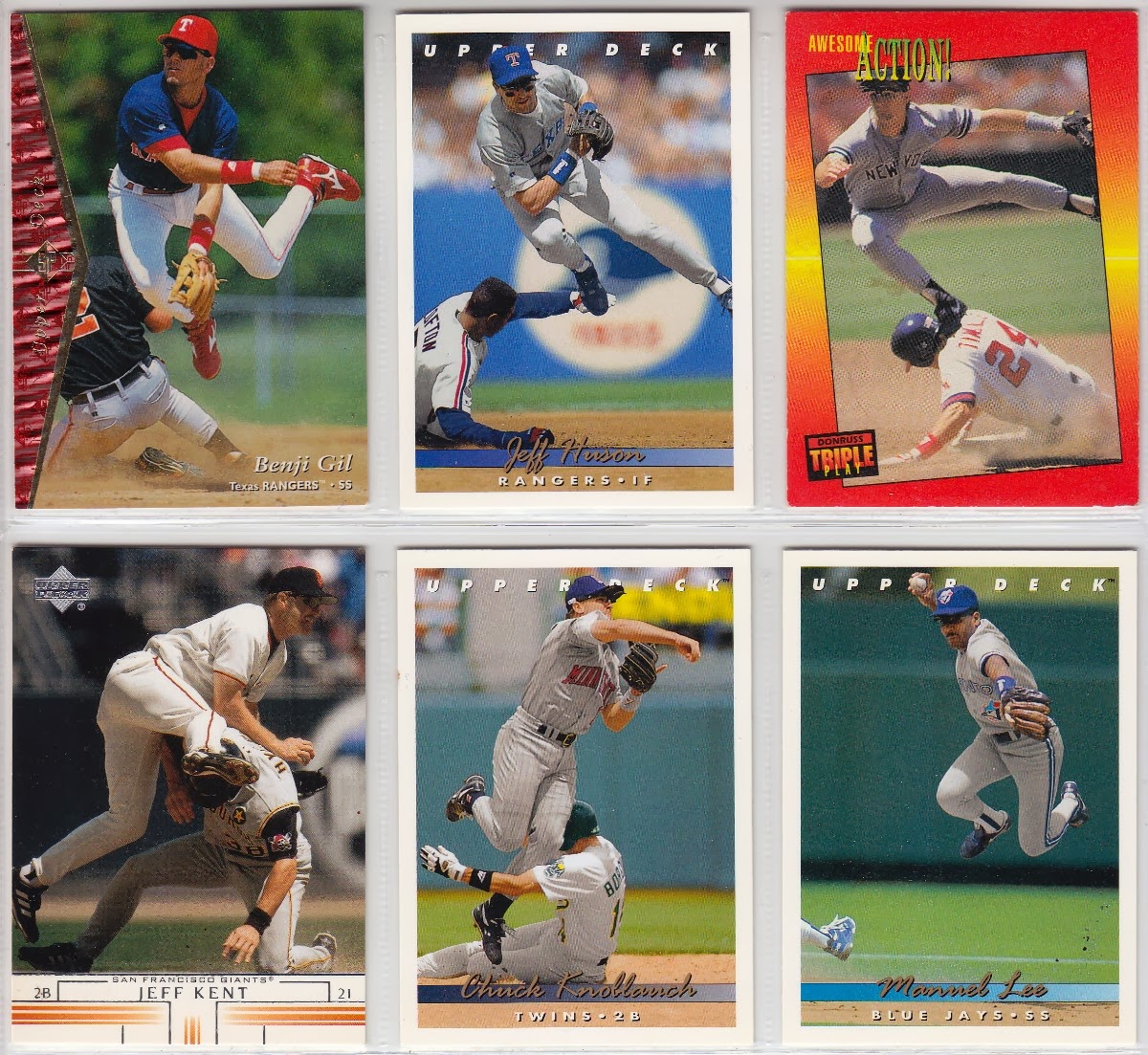 And finally... I'll wrap things up with the Daddy Mac Will Make Ya Jump collection: 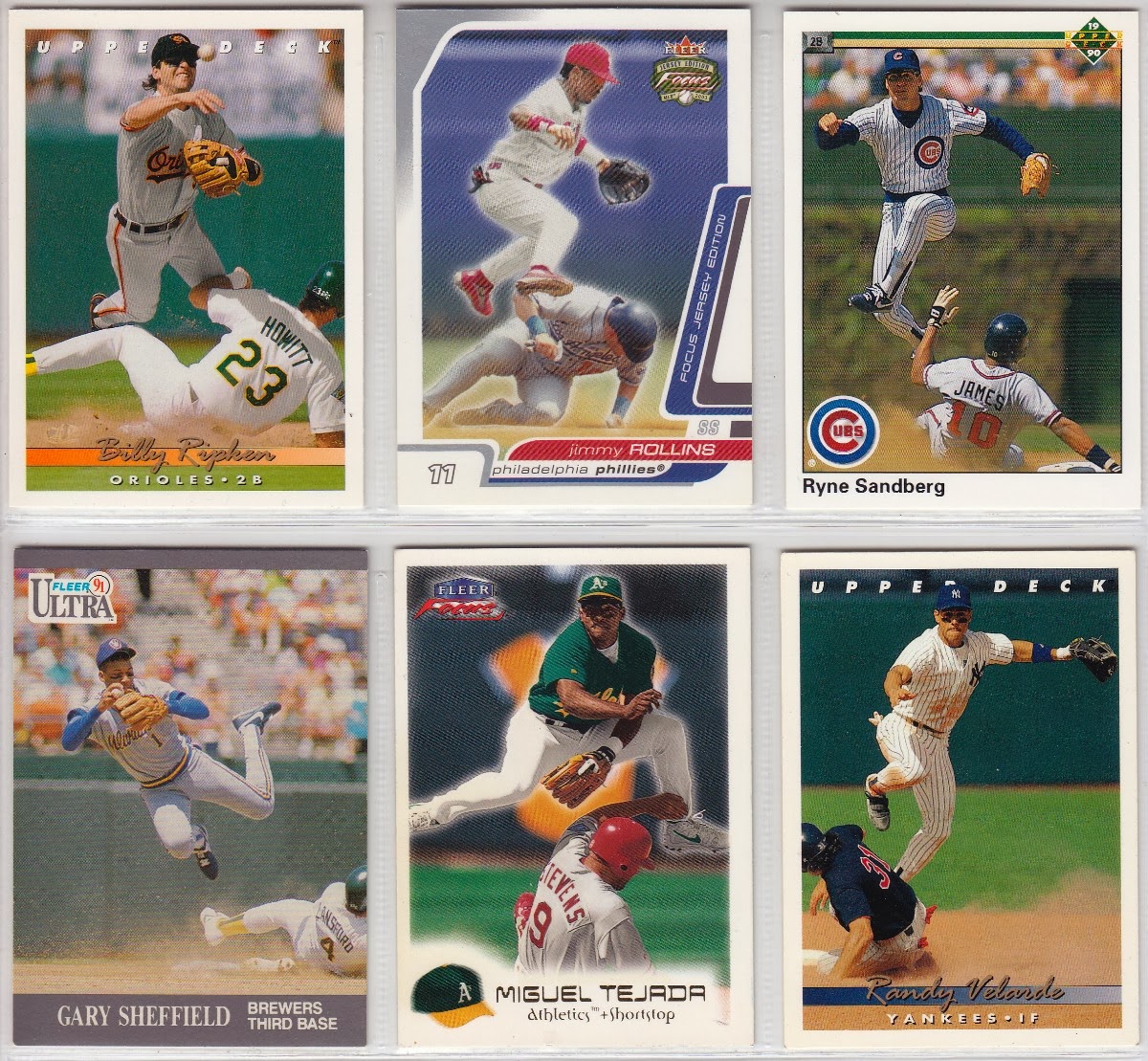 If anyone is interested in these cards for your collection, just answer the following question:


Which song makes you wanna jump?

If more than one person is interested in them, I'll throw your names into a randomizer on Saturday and let random.org do the dirty work.