The Results Are In

Before I announce the winner, let's see if anyone received any bonus entries for correctly answering my questions.

Bonus Question #1:  Out of the 380 dime box cards, how many were new additions to my Tony Gwynn binder? 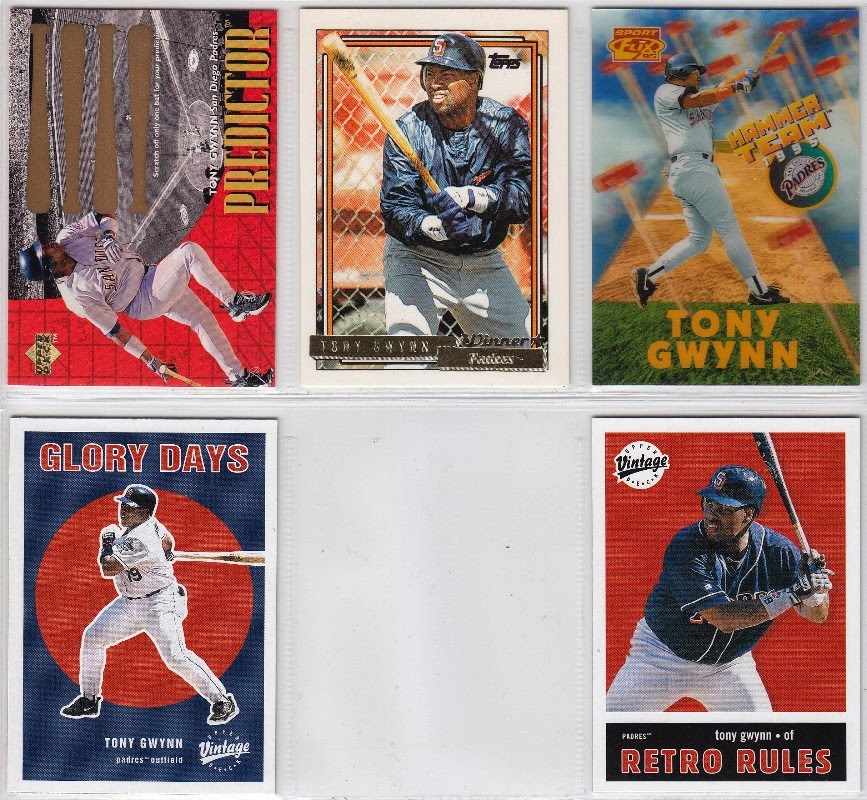 I picked up thirteen Gwynn cards from this guy's boxes, but these were the only five I didn't already own.


Bonus Question #2:  What was the oldest card(s) from the dime box purchase?

I picked up seven singles from this set.  There weren't any superstars, but there were a few minor stars like Willie Horton.


Bonus Question #3:  Which of the nine cards shown (from this dime box purchase) was a card on my Top 10 Wantlist?

I have wanted this card for awhile now for my Montreal Expos collection and was straight up "giddy" when I found it for 10¢.  After all of these years, I still think it's weird seeing Rose in that uniform.  Next up... I want to add the Fleer Update to my collection.

I guess the bonus questions were too hard.  There was only one correct response out of sixty possible (20 participants).  Oh well... I'll try to make them a little easier next time.

Let's get to what you're all waiting for... the contest winner.  Drum roll please... 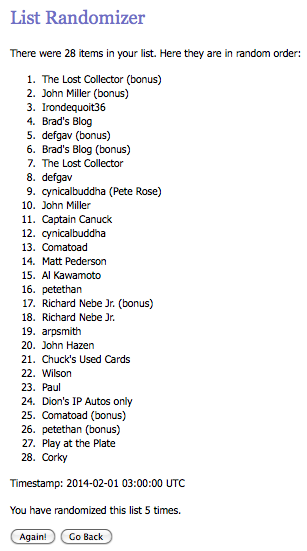 Congratulations The Lost Collector!  Email me your address and I'll get that 1996 Denny's Hologram set shipped out to you early next week.

Happy Friday and sayonara!
Posted by Fuji at 7:30 PM 2 comments:

Interested in a free set of Denny's Holograms?  If so... click here and enter my first contest of the new year.

It's pretty simple to enter.  All you need to do is follow my blog and tell me your favorite player in the 1996 Denny's Hologram set.  I have also provided a few bonus questions if you're interested in winning additional entries.  And just for taking the time to read this very short post... if you leave a comment below, I'll give you one more bonus entry.

The contest ends tomorrow at 3pm (PST).  Best of luck and thank you for taking the time to read the blog.

Happy Thursday and sayonara!
Posted by Fuji at 9:00 AM 7 comments:

My First Contest of the Year

It's been close to three months since my last contest, but it's time to get back into the season of giving and share some of my cardboard wealth.  Over the weekend, I attended a card show and picked up several 1996 Denny's Hologram sets.

The Cardboard Gods must have been reading my blog, because I just so happened to write a post a few weeks ago on these awesome cards.

If you enjoy them as much as I do, here's your chance to own the complete twenty-eight card set.  The checklist contains a solid collection of players, including several of my favorite players:  Greg Maddux, Tony Gwynn, Frank Thomas, Hideo Nomo, Ozzie Smith, and Kirby Puckett. 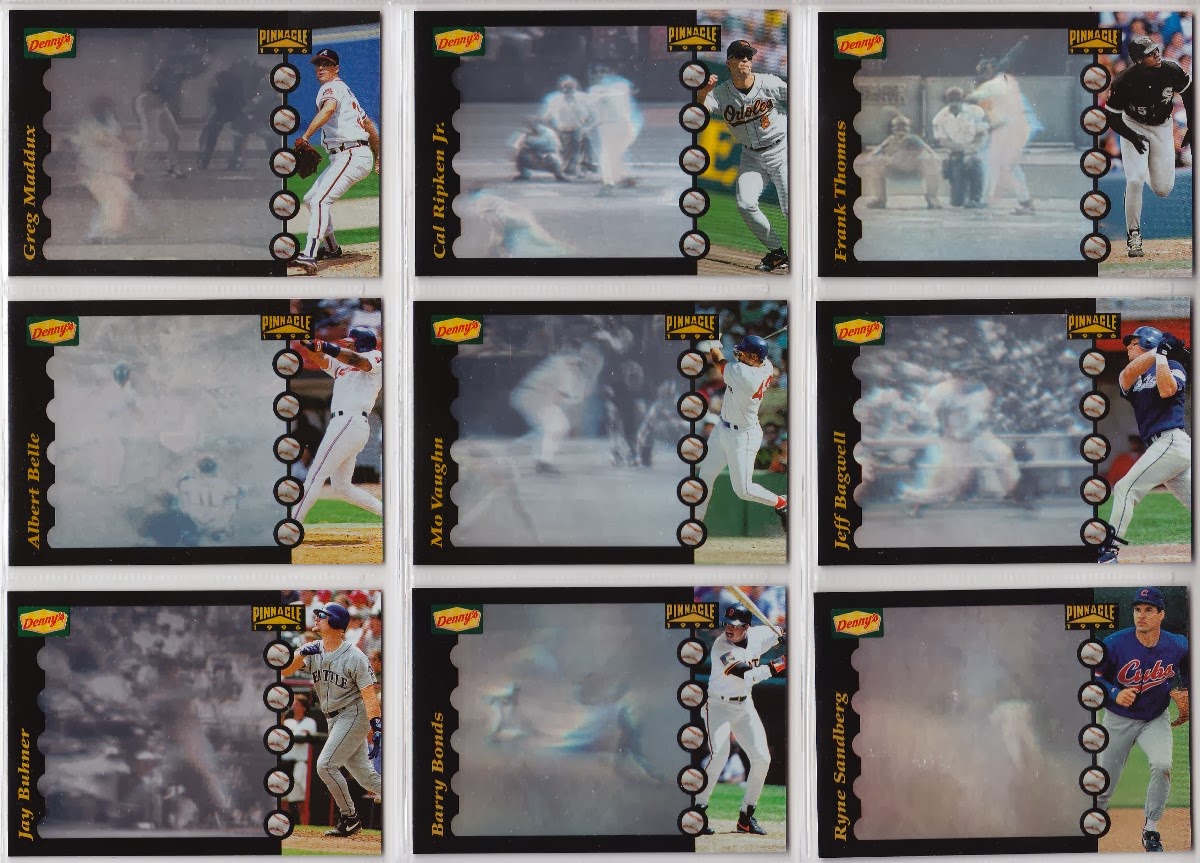 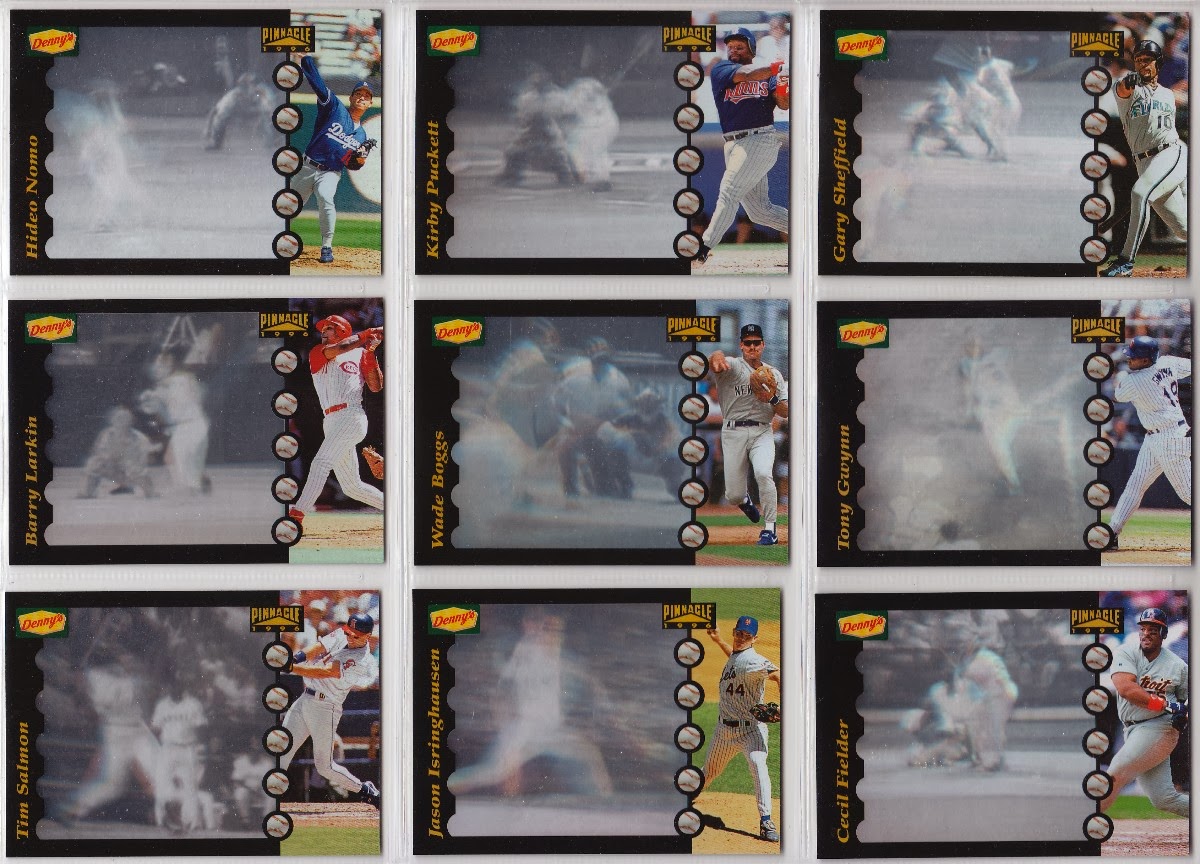 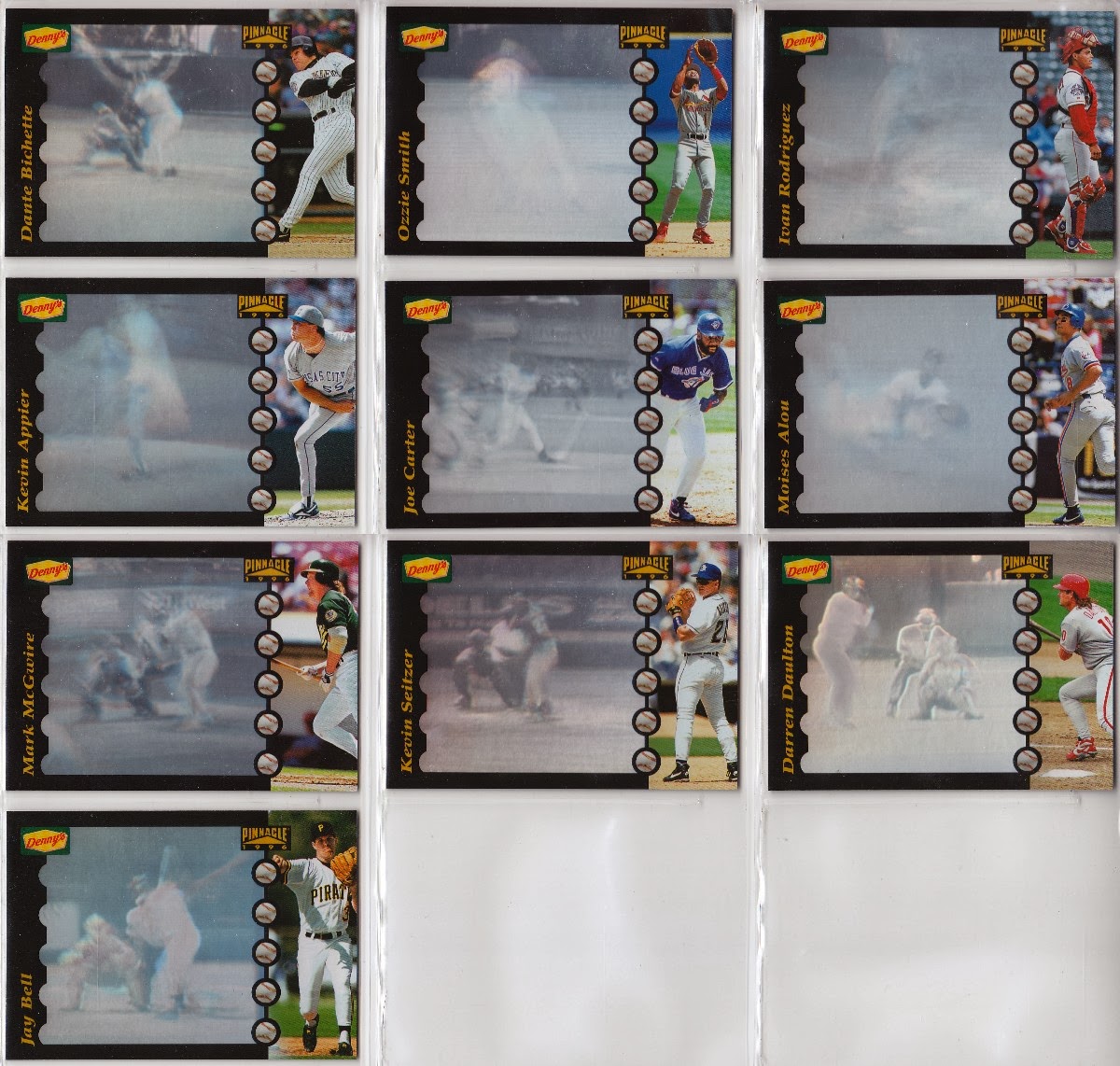 A.  Follow my blog and (in the comments below) tell me which of the twenty-eight players (in the set) is your favorite for one contest entry.

B.  At the card show, I stood at this guy's dime boxes for nearly three hours and purchased 380 cards.  How many of those cards were new additions to my Tony Gwynn binder?  Anyone who guesses correctly will receive an additional contest entry.

C.  There were a few vintage cards from that dime box purchase too.  Guess the year of the oldest card(s) I picked up.  Everyone who guesses correctly will receive an additional contest entry.

D.  And I'll give you one final opportunity to earn a bonus contest entry.  In my card show post, I showed off nine of the 380 dime box cards.  One of those nine was a card on my top 10 wantlist.  What card do you think I'm talking about?  Click here to see the post.  Everyone who responds with the correct answer will receive an additional contest entry.

I'll post the answers to the bonus contest entries this Friday at around 3pm (PST), so you have between now and then to get submit your responses.  This weekend, I'll throw everyone's entries into random.org and hit randomize five times.  The person on top wins the set.

Best of luck!  Happy Tuesday and sayonara!
Posted by Fuji at 9:00 AM 20 comments:

Yesterday, I attended the Serramonte Mall Sports Cards, Toys, and Collectibles Show.  It's my favorite show of the year, because it has a little bit of everything.  But if you know me well enough, then you probably know that my favorite thing to dig through are dime boxes and quarter bins. 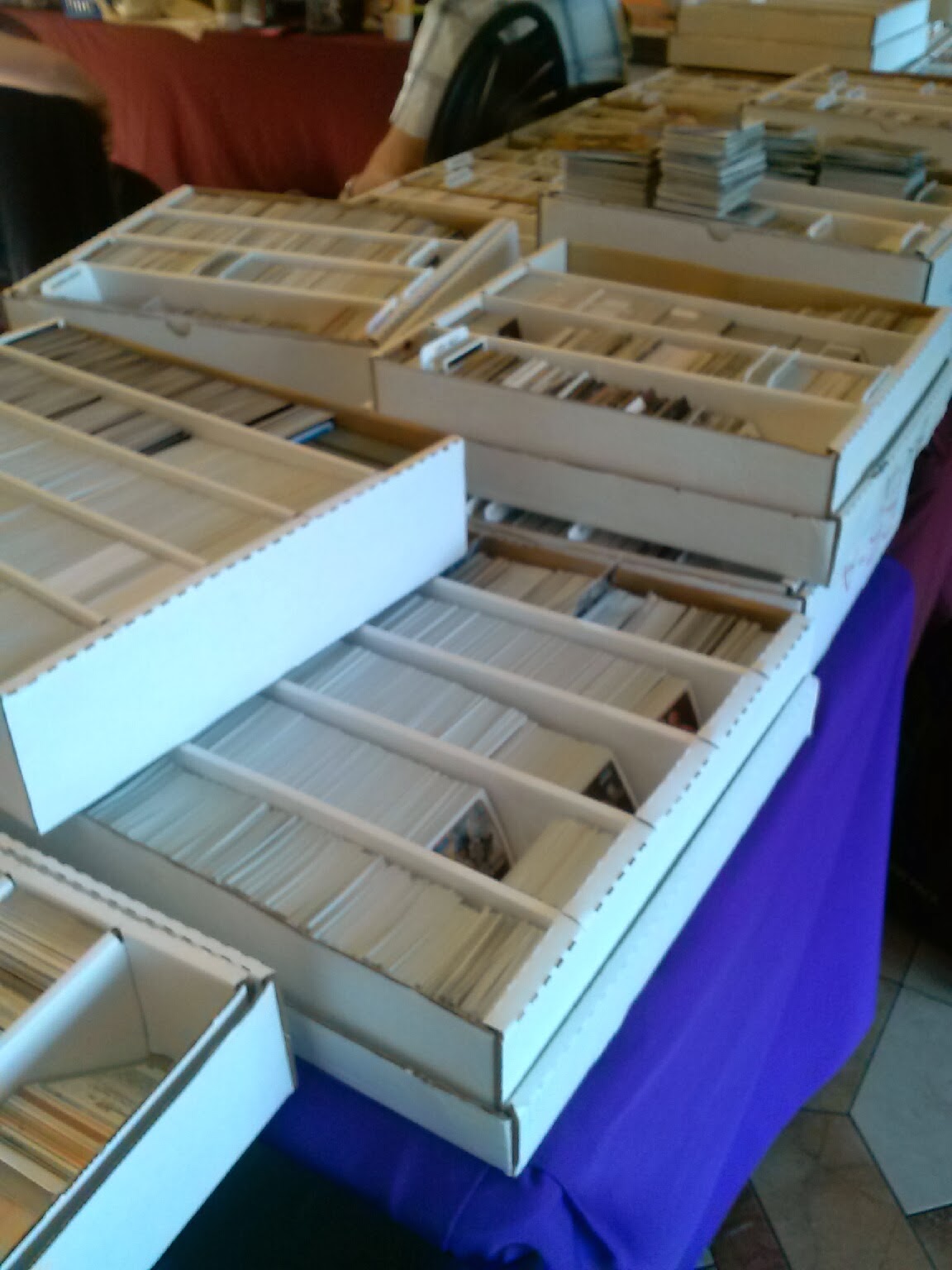 The first thing I did was look for my favorite vendor, who unfortunately didn't set up this time.  However, I found another guy with tons of dime boxes and spent close to three hours standing around his tables.  I would have stayed longer, but my legs were too sore.  When I was finished there were 380 inserts, rookies, parallels, promos, and vintage cards stuffed into the 550 count box I brought:

This purchase added cards to a bunch of different collections.  To save time, I scanned a few cards to show you the diversity: 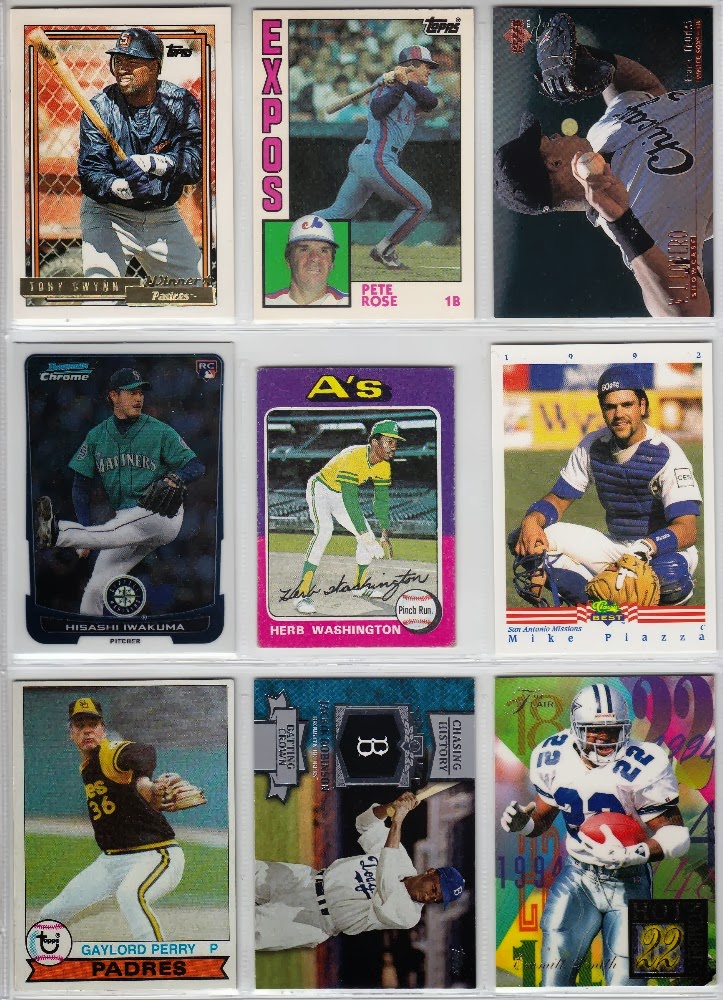 After that I went back to my buddy's table and hung out with him for a little bit before venturing out again.

Another vendor I usually buy stuff from was dumping a bunch of stuff at ridiculous prices.  He had several dollar boxes with pretty cool sports memorabilia.  That's where I found this media guide that actually contains some information on Tony Gwynn prior to his rookie season.  It's a nice addition to my San Diego Padres PC. 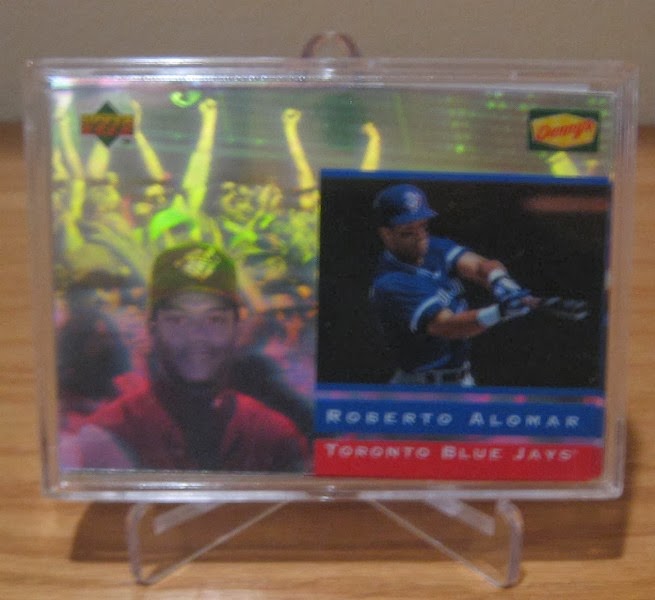 I also grabbed this set off of his table.  I'm not sure if I have it already, but I'm a sucker for cheap oddball sets.  If you like that sort of stuff too... stay tuned, because there's more to come. 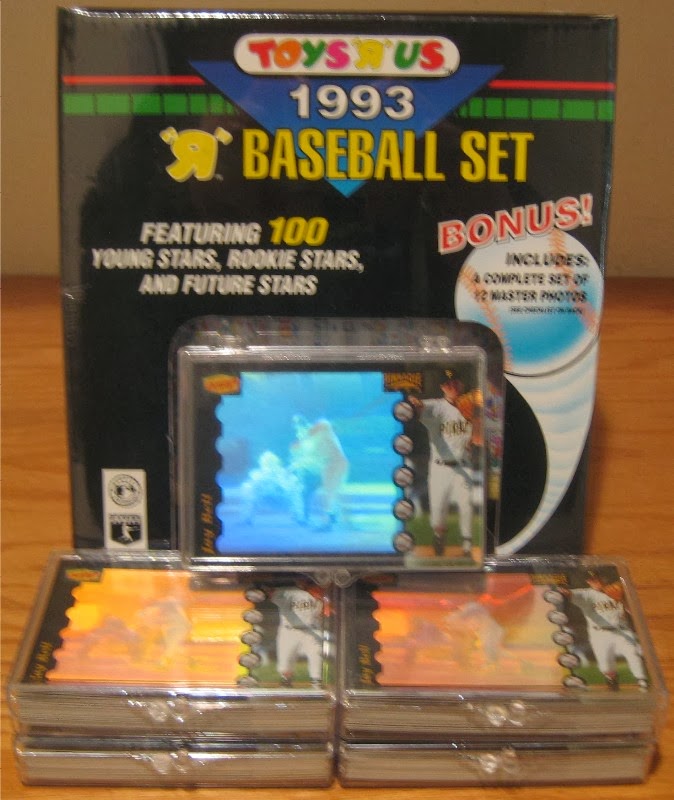 This guy who regularly sets up at the De Anza Flea Market was there too and he always takes care of me when it comes to cheap 90's cardboard.  I immediately noticed the Denny's sets and was going to offer him $2 for one of them.  He told me if I bought all of them, I could have them for 75¢ each.  I asked if he'd throw in the Toys R' Us set for an even $5 and he said "deal".

But I wasn't finished at his table.  He too had cheap cards for me to dig through. 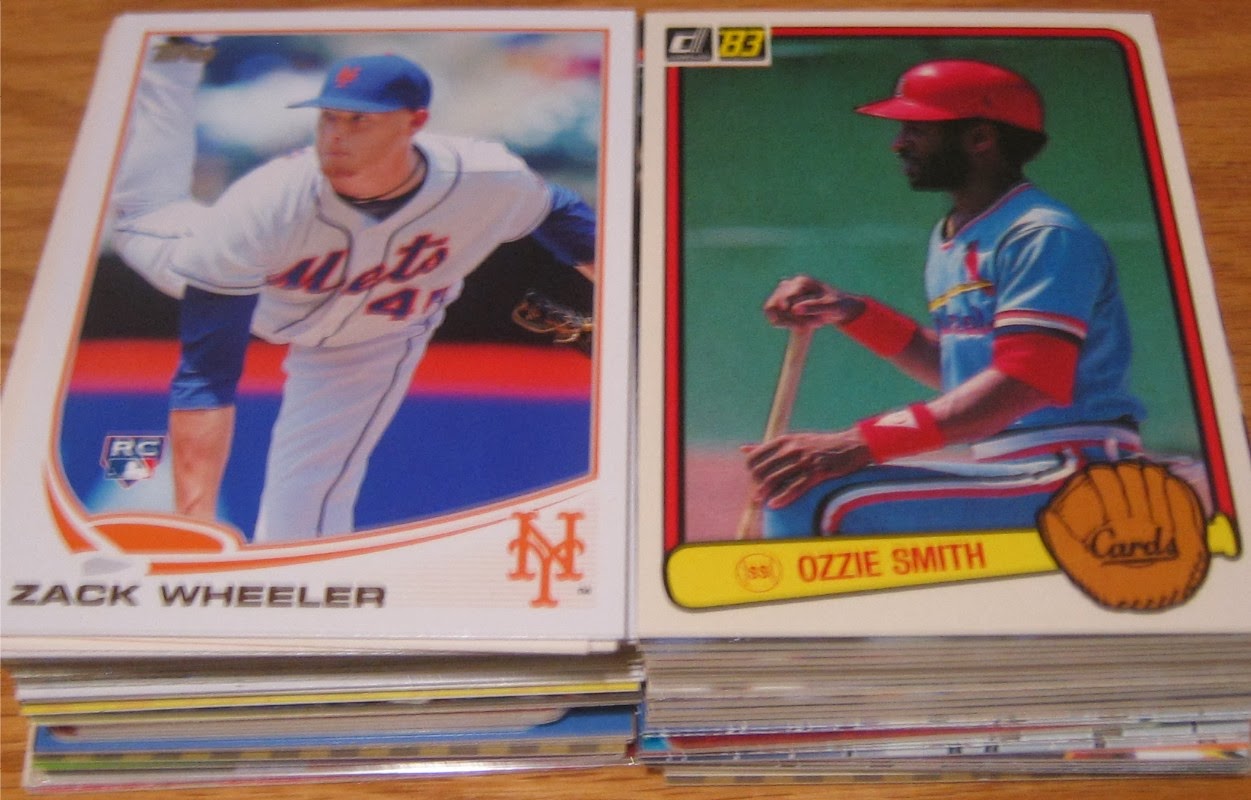 Only this time they were cheaper than a dime.  His box was marked 14 cards for $1, so I grabbed $5 worth.  Same story as the dime boxes above... 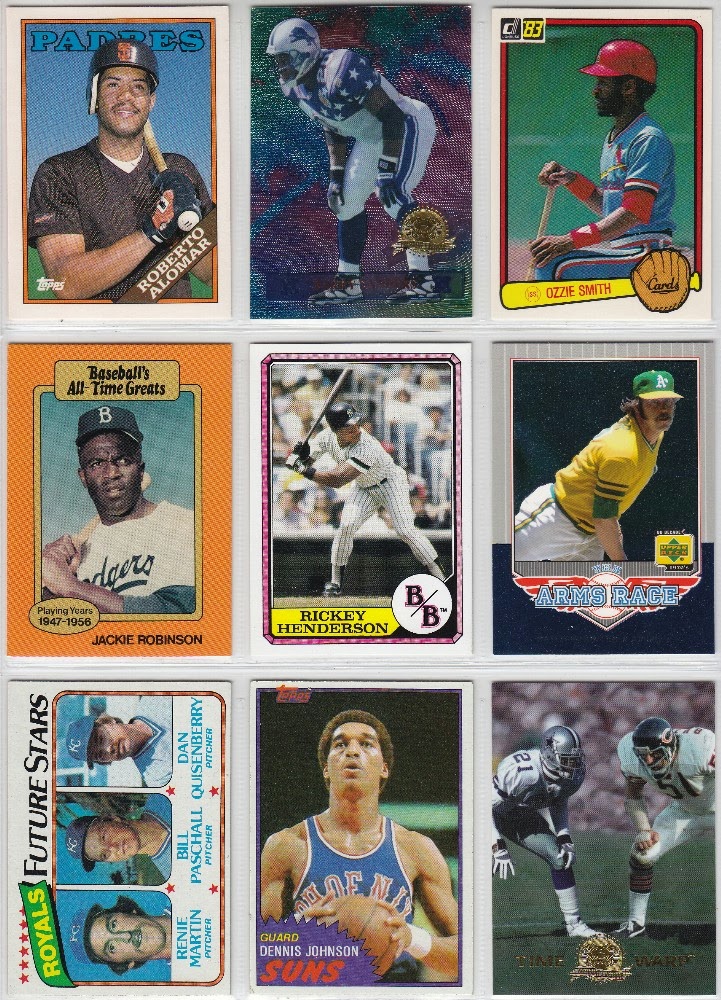 I don't have time to scan everything, but here's a sampling of some of the new cards added to my PC's.

My final four purchases took place at my good buddy Mike's table.  He's the guy I grab Shark's autographs with... and the same person I set up at the flea market with.  He rents out some of his space at Serramonte to two other guys:  Ben and Tony. 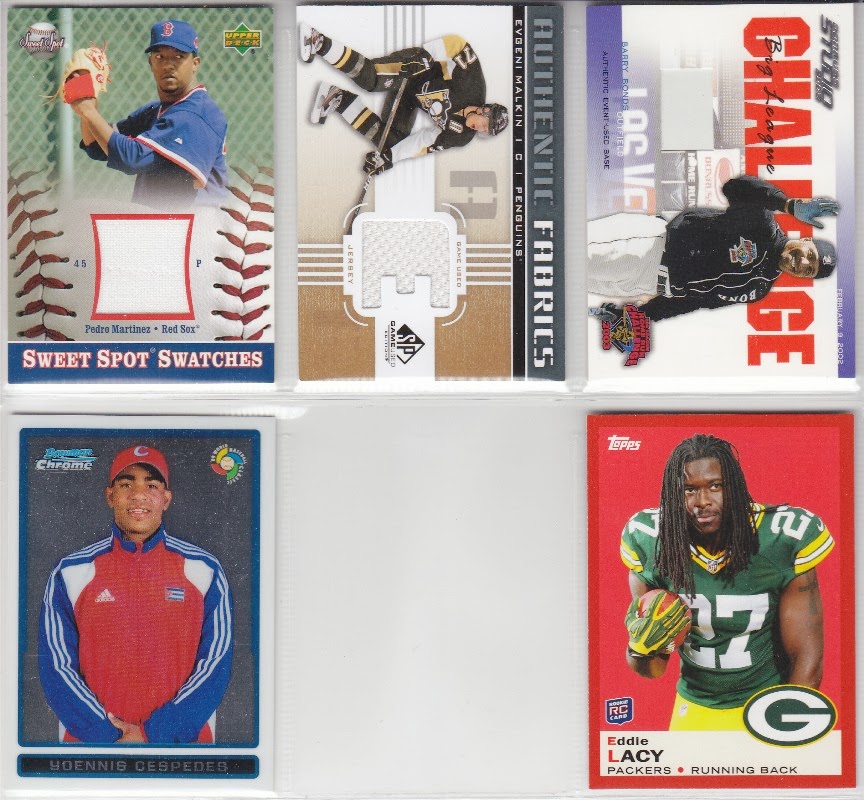 I was bored waiting around, so I started digging through Tony's boxes.  His stuff was broken down into two categories:  $1 and $2 cards.  He told me he'd take 50% off his price, so I pulled these five cards out of his $2 bin.  I'm pretty sure that's my first Lacy rookie card and I'll buy Malkin and Bonds memorabilia cards for a dollar any day of the week. 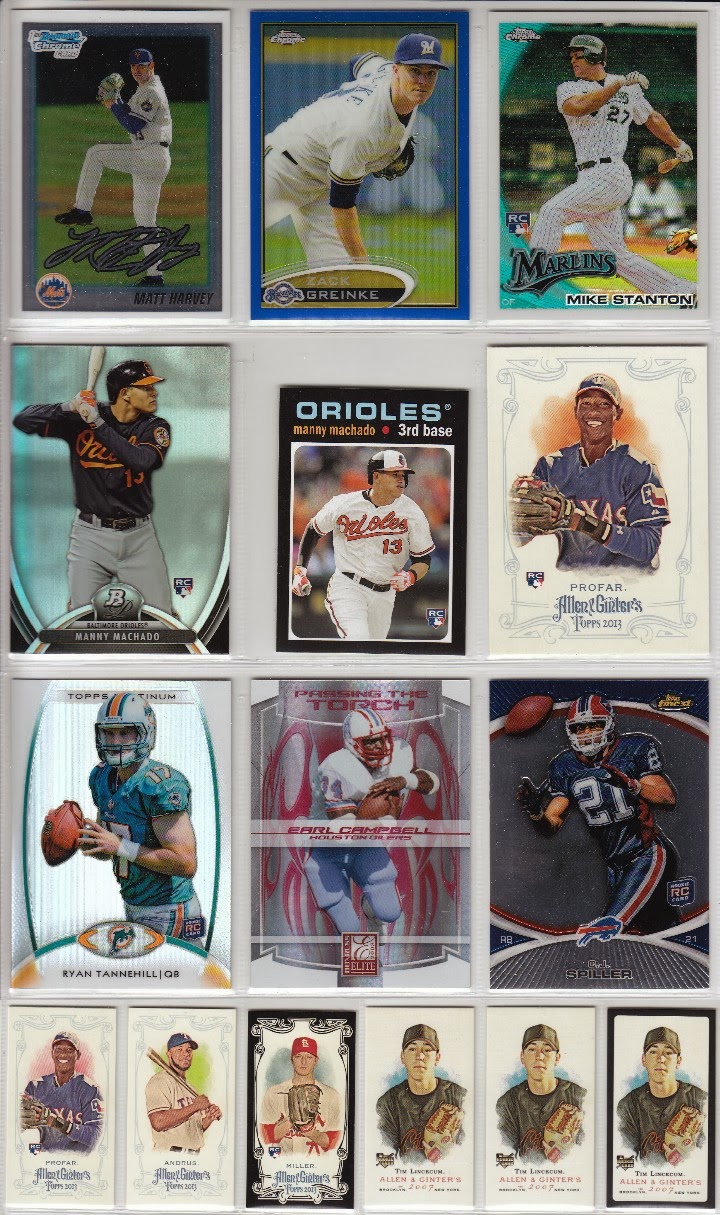 When I was finished with his $2 bin, I started into his $1 cards.  When the dust settled, the sale averaged out to 3 cards for a buck.  Nothing earth shattering, but a few new rookie cards for my collection. 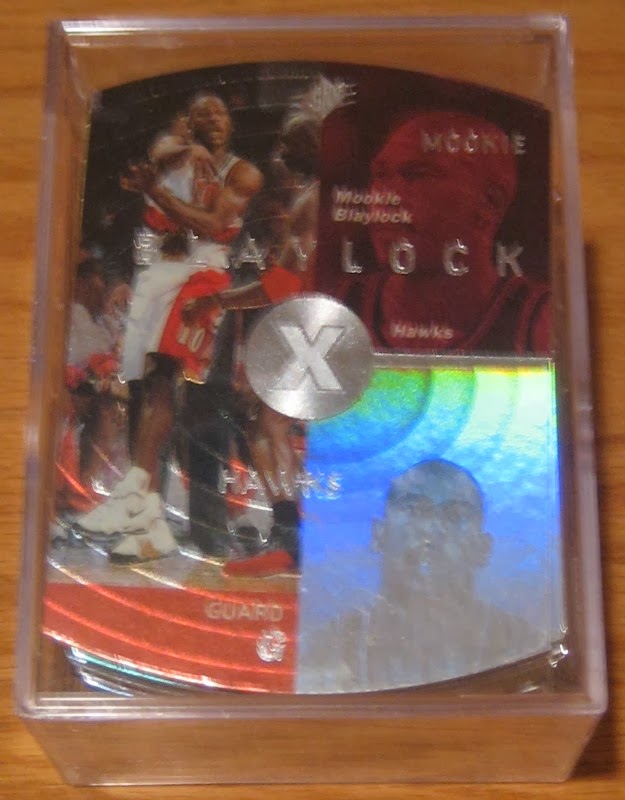 I almost went home without these final two purchases, because neither one of us wanted to budge in terms of pricing.  Ben didn't really want to sell me this set for this price and I had no intention of paying more than $10 for a set that I really don't need.  Plus I was running low on funds after a long day and just wanted to go home.

But at the last second, we created a package deal that included a Pablo Sandoval autograph I wanted and the rest is history. 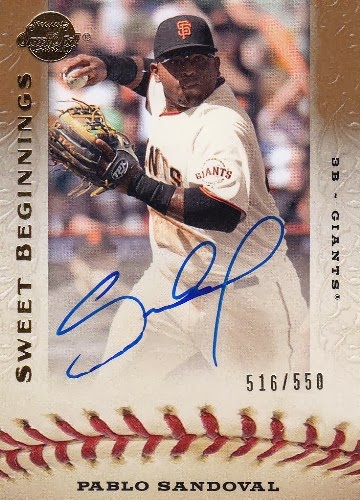 What can I say?  I'm a fan of fat guys who can hit for contact.

Sorry about the timing of this post.  Normally, I wouldn't publish a post this late on a Sunday evening, but I spent most of the afternoon organizing my binders after these purchases.

Stay tuned, because I'll be having a contest in the next week or so for some of my extra inserts and one of my Denny's hologram sets.

Oh!  One more thing.  I also completed a trade at the show.  Last July, I met a guy at the show who takes the time to read my blog and he sold me a bunch of cool stuff for my A's collection.  Anyways, he's a collector of Topps 206 minis and needed the Thurman Munson I pulled from my Black Friday box.  He gave me this 1975 Topps mini of Munson: 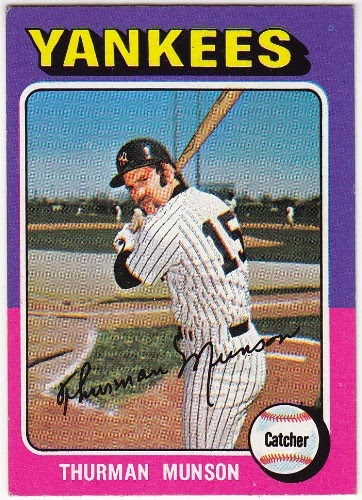 And in return, I'll be sending him his Munson either tomorrow or Tuesday.  Thanks for the trade James!
Posted by Fuji at 9:11 PM 6 comments:

I recently completed my second trade with Douglas over at Sportscards From The Dollar Store and it just so happens to be my second official trade of 2014.

Douglas offered to track down some 2011-12 ITG Enforcers autographs for the set I'm building the next time he went to his local card show and ended up picking up these two cards:

I'm slowly chipping away at this set... and with the Grimson and Semenko, I need only thirty-five more autographs.  If you have any available for trade you can view my wantlist: HERE.

The other card in the trade is this 2006-07 Upper Deck "Young Guns" rookie card of red hot Joe Pavelski: 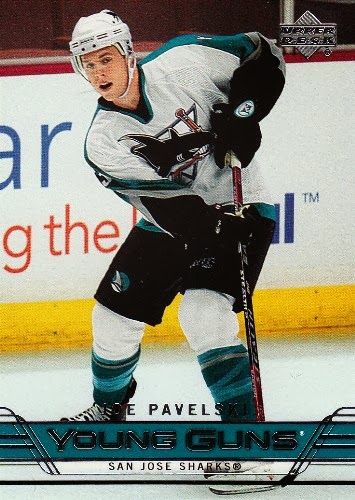 Not including tonight's game against Minnesota, Little Joe has scored seven goals in his last four games and is second in the league in goals scored.  This is a huge addition to my San Jose Sharks collection. 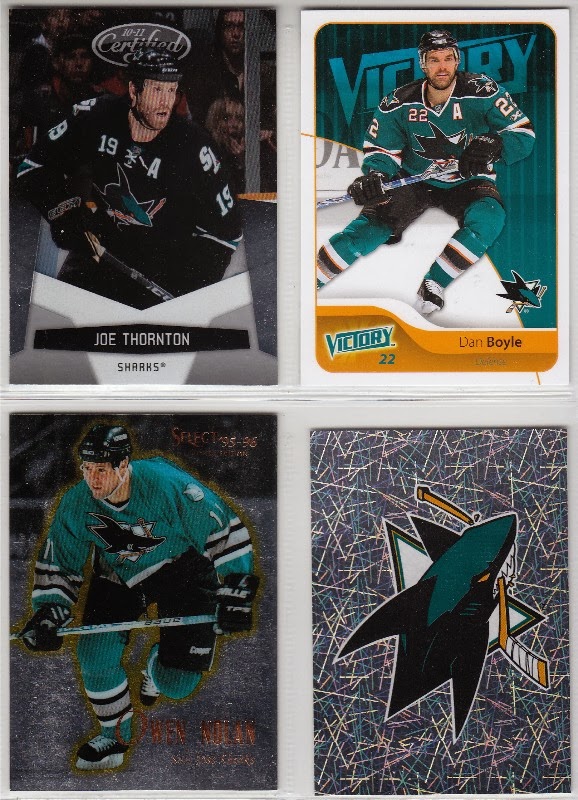 Douglas hooked me up with a few bonus cards, including a very shiny Sharks logo sticker from Panini.

Thanks for the great trade!  I shipped out your package on Tuesday, so hopefully it arrives sooner than later.

Speaking of shipping... I'm shocked by the shipping rates from the United States to Canada and vice versa.

Douglas did an amazing job of packaging up the cards in a padded mailer and it only cost him $2.20 (equivalent to $1.99 USD).  On the flipside, I sent his package in a PWE (plain white envelope) and it cost me $7.35 USD.  That's over three times the cost and it wasn't even in a bubble mailer.  Does anyone understand this price discrepancy?

By the way, before I get huge amounts of hate mail for using a PWE... I promise I received the okay from Douglas.  In fact, he actually suggested it to help reduce shipping costs.

Thanks again for the awesome trade Douglas!  Happy Saturday and sayonara!
Posted by Fuji at 10:03 PM 6 comments: