Judge me by my size, do you?

Yeah... I'm a huge fan of Yoda.  He's small, old, and awesome.  Just like these 1975 Topps minis I recently added to my collection:

I found them in one of my friend's boxes at the Great Mall Toy and Memorabilia Show over Memorial Day weekend.  The box was labeled "Three Cards for $20 or $7 each", but after four hours worth of negotiations... we settled on five cards for $15.

The fifth card isn't a mini, but it's a nice addition to my rookie card collection: 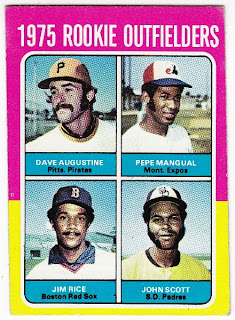 It took fifteen years, but it was nice to see Jim Rice finally make it into Cooperstown a few years ago.

I also picked up this huge A&G cabinet card for my Japanese PC: 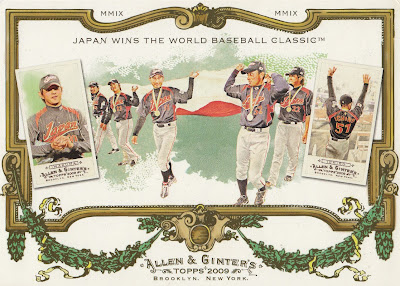 One of the dealers pulled out a stack of these oversized cards as I was going through his dollar boxes.  It just so happens that this card has been on my want list since its release in 2009.  He recognized me from past purchases and gave it to me for a buck.

The last two cards I picked up were freebies from another buddy.  He crashes on my couch whenever he's in the Bay Area for a show or flea market.  So every now and then, he'll hook me up with a few cards or autographs. 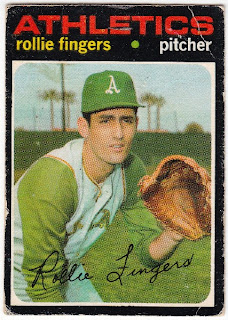 At first glance, you notice the typical wear and tear of a frequently handled 1971 Topps card.  But then I flipped it over and saw this... 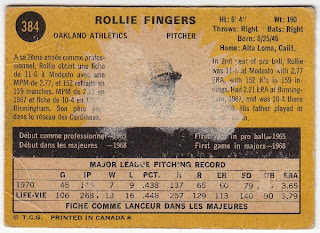 Two things struck me.  First, I loved the peeled off portion from the center of the card.  No problem... it'd make a nice addition to my damaged card collection.

But then I noticed that the back was yellow, instead of the usual green... which led me to the PRINTED IN CANADA text at the bottom of the card.  Heck yeah... my very first 1971 O-Pee-Chee card.  It might be damaged, but I ended up adding it my my vintage card binder instead.

And the last card I'll share with you guys is this weathered and worn down copy of a 1978 Topps Eddie Murray rookie card. 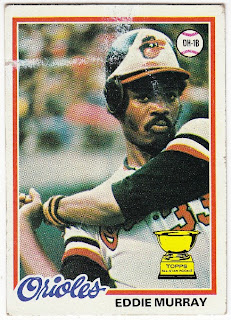 Ironically, I just purchased my first copy two weeks ago.  I'll be blogging about that card in a few days.  As for this one... it'll join Rollie in the vintage card binder, where cards aren't judged by their size or condition.

This Is Sharks Territory! 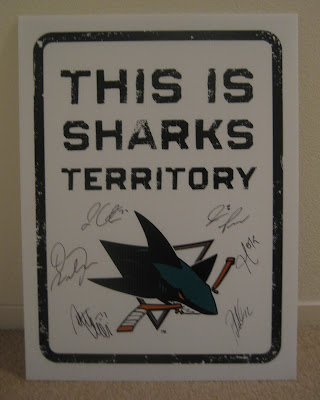 Another strong season.  Another trip to the playoffs.  Another playoff exit.

But before I wrap up this season, I thought I'd share my recent Shark hunting experience.  Last Saturday, I went out to the San Jose Sharks practice facility to grab some autographs and most of the players didn't disappoint.

I was able to start and finish my newest project, which is my second This Is Sharks Territory  sign: 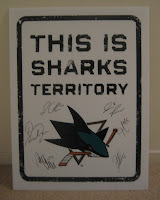 Last time, I focused on grabbing the whole team.  This time I wanted to reserve this piece for the biggest names on the team.

Whenever you see a fan walking around San Jose in a Sharks jersey... nine out of ten times, it'll be one of these guys.  They're the biggest names on the team and all five of them were cool about signing autographs after practice.

But the guy I was most excited about meeting was the Sharks' general manager, Mr. Doug Wilson.  This was the first time in I've had the opportunity to grab his graph and he did it with a huge smile on his face.  I always imagined him to one of those guys with a great personality and he definitely didn't disappoint.

In addition to the sign, I also had the pleasure of meeting Raffi Torres for the first time. 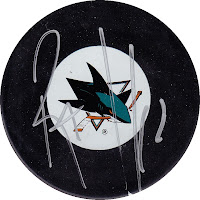 
I really disliked this guy when he played on Vancouver, but now that he's in San Jose... he's one of my favorites.  I didn't have any cards, so I pulled out my last blank puck.  I'm pretty excited about adding this puck to my collection.  Hopefully, the Sharks will work something out and sign him, instead of losing him to free agency.

And finally, I had one photo of Couture left from my previous trip to their practice facility. 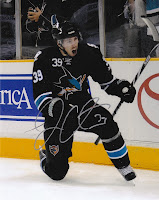 Thank you for another great season guys.  Enjoy your offseason, get some rest,  and let's try this again next season.

Happy Wednesday and sayonara!
Posted by Fuji at 7:00 AM 13 comments:

There was Taro Tsujimoto.

On May 28th, 1974... the Buffalo Sabres selected Tsujimoto in the 11th round of the NHL Amateur Draft.  However he never suited up for the Sabres that season, because he didn't exist.

Luckily for cardboard collectors, his hockey card isn't fictional.  Panini produced a card of Tsujimoto for its 2010-11 Score Rookies & Traded set.  They've actually held their value due to Panini's decision to limit the card's production (inserted into one out of every twenty factory sets).

I've wanted one of these since they came out, but wasn't willing to pay the ridiculous prices for a fictitious hockey player.  Last month, I picked one up off of eBay for $9.05 (+ $3 shipping).

Thank you Mr. Imlach (Buffalo's general manager at the time)!  Without your prank, there would be no Tsujimoto hockey card and I'd be $12.05 richer.

Email ThisBlogThis!Share to TwitterShare to FacebookShare to Pinterest
Labels: hockey

Imagine being offered a 3.6 million dollar contract to do something you love... something you've been practicing and perfecting the better half of your entire life.

Now imagine yourself turning it down to enlist in the United States Army, in order to serve your country. 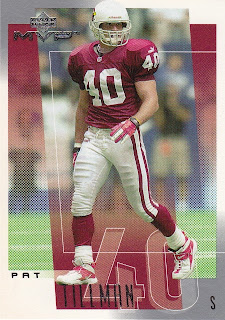 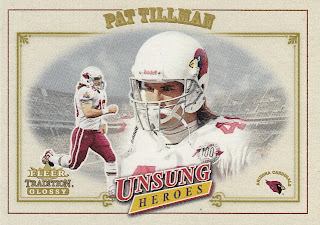 Today we honor Pat and all of the other men and women who died while serving in the United States Armed Forces.  As a civilian who has never served in the military, I wanted to thank all of you who have.  Freedom has never been free and it's important to recognize and remember those who have sacrificed and given their time and lives to protect and serve our amazing country.

I hope all of you are enjoying a safe, holiday weekend.  Happy Monday and sayonara!
Posted by Fuji at 9:00 AM 5 comments: 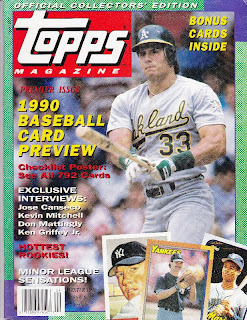 Did you collect baseball cards in the early 90's?  Do you enjoy reading articles relating to baseball cards?  Are you a fan of oddball cards, like the ones you find in magazines?

If you answered "yes" to any of these questions, then you might want to track down a few issues of Topps Magazine.  Each magazine contained articles on sports and trading cards, interviews, product reviews, and much, much more.  As a bonus, each issue had free trading cards and posters.

The magazine was published four times a year for four years straight (1990 to 1993).  Jose Canseco was featured on the inaugural issue back in the Winter of 1990. 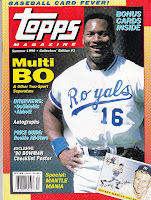 I remember owning a few of the issues back in the 90's, but over the years they were recycled.  Fast forward to a few years ago... and I started seeing these pop up here and there at the flea market.

That's when I decided to go out and track down all sixteen issues.

I was able to pick up most of the early issues without any problem... especially issue #6 with Barry Bonds and Bobby Bonilla.  It seems like every other week, I'll come across that particular issue at the flea market. 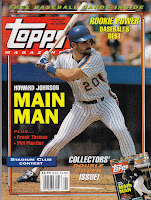 While putting the collection together, I also discovered that Topps released two covers for their 10th issue.  I found the Frank Thomas cover first, but the HoJo cover eluded me for almost a year. 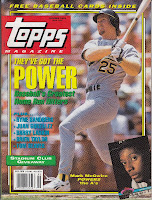 In 1993, Topps decided to include oversized rookie cards of Dennis Eckersley, Dave Winfield, George Brett, and Nolan Ryan.  These are some of the coolest oversized, oddball issues around.  I'm actually trying to track down extra copies of these issues, so I can rip them out and display them.

Sadly that year also marked the end of Topps Magazine.  It's crazy to think that these magazines are already twenty years old.  Like most of the cards produced during that era... Topps Magazine will never pay for anyone's college tuition.

But if you're looking for some cheap, cool cards and excellent bathroom literature, than I highly suggest you grab yourself an issue or two. 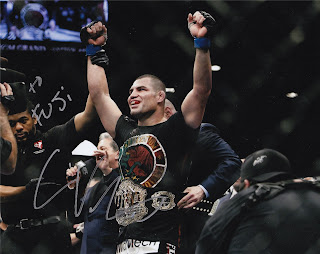 Last month, I had the opportunity to meet Cain Velasquez.  If you're not familiar with the guy, he's the current UFC Heavyweight Champion and tonight he'll be defending his title against Antonio Silva at UFC 160.

He trains less than 2 miles away from my doorstep over at the American Kickboxing Academy with several other UFC fighters.

My buddy was in town and wanted to have him sign a pair of UFC gloves, so I went out there with him.  We waited around a couple of hours, but it paid off.  Velasquez was a really nice guy and even personalized my photo.

My (Updated) Wall of Fame

I hate clutter.  Sometime during my childhood, I evolved into a neat freak and it's been a blessing and a curse ever since.  I'm pretty sure it has to do with my OCD and the fact that I love to sort and organize things... which is why collecting sports cards is the perfect hobby for me.

The problem is... I'm a "pack rat" too.  I knew I had to figure out something fast or I'd end up going insane.

My solution is to keep my house completely clutter-free, except for my office.  This is the one place I can relax and let myself go.  And over the past two years, that's just what I've done.  Here's a look at my main wall of memorabilia:

This is probably my favorite shelf.  My allegiance to the Athletics spans nearly four decades... longer than any of my other favorite professional sports teams.

I don't really watch basketball anymore and when I do, I cheer for the Golden State Warriors.  But I keep this shelf intact as a reminder of my childhood.  Plus, Kobe is still my favorite player to watch.

Useless fact:  this is the only shelf in my office that has more McFarlanes than SLU's. 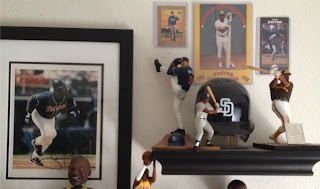 I know... it's a little empty.  One of these days, I'd like to add at least one more Tony Gwynn SLU or maybe a nice Padres bobble head. 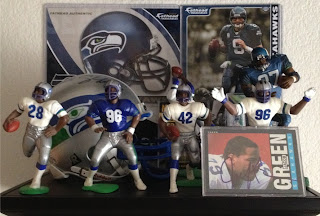 Mr. McFarlane, if you're reading this...  When are you going to make a Steve Largent figure?

Out of all of my PC's... my Sharks' collection is easily the largest and most cluttered.  The problem is, I'm always finding cool things to add to the shelves without getting rid of anything.  But that's the life of being a "pack rat".

Alright... time to spend the next two hours dusting all of the shelves.

Happy Thursday and sayonara!
Posted by Fuji at 3:00 PM 13 comments: