Battle of the Birthday Blasters

When the pandemic hit... blasters started disappearing off of retail shelves faster than hand sanitizer and toilet paper.  Ultimately this didn't really impact me, because I haven't seen fully stocked shelves in the card aisle at my local Targets and Walmarts in years.  In fact... I've written posts about how I'd have to travel to Portland and Vegas to find blasters in the wild. 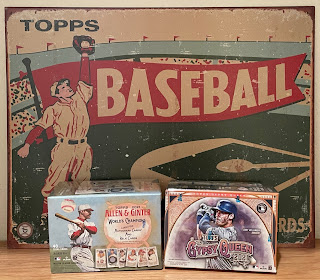 Recently... I've actually started seeing blasters on Target's website... so I scooped a few up and decided to bust open a box of Gypsy Queen along with a box of Allen & Ginter for my birthday (which isn't actually until tomorrow).
I figured I'd have these two blasters battle it out using the following scoring guidelines that were created to fit my collecting interests: 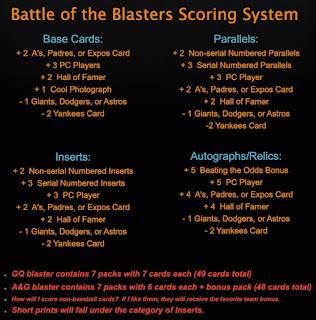 My original plan was to go pack by pack... but unfortunately these boxes don't have an equal number of packs.  Luckily when you factor in A&G's bonus pack, Gypsy Queen only has one additional card in their blaster... which I assume won't make too much of a difference.
Instead... I'll break down the blasters into the four categories:  base cards, parallels, inserts/short prints, and autographs/relics.
Are you ready to rumble?  Well... it's time.  Fight!
Round 1:  Base Cards 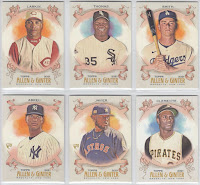 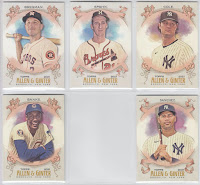 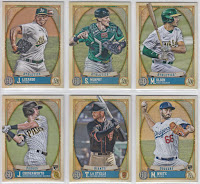 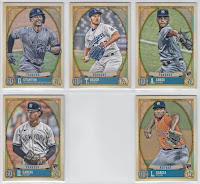 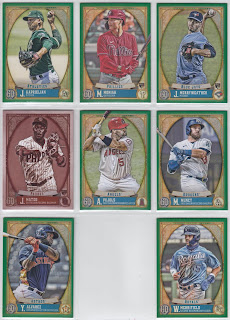 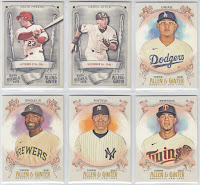 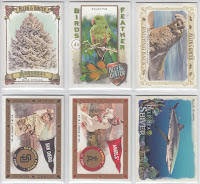 Trout (+2) and Bogaerts (+2)
Gypsy Queen:  +4 Points
Gypsy Queen (Round 1 + 2 +3):  +21 Points
Allen & Ginter made it obvious that my point system is flawed.  If I ever do this again, I will reduce the bonus points awarded to inserts and parallels.  These days Topps pretty much inserts two inserts/parallels into each pack of A&G and at least one into each pack of Gypsy Queen.  This gave A&G a huge advantage... which led to a landslide victory.
I was going to give bonus points to the Trout insert, because I really like that card and I only own a handful of his inserts.  But in the end, it wouldn't have made a difference anyways.  If I ever do something like this again, I will probably award points to favorite cards and possibly key rookies.
The final round was cancelled due to zero hits being pulled from these two blasters.  So here's the final score in this year's Battle of the Birthday Blasters:
2021 Allen & Ginter Blaster:  +45 Points
2021 Gypsy Queen Blaster:  +21 Points
As with any box purchased and opened, there's going to be risk involved.  I definitely did not pull what I consider to be $41.54 worth of cards.  However there was value in the entertainment of opening packs and sorting cards.  It also provided cards for future blogger care packages.  So I'm not going to complain about this little birthday present to myself.
Happy Tuesday and sayonara!
Posted by Fuji at 3:00 PM 21 comments: 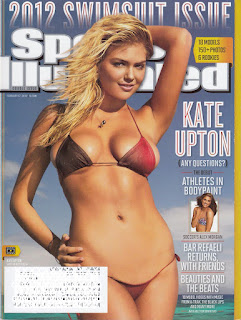 Alex Morgan is gorgeous.  Not sure when or where she first popped up on my radar, but I'm guessing it had to do with here body paint photographs inside this 2012 issue of the Sports Illustrated.
This is a family friendly card blog, so I'll hold off on showing scans of her from the above magazine.  Instead... how about the three card collection I've built over the years: 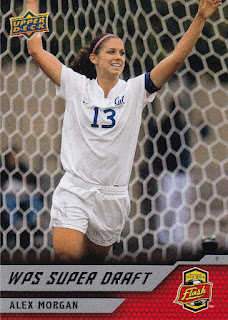 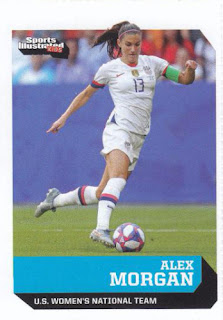 2019 Sports Illustrated for Kids #858
Over the summer, a few bloggers showed off their 2021 Parkside Collectibles NWSL box/pack breaks.  After looking over the checklist, I discovered she has a card (#114) in the set.  That's why I grabbed this box/pack when I found it at my local Target:

The box contains one pack of 25 cards.

Out of the twenty-five cards, six are parallels or inserts and the remaining nineteen are base cards.  A complete set contains 200 cards, which meant I had about a 10% chance of pulling her.
In the end... I was unsuccessful.  In fact, there were only two players in the pack that I recognized: 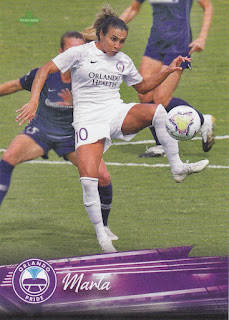 2021 Parkside Collectibles NWSL #22
Marta has made a name for herself representing Brazil in numerous World Cups and Olympics.

2021 Parkside Collectibles NWSL #84
Raisa Strom Okimoto is a familiar name, because I saw this card over at Torren Up Cards a few weeks ago.  I immediately searched her up and discovered that she's from Hawaii and graduated from UH.  Unfortunately... if you look closely at the card back scan, you'll notice this card suffered from being diamond cut.  But don't worry... there's a happy ending to this story.  Stay tuned.
No way I'm gonna scan every card in the pack.  However I did take the time to show off the four Team USA players I pulled: 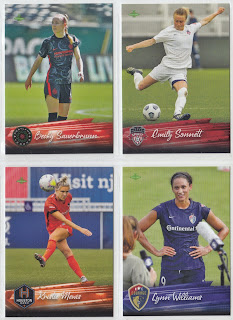 And the parallels and inserts: 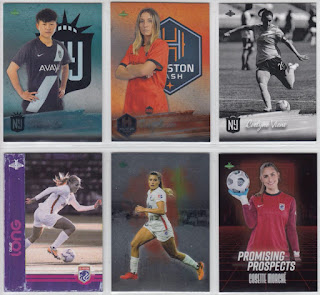 As for the happy ending... I received a PWE from Kenny last week that contained the Okimoto he pulled a few weeks ago: 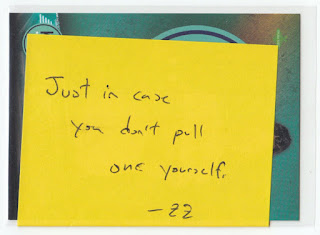 The copy he sent was flawless:

2019 Choice New York-Penn League Top Prospects #23
2019 Choice New York-Penn League Top Prospects #24
Baum and Davidson were the A's first two picks in the 2019 MLB Amateur Draft.  A quick Google search revealed Baum is playing in the Arizona League, while Davidson is in Midland with the Rockhounds.  It'll be fun to track these guys to see if they have the talent to play in The Show.
Thank you Kenny for the PWE!  Plus thanks to any of you who stuck around to read a women's soccer post.  And if you clicked on this post to see Kate Upton, this card is for you:

Topps Variations... Love Them or Leave Them?

One week down.  Thirty-four to go. 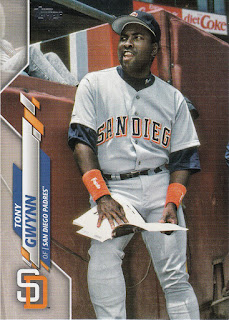 2020 Topps Legend Variation #248
Sorry I've been missing in action the past few days.  The first week of the school year is always a little hectic, but for some reason this year seemed to take things to the next level.  I think it has to do with a pair of things:
#1:  We're back to a normal schedule.
#2:  We're back to teaching standard sized classes in-person.
The bottom line was last week was exhausting.  It was also extremely fun, exciting, and entertaining.  I averaged a little over ten hours a day on campus last week and almost eight hours of sleep each night... which meant a short vacation from the hobby.
Today I'm going to read some of the blog posts I missed over the past week, but in order to balance out my life... I've decided to dedicate exactly two hours of my Sunday.  So I apologize in advance if I don't read and comment on all of your posts from last week.
Now that I've finished another chapter of my life update, let's check out some cards.  This past Thursday was World Photography Day.  The original plan was to show off a few cards featuring some nice photography, but that never panned out.
Instead I'll be showing off a photo variation of Logan Webb's rookie card:

2020 Topps Photo Variation #514
Webb has been the talk of the town the past month or so.  Since May 11th, he's gone 6-0 with a 1.64 ERA and the San Francisco Giants have won ten of the eleven games he started during that time.  Hopefully the Oakland A's can get to him this afternoon in their rubber match.
This card is one of the many cards donated to my collection over the past six months by Reader X... who has been a supporter of my blog for several years.  At first glance, this card looks like your typical base card.  However it was sitting in a stack of San Francisco Giants inserts and parallels.
I thought this was kind of weird, so I decided to look him up on COMC and that's where I discovered that this was one of those photo variations.  The sad thing is I never would have noticed this had I pulled it from a pack.  I realize that Topps prints different codes on the back of their cards to help collectors identify variations, but the print is way too small for my poor eyesight.
This motivated me to start looking up all of Topps "base" cards he sent.  Here's are some other variations I discovered...

2020 Topps Advanced Stats Variation #97
This variation is much easier to identify due to the different statistics listed on the back of the card.  I'm not exactly sure how long Topps has been doing this, but I found a pair dating back to 2014:

2014 Topps Update SABR Variation #US-143
My favorite Topps variations are the ones featuring MLB legends like these two:

2020 Topps Legend Variation #556
In fact... I picked up this card for my Tony Gwynn PC on COMC back in the beginning of May:

I just noticed that this card would have been perfect for my Back to School post last week... since he's holding a book of some sort.  Anyways... this purchase took place right around when I received my first package from Reader X, so there's a good chance I was motivated to buy it after seeing the above Reggie and Winfield.
Thank you Xavier for providing all of this blog material!
Here is today's question of the day...
What are your thoughts on Topps and their flagship variations?  Love them or leave them?
I think the only ones I've actually gone out of my way to purchase are the "legends".  I like them, because they are easy to identify and I enjoy collecting hall of famers.  I have no problem adding the SABR and photo variations to my player/team collections.  But sadly... most of those fly under my radar unless they are pointed out to me.
Time to get this post published and start catching up on all of those blog posts I missed out on last week.
Happy Sunday and sayonara!
Posted by Fuji at 9:00 AM 20 comments: