Not last weekend, but the weekend before... I hit up the Branham High School Flea Market.  It's another one of those once a month flea markets located in the parking lot of a local high school.  It's smaller than the De Anza Flea Market, but usually has more sports memorabilia.
Purchase #1:  Magazines $2
The first dealer in the first row is a regular vendor who has plenty of regulars looking for sports memorabilia.  He had a bunch of magazines for a buck or two.  I grabbed two $1 magazines... 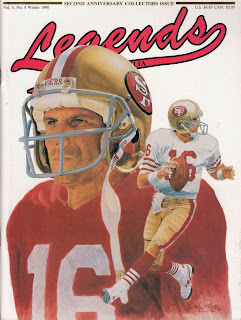 The first one is a Legends magazine from the 90's.  Each issue comes with 9 cards and three postcards that a printed on high quality card stock.
Here's a look at the 9 cards in this issue: 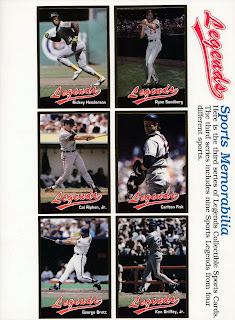 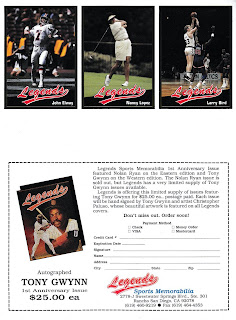 Solid lineup here.  Nine athletes.  Nine hall of famers.  There's also an offer for readers to purchase a Tony Gwynn signed issue for $25.
If you'd like a closer look at the autograph, I bought one back in 2013 for $17.16 on eBay.
And here are the three postcards in this issue: 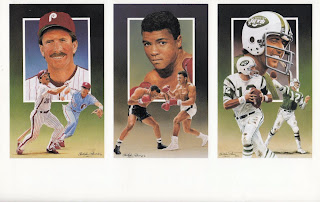 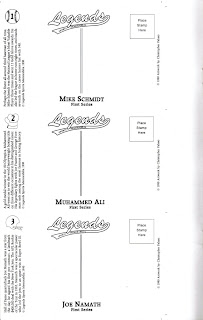 Three more athletes.  Three more hall of famers.  Not bad for a buck, right?
The other magazine I purchase is actually a program for the 1984 NCAA Men's Basketball Tournament: 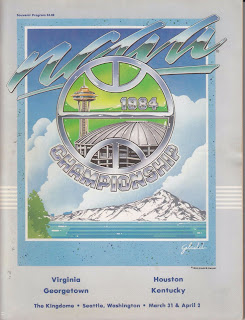 I'm not really into basketball these days, but this program is pretty cool.  That Final Four featured several future NBA players... most notably... Patrick Ewing and Hakeem Olajuwon. 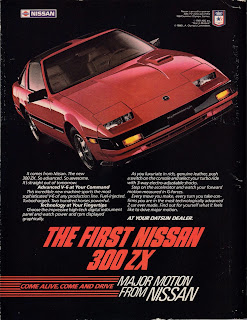 The back cover is pretty sweet too.  It featured the first 300ZX... which were popular for nearly two decades.  Not sure if any of my readers are car enthusiasts... but Nissan just released their latest Z this year (technically a 2023 model).
Purchase #2:  Quarter Bin Cards $2
The same vendor with the magazines also had several quarter boxes (or 5 cards for $1).  I picked out these ten cards: 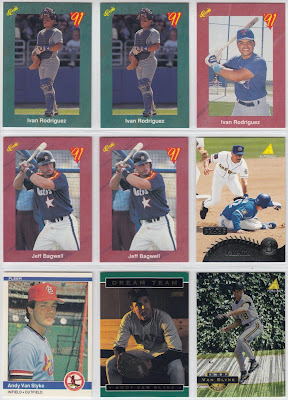 I've dug through his boxes before and always seem to walk away with at least one new Artist Proof or Dufex parallel for the collection. 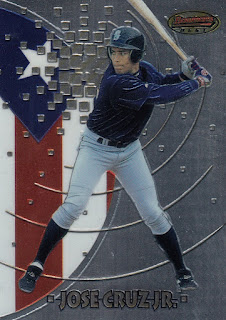 1997 Bowman's Best International Preview #BBI 19
I added this card to the stack, because there was a time when it was a pretty sweet pull.  Although it's a Bowman's Best card, it actually came out of a 1997 Bowman Series 2 pack. 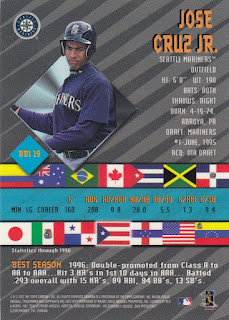 If you collected back in 1997, then you probably remember the hobby hype around this guy.  According to the January 1998 issue of Beckett Baseball, he was the 5th hottest player in the hobby: 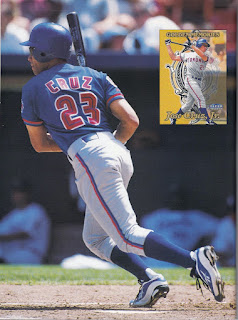 He was popular enough to grace the back cover of that very issue.  This parallel I picked up was listed in that price guide for $20.  Today it's 1/100th of that price.
Purchase #3:  Shoebox Collection $10 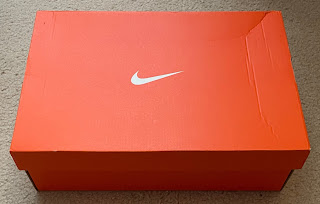 The final thing I grabbed from the first vendor were two boxes filled with baseball cards:

I wish I could report some hidden treasures, but these were pretty much a bunch of non-mint base cards.  I'll probably just take these into the classroom as samples for students.
Purchase #4:  Mt. Rushmore Coke Bottle $3
After dropping the boxes and magazines off at the car, I returned to the first row and stumbled across this massive collection of Coke bottles: 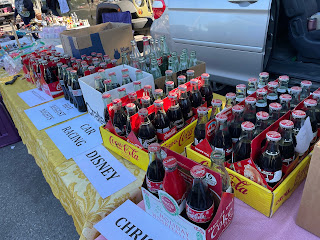 This lady had been collecting them since the late 80's with her husband.  They had tons of cool ones ranging from Disney to sports.   Most of the bottles were $3 each or $15 for a six pack. 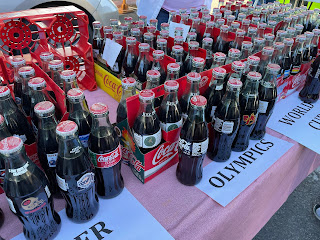 I considered buying a few different ones, but settled on this one for my classroom:

The uniquely shaped bottle commemorates the 100th Anniversary of South Dakota.  I think it's cool that the soda is still intact after thirty-three years.
Purchase #5:  Digable Planets Photo $1 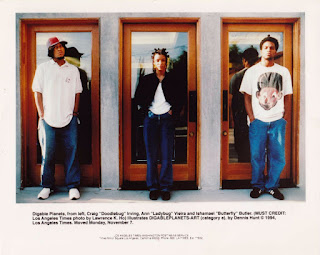 A few weeks ago, a Digable Planets song (Rebirth of Slick) came on while my students were working on a project.
One of them recognized the song and started singing it.  Figured she'd think this was cool, so I bought it for her.
Purchase #6:  Basketball Cards $10
My final purchase of the day was off of a guy who had several boxes of 90's baseball, basketball, and football inserts.  Every card was priced with what appeared to be current eBay prices.  I was kind of impressed with all of the effort he put into pricing his inventory.  You don't see that very often with flea market vendors in my area.
There were a small percentage of cards he didn't have priced.  Being the bargain collector that I am, I passed on the priced cards... but inquired about two basketball parallels. 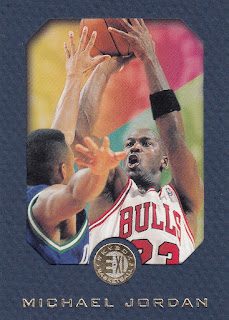 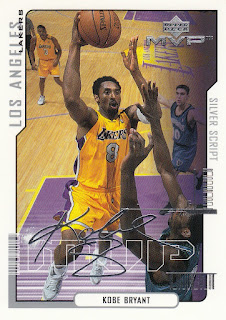 2000-01 UD MVP Silver Script #189
I offered $10 and he accepted.
That wraps up another trip to the flea market.   De Anza is this upcoming Saturday.  The plan is to get out there and walk around.  It's generally cheap entertainment, but gas prices are still insane out here. 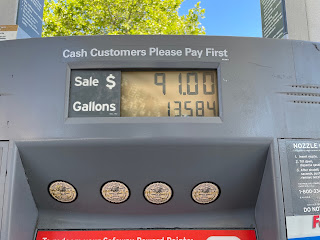 I miss the days when gas was only $3 per gallon.  Starting to think those days are a thing of the past.  Last week I paid $6.69/gallon.
What are you all currently paying for gas?
Happy Tuesday and sayoanara!
Posted by Fuji at 3:00 PM 19 comments:

The San Diego Padres are one of the six remaining franchise waiting to add the Commissioner's Trophy to their trophy case.  That's fifty-three seasons and counting... that some of their fans have been waiting for a World Series title.  In that time, they've only made it to the World Series twice... losing both times.  Even sadder is the fact that they've only made it to the playoffs six times.
To put things into perspective, the Los Angeles Dodgers have made it to the playoffs every year over the past nine seasons, have gone to the World Series three times, and won it once.
That being said... San Diego Padres fans do have things to be proud of.  We'll always have Mr. Padre.  They've had twelve hall of famers don their jersey at some point in their career.  And they've had a long line of successful relief pitchers... some of whom actually made a name for themselves in San Diego. 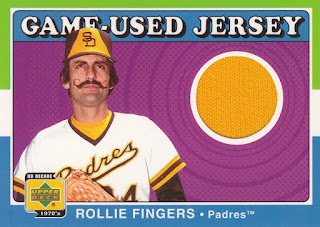 2001 UD Decade 70's Game-Used Jersey #J-RF
The first famous reliever in line is Rollie Fingers.  He signed with the Padres in December of 1976 and pitched four seasons for them.  During his time in San Diego, he led the National League in saves twice, was a one-time NL All-Star, and earned 108 saves (3rd in franchise history) during those four years.  Bruce Sutter is the only pitcher to save more games during that time frame. 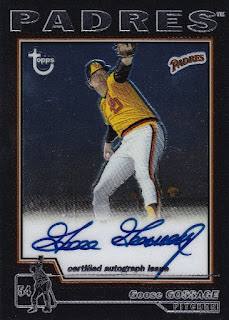 2004 Topps Retired Signature Edition Autograph #TA-GG
Then in January of 1984 the Padres signed Goose Gossage.  He spent the next five seasons in San Diego... recording 83 saves (4th in franchise history) and representing them twice at the Mid-Summer Classic. 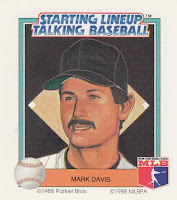 1988 Starting Lineup Talking Baseball #29
1990 Fleer All-Star Team #3
1990 Topps K-Mart Super Stars #14
Before the start of the 1988 season, the Padres shipped Gossage off to Chicago and handed over the closer duties to Mark Davis.  During his two years as the closer, he was a two-time NL All-Star and became the third player in franchise history to win the NL Cy Young Award (in 1989).

2017 Trader Jack McKeon Set #NNO
2017 Trader Jack McKeon Set #NNO
The Padres would have liked Davis to stay in San Diego, but after that award winning season... he was looking to become the highest paid reliever in baseball.  In short... he signed with the Kansas City Royals and over the next the next four seasons they used Craig Lefferts, Randy Myers, and Gene Harris as their closers.
Then Trevor Time arrived... 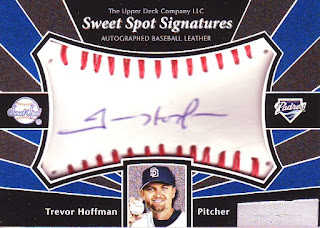 2004 UD Sweet Spot Signatures #SS-HO
One of the game's greatest relievers, Trevor Hoffman spent fourteen of his sixteen seasons in San Diego as their closer and saved a franchise record... 552 saves.  When he retired he was MLB's all-time saves leader... until Mariano Rivera broke it the following season. 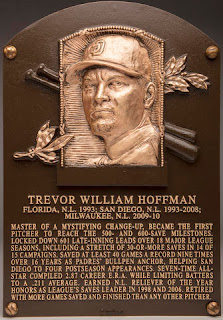 In 2018, he became only the third player in franchise history to don the Padres logo on his HOF plaque in Cooperstown.

Tony Gwynn and Dave Winfield are the other two.
In 2009, Hoffman signed with the Milwaukee Brewers which opened the door for another dominating closer in San Diego's long line of epic relievers... 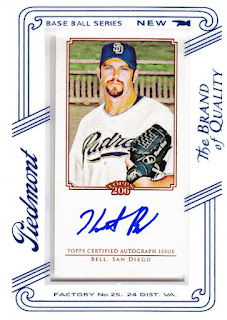 2010 Topps 206 Mini Piedmont Framed Autograph #TA-HB
That season, Bell led the National League in saves.  During his three full seasons as their closer, he'd rack up 132 (+ 2 in 2007) saves (2nd in franchise history) and represent the Padres every year at the MLB All-Star Game.
Sadly... in 2012 he left San Diego to play with the Marlins.  This kind of felt like a gut punch, because Bell actually wanted to play in San Diego... but they didn't want to pay him the big bucks he was worth.  Anybody else miss watching Bell sprinting from the bullpen to the mound?
That offseason, the Padres traded for Huston Street: 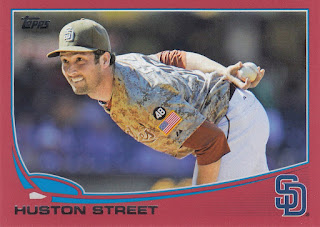 2013 Topps Target Red #549
He spent two and a half seasons in San Diego as their closer, earned two trips to the MLB All-Star Game, and accumulated 80 saves (5th in franchise history) before being shipped off to the Los Angeles Angels.
The next season the San Diego Padres went out and signed 4x MLB All-Star Craig Kimbrel: 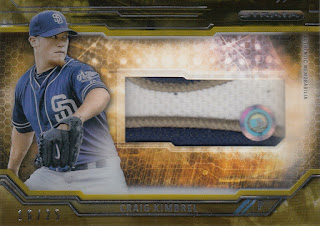 2015 Topps Strata Clearly Authentic Relic Gold #CARC-CK (#'d 16/25)
Unfortunately... he was part of the infamous 2015 rebuild that ended tragically with the Padres finishing in 4th place in the NL West.  That being said, he was one of the few bright spots for the Padres that season.  Even thought the Padres only managed to win 74 games that season, Kimbrel recorded saves in 39 of them.
And the story behind this gorgeous patch card... 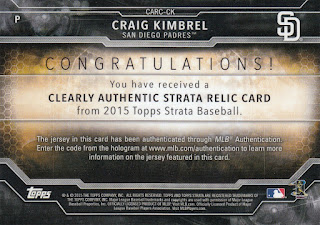 It landed in my collection last year as part of Reader X's insane care package.  I wanted to write a post back then, but missed the May 29th deadline.  What's significant about May 29th? 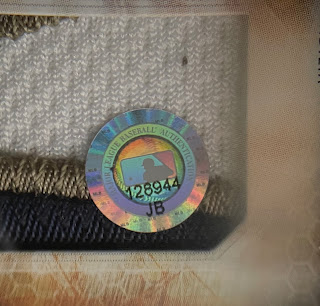 Well that's the beauty of this patch card.  It features the MLB authentication hologram which allows you to look up the exact game the jersey was used in.

In this case, Kimbrel wore it on May 29th, 2015.  He wasn't given the opportunity to earn a save, but he did end up with his first win of the season thanks to this walk-off grand slam by Derek Norris:
It was one of the highlights for the Padres that season.
In the offseason Kimbrel was shipped off to the Boston Red Sox... as the Padres tried to add some prospects to their farm system.  Ever since he left... the closer position has been a revolving door in San Diego.
This post was originally written on April 9th.  Two days earlier, the Padres traded for Taylor Rogers who appears to be their closer for 2022.  Hopefully he'll be the next guy in the franchise's long line of successful relief pitchers.
Thanks Xavier for the very cool Craig Kimbrel patch card!  It's not every day I add a relic card this beautiful to the collection.  Plus, I love that I was able to look up and see which game he used that jersey in.  This should be the standard for all game-used memorabilia cards.
Happy Sunday and sayonara!
Posted by Fuji at 3:00 PM 9 comments: