Flea Market Finds #151: Some Rare Air and Something for Mom

Two years and four months or eight hundred fifty-four days.  That's how long it's been since I last purchased something at the De Anza Flea Market.  Well... at least according to my records.
For over a decade, De Anza has been my favorite monthly flea market, but they were shut down since March 6th, 2020 due to Covid.  This past weekend, they reopened.  It wasn't exactly back to normal in regards to number of vendors.  However there seemed to be lots of customers eager to walk around and spend money.  As for sports memorabilia, there were the same vendors that normally set up.
Purchase #1:  Michael Jordan Pre Rookie Magazine  $2 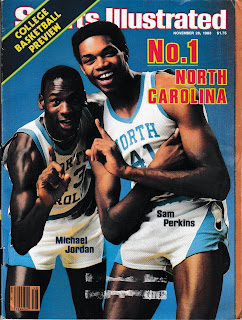 Sports Illustrated 11/28/83
My first purchase was my best purchase in regards to value.  This copy of Sports Illustrated was Jordan's first cover and it's an issue I've been seeking for a long time.  I actually owned a copy when I was a kid.
This particular copy isn't in mint condition.  The mailing label has been ripped off and there's some wear along the top of the back: 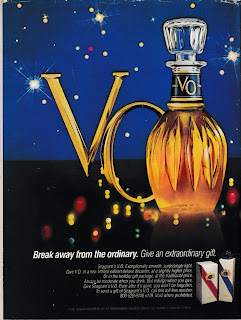 However, there was no way I could pass this up for two bucks.  I've seen copies of this magazine sell for $50 to $150 on eBay.
Purchase #2:  Comic Books $1
A few minutes after purchasing the Sports Illustrated, I came across a guy selling cheap comics.  I don't really collect them, but I figured for the price (50¢) I'd ask to see if he had any Star Wars, Robotech, Star Blazers, or Usagi Yojimbo comics.  He had this lone issue of Robotech: 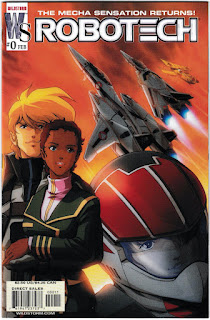 2002 Wildstorm Comics Robotech #0
He didn't have any change, so he told me I could have it for free.  But I decided to look for one more comic book to make it an even buck.  I found this: 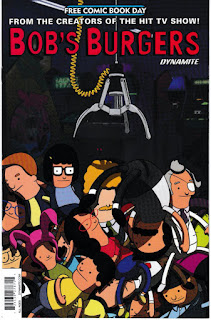 2019 Dynamite Bob's Burgers (Free Comic Book Day)
I've really enjoyed watching this show on Hulu over the years.  I'll put on in the background while sorting cards.  Lately I haven't had time for either, but when I do get some free time I hope to read this comic.
Purchase #3:  Topps Basketball Cards $20
In the very last row, there was a guy with a small display case of cards.  I've actually purchased some stuff from him before.  Anyone remember the Lil' Bow Wow autographed card that turned out to be a promo?  If so, this purchase was made from the same vendor.
He had a bunch of cheap basketball that I would have been all over two years ago.  Due to current budget restrictions, I just focused on some affordable Topps base cards: 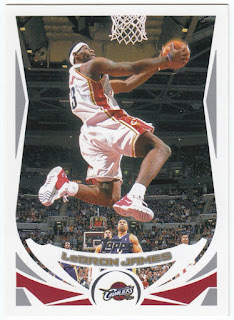 2004-05 Topps #23
I'll never be able to afford Lebron's rookie card, so I'll settle for his sophomore card instead.  This was pretty much the main card in the purchase, but the next card was the hidden treasure in the lot: 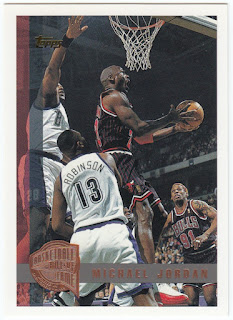 1997-98 Topps Minted in Springfield #123
When I added this MJ to the stack, I thought it was just another copy of his base card.  But when I got home, I noticed that this one had a bronze stamp in the lower right corner.  After a little digging, I discovered this is a parallel inserted into Series 1 packs.
This card easily covers the twenty bucks I spent with the vendor, which means this insert is just a bonus: 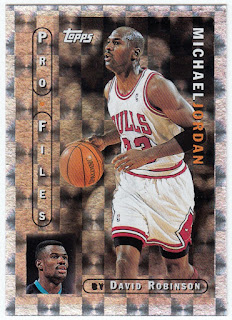 1996-97 Topps Pro Files #PF-3
This is one of those over produced, easy-to-pull mid 90's inserts.  However since Jordan is featured... it's transformed into $5 to $10 insert.  I actually thought this card was rarer, because of the vendor's asking price.  This card and the Lebron were $8 each... while the Jordan parallel, the other Jordan, and two Kobe base cards were each a dollar.
Purchase #4:  Star Wars Prequel DVD's   $3

Star Wars Episode 1: The Phantom Menace
Star Wars Episode 2:  Attack of the Clones
Star Wars Episode 3:  Revenge of the Sith
We're currently in the middle of state testing and last Thursday our 8th graders took their science test.  Unfortunately that left a 3 hour window where 7th grade teachers literally had to kill the entire time with their home room students.  My solution?  Show one of the Star Wars movies in celebration of May the 4th.  The problem?  I must have lent out my set of classroom DVD's, because when I looked for them... they were gone.
Anyways... there are always plenty of DVD guys at our local flea markets.  This particular vendor had his for a buck a piece.  I'm pretty picky about purchasing used DVDs, but upon closer inspection there wasn't a single scratch to be found on any of these.
Purchase #5:  Orchids  $10 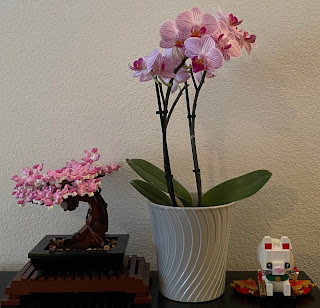 Every year I buy my mom a new orchid for Mother's Day.  One of my mom's favorite hobbies was gardening.  Sadly, I did not inherit her green thumb.  Every year the goal is the same.  Keep the orchid alive an entire year in her honor.  So far that hasn't happened.
Hope you enjoyed my latest flea market finds.  If things go smoothly, now that spring has arrived and the De Anza Flea Market is back on the calendar... I'm hoping to start going to at least two flea markets a month.  There's actually a third flea market option that could be explored, but that's sitting on the back-burner until things settle down around here.
Happy Wednessday and sayonara!
Posted by Fuji at 3:00 PM

Ask a florist how to keep the orchid alive (the easiest way). Wait, 86 that, just google it. You can do it. Nice grab on the Jordan mag!

I love your Flea Market posts, nice to see it return. I like the Kobe cards, and the Bob's Burgers comic is cool. My friend is a big fan of the show but I never got into it. Looks like you did pretty well.

I like Bob's Burgers, though I haven't seen it in a while.

I noticed a Rodman guest appearance on a Jordan.

Loved Robotech - it was ground breaking - The one scene where the male character pulls the female character to the bed - something I never saw before on afternoon cartoons.

Would love to see an updated version or live action series.

Have you seen the LEGO orchid set? Much easier to keep alive!

Another Chapter in the never ending Saga that is... The Chronicles of Fuji.
Bless you for Blessing me with a post on Mr. Padres Birthday. Went to your page fully expecting a post Dedicated to the Late Tony Gwynn and instead was rewarded with a Sharks post despite their inability to fend for Lord Stanley's Cup. Being an Islanders fan I whole heartedly relate while I still was able to enjoy my Squads season on a whole having to deal with excessive scheduling conflicts amidst breakouts from key prospects Noah Dobson, Oliver Wahlstrom & Ilya Syrokin combined with a Career year From Brock Nelson and a lackluster performance from legend-in-the-making Matty Barzal. That LeBron 2nd Year will one day cover the cost of your entire haul.

Oh wow, you have an eye for bargains! I’ve never seen that SI before, but it looks sweet! And that is a cool 2nd year Lebron!

Good stuff, I am hoping for better weather seems to rain every weekend, so that mean the card vendors are not there.
Best wishes with a green thumb.

I agree with Johnny, you should contact a florist or some other kind of plant specialist about your flower dilemma. I like orchids quite a bit (I'm sure that my growing up reading Nero Wolfe had something to do with that), but don't think that I would have the patience to ever try and grow them.

johnnys trading spot - i've read about the soaking once a week (to 10 days) thing. my issue is there's always a point where i forget about the plant for a few weeks during summer or fall.

jupiterhill - i think bob's burgers is one of those shows where you either like the sense of humor or you don't. i was pretty stoked to add a 2nd year kobe for a buck.

elliptical man - i typically don't go a week without watching at least one episode. it's my goto show when i'm sorting or scanning cards. i just play it in the background. as for that jordan, there was another animal keeping the worm company on that card: big dog (glenn robinson)

wax pack wonders - thanks. i hadn't found deals like these in years. then again, i've only been to a handful of flea markets since the start of the pandemic

john bateman - bed scene? i do remember there being some relationships on the show, but i guess i gotta go back and watch robotech to refresh my memory on the bed scene. i know they've done a few different robotech shows, but nothing lately (that i know of). i'd love to see a remake with today's technology though.

nachos grande - yeah, i'm stoked to pick it up. it's sold out on their website. my plan is to buy it and build it with my dad. he has an orchid display for my mom at his house too.

xavier higgins - i totally forgot it was gwynn's birthday. i actually discovered it on another blog. i'm so embarrassed. i'll have to see if i have any new gwynns laying around i can write a post about. sorry it took me so long to write the sharks post. it's been a struggle to find the time to write. the good news is summer break is right around the corner. super stoked. as for those prospects you listed, once again, i'm embarrassed to admit that i don't recognize any of those names. unless they're one of the bigger names on the sharks or a legit nhl superstar... i doubt i could hold up any form of a conversation about the player.

reds card collector - that minted in springfield was truly a nice find. very excited to add it to the collection

sumomenkoman - we'll have to hit up a flea market when i go down to southern california this summer. and the next time you're up here for a show, maybe we can hit up one of the local flea markets

diego torres scd - hope the weather improves and you find some cool cards. it's been a really cool may here in the bay area, but at least it's been sunny. actually we could really use some rain these days

jon - they're surprisingly low maintenance. i just need to set an alarm on my phone to remind me to soak it every 7 to 10 days. i can usually keep it alive for a few months, but there'll be a point where i forget to water it for several weeks and that's when things go downhill fast. by the way... not sure if you're into legos, but like chris pointed out... they just released an orchid set. based on the reviews on youtube it looks pretty good.

Congrats on the basketball pickups! And which movie did you wind up playing for Star Wars Day?

Orchids are really tricky to grow. I have plants and flower boxes in my classroom. I have tried orchids two or three different times and failed. That Sports Illustrated Jordan cover is pretty sweet. I saw one of those autographed a few years back at a local show. It was quite pricey.