It's official.  My two and a half week summer break has arrived.  What does that mean?  Well... it means I get a chance to do the following: 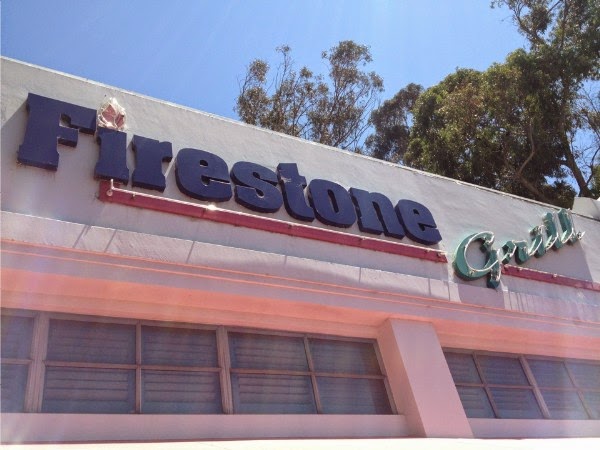 3.  Take my niece and nephew down to San Luis Obisbo. 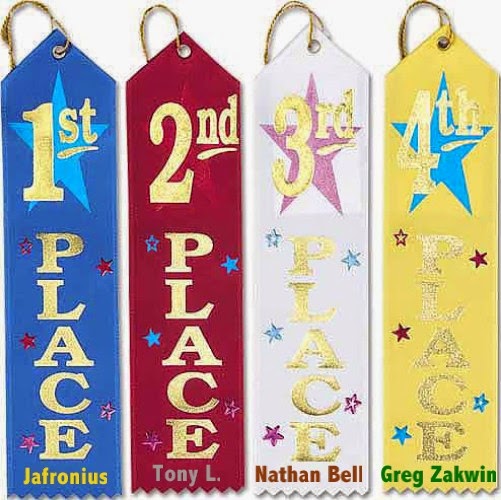 4.  Finally build and ship out the four "prize packages".

7.  Catch up on Game of Thrones, Orphan Black, Hell on Wheels, and The Walking Dead.

8.  Write and schedule a bunch of blog posts in advance. 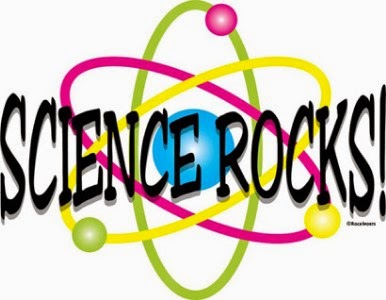 9.  Prepare for the two new subjects I'll be teaching next year. 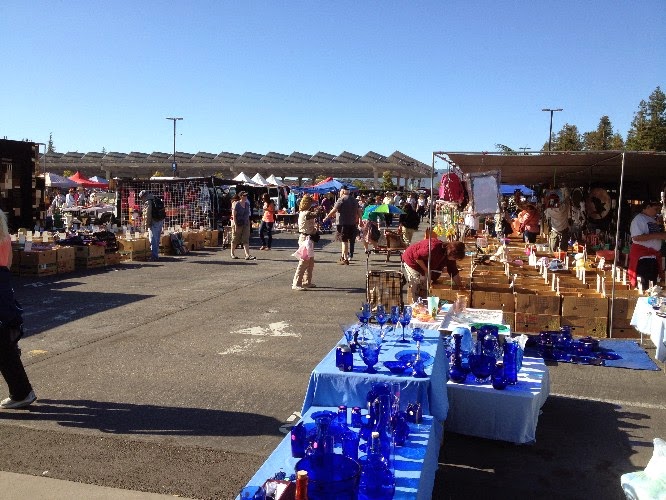 In the meantime... I though I'd share the first card that came to mind when I thought of summer:

I'm pretty sure it's the first autograph I ever pulled from a pack.  It's from a set produced back in 1992 called Beach Sports.  It's primarily a beach volleyball set with surfing, windsurfing, and skateboarding sprinkled in.  Back then beach volleyball was huge... well at least among my friends. We'd head over to Santa Cruz and play on a regular basis.

Anyways... that's pretty much why I ended up busting a few packs of this stuff when it arrived at the card shop.  At the time, Michael Irvin was coming off of his first Pro Bowl season and the Cowboys were finally turning things around.  So you can imagine how excited I was when I pulled it from the pack.  My boss at the card shop wanted me to sell it to him, but I decided to hold onto it.  Huge mistake.  These days you can pick up this autograph on eBay for under $40.  Oh well.  It's a piece of my collecting history and one of the handful of cards I decided to keep over the past twenty-something years.

I hope everyone is enjoying their summer.  Happy Wedneday and sayonara!
Posted by Fuji at 10:00 PM 16 comments:

Five Out Of Six Ain't Bad

Yesterday baseball fans had the opportunity to witness something special.  The lineup of National Baseball Hall of Fame inductees was as loaded as it gets.  It wasn't until watching yesterday's ceremony that it truly soaked in... just how lucky I've been to have witness the greatness of Greg Maddux, Tom Glavine, Frank Thomas, Joe Torre, Tony LaRussa, and Bobby Cox over the past three decades.

In fact it made me start thinking about some of the other first ballot hall of famers I've been fortunate enough to see play.  Currently the list stands at around twenty-eight... five of which were included in the 1986 Fleer Future Hall of Famers six card insert set.

And the one who didn't get in on the first ballot, second ballot, or any ballot for that matter?

A few years ago, I made the decision to forgive Pete for his poor choices involving betting on baseball and trying to cover it up.  That doesn't mean I'm ready to announce his HOF induction, but I'm open to the discussion.

Fleer did a pretty good job of predicting the other five players' futures...

Kudos Fleer!  I'm sure back in 1986, all six of these guys were pretty obvious selections.  But overall I really enjoy the concept behind this set.  If you've never seen these cards, they were inserted into 1986 Fleer rack packs at a rate of one per pack.

I guess Mama Fuji only purchased one rack pack for me, because for years I only owned the Reggie Jackson.  Luckily the complete set usually sells for only $2 to $3 on eBay.  Not bad for a twenty-eight year old insert set loaded with first ballot hall of famers.

If you worked for Topps and were given the task of creating a six card insert set of current players who are destined to be "future hall of famers"...


Who would you include in your set?

I'd probably start with these four players:  Ichiro Suzuki, Miguel Cabrera, Derek Jeter, and Albert Pujuls.  I wouldn't be surprised if all four of these guys ended up being first ballot hall of famers.  The final two spots weren't so easy.

There are several solid hitters who should eventually end up in the hall, but I ended up choosing Adrian Beltre over David Ortiz, Carlos Beltran, and Todd Helton.

And I reserved the final spot for Clayton Kershaw.  Now before I start receiving all of the negative comments, I want to preface my decision by stating that he hasn't guaranteed himself a spot in Cooperstown.  But the guy is on pace to win his third Cy Young Award in four years, he's the best pitcher in baseball, and he's only twenty-six years old.  Hopefully he stays healthy and has several more solid seasons in front of him.

Happy Monday and sayonara!
Posted by Fuji at 3:00 PM 10 comments:

Do you ever wonder why it took you so long to start something?  That's how I feel about starting my Frank Thomas PC.  I've admired Thomas and the damage he could inflict on opposing pitchers since the early 90's.  But it took me over twenty years to officially start a collection of his cards.

Since tomorrow is his special day, I figured I'd honor him by sharing some of my favorite cards featuring The Big Hurt in my collection... 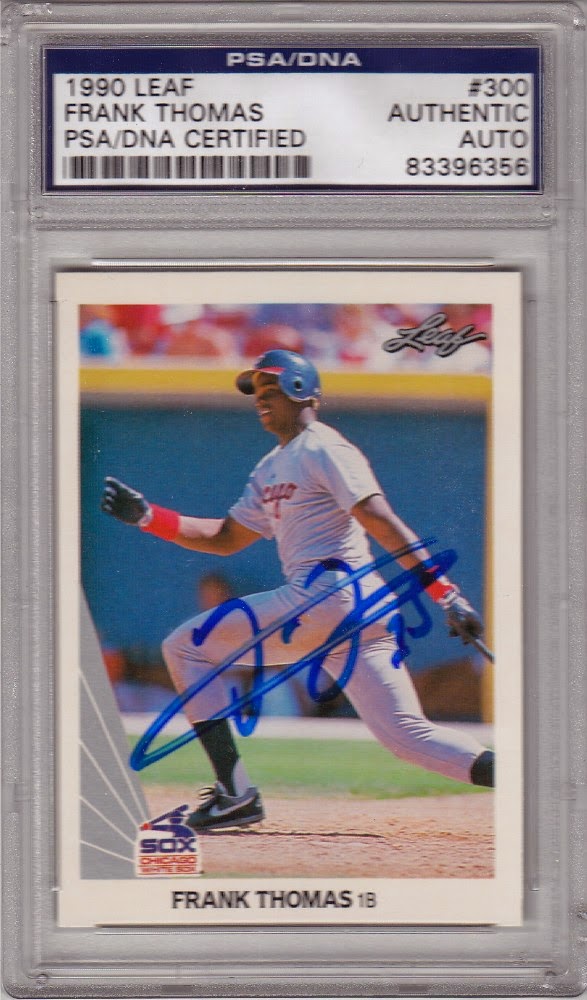 This particular card actually combines two new collecting interests: Frank Thomas and certified autographed rookie cards.  It's not his rarest regular issue rookie card, but it's definitely the most iconic. And that's why it's one of my favorite cards in my collection. 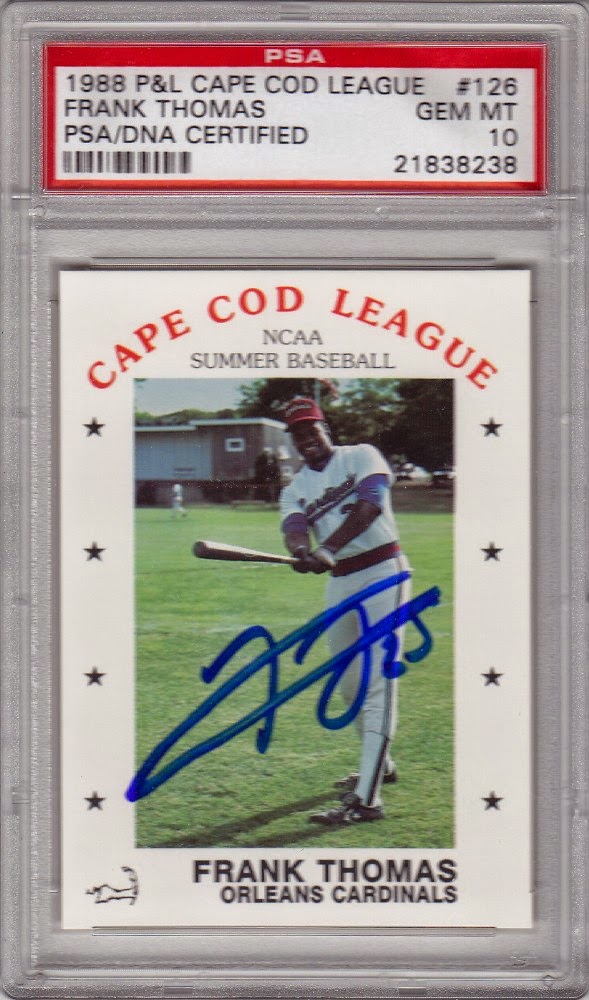 Back in the early 90's, I (along with millions of other collectors) went through a "minor league trading card" phase.  Over the past few years, I've crossed several of them off of my wantlist, but this is the only one I own that's autographed.

I own a bunch of Frank Thomas jersey/bat cards, but only one batting glove relic.  In an era where demand for relic cards is nowhere near what it once was... it'd be hard to argue the coolness of this card.

This might surprise you, but this card is a lot more difficult to track down compared to his other rookie cards.  Okay... so it's not as rare as the Topps "no name" error.  But this is one of those rare instances where Beckett actually has this card listed below their actual market value.

I'll wrap up this post with quite possibly the most affordable Frank Thomas autograph on the market.  You can pick one of these up for around $25 on eBay or Amazon and it's hard signed.  The downside?  It's oversized (5" x 7"), so it might create storage issues for some collectors.

If you're interested in seeing my entire Frank Thomas collection, click here.  It's still pretty small... but my goal is to add three to five new cards each year.

Well that's it for tonight.  Happy Saturday and sayonara!
Posted by Fuji at 9:00 PM 7 comments:

When I was younger, I loved eating canned peaches.  I loved watching Star Wars.  And I loved basketball.

I still eat canned peaches and enjoy watching Star Wars... but basketball is no longer something I enjoy.  But today I read on ESPN that my childhood favorite player was in negotiations for the head coaching position with his former team and my former favorite team:  The Los Angeles Lakers.

Back in the 80's, Byron was a lights out shooter.  As a kid, I practiced his baseline jumper on a regular basis and eventually got pretty good at it.

A few years later, I started collecting basketball cards and quickly started targeting Byron's cards.  One of my first big purchases was a copy of his 1986-87 Fleer rookie card.

In 1993, the Lakers released him after he spent ten seasons and won three titles with them.  That didn't keep me from collecting his cards.

Three years later, he rejoined the Lakers after spending some time in Indiana and Vancouver.  That year he wrapped up his career mentoring a kid named Kobe.

He eventually came back to the NBA as an assistant coach and eventually spent over a decade as a head coach for the New Jersey Nets, New Orleans Hornets, and Cleveland Cavaliers.

After the Cavaliers struggled for three straight seasons, Scott was fired towards the end of the 2012/13 season.

But life is filled with second chances.  And even though I won't be watching or following professional basketball anytime soon... I was happy to hear that my favorite player from back in the day is getting a second chance as a Los Angeles Laker. 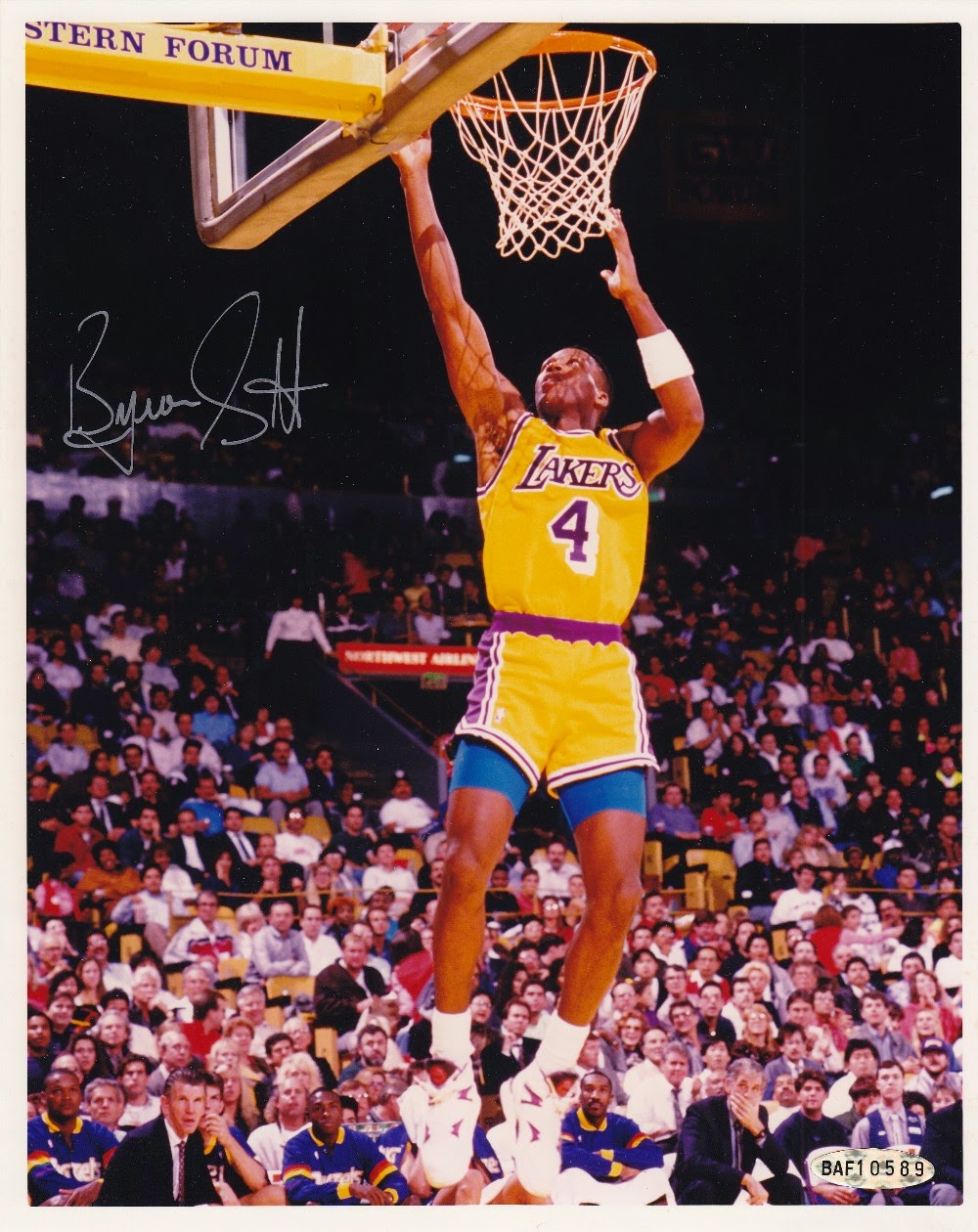 This blog post has been identified to potentially trigger seizures for people with photosensitive epilepsy.  View discretion is advised.

Here's another card I discovered recently in one of the 5,000 count boxes.  I have no idea when or where I acquired it, but it's pretty awesome.  Granted... I'm one of those people who get distracted to bright, shiny objects.

The card is a Limited Exposure parallel from the 1997 Donruss Limited set.  Back then... it was considered a mid to high-end product and was broken down into multiple subsets.  Garciaparra and Grudzielanek were paired together and included in the "Counterparts" subset, because they both shared the same position.

Grudzielanek quietly flew under the hobby radar for fifteen seasons, while amassing very respectable career numbers.  On the other hand, Nomar is a household name among baseball fans and one of my favorite shortstops to watch back in the late 90's/early 2000's.

Happy Wednesday and sayonara!
Posted by Fuji at 5:00 PM 7 comments:

It started with the idea of consolidating three 5,000 count monster boxes, but has evolved into the organization of nearly 45,000 cards.  Sadly... I'm not finished and it's already been two weeks and probably thirty to forty hours of sorting.  Can you say, Pandora's Box?

The good news is my office will be less cluttered when I'm finally finished and I'll have a firmer grasp of my cardboard inventory.  Plus I've uncovered a bunch of cards that I had forgotten about during the process.

Last week, I came across a quartet of holograms that are paired up with some wannabe ticket stubs in one of the boxes:

The cards/ticket stubs were produced by a company called Silver Star/Field of Vision back in 1991.  As you can see, each ticket stub/hologram commemorates a key moment from the 1991 season, like Nolan Ryan's 7th no-hitter and Rickey Henderson's 939th stolen base.

The company followed up them up with an additional four that included:  Will Clark, Roger Clemens, Darryl Strawberry, and the Rawlings Gold Glove Award.  Maybe one of these days I'll find someone at the flea market who has the final four.

Speaking of flea markets, that's where I found these.  I bought them for $5.  At the time it felt like a good deal.  I remember selling these for $10 to $20 each when I worked at a card shop in the early 90's.  These days, Beckett lists the four cards combined at only $8.  Oh how the mighty have fallen.

Well that's it for now.  I'll be sharing more of my finds with you in the near future.  Until then...

Happy Monday and sayonara!
Posted by Fuji at 11:00 AM 8 comments: