I'm sure have voiced my opinion in one way or another on a high percentage of my posts.  Most of the time I do it without even realizing it, so it's not really the focal point of the post.  Today's post is the exception.  In fact, that's what my Sunday Morning Soapbox posts are all about.  Me standing up on my soapbox and offering up my two cents worth of what some might say is nonsense.

Today's topic is "card show pet peeves".  Now I should preface this post by stating that this post is not intended to hurt anyone's feelings or preach that I'm perfect.  Names have withheld to avoid any lawsuits and anyone who has taken a few minutes out of their lives to read my blog already knows that I'm far from perfect.

I'm just letting off some steam that can sometime build up over time at card shows.  So let the ranting begin.

It really bugs me when... 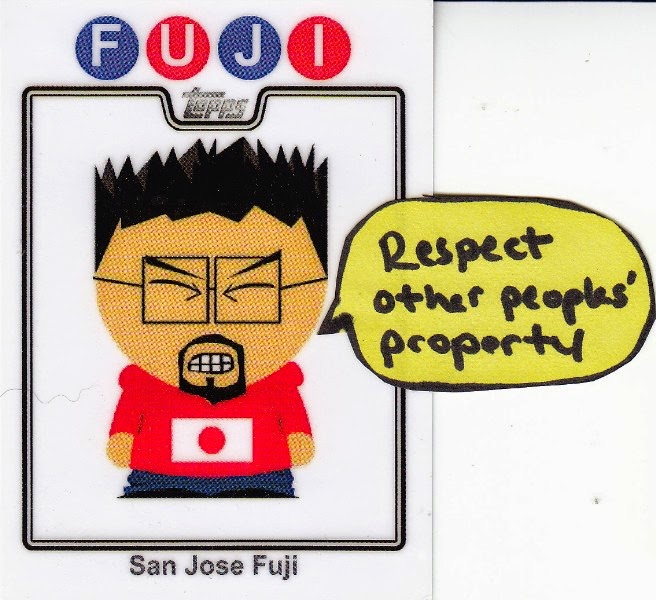 I've seen this happen several times in the past year or so.  Last year, my friend had a bunch of Beanie Babies ruined by a little girl with ice cream all over her hands.  Recently he had to throw out several photos that had Hot Cheetos fingerprints on them.

#2:  Vendors are never at their table.

My buddy just happens to be one of these guys and it wasn't until last week that I discovered how annoying this could be.  I stumbled across a guy who had a bunch of Denny's baseball card packs from the 90's for a quarter each.  Unfortunately he wasn't around, so I couldn't buy them.  I stopped by his table three or four more times, but he was never there.  I'd love to be able to say... "it was his loss"... but the truth is... I really wanted those packs. 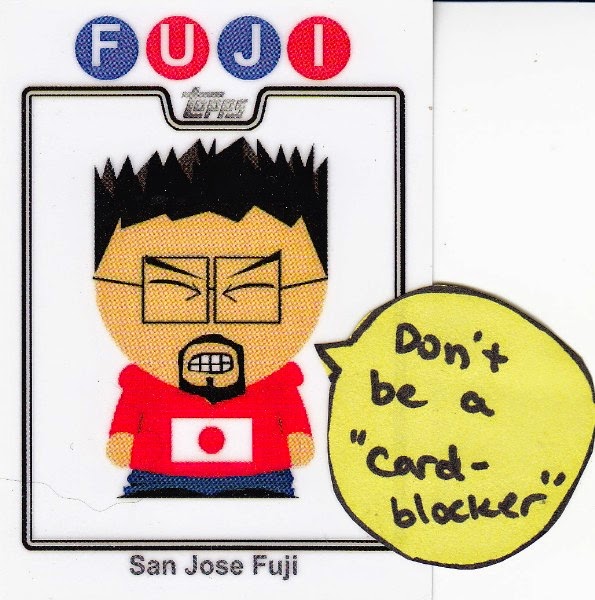 This can be another customer or another vendor.  Either way, it's super annoying.

I've been at people's tables on numerous occasions when a customer comes up with a box of cards looking to dump them, "cheap".  Half of the time I see cards I'm interested in, but I believe the dealer should have first dibs.  They paid for the table space and they're the one the customer originally approached.  "Card blockers" don't agree with me and have no problem jumping in and sniping the deal.

#4:  Vendors are super unorganized and still live in the 90's. 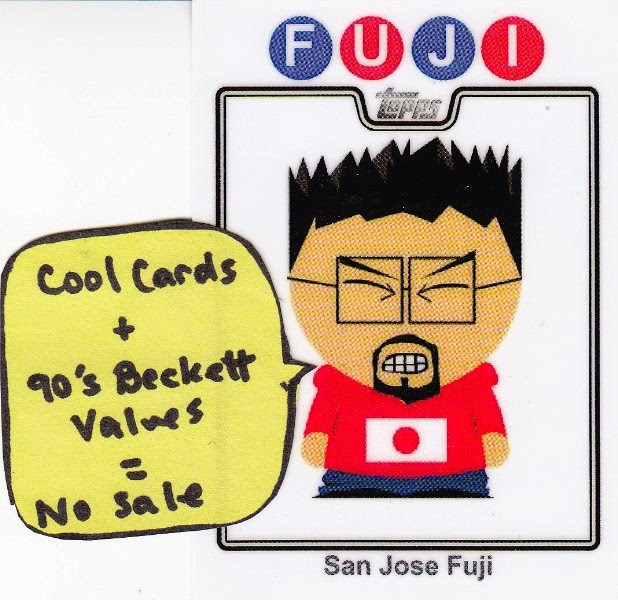 I have one specific vendor in mind as I write this post.  He has some really cool cards, but it bothers me that there's no order within his boxes.  Rookie baseball cards are mixed in with vintage hockey, football inserts, and autographed basketball cards.

It would be worth digging through his stuff if he had reasonable prices, but he's probably the only vendor around whose values resemble a mid 90's Beckett. 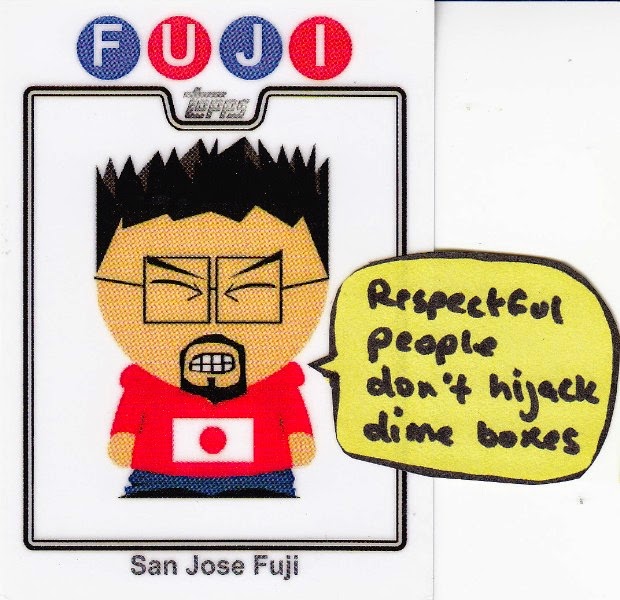 Last, but not least... this is the pet peeve that inspired this post.  I'm one of those guys who believes it's important for people to wait their turn.  This applies to life in general.  But today's post I'm targeting dime boxes.

It really bugs me when a person walks up and starts pulling cards out of a box that you're currently going through without even acknowledging your existence.  Technically they're not breaking any laws, but I think it's rude and annoying.  A simple, "are you done with these?" and the problem is solved.

I have a few more I'd like to share, but this post is already way too long.  So why don't you feel free to share your own "card show pet peeves" or leave me some feedback on the ones I just shared.

By the way, if you enjoyed reading this kind of post I encourage you to check out The Shlabotnik's Report's post on Unspoken Rules of Card Shows.

Happy Sunday and sayonara!
Posted by Fuji at 10:40 AM

Numbers 2 and 5 really bug me. I haven't had much experience with numbers 1, 3, or 4, but maybe I've simply gotten lucky in that regard. Then again, number 4 might be because I usually walk past tables that aren't organized.

The thing that really annoys me is when vendors either a) bug me the entire time to try and sell me something or b) don't acknowledge my presence at their table at all. I've spent upwards of five good minutes trying to get the attention of certain vendors at card shows.

I've never been to a card show, but I figured things like these wouldn't happen. I guess I'll be on the lookout when I finally get to attend a show myself.

Card show Pet Peeves? There never are any in my area. Unfortunately I so rarely have the opportunity to go to any, which means I miss out on all these "dime boxes" that everyone keeps raving about.

Agree with everything you said. I especially dislike when I am going through a box and some guy tries to go through the box and pushes me out of the way with a body block. It's rude and annoying. I usually stand my ground, but if I feel my temper rising and I have thoughts about pushing or worse, I walk away. Not worth the aggravation. I will have some choice words before I go though.

I know of what you speak, Fuji, I, veseenit at plenty of card showws and when I used to have a table at the Mile High flea market in Denver. Fortunately, at the local Urbandale American Legion show, everyone is well behaved.

The simple thing to ask with a dime box is "Can I look too" and if the person agrees, ask where they already started. Whoever gets to the box first has dibs on the box. But any person should allow you to follow AFTER you in the box. It just saves time.

I'm with Nick. I see 2 & 5 more than anything else. I find that in general the older collectors are more likely to ask if you mind if they look at cards in a box you are dealing with.

One thing you didn't mention is dealer courtesy. I see quite a few dealers who seem more anxious to chat with a neighboring dealer than answer a question or even acknowledge a customer.

#4, hate that. Box says "Baseball" and it has everything in it, next table. Had pretty good luck not dealing with #5. The shows I've attended, people ask to look, I tell them what I've looked through and they start from there. No problems.

I'll tell you a real pet peeve -- I've seen people take advantage of a dealer not paying attention by literally pocketing cards that they took out of the dime boxes (and quarter boxes...). I didn't know how to respond to that -- do you say to the table holder, "um, excuse me, I think that guy just took cards from you without paying?"

Or, maybe he had paid already and I just missed it. But I'm pretty sure I saw what I saw. And, in the end, I froze, did nothing, and still don't know why I didn't say anything.

Tony L, I had something like that happen a number of years ago, and I also froze. Part of it was disbelief that I saw what I saw, and part was just me not being sure what to do about it. Does anybody have any suggestions about this?

Fuji, thanks for the link, I appreciate it!

Lol... I try to walk away from those unorganized tables, but then something shiny usually catches my eye.

The good news is the "pros" of attending a card show outweigh the "cons". Card shows are awesome. I love the interaction among fellow collectors and of course the meditation that takes place while digging through dime boxes.

I'd say you're missing out... but I've seen all of the awesome cards you've been adding to your collection over the years.

I'm the same way. Once I get to the point where I'm annoyed, I'll pay for what I've pulled and leave. Sometimes I wish I had the guts to stand up to these guys and say something... but I'm too much of a wuss.

Glad to hear you have a local, drama free card show to attend. Overall the Serramonte show I went to last week is pretty awesome. But I've been compiling a list for awhile now and needed to get them off my chest.

Agree 100%. It's sort of cardboard common sense. Most of us have it, but it only takes one to motivate me to write up a blog post ;-)

Trust me. Dealers who ignore their customers is definitely on my list. I tried to keep this post a reasonable length... there will definitely be a part two one of these days.

I sort of feel bad, because I made it sound like most Bay Area card show attendees are rude. In fact this might happen once or twice a year to me. However... it just happened last week, so it's still a little fresh.

Wow. Now that would definitely be on my list had I ever witnessed it. Since I'm acquaintances with several of the dealers w/dime boxes... I would have said something. But then again, it's easy for me to say that right now. I could see myself freezing up too and saying something later.

It's weird. When I catch a student stealing something, I have no issues with calling them out and dealing with them. But I know my students and I'm also in a position of authority. I think it's a different ballgame when you're dealing with strangers. You're not sure how they're going to react. And in Tony's situation... he wasn't 100% sure of what he saw.

As for the link... that was an awesome post!

I would say my peeve is dealers who don't have things priced, and really don't know what they want for something. You dig through their box of misc. inserts, pull out 5-10 you want, then ask them how much? They proceed to want to look up everything in Beckett, applying all the "appropriate multipliers", before they quote you a price (which is inevitably too high). Dealers...either mark everything, or know what you will say when someone asks about it.

I actually hit the Urbandale show mentioned above when I was on vacation in Des Moines last year. Small show, but yes, very well-behaved. :-)

dime box hijackers, or any box/bin hijackers, suck. also, shoppers with poor hygiene. one of my pet peeves is when a dealer chastises me for not keeping cards i pulled from different boxes separate - you know, because one of the boxes is his friend's and now he doesn't know which cards came from which box. a simple sign or note on the box, or even a heads up as i'm digging would have solved that problem.

Amen. Unorganized cards are so bothersome. You would think that someone trying to sell different types of cards would do their best to separate the cards by at least sport so collectors can look to buy specific cards.

Agreed with all of the above. But my biggest pet peeve is when dealers don't have their cards priced. I'm not going to spend my time digging through boxes only for half an hour only to have the dealer quote me a price that's waaaaay over what I would be willing to pay.