The Golden Arches and an Update on Life

Since March of last year, the number of visits I've made to local retail stores has been cut down dramatically.  But whenever I do get out and about, it seems like every business in my area is hiring.  It's almost comical. 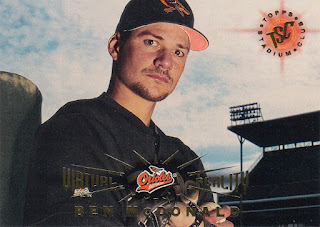 1995 Stadium Club Virtual Reality #51
Last week McDonald's offered teachers a free breakfast, so on Friday I went and received my complimentary Egg McMuffin, hash browns, and iced coffee.  It's been awhile since I've actually walked inside one of their locations, since the one near my house has a very convenient drive-thru.

1992 Topps McDonald's Baseball's Best #22
Unfortunately the one closest to my school doesn't, so I hopped out of my car and walked in.  It only took me a few seconds to realize that there were only two people working: a lady preparing the food and a cashier doing everything else (preparing the drinks, grabbing the hash browns, packing the bags, and collecting the money).  I didn't really pay attention to the woman in the back, but the cashier was very impressive.  A huge shoutout to her and anyone out there who works in undermanned retail stores, fast food chains, or any other business who are trying to hire, but can't find people to fill the positions.  Picking up the slack can't be easy.

1992-93 UD McDonald's #P5
Okay let's move on to cards and the current status of my blog... since I haven't been writing, commenting, or even reading other blogs on a regular basis. 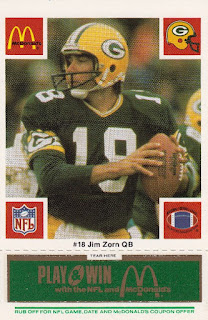 1986 McDonald's Green Bay Packers (Green Tab) #18
First off... I apologize for that.  Like the friendly cashier at McDonald's, I've been working really hard and burning the candle at both ends.  During the week, I wake up early and head into the classroom like I've been doing for the past twenty-plus years.  That part of my life is normal.  It's the second half of the day that's been a wild ride the past few weeks.
Instead of coming home and having the option to write, read, watch tv, cook, grab dinner with friends, nap, or lesson plan... I've been hanging out in my garage sorting cards in an effort to get ready for this card show that took place this past Saturday.  You might think that now that the card show is in my rear view mirror, life will return back to normal.  Sadly that's not the case.
I am not even close to being finished with the sort and with each passing day I grow more and more discouraged at the stacks of monster boxes and piles of trading cards littered throughout my garage.  It looks and feels like I opened up Pandora's Box.
I've narrowed things down to two options.  I could just toss everything back into the boxes and finish the sort when I have a more positive attitude.  The problem is I would certainly lose track of where I put things which would force me to redo some of the work when I reschedule this sort.  Or I can power through this and hopefully finish in two or three weeks.
I'll most likely do the the latter.  Regardless... I'm taking a few days to clear my mind.
As for the blog, I plan on returning as soon as the garage sort is finished... assuming I don't suffer from hobby burnout.  The good news is that when I'm done it'll be much easier for me to find cards for future blog posts, care packages, and card shows.
And when I do return to behind the keyboard, I have plenty of things to write about.  I'm still sitting on a bunch of cards from Reader X as well as a pair of PWE's from Jon @ A Penny Sleeve For Your Thoughts and Jeremy @ Topps Cards That Never Were.
I also have a few cards from my summer COMC shipment I'd like to write about and two eBay pickups from the the past month or so.  And to top it off... I made my first hobby trade in a very, very, very long time at the card show over the weekend, so I'm excited to write about that.
Until then... I hope all is well in our awesome hobby blogosphere.  I'll see you soon.
Happy Monday and sayonara!
Posted by Fuji at 9:00 AM 17 comments: