As avid sports fans, we've all attended games that we'll remember for the rest of our lives.

Last night's game between the San Jose Earthquakes and the Los Angeles Galaxy was one of those games.

Simply put... it was awesome.

Panoramic View (from my seat)

Known as the California Clasico, the rivalry between these two teams is pretty heated and has been around since 1996.  The Galaxy took a 2 to 0 lead in the 65th minute, but the Earthquakes quickly responded a few minutes later to get them (and the sellout crowd of 50,028 fans) back into the game.

Then in the 77th minute, Victor Bernardez received his 2nd yellow card, which left the Earthquakes shorthanded (sorry... I'm used to watching hockey games) for the rest of the game.  From that point on... time seemed to fly by.

As the two teams entered stoppage time, the Galaxy clung onto their one goal lead.  And just when it looked like they were going to walk away with a win... this happened:

And if that weren't enough... we were all treated to an amazing fireworks display after the game: 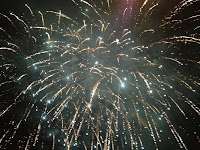 Thank you Secret Squirrel & Company for taking me to the game and giving me one of my favorite sports memories.

Happy Sunday and sayonara!
Posted by Fuji at 9:00 AM 4 comments:

It seems like the majority of collectors aren't really into this year's Archives baseball.  Some people weren't happy with Topps' decision to use the 1972, 1982, 1985, and 1990 base card designs.  While others have complained about the flimsy card stock.

But I'm okay with being in the minority, because I'm a huge fan of this product.  The combination of current stars with retired stars on old Topps' designs is exactly what I'm into.  I'm a huge fan of the 1972 Topps baseball card design and although the other designs aren't exactly my favorites, they're not my least favorites either.

Unfortunately, I don't spend a lot of money on busting wax anymore.  So I'll probably end up purchasing a "master" set off of eBay as soon as I find one at a reasonable price.

In the meantime, I figured I'd work on the Fan Favorites autograph set.  There are 59 autographs in the set, including a very short printed Pele card.  Since I'm not in the position to spend hundreds of dollars on a single signature, I'll be going after the other 58 autographs instead.

Although there aren't any HOFers (at least I don't think there are) in the set, it contains plenty of big names from the 80's and 90's.

I currently have 32 of the 58 autographs in my possession.  Plus I've already put in my redemption request for the Dave Conception autograph.  And thanks to Matt over at Cardboard Conundrum, we've worked out a trade for his Mookie Wilson autograph.  In addition to those two cards, I recently won a pair of eBay auctions with six more autographs I need.

That leaves me with 18 autographs to go.


Do you have any 2013 Topps Archives Fan Favorites autographs available for trade?

If so... I'm still looking for these:

Happy Friday and sayonara!
Posted by Fuji at 3:00 PM 5 comments: 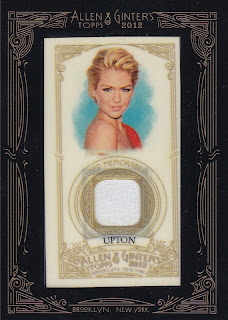 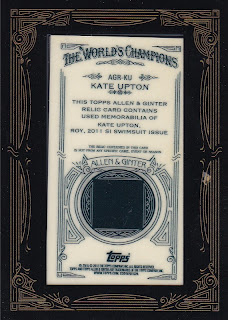 I don't usually pay for the ladies... but with Kate, I made an exception.

Flea Market Finds #40: A Big Box of Cardboard & a Trio of McFarlanes

When:  Sunday, June 23rd
Where: Capitol Flea Market
What:  Boxes and Boxes of Cardboard plus Three McFarlanes
How Much?: $85

Next weekend is the Serramonte Mall Collectibles and Card Show, so I was hoping to walk away from the flea market with most of my budget left intact.  Two words:  EPIC FAIL.

Not only did I kill off the remainder of my monthly hobby budget, but I had to dig into the wallet for more money.  But it was worth it... at least in my mind.

Here's what I picked up this week: 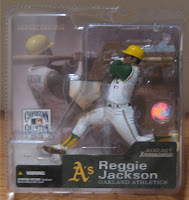 I know that $10 is a lot for a McFarlane... especially at the flea market.  But this is the Oakland A's variant, which is harder to find.  Originally, I walked away when the lady quoted me $10... but after a quick eBay search... I turned back around and grabbed it. 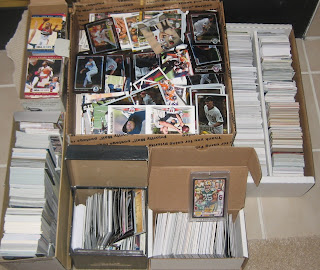 Plus there were 300 to 500 inserts and parallels from various sports and years.  And for those of you who only collect the "hits"... there were forty-five of those too: 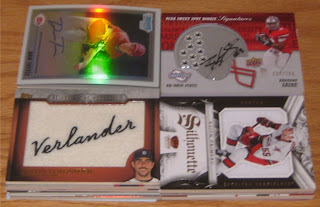 The main hit was this 2012 Topps Magic Black Autograph of Greg Jennings, numbered to 5.

I spent most of my Sunday afternoon sifting and sorting the cards.  This afternoon I'm going to start pulling and scanning the cards that will be going into my personal collection. 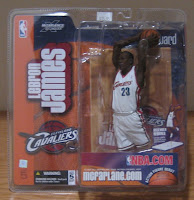 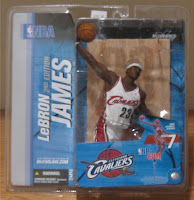 I'm not a huge fan of Lebron... but it's hard to walk away from his rookie piece (left) and a second year variant (right) at five bucks a figure.  Heck... it's rare to find these in stores at this price.  So... this was one of those times, I bought something... just because the price was right.

Okay... I've got to wrap things up and start figuring out what I'm going to keep from yesterday's purchase.

The Doctor Has Arrived!

A few years ago, I stopped paying for cable television and switched over to a much more affordable option... Netflix.

Believe it or not, it's opened my eyes to a whole new world of television.  Without Netflix, I wouldn't have had access to Breaking Bad, Sons of Anarchy, Sherlock, The Walking Dead, Jericho, and of course... Doctor Who.

I remember flipping channels as a kid and catching glimpses of The Doctor on PBS.  But I never took the time to watch it.  Then one day, I overheard students talking about it in class.  This eventually led to a huge discussion about how I was missing out on the greatest show on television.  My students informed me that it was on Netflix and that I should try it out.

I did... and I'm hooked.  I wouldn't go as far as saying it's the greatest show on television, but I'm looking forward to watching the latest season when it comes out.


In the meantime, I have these Doctor Who Topps Attax cards to keep me entertained... 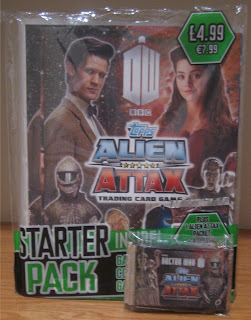 John over at The Pursuit of 80's(ness) blogged about these cards back in April.  I left a comment and he responded with a trade offer.  He sent me a Doctor Who starter pack, which contained a card album, a checklist (actually a poster), a game mat, a special lenticular card, and a pack of trading cards. 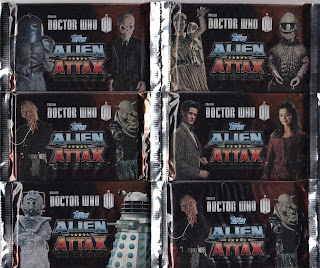 In addition to that, he threw in five extra packs.

There are 240 cards in the 2012 Topps Attax Doctor Who set.  Here's a quick breakdown of the checklist:


Out of the six packs, I pulled one of the rainbow foil cards... 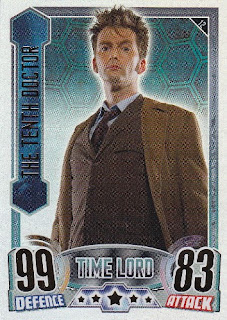 Out of the three Doctors I'm familiar with, I'd have to say David Tennant is my favorite.  It's hard to tell from this scan, but the card has a "refractor" touch to it. 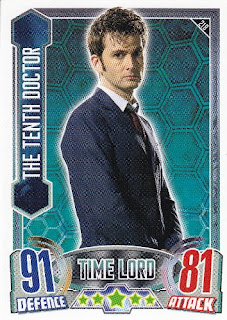 I also pulled the regular version of the 10th Doctor.  He was the only Time Lord I got.  In fact, most of the cards were aliens and humans, with a few humanoids, companions, and cyborgs mixed in.

The card I wanted the most was a Rose Tyler from the companion subset... but the Martha Jones is a nice back up.  I was also pretty excited to see Vincent Van Gogh included in the set.  Vincent and the Doctor is one of my favorite episodes. 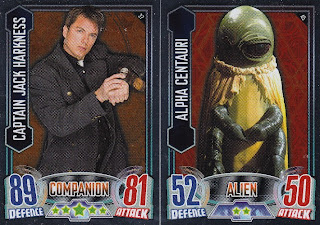 I also pulled a pair of mirror foil cards, which are your typical foil bordered cards.  And finally, there's the special lenticular card that came out of the starter pack... 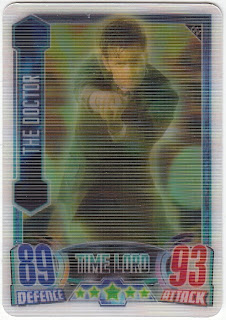 When you move the card back and forth you see the 10th and 11th Doctors.  It's definitely the coolest card in the bunch.

John... thanks for the trade.  Your Red Sox cards were packaged and shipped last Tuesday. I hope they're able to fit into your PC.

Happy Sunday and sayonara!
Posted by Fuji at 3:00 PM 17 comments:

Either last year... or the year before, I started trying to track down a 1991 O-Pee-Chee Chipper Jones rookie card.  My hunt lasted a lot longer than I had expected.  Simply put... for a card issued during the heart of the Junk Wax Era, they weren't so easy to find.

Anyways... I eventually picked up a couple for my collection.  But then I started thinking... what about other early 90's O-Pee-Chee rookie cards?

The first one that popped into my head was Frank Thomas from the 1990 O-Pee-Chee set.  As I expected, they are a lot less common than his American counterpart.

I'm sure that O-Pee-Chee cranked up the printing presses, like everyone else back in that era.  But unless you live in Canada, it might be a little trickier for you to obtain one than you might expect.

Happy Friday and sayonara!
Posted by Fuji at 11:21 AM 6 comments: