Topps, What Do You Think?

Two of my biggest passions are teaching and collecting baseball cards.  Each year I integrate these two things by having my students research civil rights leaders and create trading cards for them. 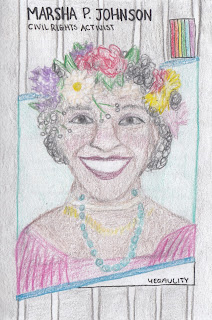 If you enjoyed the Topps Project 2020 and Topps Project 70 cards... then you might enjoy these custom cards.  I've also included the card that inspired my students' designs...
#1:  Cesar Chavez

So Topps, what do you think?  Any of these artists have the skills to work for you?
If not, check out these customs... 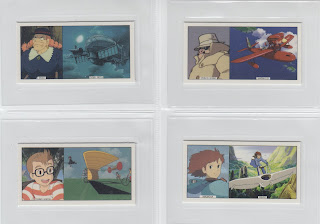 #1: Tombo Kopoli from Kiki's Delivery Service
#2: Dola from Castle in the Sky
#3: Nausicaa from Nasicaa of the Valley of the Wind
#4:  Porco Rosso from Porco Rosso
These four customs were designed and printed by Nick over at N J V W.  The four tobacco sized cards are based on the 1936 Carrera Famous Airmen & Airwomen set.  If you are familiar with Hayao Miyazaki's films, then you probably recognize these characters. 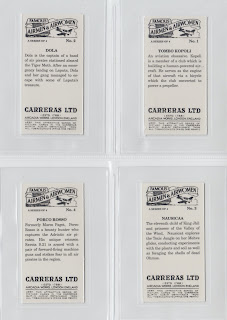 Last November, I commented on Nick's post that I'm a big fan of Miyazaki's films, so I was pretty stoked to see these arrive in my mailbox.  The problem was deciding which collection to put them into.  Normally, I have a special section reserved for blogger customs in my Sports Card Smorgasbord binder.  However I ended up sliding these four into my Japanese Non-Sports binder instead.
Thank you Nick!  I'm a huge fan of your custom cards.  Keep up the excellent work!
And for all of the collectors interested in baseball cards... I didn't forget about you.  When the students turned in the trading cards, one of them turned in this Ryan Zimmerman rookie card: 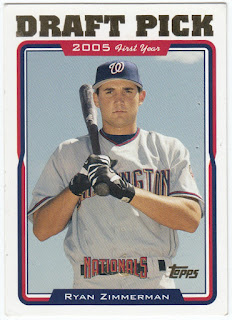 2005 Topps Update & Highlights #UH323
This card is the latest addition to my Damaged Card PC.  If you look closely there are two staple holes near his left shoulder on the right side of the card.  Usually I'm not the one who damages the cards.  I only collect them.  However in this particular scenario... I'm the guy who stapled this card to my classroom wall.  I display all of the custom cards next to the original cards.
Well that wraps up another post.  Happy Cesar Chavez Day and sayonara!
Posted by Fuji at 3:00 PM 17 comments:

The past month was little crazy.  The MLB lockout ended.  The A's have traded away most of their stars.  Tom Brady came back.  Gas prices are soaring.  And by the time this post is published... my students should be finished with a huge school project that has been keeping me busy during this timespan.
Enough whining and complaining (because I truly do love my job)... let's focus on something positive like baseball cards...
Last month, Bo over at Baseball Cards Come to Life! sent me a PWE with some very nice additions to my Damaged Card PC.  Instead of describing them with words, it's easier to let the scans do the talking... 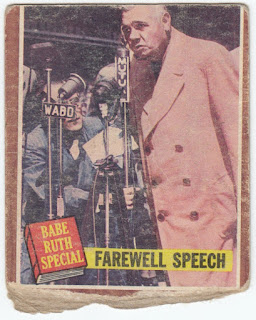 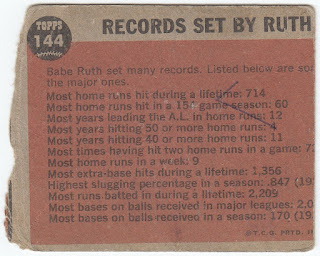 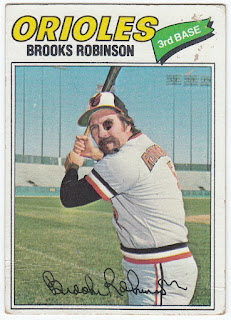 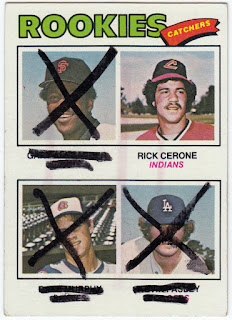 1977 Topps #476
Someone didn't like the fact that Rick Cerone had to share his rookie card with Gary Alexander, Kevin Pasley, and Dale Murphy. 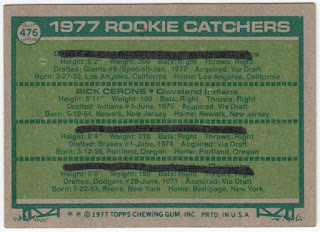 The person even tried to omit their existence on the back of their card as well.
I realize seeing ripped and defaced cards can be difficult to look at, but I assure you that there are collectors out there who will provide warm and loving homes for them.  And I'm one of them.
Bo also completed my Tony Gwynn Topps base card run with this card: 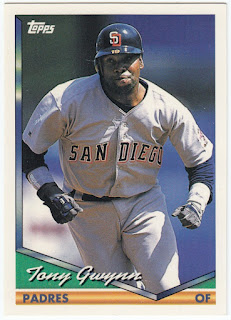 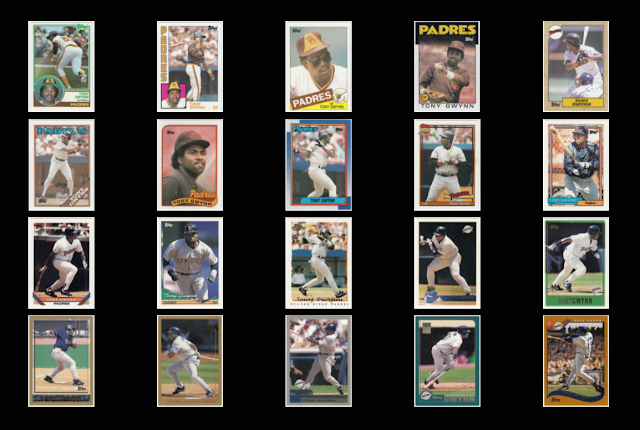 Thank you Bo!  With Gwynn out of the way, I can now focus on building Rickey's entire run of Topps cards.  But I'll save that for a future post.
Happy Tuesday and sayonara!
Posted by Fuji at 3:00 PM 19 comments:

Mondays suck.  Maybe I'm being a bit melodramatic, but it's definitely my least favorite day of the week.  Let's brighten things up with some happy music to kick off the work week...
This song is so cheerful and merry.  It never fails to bring a smile to my face.
Winning card related contests also has the ability to turn a frown upside down and within a four week span, I happened to win two of them.
Every January, Collector's Crack holds his Almost the Easiest Super Bowl Contest on the Web contest.  This year CaptKirk42 won the grand prize... and I walked away with the door prize.  Luck was definitely on my side... as there were fifty-two names entered into the randomizer.  After three randomizations... my name wound up on top.  He sent me two large stacks of Seattle Seahawks cards.  Here are a few of my favorites...

2013 Topps Legends in the Making #LM-ML
2010 Topps Chrome X-Fractor #C53
On Saturday, I wrote about how it's going to be tough watching the Seahawks play this year as they rebuild.  Luckily... we'll always have Super Bowl XLVIII.  All four of these guys contributed to the win that day.
Eight years earlier... before Russell Wilson and the Legion of Boom brought the city of Seattle a title, the Seahawks lost to the Pittsburgh Steelers in Super Bowl XL.

2004 SPx Spectrum #110 (#'d 04/25)
2003 Bowman's Best #101
Both of these Marcuses played in that game and both were first round picks by Seattle.  Unfortunately Tubbs' career was derailed by injuries.  But Trufant played ten seasons for the Hawks and was a Pro Bowler in 2007.
The final two cards I want to share features two players who weren't on either of those Super Bowl teams, but they were fan favorites...

1997 PROflick FlickBall #16
I'm pretty sure this is the first PROflick card I've owned.  I will never get tired of adding interesting oddball stuff like this to my collection.
But my favorite card of this prize package was this Chris Warren... 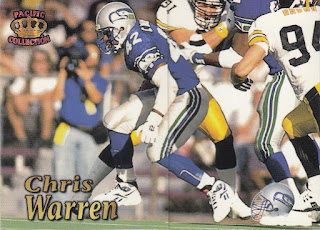 1995 Pacific Triple Folders #13
It's hard to see from this scan, but it's actually a tiny folder that when laid flat... opens up to reveal this:

This card is just another example of why the 90's were so cool.
The second prize package I won is from Matt over at Sport Card Collectors... who happens to be a fellow collector who appreciates awesome cards like that Chris Warren.  However instead of winning cards from the 90's, his contest involved some super shiny cards from his 2021 Finest box break.
After seeing the original post, I was crossing my fingers and hoping to add this card to my collection: 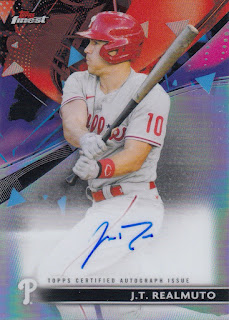 2021 Finest Autographs #FA-JT
As many of you know... I love collecting autographs and this is my first hard signed card of Realmuto.
The prize package also included this rookie card autograph of Brailyn Marquez: 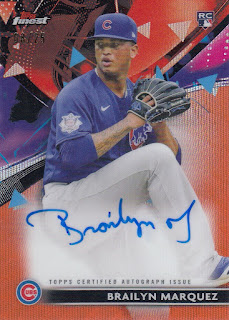 2021 Finest Orange Refractor Autograph #FA-BM (#'d 08/25)
I wasn't familiar with this guy.  But now that I have a signed rookie card numbered to 25, I guess I'll be quietly rooting for him moving forward.
Matt's box was a Marquez hot box, because he also pulled a blue refractor: 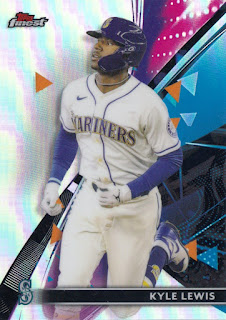 2021 Finest Refractor #64
If you want a shot at winning cards like these, then I encourage you to head over to Matt's blog.  He's sponsored by Topps and routinely writes reviews on many of their latest products and hosts giveaways from these breaks.
If football cards are more your style, then head over to Cynical Buddha's blog where he hosts his annual Super Bowl contest.
Thank you Matt and Cynical Buddha for hosting both of these contests!  Thinking about these contest wins will definitely brighten my Monday.
Everyone else... just replay the Mr. Blue Sky video and hopefully your Monday will be as bright as mine.
Happy Monday and sayonara!
Posted by Fuji at 9:00 AM 15 comments: