Sports cards come in all shapes and sizes.  This often creates storage issues which can sometimes frustrate collectors.  I am not one of those collectors.  I'm all about adding new and different cards to my collection... and it's even more exciting if it's a mysterious card.
Bob over at The Best Bubble recently sent me another PWE with two new additions to my Tony Gwynn collection.  Both cards are about the size of a postcard (3.5" x 5") which means they are larger than your standard trading card.
#1:  1998 Upper Deck Jumbo #500 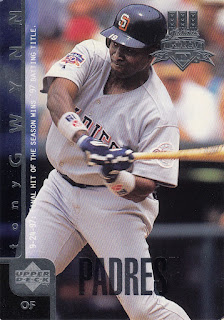 Beckett and Baseballcardpedia have a set on their sites that measures each card as being 5" x 7" jumbos... that was inserted into specially marked retail Series 2 blasters.

My 2008 SCD Standard Catalog of Baseball Cards pretty much says the same thing, but states that the Jumbos lack the metallic foil on the front and the hologram on the back. 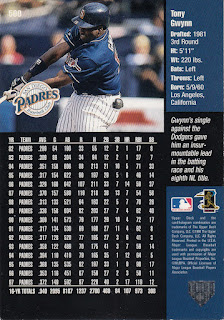 The thing is... the card Bob sent me is not 5x7 and the foil appears on the front and the UD hologram is on the back.
Other than the size, the cards appear to be identical.  Here's the regular sized version for comparison: 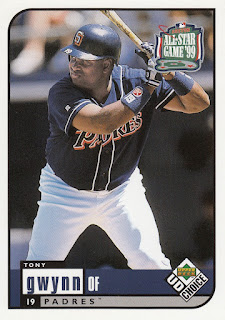 Beckett and Baseballcardpedia weren't very helpful.  But the 2008 SCD Catalog cleared everything up for me:

This card was issued with twenty other cards in a special box set sold at retail outlets. 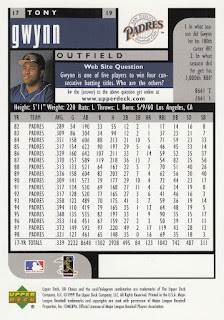 There are two big differences between this jumbo and the standard size version.
#1:  The cards are numbered differently.
#2:  There's a 1999 All-Star Game logo in the upper righthand corner of the jumbo.
Here's what the regular base card looks like:

1999 UD Choice #137
And here are all four cards side by side for size reference:

Thank you Bob for these two new additions to the Tony Gwynn PC.  I always enjoy a good cardboard mystery.
It ended up being a fantastic week in regards to that collection, because a few days later I attended the Branham High School Flea Market and found these two Gwynns in the 6 for $1 boxes: 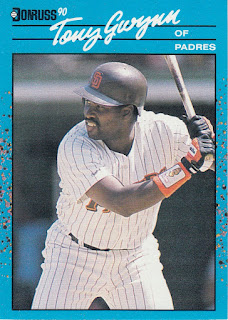 1990 Donruss Best of the National League #11
In 1990... Donruss released two 144 card boxed sets that highlighted the best players in baseball.  One set was dedicated to National League players, the other for the American League.  Both sets featured the same front card design as the flagship set, but swapped the red border for blue.  The card backs look different, but unfortunately... I forgot to scan my copy. 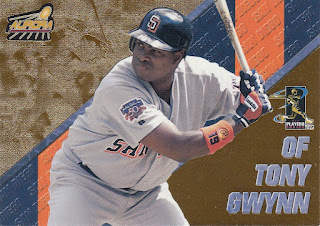 1998 Pacific Aurora Pennant Fever #1
I'm not a fan of products that contain inserts in every pack of cards.  Fleer did it with some of their mid 90's products.  Pacific did it too.  Collectors who opened up 1998 Aurora would find one of these inserts in every pack.  That's why I'm kind of surprised it too me twenty-four years to add this card to my collection.
Anyways... I'm not going to complain.  I was able to add four new Gwynns within a span of a few days... so it's something to celebrate.
Happy Thursday and sayonara!
Update
Mystery solved.  Jim (cards as i see them) has a Ken Griffey Jr. from this set that he received from Upper Deck after sending in wrappers, so these are indeed wrapper redemptions.  Thanks Jim!
Posted by Fuji at 3:00 PM

TCDB shows that some of the larger cards were available through a wrapper mail-in offer; could it be part of that, perhaps?

Interesting...is that first picture of the 2008 SCD supposed to be the same as the second? I can't tell the difference between the two.

cardboard jones is correct about the wrapper redemption. i partook of the offer and still have some of those jumbo cards in my collection.

cardboard jones - interesting. thanks for suggesting tcdb. i found the jumbos for the mail-in exchange, but they mention first series and their 5x7 size. did you see a series 2 mail-in that happened to be postcard size? if so, could you leave me a link? thanks in advance

jafronius - sorry. that was my mistake. i updated the post with the correct scd image. thank you for pointing that out.

gcrl - were the jumbos you received 5x7 or postcard size?

I guess what I saw was the 1st series. Sorry.

cardboard jones - no apologies necessary. i appreciate you taking the time to try and help. have a great weekend!

Fun finding a card that you didn't know existed. Guarantee someone out there somewhere has asked the same question.. what is this? And now there's at least some documented research on it that may come up in searches.

i think tcdb (and baseballcardpedia) that reference 5x7 are incorrect. beckett refers to the "blow ups" as 3x5, and i found my griffey from my series 1 mail-in which is 3x5. series 2 blow ups weren't a mail-in (according to baseballcardpedia) but were instead box toppers of a sort. it's been 24 years, but i know i sent in wrappers for the cards i received.

All excellent cards! I agree though that different sized ones are a bit of a pain to store. I'd not seen the blue DonRuss 1990 ones before. The red ones were printed with the wrong backs and then with the correct backs. I'd be interested in the blue backs.