Flea Market Finds #58: A Little Bit of Everything

I'm so bummed.  I just woke up to the pitter-patter of rain drops hitting my roof... which means that there's probably nobody setting up at the flea market today.  I guess it's a good time for me to share last week's purchases. 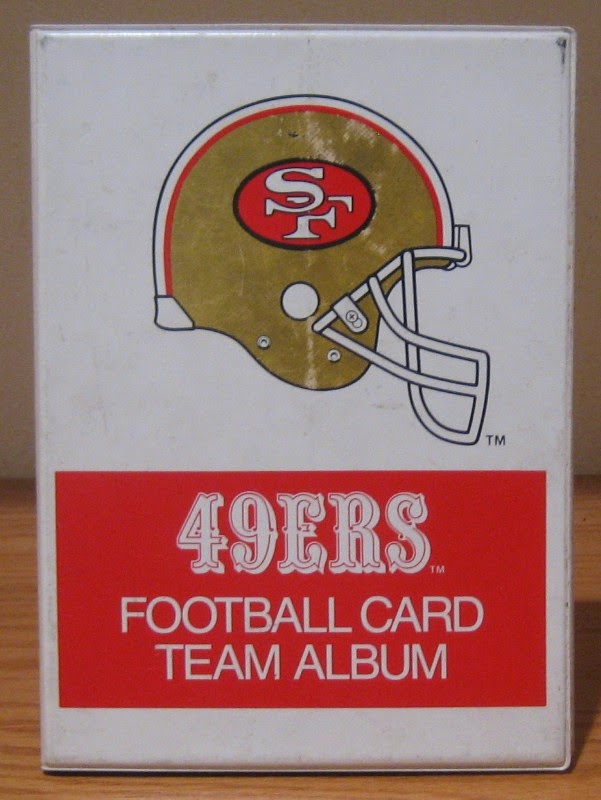 I figured out that most of my readers collect baseball cards, so over the years I've adapted my blog to fit the audience.  But it should be noted that I love watching football and enjoy collecting football cards too.

Last weekend, my buddy and I stumbled across a new guy with collectibles.  While Mike was working out a price for a Joe Montana autographed mini-helmet, I noticed this four-pocket mini album.  The two cards that stood out were rookie cards of Bobby Mitchell and Earl Campbell:

There were also a bunch of football inserts from the 90's: 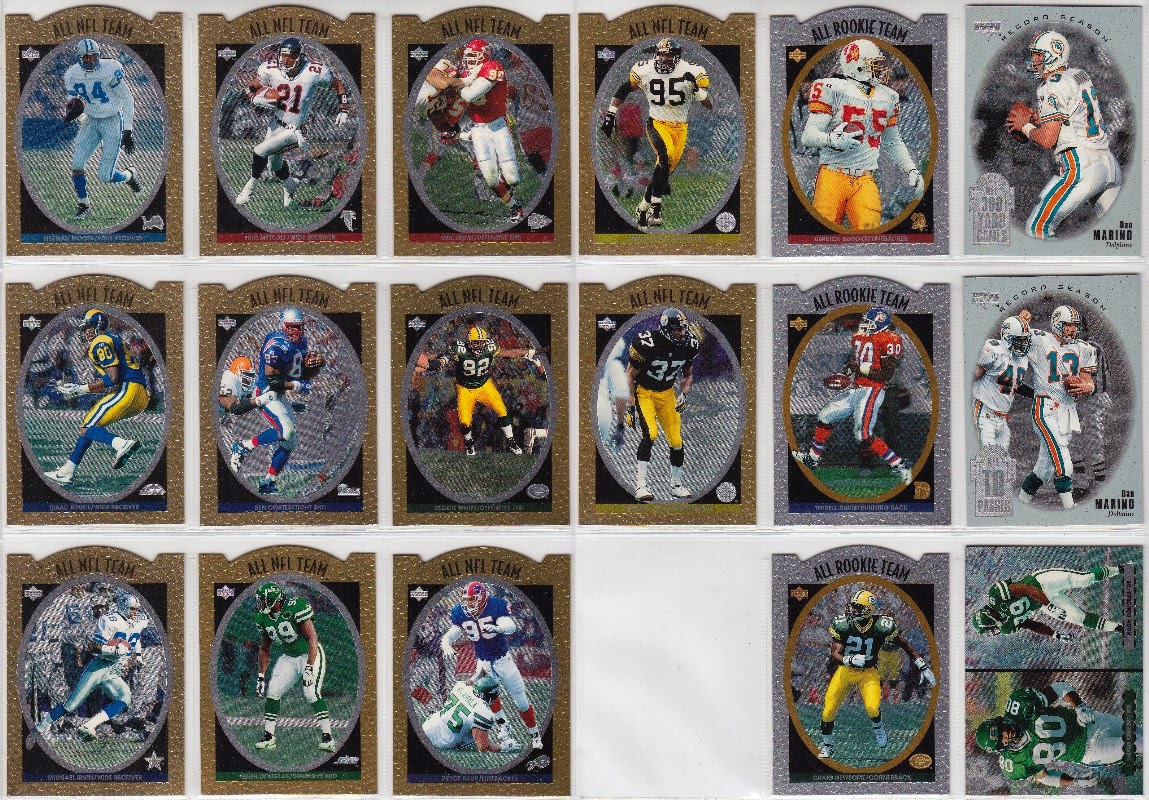 And a cool Michael Jordan parallel for my collection: 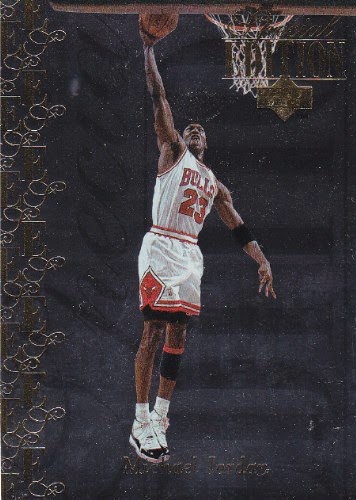 The guy mentioned that this card used to be pretty valuable and it books pretty high.  I don't really watch basketball anymore, but I'm always happy to add another Jordan to my collection. 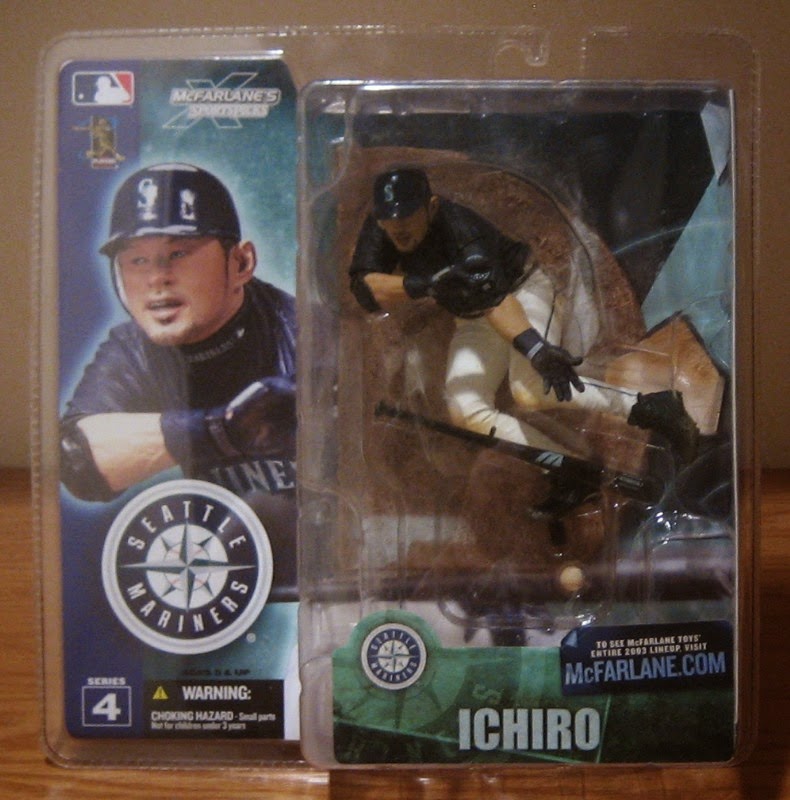 I already own at least one of these figures... but for a buck, I just couldn't pass it up. 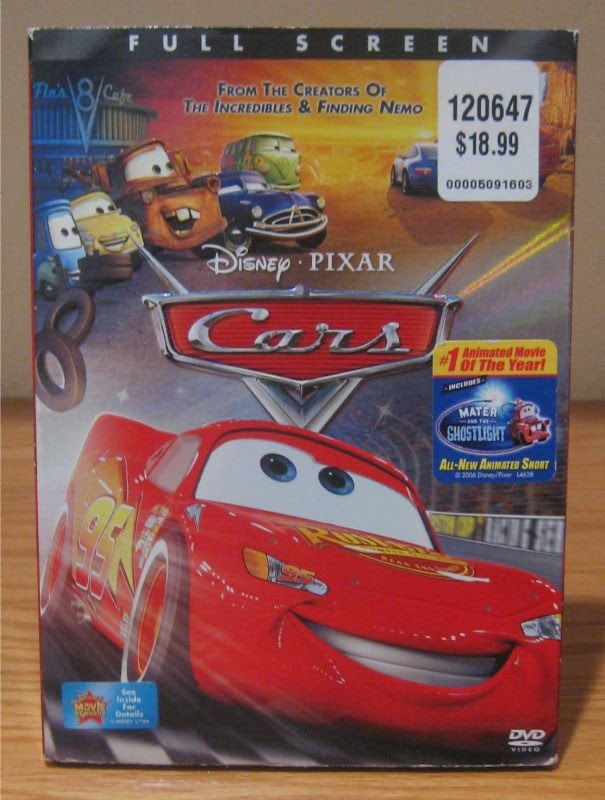 Whenever I find cheap Disney DVD's, I'll usually pick them up for my summer school class.  This one isn't new and the outside package is pretty worn, but the disc itself is in great condition.

My Japanese athlete shelf lacks variety.  It consists of four Ichiro bobbles/figures, a Hideo Nomo SLU, a trio of Japanese soccer player figurines, a Chunichi Dragons mascot figure, and a 442nd G.I. Joe action figure.  So if I have the opportunity to add something to the shelf and the price is right... I'll probably end up doing it... even if the bobble head features a San Francisco Giant.

Well... that's all folks.  I kept it under $20... so I'm pretty proud of myself.  I recently screwed up big time on an eBay purchase, so I need to save every penny I have.  Stay tuned for the details.

Wait... I can't hear the rain anymore.  I wonder if anyone decided to set up.  I guess we'll find out.

Happy Sunday and sayonara!
Posted by Fuji at 7:00 AM 6 comments:

I'm In One of Those Moods

I'm not sure what the deal is... but today my allergies were kicking my butt.  I had a bad headache and itchy throat for most of the day... which put me in a pretty foul mood.

Thankfully, my students were very understanding and tried their best to make me feel better.  Regardless... I was counting the minutes until I could jump in my car and head home.  As I was driving, I started thinking about how my miserable mood might have impacted my students and whether or not there a better way to approach these terrible allergies.

Anyways... this led me to thinking about mood rings... which reminded me about this 1999 Finest "Leading Indicators" insert card of Ken Griffey Jr.:

I picked up this card a few weeks ago at a card show for 50¢ and it's pretty sweet... especially for the price.  The card is constructed with heat sensitive, thermal ink technology similar to the stuff mood rings have.

At room temperature, the outfield background on the card is black.  But as you apply heat with your fingers, the card reveals the number of home runs each players hit in 1998.  So according to Griffey's card, he hit most of his home runs to right field.

Pretty cool, right?  Just another example of how card companies showed off their creativity during the 90's.

Okay... time to take some Benadryl, lay down, and rest.

Happy Friday and sayonara!
Posted by Fuji at 4:00 PM 7 comments:

The Big Kahuna Has Struck Again!

On March 23rd, 2012... The Big Kahuna hooked me up with one of my favorite pieces in the collection... an autographed Kurt Suzuki baseball.  Exactly two years and three days later, another package arrived from him.  Tim... what's with the last week in March?  Whatever it is... I totally appreciate it.

Let's have a look at the contents...

A pair of inserts and a new memorabilia card of my favorite player... Mr. Tony Gwynn. 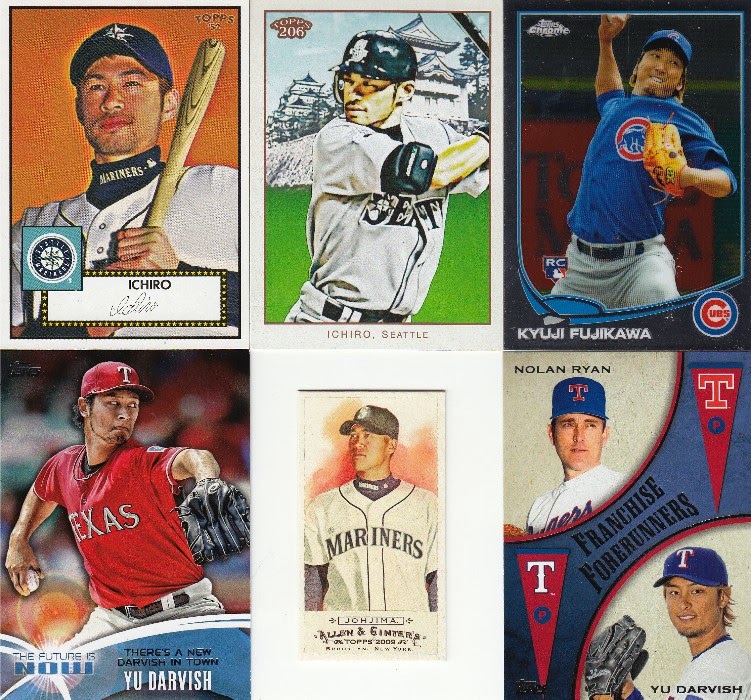 A nice handful of Japanese baseball players... including a pair of Yu Darvish cards I didn't have. 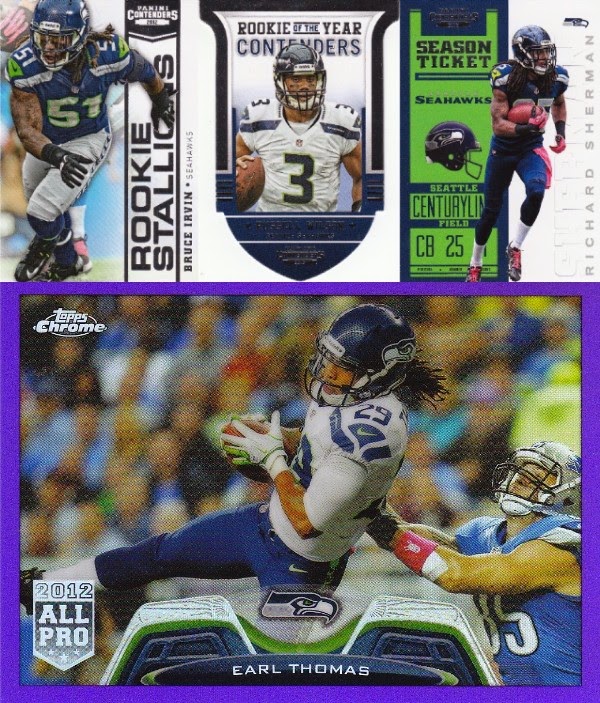 And finally... a quartet of Seahawks inserts, parallels, and my very first Richard Sherman rookie card.  You have no idea how excited I am to add this card to the Seahawks PC.

Stay tuned... I'll be shipping a package of Mets, NY Giants, NY Rangers, and Blue Jays for your collection in the next few days.

Happy Thursday and sayonara!
Posted by Fuji at 11:30 PM 5 comments:

Matt over at Bob Walk the Plank is always one step ahead of me.  On Monday, I shipped out a few cards for his collection in hopes of evening things up between the two of us.  Next thing I know... there's another package from him waiting for me to open up.

Let's see what he sent this time around... 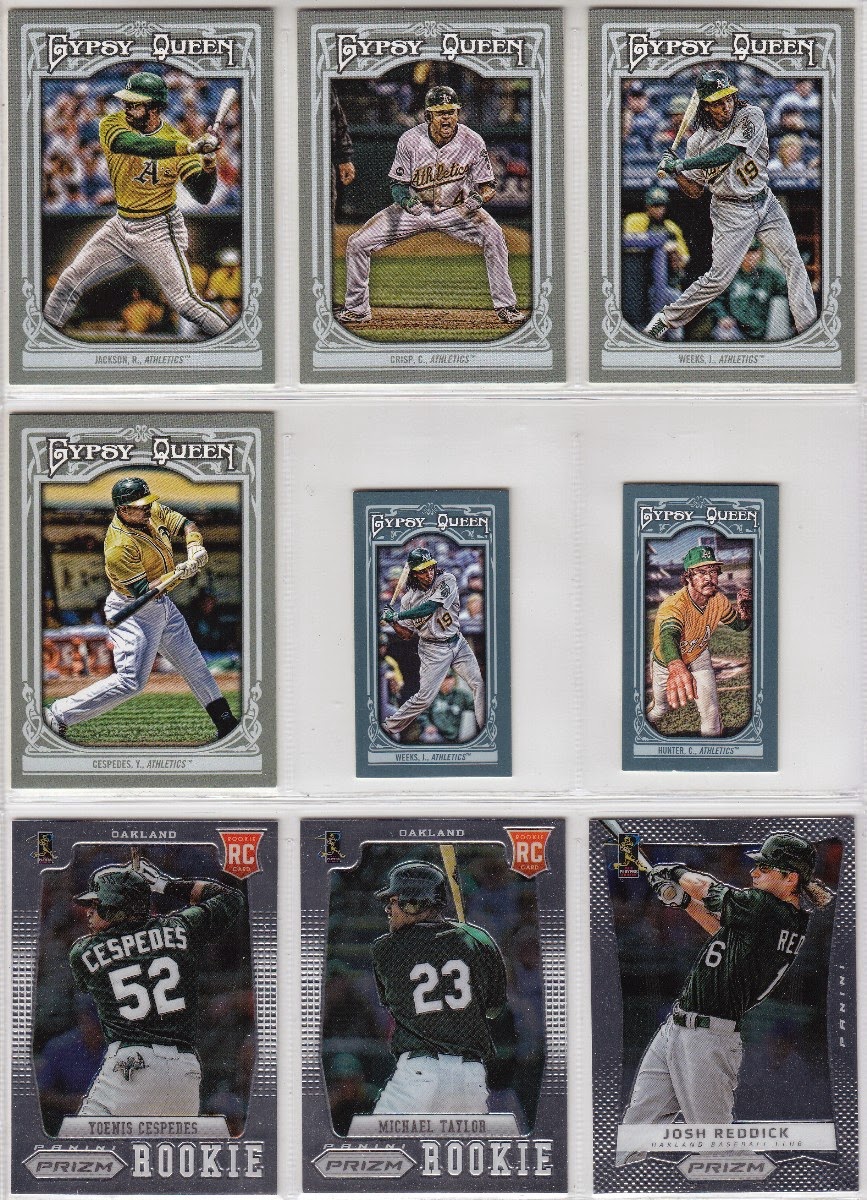 First up are a nice lot of Oakland A's, including a pair of Gypsy Queen minis and this awesome Sliding Stars insert of Rickey Henderson:

He also included this trio of Padres...

Last... but certainly not least... is my nineteenth Hideo Nomo memorabilia card: 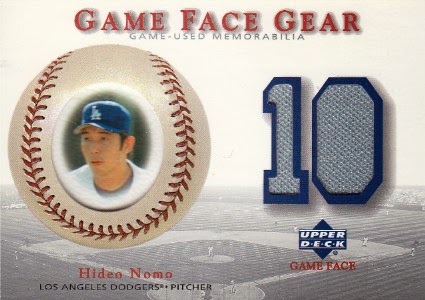 Dang this card is beautiful!

Thanks Matthew for another great package.  Don't worry... I'll even things out one way or another.  I'm currently on the lookout for some new Pirates for your collection.

Happy Thursday and sayonara!
Posted by Fuji at 7:30 PM 2 comments:

I've been reading about all of these cool packages from Mr. Hoyle... and yesterday I received a pair of my own.

The first package contained some vintage football and basketball cards.  First up are some 1975 Topps Packers for my collection and a trio of 49ers for my students. 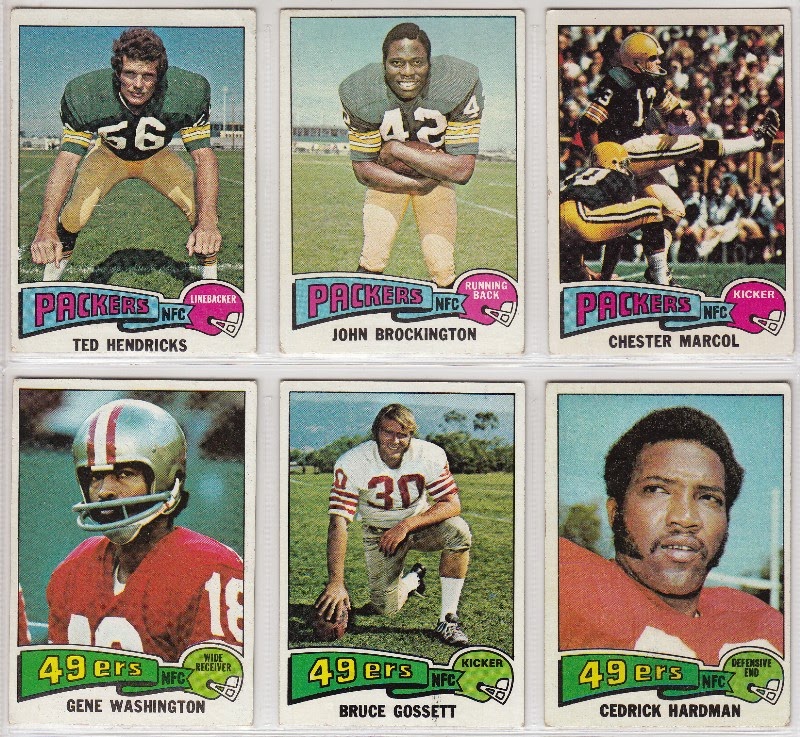 I don't have a lot of 70's Green Bay Packers, so all three of these guys will find a nice home in my binder. 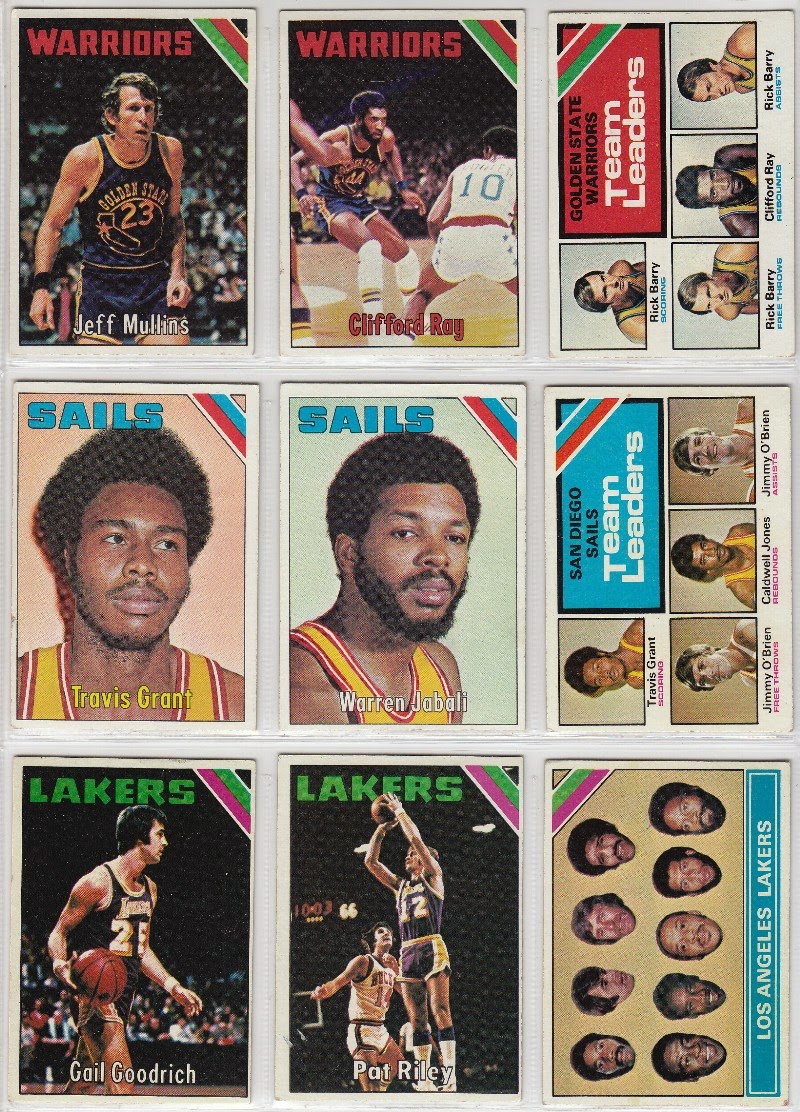 I pretty much stopped following basketball a few years ago, but I'll never turn away old school players like Ray, Goodrich, and Riley.  By the way... who the heck are the San Diego Sails?  Very... very cool.

The other package contained hockey cards...

I recently started a California Golden Seals PC, and these are my first three vintage cards in the collection.

In addition to the Seals, he also threw in some old school enforcers... including one of the greatest of all-time... Dave "The Hammer" Shultz.

Thanks for these amazing cards.  I hope you enjoyed the Red Sox, Ecks, and Pudge cards I shipped you.

Happy Thursday and sayonara!
Posted by Fuji at 4:00 PM 2 comments:

I've been ordering Green Bay Packers Police Sets from Larry Fritsch Cards for a few years now and have most of the sets from 1998 to 2012.  One of these days, I hope to acquire all of the sets dating back to 1983 when they were first produced.

Thanks to Tony over at Off Hiatus Baseball Cards I now have one less set to track down.  He recently contacted me and offered up his 1984 set.  In return, he asked for some 1995 to 2007 Milwaukee Brewers cards.

So on Saturday, I spent a solid hour digging through stuff and finally found enough cards to keep things fair.  Three days later, my set arrived.

It contains twenty-five cards and features a simple, attractive card design.  As with many police sets, the cards offer advice, rather than statistics.  Here's a look at one of my all-time favorite Packers: 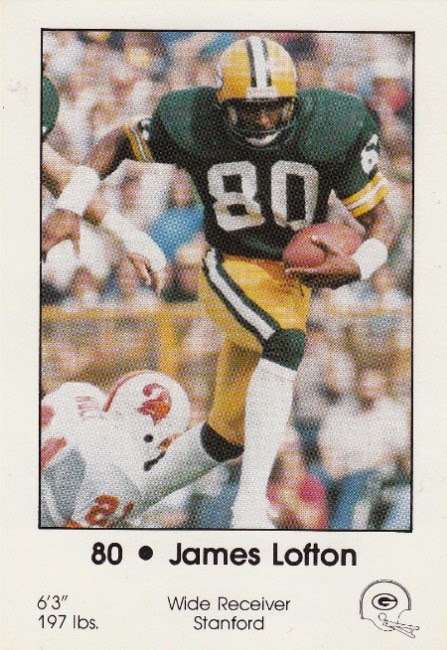 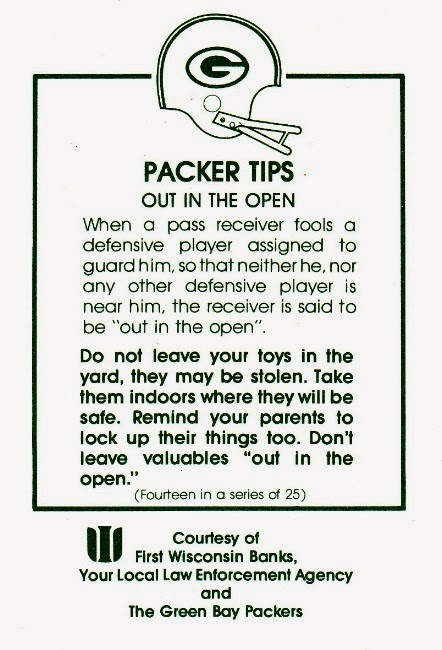 I grew up following the Green Bay Packers, because my parents were fans.  So it's cool to see some really big names from the past. 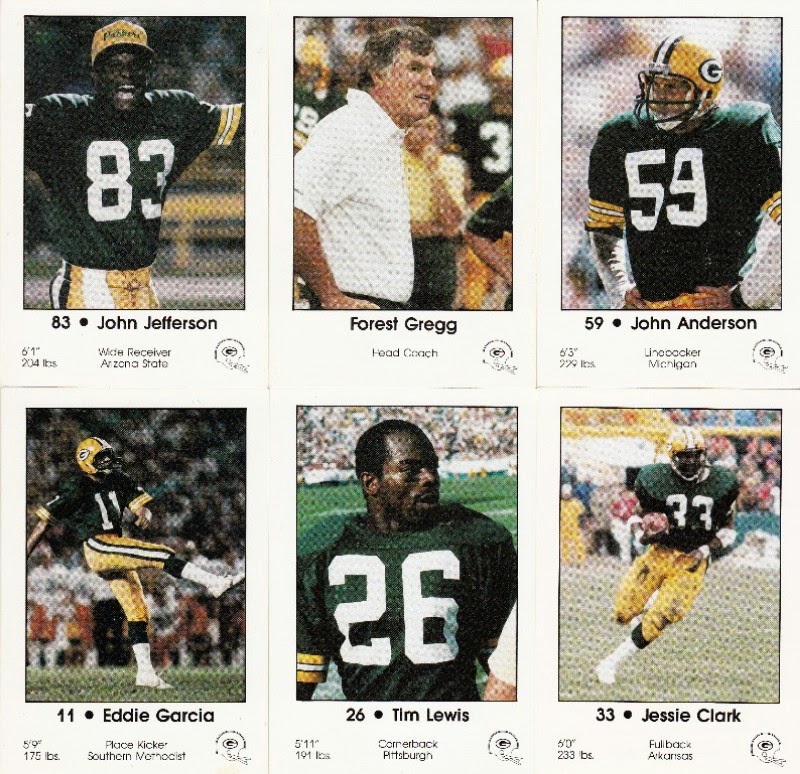 We were all pretty excited to hear that the Packers traded for John Jefferson in the early 80's.  Paired up with Lofton, they were nice targets for Lynn Dickey. 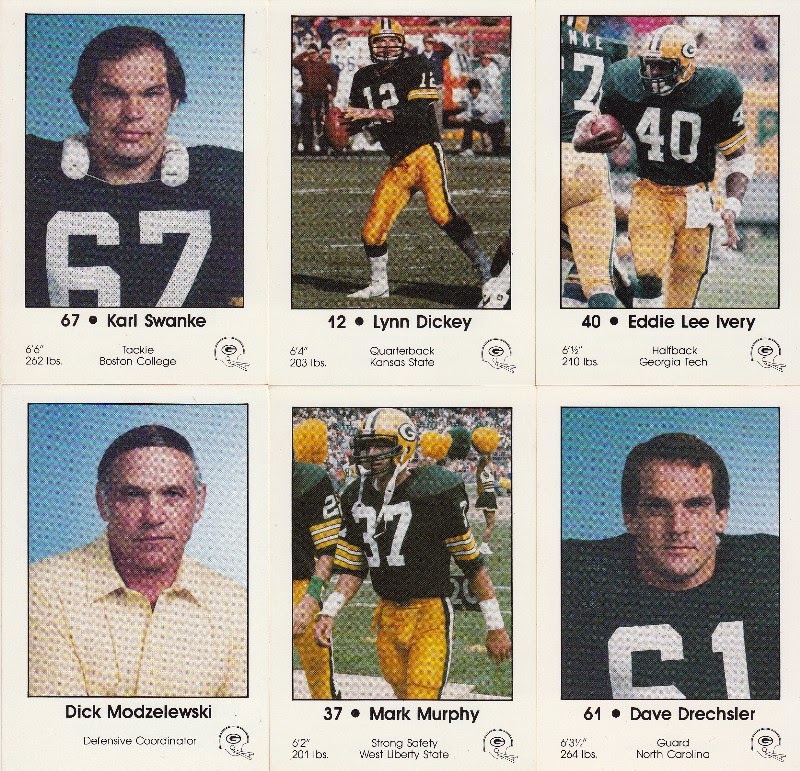 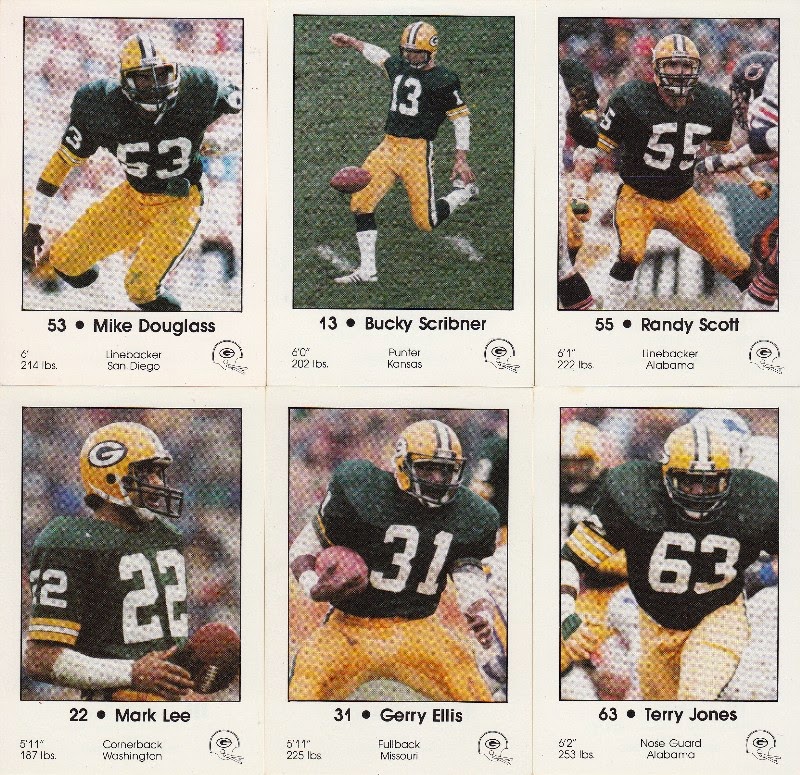 It's funny how certain players stick with you your whole life.  Bucky Scribner only played in Green Bay for two seasons and he was their punter, but I still remember his name.  I'm pretty sure this is my only Bucky card. 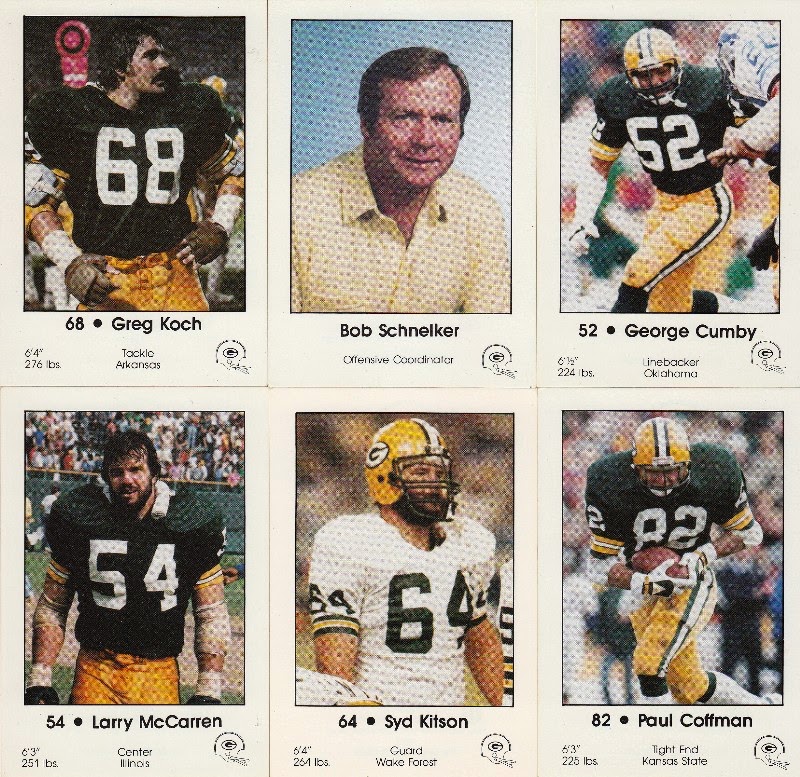 I'll wrap things up with Paul Coffman.  Ever since I started following the Packers, they've been solid at the tight end position.  Ed West, Mark Chmura, Bubba Franks, and Jermichael Finley have all been solid contributors to their offense... but the player I've always compared them to was Coffman.  The only person who kept him from being my favorite player as a kid was James Lofton.

Thanks Tony for offering to part with this very cool oddball set.  It sure brought back excellent memories.  I look forward to trading with you again in the future.

Happy Thursday and sayonara!
Posted by Fuji at 12:00 PM 6 comments:

Forty years ago, the San Diego Padres were on the brink of becoming the Washington Padres.  Thankfully Ray Kroc swooped in, purchased the Padres for a reported twelve million dollars, and kept the team in San Diego. 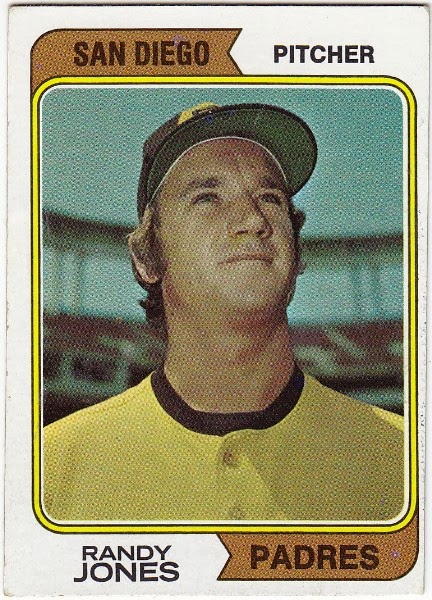 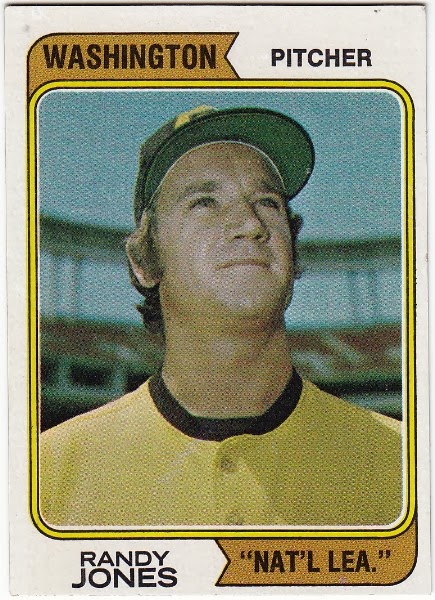 Now this might not seem like a big deal to you... but there's a chance my whole outlook on baseball could have been changed forever had they moved to Washington D.C.  How, you ask?  It's pretty simple. 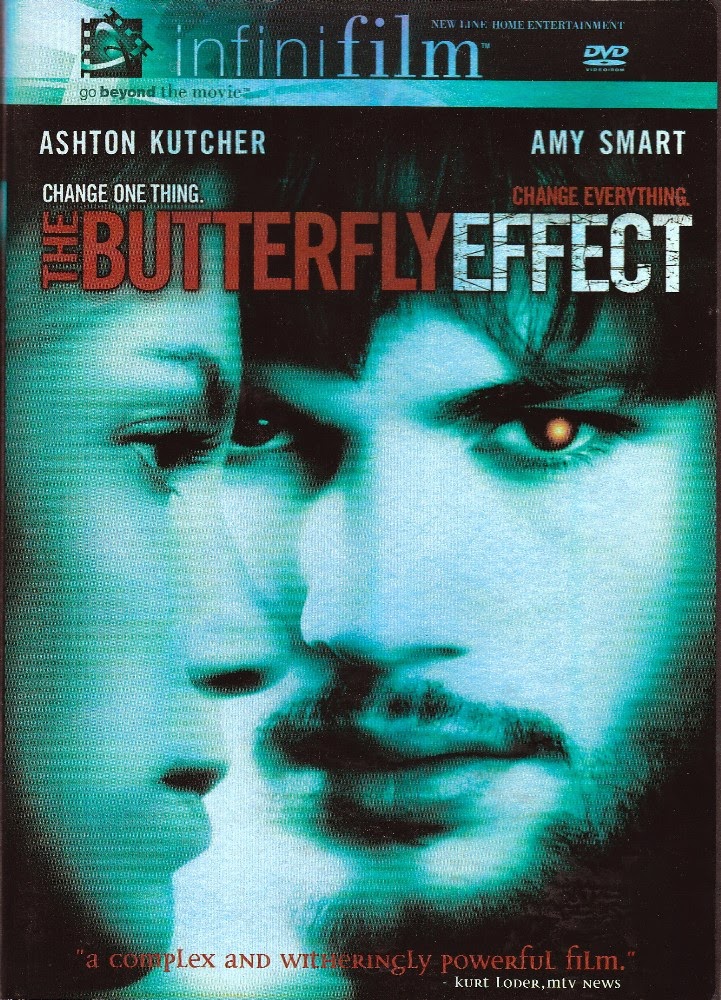 Anyone who has seen the movie "Butterfly Effect" knows that one small change of events can result in much bigger changes down the road.  For example... if both of my parents hadn't left Hawaii to attend college in Wisconsin, there's a strong possibility that they never would have met.  Which means... I wouldn't have been born and this post wouldn't have been published.  The same rule applies to the Padres staying in San Diego. 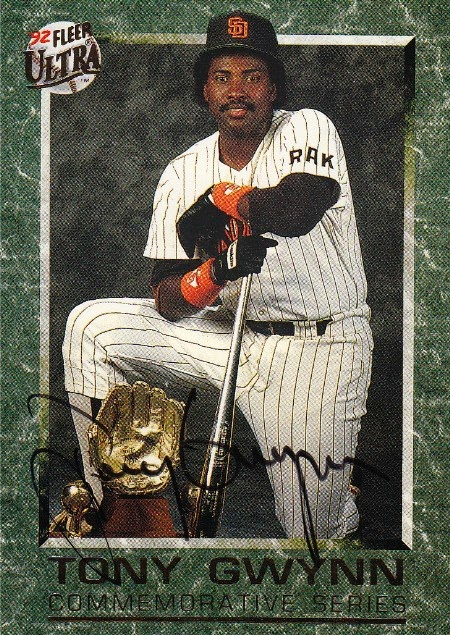 In 1981, the San Diego Padres drafted my favorite baseball player of all-time... Tony Gwynn.  But had the Padres moved to Washington... things might have turned out differently.  New ownership might have had a different draft philosophy.  Maybe they would have been somewhere else in the 1981 draft order, which could have led to Gwynn being drafted by another team.  Or what if the Washington Padres targeted a guy from the mid-Atlantic region of the country instead of this Southern Californian who attended San Diego State University.

Any of these situations would have changed my life forever... because Tony Gwynn is the only reason I became a San Diego Padres fan.  Who knows... maybe I would have been a Cincinnati Reds or Los Angeles Dodgers fan.  Wait.  That makes me appreciate Mr. Kroc even more.

Thanks Ray Kroc!  You literally changed my life.

Happy Tuesday and sayonara!
Posted by Fuji at 9:00 AM 8 comments: