State of the Office 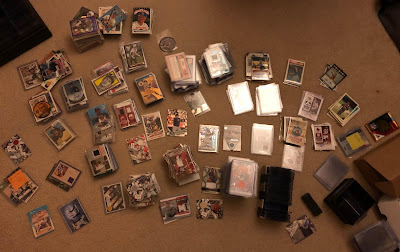 Like Billy Ocean once sang... when the going gets tough, the tough get going.  Sadly I'm as soft as a marshmallow.  With each passing day, more stuff continues to pile on my plate and card related items are not exempt.

Last week, I wrapped up sorting the collection I purchased in September and focused on care packages.  Then on Friday, my Sportlots order, which contained set needs started arriving.  So I paused on the care packages for the umpteenth time to get the set situation under control.

On Saturday, I spent the day at the card show... which resulted in a few more stacks of cards that needed to be sorted and cataloged.  Plus standing up and sitting down didn't do my sore back any favors.

Then on Sunday, the news of Kobe Bryant broke and an emotional component was added to the formula.  In short, I'm physically and mentally burnt out.

I know most collectors look forward to sitting down with their cards, but when I came home yesterday from work... the last thing I wanted to do was open the door to my office and see stacks of cards laying all over the place.  My body and mind told me to lay down on the floor and listen to episodes of The Office or a podcast.  And that's exactly what I did for an hour or so.  Then I went upstairs and continued the process of scanning, cataloging, and sorting for another hour or so.

Collecting is suppose to be fun.  My office is suppose to be my Fortress of Solitude.  A place for me to hide out and relax, while being surrounded by sports cards.  It's starting to feel more like an actual office space.

I'm looking forward to reaching the light at the end of the tunnel.  At that point, my desk and office floor will be clear, cards will be sleeved or put into boxes and binders, and care packages will have been shipped.  My plate will finally be clean and I can look forward to some dessert.

Happy Tuesday and sayonara!
Posted by Fuji at 3:00 PM 5 comments:

No Shame In Crying

When I heard about the helicopter crash that took Kobe Bryant's life, along with the lives of eight others including his 13 year old daughter... I was shocked.  I didn't believe it.  Or maybe... I didn't want to believe it.

I went into my office, closed the door, and started scanning cards I purchased at the card show the day before.  It didn't take long for other friends to start texting me the news and checking in to see if I was okay.  Most of my close friends know that once upon a time... I was a longtime Los Angeles Lakers fan and Kobe was my favorite player.

I replied the same thing each time.  I'm in shock.  And down inside, I was hoping that it was just a rumor or "fake news". 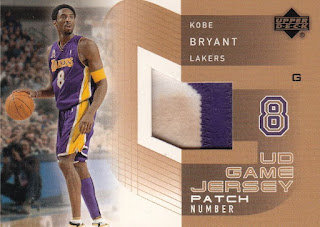 After about four hours, my back could no longer take the sitting down, so I went downstairs and decided to see if ESPN had published anything.  They had.  It started to sink in as I read their article.  Simultaneously, I thought about my mom.  I thought about Tony Gwynn who was another favorite athlete of mine taken away way too soon.  And I thought about my students who are about the same age as his daughter.  That's when the eyes started to tear up.

The article led to me to search out the moment of silence before the Denver/Houston game on YouTube.  Then I watched the Raptors and Spurs each run out the 24 second clock to honor The Black Mamba.  And that's when I lost it.

I was a complete wreck.  I can't even begin to imagine what Kobe's daughters, wife, family members, and friends are going through during this time of sorrow.  But my heart goes out to all of the families and friends of the victims of yesterday's tragic accident.

By the way, my apologies to Adam (ARPSmith's Sportscard Obsession) and John (Johnny's Trading Spot).  I've received both of your packages and will try to publish a recap in the very near future.  Very sorry for the delay.
Posted by Fuji at 8:24 AM 10 comments:

Wounded Yet On The Prowl

This short week was a little crazy.  Yesterday marked the end of the first semester and I've been busy trying to grade those board game projects, help my students figure out next semester's electives, and wrapping up loose ends... while at the same time nursing my decrepit body.

If you know me... then you know I have back issues.  And while sorting cards last weekend, I tweaked it again.  At this point, I've come to accept it.  Unfortunately... the timing is really bad.  Today is the Serramonte Mall Sports Card, Toys, and Collectibles Show.

I'm still planning on attending, but I'm not sure how long I'll be able to stand hunched over dime boxes.  My goal is to hang out at my friend's table a little, grab lunch, walk the mall once, then head home.

Although I hit up the ATM last weekend, I don't anticipate spending too much money today.  However, I am secretly hoping I stumble across some affordable and clean 1970 Kellogg's baseball singles.

I've been in contact with Matt over at Run-Fore!-Kelloggs Baseball Cards and he's willing to sell me a nice starter set for a reasonable price... which has inspired me to build this dream set.  I normally don't take on projects like these, but I love that year's card design... and I've accepted that this will be one of those slow builds that might take the rest of my life.

Well that's it for today.  Happy Saturday and sayonara!
Posted by Fuji at 3:00 PM 18 comments:

After seeing Barry Bonds and Roger Clemens fall short again for the eighth time, I decided to see how many MLB players in the history of the National Baseball Hall of Fame voting have received 50% or more votes at least once and are still waiting for their ticket to get punched.  Any guesses?

If you guessed "5", then you sure know your baseball trivia.  Barry Bonds, Roger Clemens, Curt Schilling, and Omar Vizquel are four of the five.  The fifth?  Gil Hodges.

Here's a look at the breakdown of how the Baseball Writers Association of America voted during the fifteen years he was on the ballot:

Hodges broke the 50% barrier eleven times.  What so significant about that percentage?  Well from 1936 to 2015... every player who reached the 50% mark in hall of fame voting at one point or another eventually received the call to the hall.

I'm not going to sit here and argue whether or not he deserves to be enshrined in Cooperstown.  My vote doesn't count.  But maybe Night Owl is right.  Gil Hodges has been forgotten by the people whose vote does count.

Happy Wednesday and sayonara!
Posted by Fuji at 6:00 AM 11 comments:

It's one thing to watch your team get blown out in the playoffs, but it's 10x worse when it happens against a team you don't like.  Watching yesterday's NFC Championship Game was an emotional roller coasters.  Things started off with me being pumped, then I quickly became annoyed, and before long it was just disheartening.  I literally was sick to my stomach by the middle of the 2nd quarter.

I'm ashamed to admit this... but after Aaron Rodgers fumbled the ball... I went upstairs and tried to drown myself in something usually brings me happiness: baseball cards. 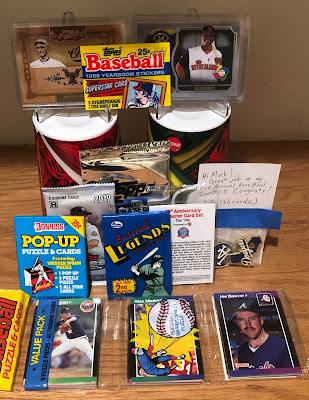 And it kinda worked.  I used the extra time to open up a contest package I received from Andy over at Stadium Fantasium.  For the past two years, he has held a Rose Bowl Contest on his blog... and for the second year in a row... I have taken home a prize package.

The contest was actually three contests with multiple prize packages.  I won the Gold Contest by predicting the winner of the Rose Bowl and guessing the closest margin of victory without going over.  This allowed me to choose the first three prize packages.  Here's what I went with... 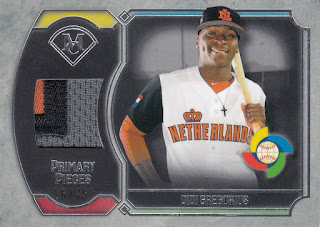 Yup.  I'm one of those guys who still appreciates memorabilia cards.  This patch of Didi immediately caught my eye and I'm stoked to add this to my collection.

In addition to the patch relic, there was also a pack of 1989 Donruss Pop-Up cards... 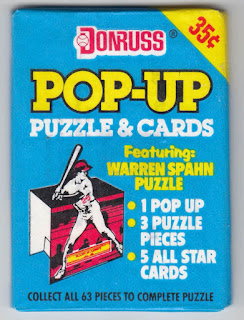 If I can get my act together, maybe I'll open this up and share it over on A Pack To Be Named Later.  It's been way too long since I last wrote a post over there. 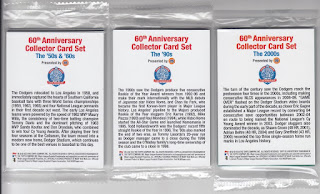 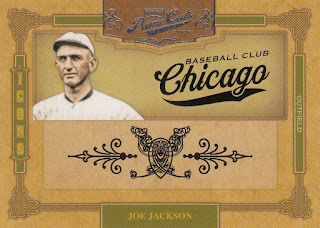 This Joe Jackson card was the key to choosing this prize lot.  No I haven't started super collecting Shoeless Joe, but I was excited to see that this card is serial #'d 01/25 on the back: 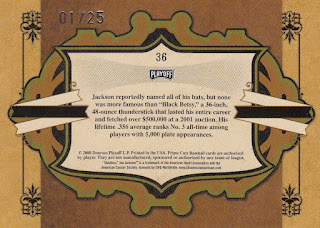 This is a very nice addition to my Prime #'s PC.  The other card included in the prize lot was this shiny refractor of a Kyle Hendricks...

If you look at the background, you'll see Chicago Cubs fans are seated, but the Green Wave Refractor sort of creates an ivy feel to this card and I like it.

I was also very fortunate to be chosen co-winner of the Silver Contest along with Jon over at A Penny Sleeve For Your Thoughts.  He picked a pair of Football Prize Lots for his winnings.  I went with more baseball...

Someone has already cracked a pack of the yearbook stickers over on APTBNL, but I don't see any reviews on the first two packs.  Possibly more writing material?  We shall see. 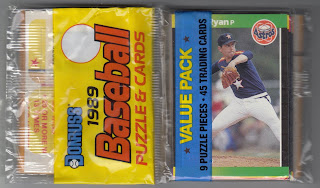 I wrapped up my prize selections with two more packs of baseball.  I'm really excited to see if I can pull a Fernando Tatis Jr. rookie card from that pack.  As for the 1989 Donruss rack pack... I'll be shipping it off to SumoMenkoMan... who collects the Ryan Express.

Thank you Andy for hosting another generous contest.  I'm super excited to sit down and tear into these packs.  And now that I'm a little less distraught... congratulations to San Francisco 49ers and Kansas City Chiefs fans.

And one more thing... 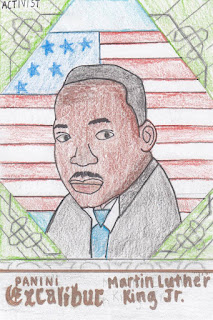 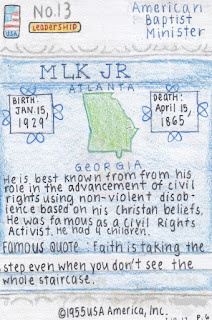 A huge shout out to all of the civil rights leaders who have stood up against injustice and fought for equality among humanity.

Each February, I teach a unit on America's Civil Rights Movement and my students design trading cards for their favorite leaders.  This Martin Luther King Jr. was based on the 2015/16 Panini Excalibur basketball design.

Well that's it for now.  Happy Monday and sayonara!
Posted by Fuji at 8:00 AM 10 comments: