In honor of Mr. Jackson's 50th birthday, I figured I'd show off my Bo Jackson Broder set: 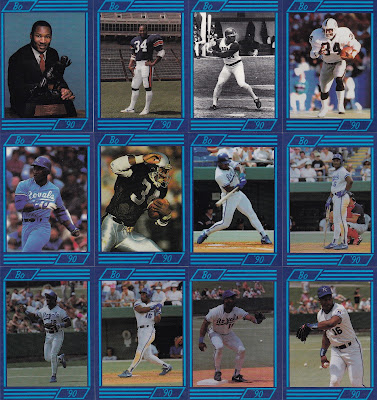 It's not the prettiest looking set... just a simple design.  If you're unfamiliar with Broders, they are essentially unlicensed cards that have little value.  However... if you collected cardboard in the 80's you probably had one or two sitting in your collection at some point in time.

I found the set in a box I purchased at the flea market a few weeks ago: 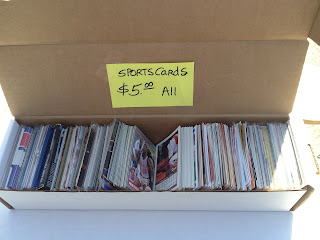 There wasn't anything too special inside of the box except for this Broder set, a few low end inserts, a partial 1993 Hostess baseball set, and a Frank Thomas Barry Colla set which I'll feature in the future.  I compared the box to one of those Fairfield packages you find at Target and for $3 (I haggled with the dealer)... it was worth the price.

"Look, you don't understand. There was shrinkage."

Who says "bigger is better"?  I mean seriously... sometimes the best things really do come in small packages.  Today's post covers a handful of my favorite miniature baseball cards.

We'll kick things off with a little piece of metal:

Eight years after Han Solo's capture... Benito was been encapsulated in carbonite.

Next up is my 1986 Fleer Miniature Jose Canseco:

These cards were distributed in 120 card factory sets that included miniature stickers as well.

Are you attracted to tiny, shiny cardboard?  Then you might enjoy the 1993 Topps Micro Prisms: 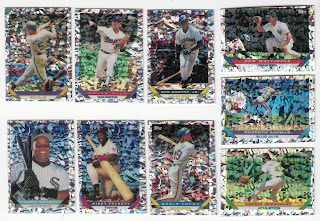 Try not to stare too long, or you'll go blind.

Parallels aren't your thing?  How about a tiny oddball issue?  In 1989 Topps tested the market with miniature cards encapsulated in plastic.  The set featured all-stars and paired their Topps base card with the player's rookie card.  Here's my Kirby Puckett: 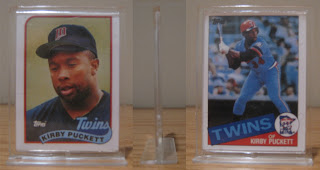 Speaking of rookie cards... here are a pair of Allen & Ginter mini's:

Allen & Ginter, Gypsy Queen, Kimball Champions each have mini's... and they all fall under the same category:  Awesome!

Let's wrap things up with possibly the coolest test issue ever produced... the 1975 Topps Minis:

I purchased the Robin Yount rookie card from this set in the early 80's and for years it had been sitting in a box inside of a desk drawer.  It's one of my "untouchables".  I never plan on selling it or trading it.

I could go on and on... because there are plenty of cards that are smaller than your standard 2.5" x 3.5" piece of cardboard and each of them need to feel loved too.  So think twice before you "point" and "giggle" at their size.

What are some of your favorite miniature pieces of cardboard?

Happy Wednesday and sayonara!
Posted by Fuji at 3:00 PM 19 comments:

This Guy is a HOFer in my book! 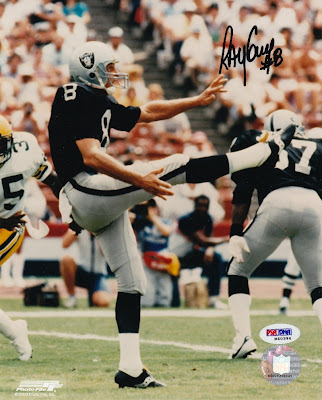 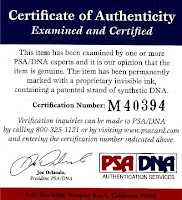 Ray Guy is a member of the NFL's 75th Anniversary Team.  There's an award named after him given to the top collegiate punter each year.  And he's a 5x HOFer:

Unfortunately... he's still waiting for the call from Canton.  At this point in the game, his only hope is the senior selection committee.  And things don't look good for Mr. Guy... which is sad, because he's a 7x Pro Bowler, 3x All-Pro, and a 3x Super Bowl Champion.

My opinion won't influence anyone with the ability to make a difference, but I just wanted all of you to know that Ray Guy is a HOFer in my book.

What are your thoughts on punters in the Pro Football Hall of Fame?

Boxing hasn't been my thing in over a decade.  Outside of a few Pacquiao fights, I can't remember the last boxing match I watched.

But there was a time when my buddy and I would watch all of the big fights:  Tyson vs. Spinks, Leonard vs. Hagler, Holyfield vs. Bowe, Taylor vs. Chavez, Lewis vs. Holyfield, Tyson vs. Holyfield, and of course... Julio Cesar Chavez vs. Hector "Macho" Camacho.

Chavez dominated the fight and won by unanimous decision after 12 rounds, but the fight was a historic one and one I won't forget.

Here... see for yourself: 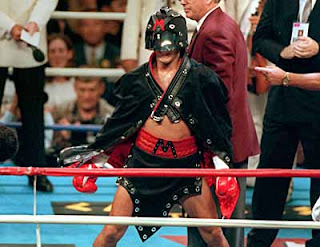 The boxing world will truly miss the Macho Man, but at least there are plenty of pieces of boxing memorabilia to remember him by.  Here are some of his cardboard I acquired over the years:

I'm boycotting Black Friday!  In fact, I'm starting a petition among cardboard collectors to switch it to Fuchsia Friday.  So instead of searching for deals among mobs of shoppers, I'll be recovering from yesterday's food hangover by posting some of my favorite 70's cards featuring "fuchsia".

And just in case you're not a baseball fan, Topps made sure to included fuchsia on their 70's basketball and football cards too.

So... what do you think?  Are you down to join the movement?  C'mon... show off your fuchsia and let people know that...

What?  You're not down to represent Fuchsia Friday?  Okay, go ahead...


What are some of your best Black Friday purchases?

In a few minutes, I'll be heading over to my friend's house to watch some football and pig out on food.  But before I do, I wanted to take a few moments to reflect what I'm thankful for...

I'm thankful for my family and friends.

I'm thankful for my health.

I'm thankful for my job and my students.

I'm thankful for my cars, computers, and cell phone.

I'm thankful for this one week vacation.

I'm thankful that both the Seahawks & the Packers are in the playoff hunt.

I'm thankful for the success the 2012 Oakland Athletics experienced.

I'm thankful for The Walking Dead, The Big Bang Theory, and Game of Thrones.

I'm thankful for this hobby.

I'm thankful for my collection.

I'm thankful for vintage base cards.

I'm thankful for your blogs.

I'm thankful for this blog.

And last, but not least... I'm thankful for everyone who takes the time to read my posts.

I hope all of you enjoy a safe holiday season with your families and loved ones.


Happy Thanksgiving!
Posted by Fuji at 9:00 AM 3 comments:

No logos? No problem! 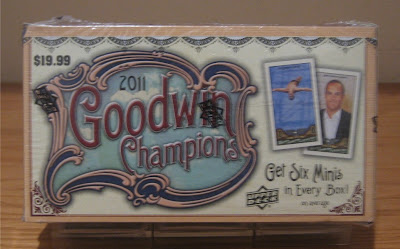 I'm not usually a fan of sports cards without team logos.  And I'm not usually fond of retail blaster boxes either.  Plus... with the holiday season rapidly approaching, money is tight and I really shouldn't be gambling.

But every now and then, when you have an itch... you've got to scratch it.

That's what happened when I picked up a box of 2011 Goodwin Champions earlier this month.  The box contained 12 packs and each pack contained 4 cards. 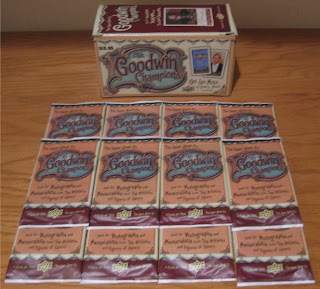 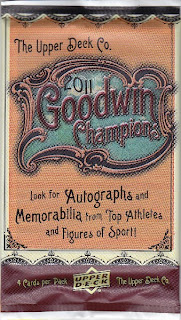 I'll spare you some time and get to the good stuff.  I pulled a stack of base cards and here were my three favorites:

As with most products, there were hits and misses with the artists' renditions of the athletes.  These were (in my opinion) the biggest hits.  Hobgood has his pipe, Rodman has his tats, and Ryan has his longhorn.  Simply amazing.

Minis are seeded at a 1:2 pack rate.  Here are the six I pulled: 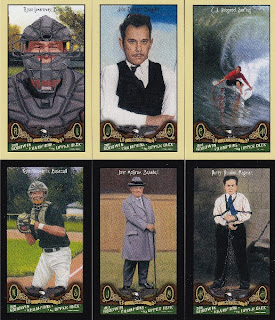 Since this is the first time (and probably the last) I've opened this product, I'm guessing that the black bordered, Lady Luck minis are just as common as the regular back minis.  Collation was interesting as I pulled the regular sized Dillinger, McGraw, Houdini, and Hobgood to go along with their miniature counterparts.

I also pulled this cool die-cut Figures of Sport insert of The Wizard: 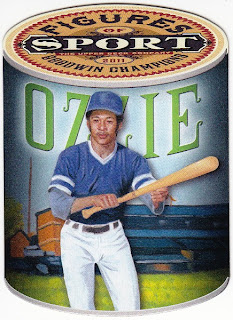 There were no mention of these inserts on the wrappers, but according to Beckett they fall into 1:21 hobby packs.  I wonder what the retail odds were.  Either way, it's a sweet card.  Although, I wish the artist would have put Ozzie in a yellow and brown uniform.

And if the Ozzie wasn't cool enough... I also beat the odds and pulled a memorabilia card of one of the greatest defensemen to lace up a pair of skates: 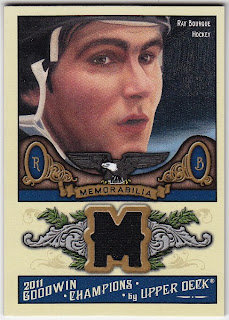 The whole point of purchasing this box was to brighten up my day and that's exactly what happened.  I probably won't be busting any newer product anytime soon, but I have a few 80's oddball products I'll share with you in the next few weeks.

Happy Wednesday and sayonara!
Posted by Fuji at 9:00 AM 2 comments: