The past few days have kinda sucked.  On Tuesday, I strained my back for the umpteenth time while getting ready for work and I can't even parallel park my car or pick up a dry erase marker without grimacing.

But it's happened enough the past ten years that I'm starting to accept it as part of my life.

In terms of cards, I haven't been able to sit down and sort cards.  Heck... the majority of my free time has been laying down on the floor, looking up at the television, while doing a variety of stretches.

I stuck around work a little longer today in order to finally publish a post.  I was thinking about how I could relate cards to my messed up back, when I remembered Amelie Mancini's (Left Field Cards) and her cool custom sets.  She's made a few different series of baseball card sets and one of them targets baseball players who suffered weird sports injuries. 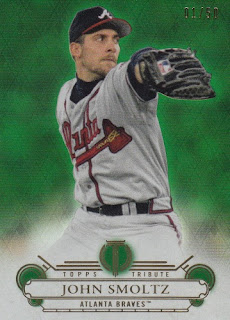 Did you know that John Smoltz once scalded himself while ironing a shirt?  Well according to Mancini he did. 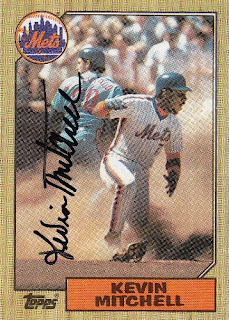 That's where I also learned about Kevin Mitchell straining a muscle while vomiting. 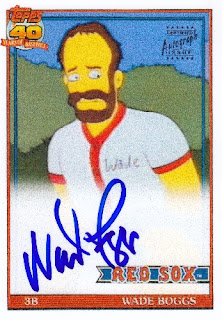 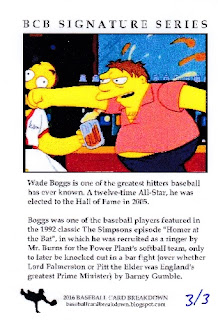 And one time... Wade Boggs strained his back just like me.  Only he did it while taking off his cowboy boots.  I strained my back while putting on shorts.

Boggs bounced back and had a hall of fame career... so the least I can do is bounce back and catch up on blogging and reading all of your posts.  Just give me a few days.

Happy Thursday and sayonara!
Posted by Fuji at 4:38 PM 13 comments:

I collect a lot of different stuff.  I have player collections.  Team collections.  I collect special serial numbered cards.  Sketch cards.  Left-handed athletes.  People born and raised in San Jose.  Surfers.  Japanese athletes.  Seriously... the list goes on and on.

On one hand, it's nice because when I get bored or overwhelmed with one collection, I can easily take a break and turn to another collection.  On the other hand, sometimes collections get lost in the shuffle... and it takes a care package from a fellow blogger to remind me that I collect certain things.

A few weeks ago, Jim over at cards as i see them sent me a PWE that contained the first addition to my Damaged Card PC in a long time: 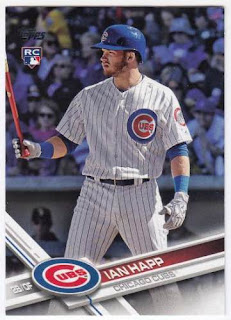 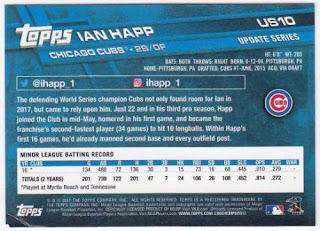 Over the years, I've come across a fair share of damaged autographs, memorabilia cards, inserts, parallels, and rookie cards that I just didn't have the heart to throw away.  I started stashing them in a box, but eventually I dedicated a binder to them.

You might not notice the damage on the Ian Happ, but if you look closely to the bottom left-hand corner on the back, you'll see this: 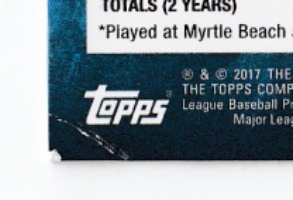 Now Happ didn't exactly have Aaron Judge or Cody Bellinger's numbers, but his twenty-four home runs earned him some recognition as a rookie.

Congratulations Ian.  You've earned a spot next to Randy Johnson and Ken Griffey Jr. in the rookie card section of my binder.

Another collection that I have neglected over the past few years has been my Kurt Suzuki PC.  He's still my favorite baseball players.  But since he doesn't have a lot of new autographs or memorabilia cards, I just haven't targeted his stuff lately.

Thankfully Jim sent me this: 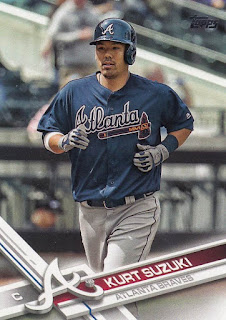 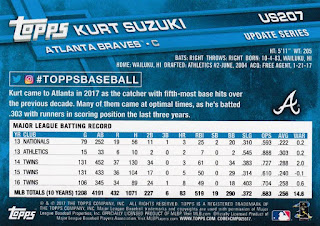 It's the first card of Suzuki in my collection that features him as a Atlanta Brave.  I had no idea that he has the fifth-most base hits as a catcher over the past decade.  Kudos to Topps for pointing that out to me.

Rounding out Jim's PWE were a pair of Athletics and another new card for my Japanese Player PC:

Thank you Jim for the friendly reminder.  Although I won't actively target cards for my Damaged Card PC, I am heading over to COMC to see if I can add at least one new Suzuki to my collection.

Happy Monday and sayonara!
Posted by Fuji at 3:30 PM 7 comments:

I think one of the reasons I've enjoyed card collecting for over three decades is my OCD (obsessive-compulsive disorder).  In fact one quick look at the characteristics that many people with OCD share and it's pretty obvious.  Many of us like to sort, count, put things in order, clean, organize, and follow a strict routine.

For example... for years I've had a very strict routine on how I store my autographs and memorabilia cards.  I put the card in a penny sleeve, then slide the penny sleeve into a top-loader, and finally insert the top-loader into a team bag. 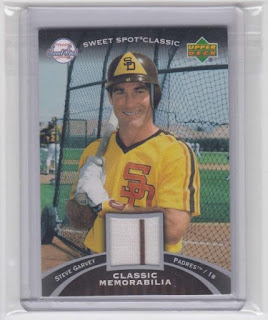 This system has worked for years, but it always bothered me that the team bags were too wide, which forced me to store them in an angle in my BCW Super Monster Boxes (right column): 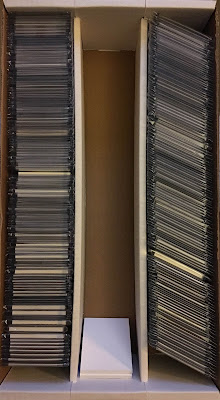 Then a few months ago, I watched a video on YouTube and the guy showed off something called Perfect Fit sleeves.


They're similar to Ultra Pro team bags, except for the sleeve is a little thicker and is much narrower: 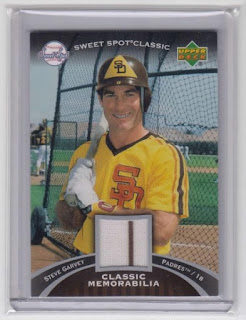 Here's a side by side comparison:

It may not look like that much of a difference, but the Perfect Fit sleeves are almost one centimeter narrower, which makes a huge difference.

Unfortunately... my OCD issue hasn't entirely been solved.  Transitioning from Ultra Pro team bags hasn't been cheap.  Each 50ct. package is $2.49.  Plus the BCW Super Monster Boxes that I use are designed for top-loaders that aren't bagged. 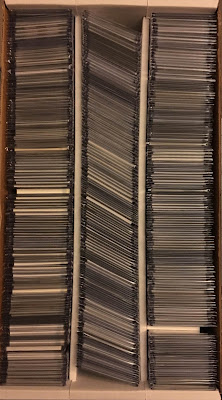 So even though the Perfect Fit sleeves are narrower, they not quite narrow enough.  The good news is that I no longer need to store all three rows at an angle.  The bad news is that the middle row's angle looks a little more severe than before.

Overall the Perfect Fit sleeves allow me to fit more top-loaders into each box, but there's still room for improvement.  However that's really up to BCW and their Super Monster Boxes design.  If their rows were a tad bit wider all of my OCD issues would be appeased.


How do you store them?

Happy Saturday and sayonara!
Posted by Fuji at 6:05 PM 10 comments:

I hope all of you are having a memorable Thanksgiving with your family and friends.  It's the one day of the year when you're allowed to stuff your face, sit back, watch some football, and take a long nap without anyone judging you.  Well... at least in my family. 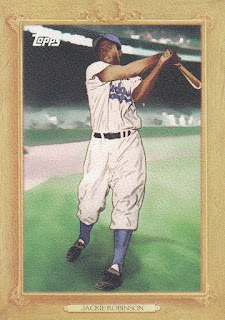 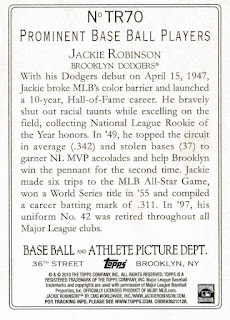 Enjoy your turkey feast.  I know I am.

Happy Thanksgiving and sayonara!
Posted by Fuji at 5:15 PM 7 comments:

Every November millions of men (and women?) around the world grow mustaches to support the Movember movement, which is an annual event to help raise awareness of men's health issues.  I've tried to grow a mustache a few times, but never followed through.  This year, I forgot about it until we were two weeks into the month.

The goal is to participate next year regardless of how silly I look.  Until then I decide to help by making a donation to the cause and thought it'd be fun to look back at some of the most famous mustaches in baseball history:  The Mustache Gang. 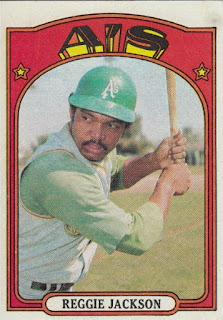 In March of 1972, Reggie Jackson showed up to Spring Training with a mustache.  Back then baseball was pretty conservative and being clean shaven was one of their unwritten rules.  Up until that time, only a handful of players were documented wearing a mustache during the regular season.  There were even a few teams that had policies written into their contracts against facial hair.

But Reggie was a rebel and when he arrived to Spring Training he had a full grown 'stache that he started growing in the 1971 ALCS.  According to teammates, his goal was to have a beard by Opening Day.

Charlie Finley, the colorful and controversial owner of the Oakland Athletics was originally not amused.  According to Mike Hegan, Finley told A's manager Dick Williams to tell him to shave it off.  Simply put... Reggie refused. 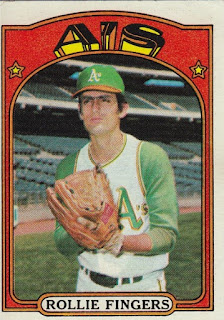 Although there are conflicting stories of how The Mustache Gang actually came to be, I figured I'd share Rollie Finger's version since he arguably has one of the most famous 'staches in baseball history. 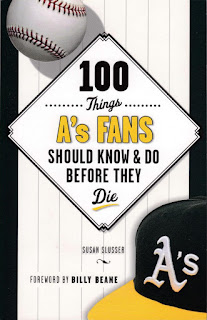 In the book 100 Things A's Fans Should Know and Do Before They Die by Susan Slusser, Fingers says that many of Reggie's teammates originally hated the mustache.

So one day while sitting in the bullpen Fingers, Catfish Hunter, and Darold Knowles came up with the idea to grow mustaches to annoy Williams and Finley to the point of making everyone (including Reggie) shave it off. 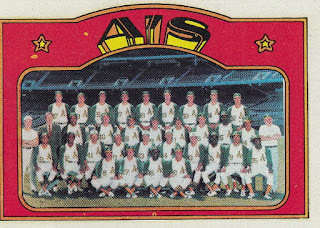 The plan obviously didn't work.  Eventually Finley embraced the idea of his players wearing them.  He even challenged his team to grow mustaches and offered $300 to any player who could grow one by Father's Day.  All twenty-five guys on the roster got paid.  Williams did too.

And that's how The Mustache Gang was born.


Have you ever grown a mustache?  Would you consider growing one next year to support Movember?

Maybe if there are enough of us, we could start our very own Mustache Gang.  Until then...

Happy Movember and sayonara!
Posted by Fuji at 3:00 PM 13 comments:

When I was building my Sports Card Trifecta of Jose Altuve, I struggled to determine his rookie card.  Should I have bought his 2011 Topps Update, because it has the official rookie card logo?  Or should I have purchased his 2010 Bowman Chrome Prospects card, because it's his earliest card featuring him in an Astros jersey? 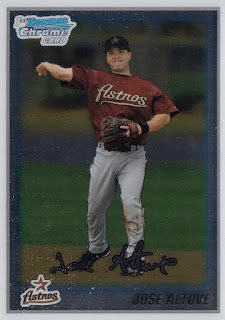 I decided to go with the latter, because when I was a kid I was taught that a player's first pack pulled, nationally distributed card produced by one of the major card manufacturers was his rookie card.

I realize that based on the current eBay sales between the two cards, I'm in the minority.  At least he doesn't have any Team USA cards featuring him as a 15 year old.  Or worse... he could have had four different rookie card logo cards in Update like Cody Bellinger has in this year's set.

Don't worry.  I'm not going to be a disgruntled collector or blogger who goes on an epic rant.  I just wish card companies would go back to the days when collectors could open a pack of cards and easily identify an athlete's rookie card.

For example... if someone gave you a pack of 1980 Topps baseball cards and you pulled this: 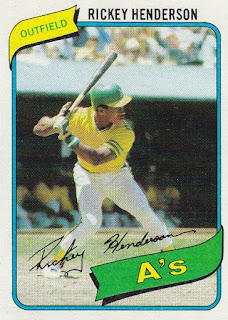 If you tore into a pack of 1983 Fleer baseball and discovered this: 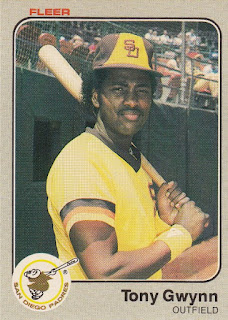 You'd know that you pulled a Tony Gwynn rookie card.

And if you tore into a pack of 1989 Upper Deck baseball and saw this: 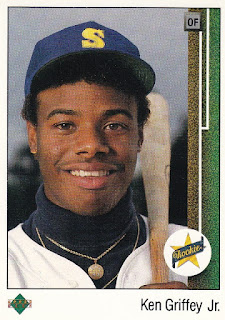 You'd know immediately that you were holding a Ken Griffey Jr. rookie card. 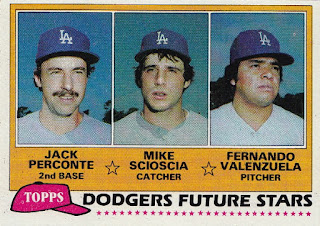 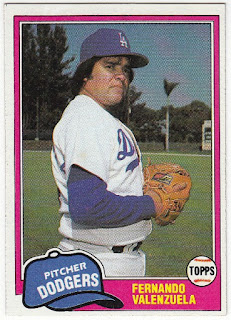 Even when Donruss Rookies, Fleer Update, and Topps Traded box sets added a layer of confusion to the mix, collectors were still able to decipher a player's true rookie card from his really cool Traded set card. 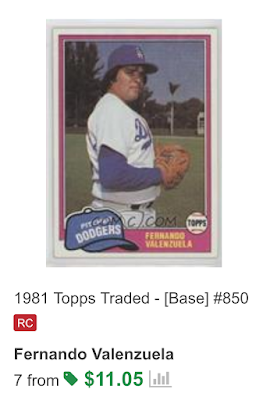 C'mon COMC... don't collectors already have enough on their plate with current rookie cards?  Stop the shenanigans and drop the RC tag.  80's rookie cards are suppose to be simpler to define.  Back then it felt like most of us were at least on the same page when it came to defining what a rookie card was.


Do you have a simple way to define a rookie card?

I feel like things would be so much better if we (collectors, card manufactures, grading companies, card shop owners, price guide websites, and everyone else involved in our hobby) could stand on common ground.

At the very least... it'd be less annoying.

Happy Sunday and sayonara!
Posted by Fuji at 3:00 PM 15 comments: