I've been to so many card shows in my lifetime, that I've lost track.  But when Tony over at Off Hiatus Baseball asked us about our favorite card show find, one card instantly popped into my head.  You see... it's my favorite card in my collection, so it's technically a "no brainer".  However... his question inspired me to look back at all of my card show purchases over the past few years to see what other cool things I have added to my collection.

Let's kick things off with a pair of honorable mentions and eventually work our way down the my best card show find... 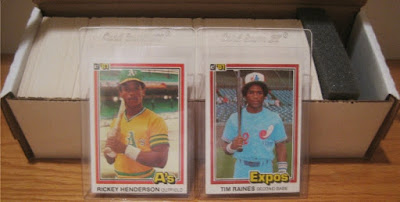 This was one of those sentimental purchases, because 1981 was the year I started collecting baseball cards.  I remember owning a handful of 1981 Donruss cards... my favorite being the The Mad Hungarian.  But I'll save that story for another post. 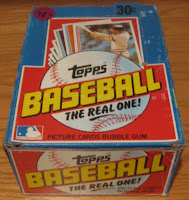 This is one of those purchases that may or may not come back to bite me in the butt.  $48 for wax box of 1982 Topps baseball is a steal if it hasn't been searched.  The packs look good, but I'm not an expert when it comes to unopened wax.  One of these days, the truth will be revealed and when it does... this might become one of my worst card show purchases. 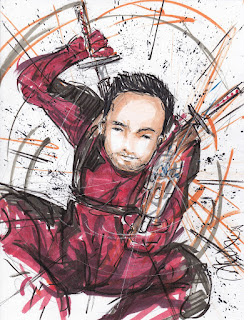 Bordin Marsinkul is an artist who sets up at every Serramonte Mall Cards and Collectibles Show.  I first met him back in 2012 and as soon as I saw his work, I knew wanted him to do something for me.  Twenty-five dollars later, he transformed me into Deadpool. 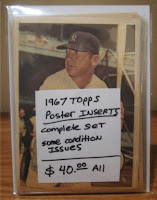 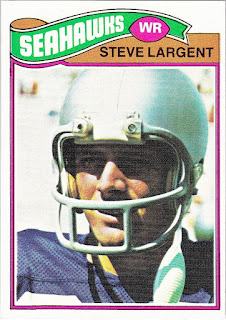 Steve Largent is my all-time favorite football player and I was totally pumped when I had the opportunity to add his rookie card to my collection.  It might seem like I overpaid, but the card was originally graded by PSA and received an 8.  I freed it from the holder, because it was all scratched up.

I purchased this off of my buddy who had Gwynn sign it at SJSU vs SDSU baseball game two years ago.  PSA was set up at the show, so part of my $70 went towards getting the autograph authenticated. 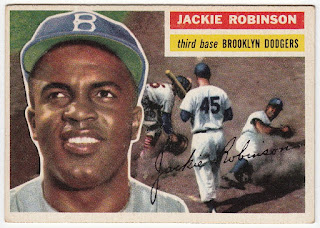 Thanks Tony for giving me another excuse to show off this beautiful work of art.  I love everything from the card design to the athlete featured and it's not just my favorite card find... it's my favorite card, period.

If any of you have a favorite card show pickup, you should head over to Tony's blog and enter his contest.  All you need to do is write up a post and leave him a link.

Happy Monday and sayonara!
Posted by Fuji at 3:00 PM 7 comments:

Bubble Gum and a Nice Piece of Aase

Ronald Reagan was in the White House and Topps gave kids something new to collect: Garbage Pail Kids.

Back to the Future was the highest grossing film.

The Nintendo Entertainment System made its way to North America.


Michael Jackson and Lionel Richie wrote the hit single We Are The World to raise money for humanitarian aid in Africa and the United States.

And I was a middle school student rocking out to that song on my Sony Walkman while sorting stacks of baseball cards that most certainly included 1985 Topps: 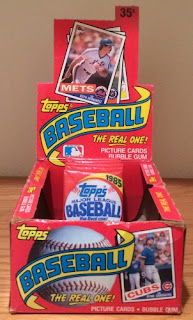 And this afternoon... I ripped open those packs and scanned the highlights. 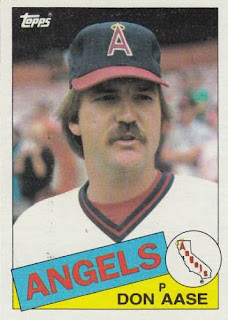 Grabbed this Aase out of the first pack I opened.  Definitely off to a strong start.

Not a fan of the San Francisco Giants, but I've got to admit... I enjoy listening to Kruk and Kuip on the radio. 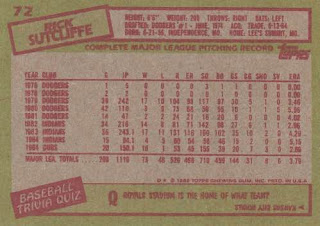 Let's hope that Trebek never used this question on Jeopardy.  C'mon Topps.  Even a monkey could answer that question. 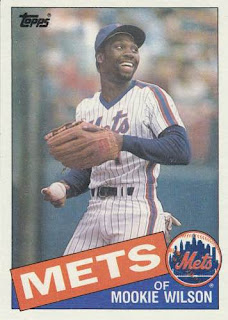 His stiffest competition was Barbaro.  Bottom line.  If I had a son... I'd name him Mookie before I'd call him Barbaro. 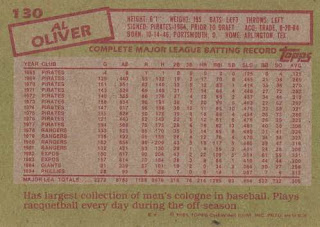 Most Interesting Card Back Fact

If any of you run into Mr. Oliver, can you please ask him about his cologne collection? 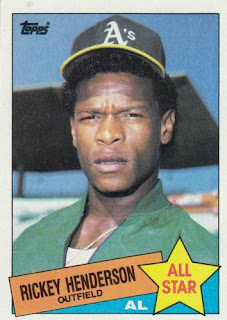 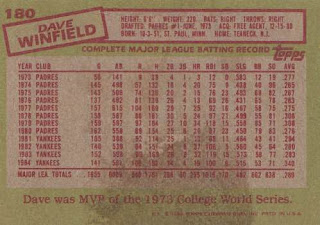 Winfield was the only non-subset hall of famer I pulled... and he happened to have the nastiest wax stain.  Talk about bad luck. 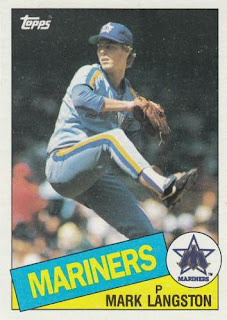 
This card was pretty hot back in 1985.  Langston was coming off a rookie year in which he led the American League in strikeouts.  He was also runner-up to his teammate Alvin Davis in the AL ROY voting.

Three of the packs contained cracked gum.  The fourth piece of gum was discolored.  But this piece was pristine.  Four sharp corners.  Nice edges.  Great color.  My guess is it would fetch a PSA 10 grade.

If we were using these two cards to predict the outcome of tonight's ALCS game... I'd have to give the edge to Kansas City.  Comparing the two guys, Wilson beats out Upshaw in almost every statistical category.  And as I write this... the Royals happen to be leading 2-1 in the fifth inning.

I'm off to watch the rest of the game in hopes that Toronto will bounce back and possibly take it to a Game 7.

Happy Friday and sayonara!
Posted by Fuji at 7:00 PM 12 comments:

Sometimes The Stars Are Aligned

Another post inspired by a YouTube video.  This time it's a cover of Gotye's Somebody That I Used To Know:


Five people playing one guitar simultaneously.  Insane, right?  I really enjoy watching and listening to people cover different songs, but this video (actually... it was this video) totally blew me away.

A lot of YouTubers have amazing voices.  Others are super talented musicians.  These guys combined the two and added a twist, which (of course) made me start thinking about out of the ordinary athletes.

The first person that came to mind was Pat Venditte of the Oakland Athletics:

There's no shortage of switch hitters in baseball.  Heck... I've even hit from both sides of the plate in the same game before.  But switch pitchers?  They're definitely unique.

How unique?  In the last century, only Venditte and Greg Harris have thrown with both hands in a single MLB game. 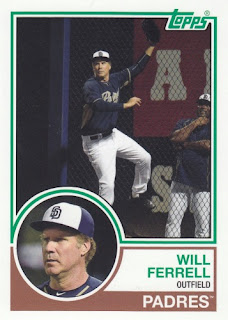 Another bizarre occurrence took place earlier in the year when Will Ferrell played all nine positions for ten different teams over the course of one day.  That probably won't be happening again in the near future.  But Mr. Ferrell didn't accomplish his feat in an official MLB game. 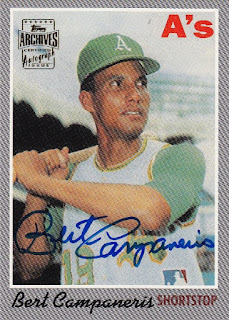 However... Bert Campaneris did it fifty years ago.  That night he became the first MLB player to play all nine positions in a single game.  You've gotta be pretty well-rounded to pull that off.  Since then only three other MLB players have accomplished that feat in a MLB game. 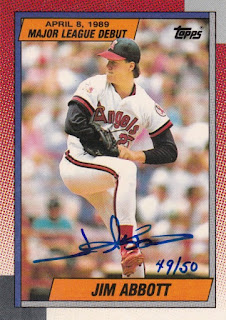 I'll wrap this post up with a guy who was born without his right hand, yet managed to defy the odds and pitch in the MLB.

Jim Abbott's story has been well publicized and rightfully so... which drove cards collectors to flock to his cardboard in the early 90's.  Unfortunately... these days most of his cards can be found in dime boxes, but his admirers know his accomplishments are much more valuable than his rookie cards.

Many people dream of one day pitching in the major leagues... but only a small percentage of very talent athletes accomplish that feat.  Abbott did it with one hand... and he even managed to pitch a no-hitter against the loaded lineup of the Cleveland Indians back in 1993.

And just in case you're wondering... he also managed to hit two singles during his MLB career:


No doubt about it... Abbott was special.  Heck all of these guys were in their own unique way.

Who are some of your favorite unique athletes?  What makes them so special?

Flea Market Finds #96: Stickers, a Bobble, and some old Pepsi

It's been a few weeks since I walked around the flea market, so I woke up early yesterday and met my buddy at the Capitol Flea Market.  When I arrived on the scene, we were greeted by the longest line in the history of this flea market... 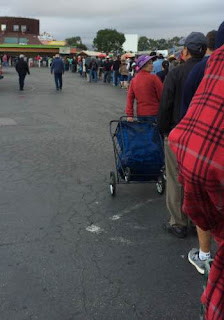 The weather was perfect... overcast and cool... so my buddy and I decided to wait it out.  After fifteen minutes or so, we finally made it inside and were ready to track down some hidden treasures. 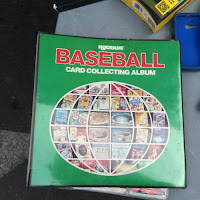 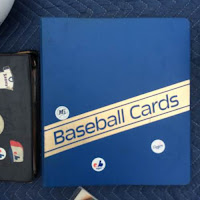 I picked up a few items for myself, but before I get to them... I figured I'd show off a pair of baseball card binders I saw.  They were both laying around waiting for either The Shlabotnik Report or Night Owl Cards to buy them. 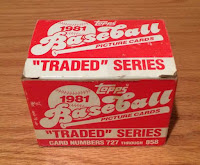 Remember what they say... don't judge a book by its cover.  This might look like a 1981 Topps Traded set, but it actually contained over 100 Fleer baseball stickers:

I never really valued these back in the 80's and 90's... but in the past few years, I've really enjoyed picking them up when the price is right.  One dollar seemed fair to me. 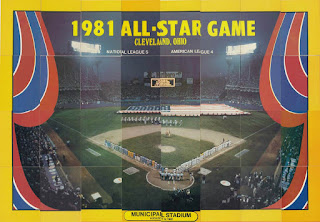 I'm missing a handful of stickers for this set, but at least I was able to build the puzzle.

I'm slowly building up my bobblehead shelf in my office... thanks to people dumping theirs at the flea market.  I've decided that I'm willing to spend up to $5 for hall of famers, $3 for stars, and I'll buy almost any other bobble for a dollar.

The lady who sold me this bobble must have read my mind, because three bucks was the most I was going to pay for this bobble.

Normally I wouldn't buy twenty-two year old soda, but these bottles commemorate the San Jose Sharks first season at the San Jose Arena.  I've wanted to add one of these bottles to my Sharks shelf in my office.  I'll take the other one to my classroom.  The other two?  I gave them away to my buddy.

Sometimes there are vendors who arrive or set up later, so when were were finished, we went back and retraced our steps.  There weren't too many new vendors, but one of them had these stacks of baseball cards... 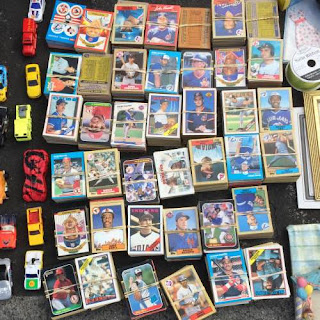 Gotta love baseball cards held together by rubber bands.  Nobody was around, so I couldn't ask for a price.  Oh well... I can't really use damaged baseball cards from the Junk Wax Era.  That's it for today.

Happy Monday and sayonara!
Posted by Fuji at 3:00 PM 6 comments: