A Game of Numbers

I've had this weekend circled on the calendar for a few months.  One of my closest friends is visiting and there are lots of things on the agenda.  The problem is she's only here for two days.

That being said... today's post will be short and sweet.  Johnny recently hosted his annual BFG (Big Fun Game) over on his blog:  Johnny's Trading Spot.  For those of you who aren't familiar, the rules of the game are similar to a white elephant gift exchange or Yankee Swap.

One of my favorite things about baseball (and sports in general) is analyzing statistics, which is probably why I fell in love with collecting cards.  My childhood bookshelves were filled with American League Red, National League Green Books, which listed just about every possible baseball statistic baseball fans could imagine. 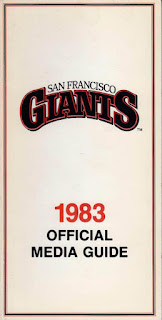 Media guides are essentially the same thing... only they focus on specific teams.  I've collected a fair share of these over the years, including the Oakland A's and San Francisco Giants ones Johnny sent me.

The other three are brand new to my collection...

All three of these media guides have excellent covers that actually feature baseball players.  I'm looking forward to sitting down and flipping through all three of these after my friend leaves.


Anyone of you collect media guides?

Thank you Johnny for another generous Big Fun Game!

Assuming this post is published on schedule... I should be getting seated at my favorite restaurant:  Flemming's Prime Steakhouse and Wine Bar.

Happy Saturday and sayonara!
Posted by Fuji at 5:00 PM 12 comments:

"It is our choices, Harry, that show what we truly are, far more than our abilities."
-Albus Dumbledore

That's one of my favorite movie quotes of all-time... and it's one I wholeheartedly believe in and try to live by.  It's especially meaningful, because they're words I can picture coming out of my father's mouth.

He isn't perfect, but I sincerely believe that he's tried his best to be a positive role model for his children and siblings.  As far back as I can remember, he's instilled values such as honesty, responsibility, compassion, and respect for others.

The man has always been my hero and someone I've admired.

Even before he got involved with PED's, Barry was one of those players the media and fans either loved or hated.  Now that he's the single season and career home run leader those feelings have only been amplified.

I can't help but remember seeing him step into the batter's box and watching the level of energy soar throughout the stadium.  Like guys like Clayton Kershaw and Jose Altuve... I couldn't help but cheer for him even though he played on a rival team.

Over the years, I've picked up his cards here and there if they were too good to pass up.  Then about a year or two ago, I decided to pursue his cards a little more aggressively.

Today I figured I'd show off some of the key cards in my relatively small Barry Bonds PC.  Let's kick things off with my collection of autographs:

As of right now, all of my autographs were produced in the late 90's or early 2000's.  I'd like to eventually expand to newer Topps autographs, but so far none of them have fallen into a price range I'm comfortable with.

The 2001 Topps Gallery was the first autographed Bonds card I ever purchased and one of the more expensive.  It's also one of my favorites. 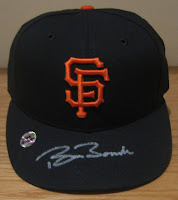 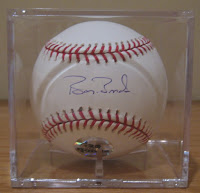 Back in 2001, Fleer released a product called Fleer Legacy.  Each box contained one autographed hat.  I've picked up a few of these over the years and Bonds was one of them.

The signed baseball was purchased at a card show off of a friend for $55... which still seems like it's a pretty good price.

Next up are a handful of memorabilia cards I've picked up over the years:

I don't really go out of my way to look for memorabilia cards, but if I stumble across one at a card show or on COMC for $3 or less, I'll grab it.

Moving along... here are the rookie cards I've managed to add:

I'm still missing his 1986 Fleer Update and Sportflics Rookies cards.  I'm not 100% sure, but I think I have both of these cards sitting in factory sets somewhere in my collection.

Last year, I purchased a few of his 1987 O-Pee-Chee rookies.  Unfortunately, I seem to have misplaced them.  One of these days I'll stumble across them and add a scan to this post.

Until then... here are graded copies of his 1987 Topps and Topps Tiffany cards:

I've said it before... and I'll say it again.  This is one of my favorite baseball cards of the 80's.  It features a solid card design and a well cropped, action shot of Mr. Bonds.

I'll go ahead and wrap up my collection with these three San Jose Mercury News printing plates I discovered at a local flea market: 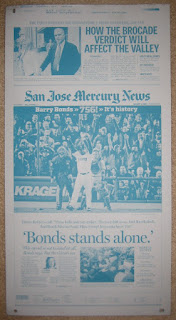 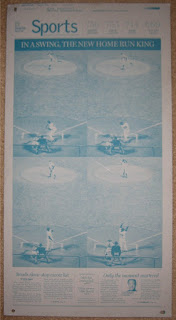 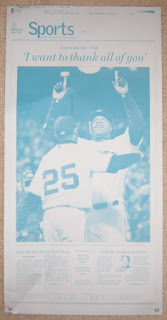 All three plates are from 8/8/07... the day after he launched his 756th home run to pass Hank Aaron on the all-time home run list.  They aren't very practical and they're a pain in the butt to store... but I've gotta admit... I'm glad they're sitting in my collection.


Do you go against the grain and collect any unpopular players?
If so, who?

Until next time... happy Thursday and sayonara!
Posted by Fuji at 3:00 PM 18 comments:

Flea Market Finds #131: Cards, Concert Tickets, Comics, and a Can

As the temperatures continue to rise here in California... the flea market hot streak continues as well.

Two Saturdays ago was the monthly Branham High School flea market.  It's by far the smallest flea market around, but it usually produces at least one or two purchases due to a high percentage of sports memorabilia dealers.

In fact, the first dealer I walked up to had cards...

This card was the centerpiece of this twenty dollar purchase.  I'm one of those collectors who still values memorabilia cards... especially when they depict two legends like Bench and Munson.  Unfortunately I didn't realize that this card had a slight crease (near Bench's jersey number) until I came home.

The other three cards are nice add-ons.  I've been looking for the 2009 Goodwin Gwynn relic for awhile now, while you can never have enough autographs of Goose and Pena.

My buddy Tony opened up a couple of boxes of 2018 Prizm World Cup, so I put together a partial team set and offered him a buck.  I'm missing card #125 Eiji Kawashima, which I hope to pick up eventually. 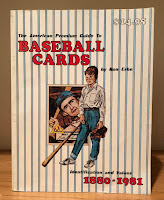 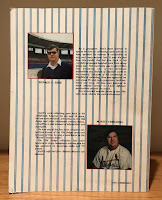 I had never seen this book before, but apparently there are plenty of copies floating around out there.  At the time, five bucks felt like a steal for a price guide that predates Beckett Baseball Magazine.  However after some research, I discovered it's pretty much the going rate.

Oh well... I'd rather have this book over two packs of 2018 Topps Series Two any day of the week. 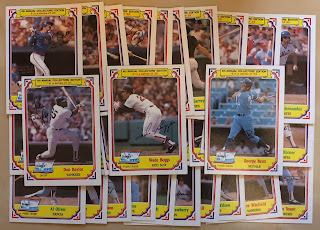 Apparently I missed out on buying vintage hall of famers by about 30 minutes.  This guy was cleaning out his childhood collection and he had 60's and 70's Topps hall of famers in poor condition for very good prices.

By the time I arrived, the 1984 Drake's set was the only thing I was really interested in.  I was pleased to see that it contained this hidden treasure: 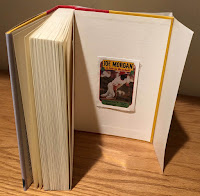 There's a guy who sets up at Branham with tons of crates filled with LP's.  I didn't find any records to purchase, but he did have this Joe Morgan book.  Normally I probably wouldn't have bothered picking it up, but I noticed that it came with a special collector's edition baseball card:

The card alone was worth a buck to me.

In addition to the Joe Morgan book, the gentleman had a few 1977 RC Cola cans.  At a buck each, I was tempted to buy all of them.  However storage space is limited, so I just grabbed the Seaver. For being 41 years old, it's in surprisingly good condition.

I wasn't a very big Masters of the Universe fan when I was a kid, but the price was right so I grabbed the pair.  In regards to value, this was probably the best deal of the day. 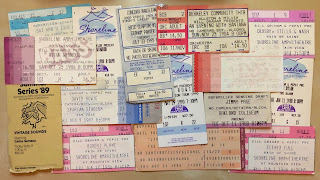 This is one of those deals that seemed like too good of a deal to pass up.  There are a lot of cool artists ranging from Santana to Aerosmith.  There's approximately 25 different tickets, plus a bunch of duplicates.  I figure I'll try to flip a few and recover some of my expenses.

Well that's my latest round of flea market purchases.  I walked around the Capitol Flea Market this past Sunday and went home empty handed, so I guess the flea market hot streak has officially ended.  Let's hope Mother Nature's heat wave will end as well.