My Kind of Cardboard... I Mean Comic... I Mean Booklet.

Before I get into today's post... I think you should be equipped with some background information on me.  Here's five (not so) random facts about me:

#4 - I've been an Oakland Athletics fan for over thirty-five years.

#5 - One of my favorite things to collect are oddball issues.

In short, I love cheap, vintage, oddball issues of Oakland Athletics... especially when they involve comics.  That's why I was pretty excited to find this 1970 Topps Reggie Jackson Booklet sitting in a box of cards under my desk last month. 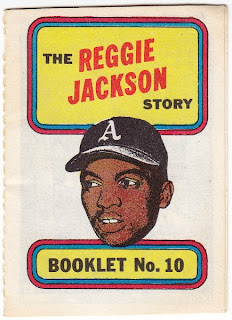 If you're not familiar with these, they were inserted into Topps and O-Pee-Chee baseball card packs.  Each booklet featured a cover with the booklet number, six pages of comics, and a checklist. 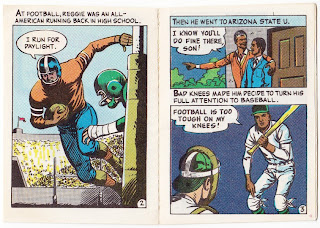 Each comic is a brief biography of the featured athlete.  I'm sure glad that Reggie decided to focus on baseball, instead of football. 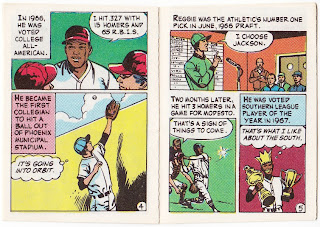 I'm even happier that the New York Mets selected Steve Chilcott with the first overall pick in the 1966 MLB Draft. 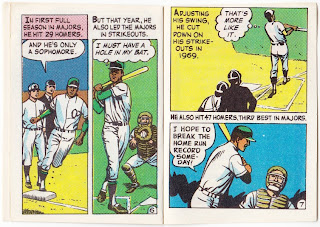 In hindsight, we now know that Reggie never broke the home run record.  But he did have a solid career in which he pounded 563 round trippers (13th most in MLB history), made the all-star team fourteen times, was the 1973 AL MVP, and was the recipient of two World Series MVP Awards.

But if you're not a big Reggie fan, there are twenty-three other players (one from each MLB team) in the set... including several hall of famers and a booklet of the All-Time Hit King.

It still surprises me that you can find complete sets of these on eBay for under $25... especially when you consider that they're over forty years old.


What are some of your favorite, affordable oddball sets?

I recently drove down to my local card shop to pick up some supplies and discovered this... 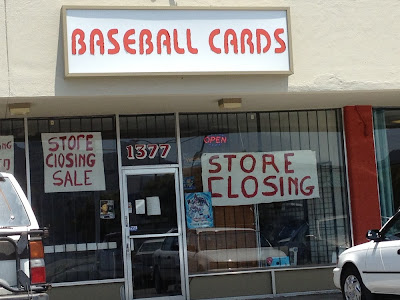 In a few days, I'll have one less card shop in my area (insert sad face).  All-American Sports has been providing Bay Area collectors with sports cards, autographs, and supplies since the early 90's.

It's actually not a huge surprise.  I've been friends with the owner for over two decades and he's been talking about this for awhile now.  As expected... it boils down to money.

Once upon a time, customers flowed through his door to fulfill their hobby needs.  But in the past five years, I have never seen more than three customers in there at one time.  With wax boxes, singles, sets, supplies, and memorabilia at your fingertips... the internet and the fact that we're no longer in the Junk Wax Era have driven this card shop out of business.

Sadly, I must accept some of the blame.  I rarely visit my local card shops.  And when I do... it's usually to buy supplies.  Most of the singles I purchase are off of eBay, COMC, and Sportlots.  And the rest are acquired at card shows and flea markets.

Knowing that this might have been the last time I walk through this shop's door, I decided to purchase more than a storage box.

All-American Sports Cards once held numerous autograph signings to attract fans and customers.  The shop is lined with autographed photos and memorabilia.  Since he doesn't want to take them with him, he's clearing things out at highly discounted prices.

First up is this autographed postcard honoring the 1989 San Francisco Giants: 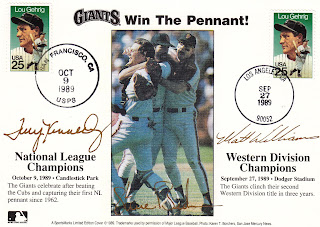 It's autographed by Terry Kennedy, Matt Williams, and Steve Bedrosian.

Next up is this 8x10 photo signed by Joe Rudi for my Oakland A's PC: 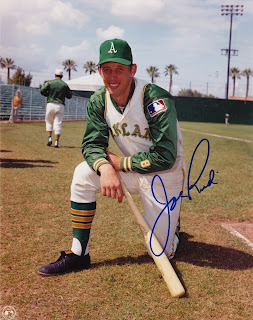 Rudi hit a home run on the day I was born to help the A's beat the Detroit Tigers. 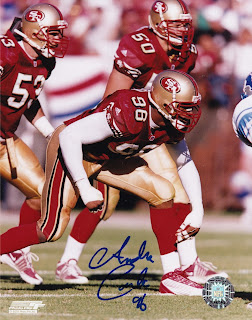 Carter and I share the same high school... although I attended several years before him.

And finally... a pair of San Jose Sharks: 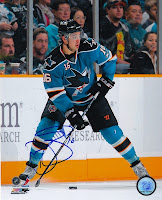 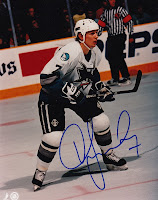 Devin Setoguchi (left) is my all-time favorite Shark, while Igor Larionov was one of the members of the famous KLM Line, which also featured Sergei Makarov (another former Shark) and Vladimir Krutov.

None of these autographs are worth a lot of money, but sentimentally they all have a place in my collection.

Sayonara All-American Sports Cards!  You guys had a solid run and will be missed.


Do you support your local card shops?  Where do you buy the majority of your sports cards, supplies, and memorabilia?

Happy Sunday and sayonara!
Posted by Fuji at 3:00 PM 18 comments:

I don't remember the exact date... but at some point I discovered that Carlton was a "lefty" like myself.  And from that moment on, he became one of my favorite players.

Earlier this month, Steiner Sports had one of their "3 Autographed 8x10's for $99.99" deals. So I jumped on the opportunity to grab this: 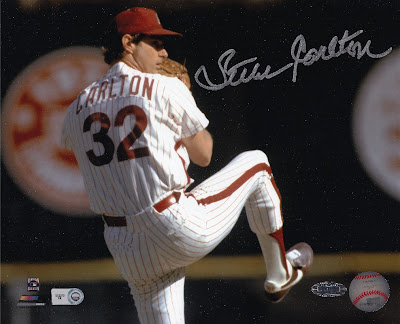 I've been wanting to buy one of their Steve Carlton autographed balls, but they never fall into my price range.  I'm sure you're probably wondering... what's your fascination with Steiner?

As we all know... unless we witness the piece getting autographed ourselves, we can never truly know if an autograph is real.  Which is why it boils down to obtaining autographs from people we "trust". 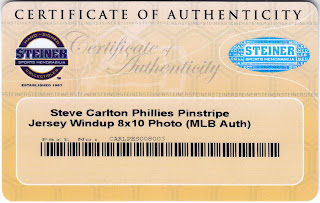 Steiner has always had a solid reputation among autograph collectors.  Sure there are some "bait and switch" issues, where the holograms are removed from authentic signatures and placed on items with fake signatures.  But I've never heard of any issues with products purchased from Steiner themselves.

That's why I don't have a problem paying a few extra dollars for autographs certified by Steiner, UDA, Panini, and MLB Authentication who secure the majority of their autographs in-person.

As for third party autograph authenticators like PSA/DNA, JSA, and GAI... I'm cautious.  There's plenty of documentation on the internet about all three companies certifying bogus autographs.

I own several autographed photos certified by PSA/DNA, but I'll usually only purchase low end stuff with their COA's.  And I'll typically avoid JSA, GAI, and other companies' certified items.

Does that mean that I think they're fake?  Not necessarily.  It just has to do with my personal level of trust I place on those two companies.


What are your thoughts on collecting autographs you haven't obtained in person?

Happy Friday and sayonara!
Posted by Fuji at 3:00 PM 9 comments:

Last month, I entered a contest over at The Card Hobbyist and ended up winning this incredible package stuffed full of cardboard: 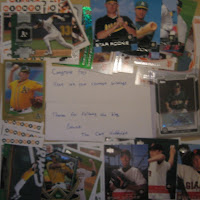 It's way too much to scan, so I'll show off a few of my favorites.  Let's kick things off with this sweet insert showing Josh Reddick in action:

There's also this new addition to my Rickey Henderson PC:

And of course this very shiny Yoenis Cespedes...

And of course... my favorite former Athletic on one of my favorite set designs in the past few years...

Last, but not least... here's another autograph for my Oakland A's collection. 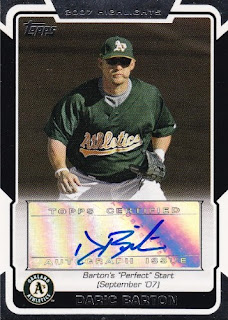 A huge thank you goes to The Card Hobbyist.  I encourage all of you to head over there and check out his blog.  He offers a monthly contest and shows off his pack breaks on a regular basis.  So, what are you waiting for?  Head over there now!

Happy Friday and sayonara!
Posted by Fuji at 9:00 AM 1 comment:

There are hundreds of reasons why collecting sports cards is cool.  One of them is that they capture sporting events on cardboard.

Today marks the 30th Anniversary of the infamous Pine Tar Incident involving George Brett and the New York Yankees.  If you're too young to know what I'm talking about... just check out the video for yourself.

Fleer decided to honor the event by creating a special card in their 1984 baseball card set. 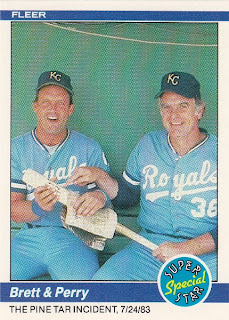 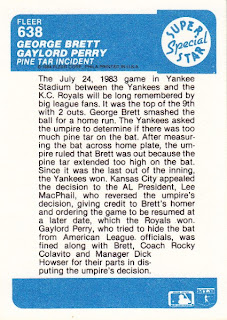 You've gotta love Fleer's effort to immortalize the event... as well as Brett and Gaylord Perry for their willingness to pose for the photo.  In the end, both were happy because the umpire's ruling was eventually overturned, the home run was allowed, and a few weeks later the game resumed with the Royals holding off the Yankees.

On a side note... when the two teams got together again to wrap things up... Billy Martin had a little fun with the fielding arrangements.  He let the left-handed Don Mattingly play second base and pitcher Ron Guidry play centerfield.  It would have been cool had Fleer captured that on cardboard.

July has definitely been a slow month for me out at the flea market... which is probably a blessing in disguise, since my 2013 Archives Fan Favorite Autograph Set has been a constant drain on my cardboard budget.

But I haven't been completely shutout.  Two weekends ago, I picked up an "almost new" Sega Genesis for $5: 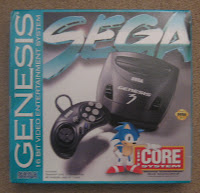 And on Sunday, I added this beautiful 1970 Topps Willie Mays to my "Cards with Character" collection for a dollar.  The guy didn't even charge me extra for the artwork.

Happy Tuesday and sayonara!
Posted by Fuji at 3:00 PM 9 comments: