Hands Down... The Best

For the past two decades, autographs have been one of my favorite things to collect.  It started with products like Be A Player and Signature Rookies, but within a few years I was chasing down any certified pack pulled autograph I could get my hands on.

These days, I've had to scale things down a bit.  I try to focus on specific players and teams, while avoiding "sticker" signatures as much as possible.  Over the past few years, I've added signatures of guys like Hank Aaron, Sandy Koufax, Ted Williams, and Willie Mays to my collection.  All four of these old timers have beautiful signatures, but none of them are in the same league as the newest member of my autograph collection: 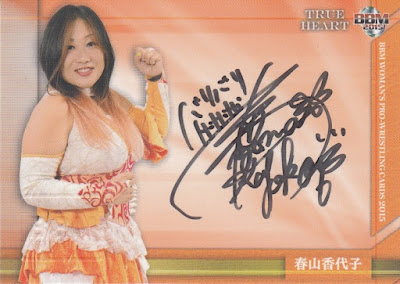 Have you ever seen such a beautiful signature?  It's hands down the coolest, most awesome autograph in my collection.

Before last night I had no idea who the woman was, but thanks to the internet and The Raz Card Blog, I was able to dig up some information on the signer.  Her name is Kayoko Haruyama and up until a month ago, she was a professional Japanese wrestler.  On December 27th, she wrestled her final two matches and wrapped up an eighteen year career.  During that time she won multiple individual and tag-team championships and according to Wikipedia was a very accomplished wrestler.

This certified on-card autograph is from 2015 BBM True Heart and was sent by Raz last week.  He also sent me the rest of the cards that I needed for my 2014 BBM True Heart set (which by the way was part of a previous Raz care package): 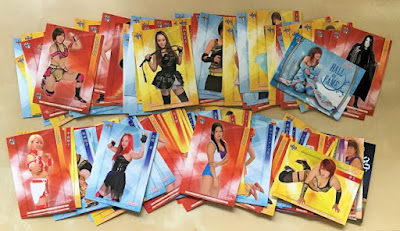 If you're interested in learning more about these cards, I encourage you to head over to The Raz Card Blog.  He has several posts featuring these lovely ladies of wrestling.

Thank you so much Christopher for this awesome care package!  I'll head over to COMC right away and start shopping for your care package items.

Happy Sunday and sayonara!
Posted by Fuji at 9:00 PM 5 comments:

My Office vs. Godzilla

My office is trashed.

I've got stacks of cards all over the place.  Packages from Amazon, eBay, subscription boxes, and other online orders are piling up.  And my trash can is overflowing. 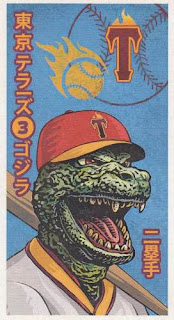 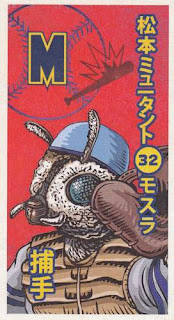 It seriously looks like Godzilla and Mothra waged war against each other.  But now that I'm getting back to normal health wise and there aren't any card shows to attend... I can finally spend a day in my office organizing and cleaning. 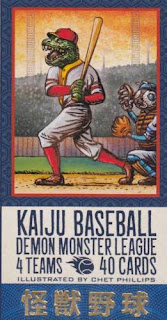 But before I get to that, I wanted to share a unique oddball set I picked up off of Etsy last summer.  The illustrator emailed me and I was immediately intrigued. 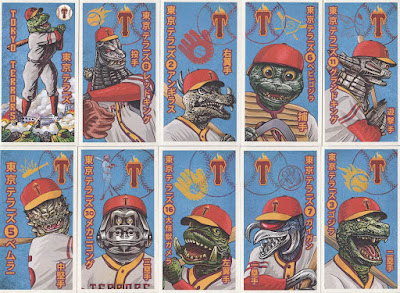 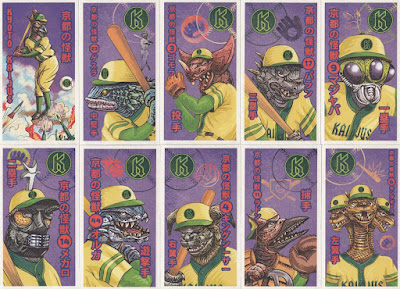 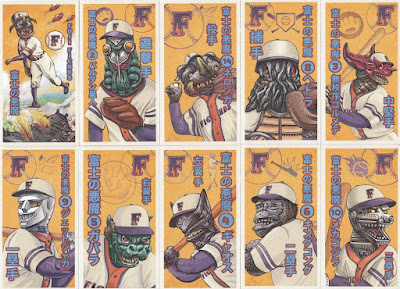 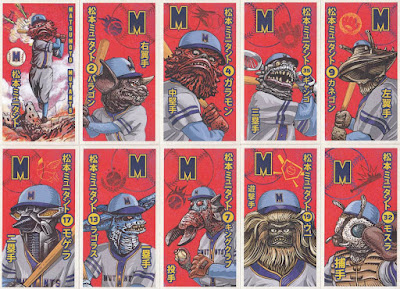 There are a total of four teams:  Tokyo Terrors, Kyoto Kaijus, Fuji Fiends, and Matsumoto Mutants.  Each team consists of nine player cards and one team card.  The cards feature beautiful illustrations, have a vintage feel to them, and are essentially what I was drawn to.

On the back you can find cool nicknames and baseball stats for each monster.  Godzilla is nicknamed The Sultan of Smash and rightfully so, because he easily has the best statistics in the set.  There also seems to be a mini game of Rock, Paper, Scissors embedded into the card backs as well.


At the end of the day... after the dust settled and the kaiju were put back into their box... I was very pleased with this set.  It set me back $14 (+ $2.75 shipping), which breaks down to around 42¢ per card.  That's a little more than what I typically spend at card shows, but they're not your everyday common from the Junk Wax Era, so I understand his price point.

I realize that these cards aren't for everyone.  However if you're a fan of Godzilla and his peeps, then you might appreciate them.  Well... enough stalling... I'm off to go clean my office.

Happy Saturday and sayonara!
Posted by Fuji at 9:00 AM 16 comments:

Last Saturday, when I got home from the Serramonte Mall Sports Card, Toys, and Collectibles Show... I came to the realization that I have a serious problem.  I'm unable to walk away from a bargain.

Two weeks ago, I picked up tons of cheap inserts, parallels, rookies, and base cards for my binders at the Sacramento card show.  So my game plan was to stick to quality over quantity this time around. 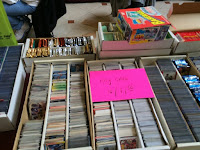 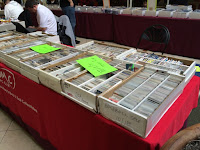 Purchase #1:  A Monster Box Filled with Packs and Singles $58

As soon as I entered the mall, I immediately discovered the COMC guy who had tons of monster boxes filled with cards and wax packs for 10¢ each.  I spent over two hours sifting through his stuff and when I was finished, I had pulled 252 packs, 454 cards, and one box of 1989 Topps Stickers: 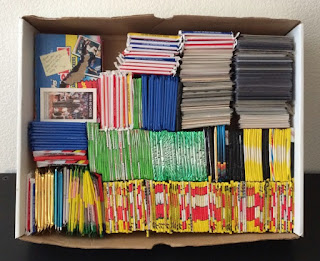 The packs ranged from a boatload of 80's Fleer Star Stickers to a small handful of Flintstones trading cards. 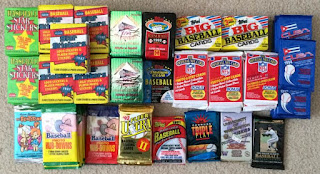 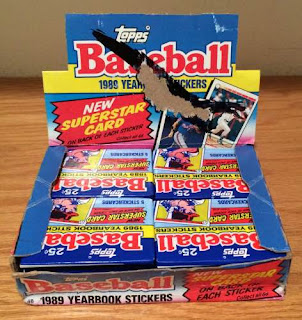 Now I just need to find myself an empty yearbook to stick them in.

I have no idea where to begin with the cards.  His boxes were filled with a little bit of everything, but I mainly targeted rookie cards, oddballs, vintage, 90's inserts, and 80's base cards of baseball hall of famers.

After sifting and sorting... I discovered that most of the cards I picked up were actually cards I already own, but that's okay.  All of my duplicates will go into care packages. 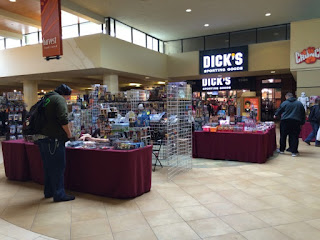 After killing two hours at the dime boxes, I made a trip to my car to lessen the load.  I went back into the mall and began making my rounds.  I ran into Brady (St. Louis Cardinals' Cardboard) and Mr. Haverkamp (cardboard blog supporter) who are regulars to this show.  Mr. H brought some 1956 Topps hall of famers to check out.  Unfortunately I had spent most of my budget by then.  Plus I wanted to make sure both of us did our homework before spending the big bucks.

Brady hooked me up with a fat stack of Montreal Expos, San Diego Padres, Oakland Athletics, and Japanese baseball players. 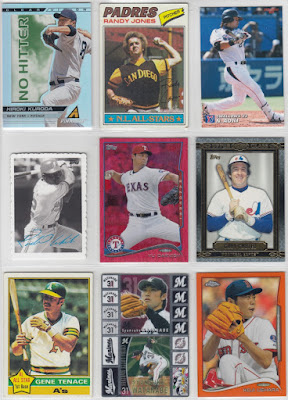 They ranged for oddballs I've never seen to sweet looking die-cut acetate cards that are super shiny.  Thanks Brady!  I really appreciate everything you gave me.  Hopefully there are a few St. Louis Cardinals that you can use in my package. 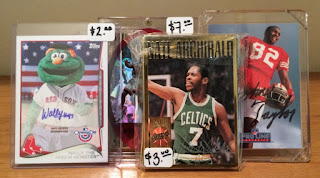 This might be one of my coolest card show purchases in recent years in terms of overall value.  While walking around the show, I passed up several cards I was interested in.  Then I stumbled across a guy with a bunch of toys and a small section of cards.

I was immediately drawn to this: 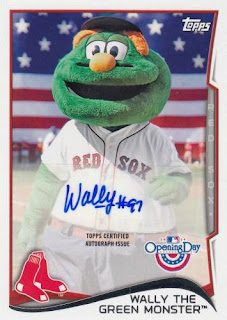 He also had a team bag laying on his table filled with 1995 Action Packed Hall of Fame autographs: 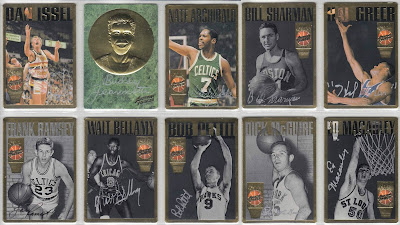 I haven't been passionate about basketball for a few years, but certified hall of fame autographs for 30¢ each is just way too good of a deal to pass up.

After putting the mascot autograph and basketball autographs into a stack, the vendor came up and told me everything was half off the marked price.  Normally I wouldn't have spent $7 on this gold SPx parallel of Michael, but it's worth $3.50. 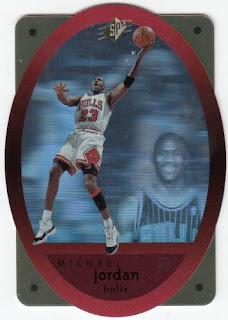 The last card I grabbed was an on-card autograph of John Taylor: 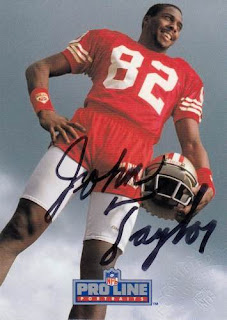 Taylor played his entire career with the San Francisco 49ers and I grew up watching him week in and week out during football season.  He might not be the biggest name, but he's worth a buck.

To be honest, I would have been okay paying the full price of $14 for these thirteen cards.  The fact that it was half off definitely makes it one of my most memorable bargain bin finds.

This card show officially put me in the red in terms of my cardboard budget.  The good news is I just cashed in on my eBay credit card rewards and they're sending me three $100 gift cards.  I really need to restrain myself from spending it all in one month.  Ideally... I'll treat myself to one special card each month.  Or maybe... I'll use the money for something out side of sports memorabilia.  Yeah right.  Who am I kidding?

Happy Wednesday and sayonara!
Posted by Fuji at 3:00 PM 24 comments:

When it comes to care packages, I'll try my best to return the favor and at the end of the day... a blind trade has been made.

I actually prefer blind trades these days, because I send out stuff that fits the other collector's PC's and hopefully they'll be able to use at least some of the stuff.  If not, they're free to pass it on to their friends or other collectors who share their interests.

Daniel Wilson over at It's like having my own Card Shop recently requested my address and told me he wanted to send over some stuff for my collection.  So we exchanged addresses and within a few days I received a package from him.  If he was an eBay seller, I'd give him a five star rating for shipping.

Unfortunately I've been under the weather the past two weeks and didn't get around to opening it until today.  I wanted to kick things off with this rookie card of Manny Trillo: 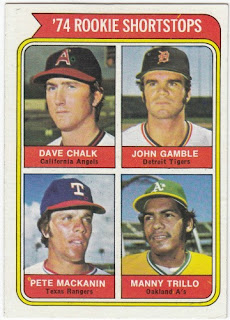 I remember Manny being an all-star for the Philadelphia Phillies and Chicago Cubs, but I had no idea that he played for my beloved Athletics.  In fact, he was part of the trade that brought Billy Williams to Oakland from Chicago in 1974.

You gotta love cards that motivate you to research and learn new things.  Stay tuned... there's more to come later in this post.

However... let's get to some nice memorabilia cards for my Oakland A's PC:

I know that memorabilia cards have taken a beating in terms of authenticity and value the past few years.  But I still enjoy collecting them and I still consider them a "hit".  Daniel went four for four on these, because I didn't have any of these.

He also sent a ton of cool inserts... but this 1999 Topps Gallery Gallery of Heroes insert of Ben Grieve takes the cake: 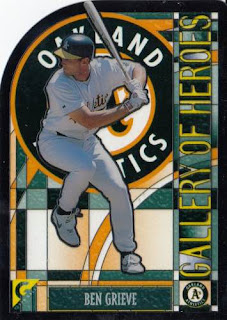 If you've never owned one of these inserts, I encourage you to look into them.  These die-cut pieces of acetate are nothing short of beautiful.

And the last two cards I'll share with you are these 2008 Stadium Club rookie cards of Daric Barton:

Daniel actually sent a handful of inserts and parallels I didn't have, but these two cards stood out.  First they reminded me that Topps actually produced Stadium Club back in 2008.  For some reason, whenever I think of this product line... I think of the early 90's and the past two years.  It also brought back fond memories of their First Day Issue parallels.  Throw in that they're borderless and show off crisp photography and we have another pair of winners.

However one thing left me scratching my head.  Why are there two cards of Daric Barton?  And why are they both numbered 102?

According to Beckett, players on cards numbered 101 to 150 were each given two cards: a regular and a photo variation.  The Barton on the left is the regular version, while the one on the right is the variation.

Thank you Daniel for the great cards and inspiring me to get off of my butt and do a little cardboard investigating.  I'll try to ship your package sometime this week... if not next weekend at the latest.

Happy Sunday and sayonara!
Posted by Fuji at 7:15 PM 8 comments: