One of my favorite holiday memories involved flipping through Sears and Service Merchandise catalogs and circling all of the toys I wanted.  These days I'm a little too old for toys.  Or am I?

1992 Topps #40
As I approach the big five-oh... I still enjoy the occasional Lego build.  This Christmas I received a few sets from my best friend, her niece, and her nephew.  Figured I show off one of the sets and tie it into some other plastic items that have recently entered my collection... along with a quick pack break for those readers who only care about cards.  Spoiler alert... the Ripken shown above (used to lure readers) was the best card I pulled.  But before we get to the packs, let's show off the plastic first.
Here's the Lego set I received and built on Christmas: 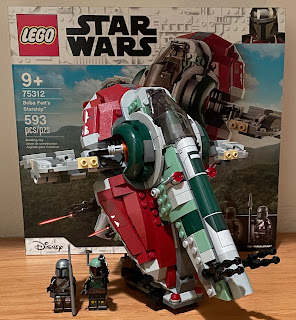 Lego 75312: Boba Fett's Starship
This is the third Slave I Lego set I've owned (also have Lego sets 75243 & 75060), but it's the first one I've taken the time to build.  Although it's too small to be considered minifigure scale, I think the Lego designers did an amazing job with this set.
The build itself went smoothly and provided a little over two hours of entertainment.  My only concern is the brick built stand that comes with this ship is pretty flimsy.  I hope it doesn't tip over and knock over some of my other Lego Star Wars ships.
As for the other two Lego sets I received... I haven't built them yet.  One of them I plan to take into my classroom.  I'll build and display it there, since I think some of my students will get a kick out of it.
Let's move along to some other plastic items I received recently...
First up are some new decorations for my team shelves in the office:

These trinkets were part of a much larger care package sent to me by my buddy Woody who I met on the card forums back in the day.  I'll share some of the other goodies in a future post, but for the time being... these mini-helmets and TeenyMates were more appropriate for today's post.
These remind me of items you'd find in those quarter machines at the grocery store back in the 80's and 90's.  Although these days, I'm sure they'd charge a buck or two for these novelties.
And rounding out the plastic items are these fantastic looking samurai models that Ryan (SumoMenkoMan) sent me last week: 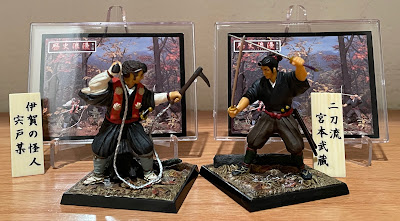 When I was growing up, my parents would go to this small grocery store in Japantown called Dobashi where they sold little model kits that would sometimes contain a piece of candy.  This appears to be the modern day version of those model kits. 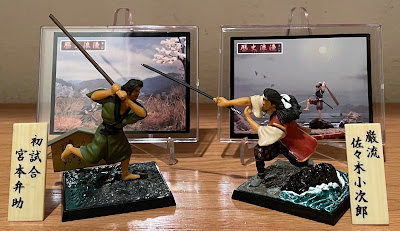 According to Ryan, he found them at the flea market and he generously sent me the duplicates from this purchase.  Each model came with a little sign and a trading card.
Dobashi closed their doors back in 2006, but the next time I go to Nijiya (another Japanese grocery store) I will definitely see if they have anything like these plastic samurai warriors.
Thank you Woody and Ryan for these cool display pieces that have already been added to my office.
And rounding out the post are six packs of baseball cards for all of the card collectors out there.
The first one was included in the box from Ryan with the samurai figurines.  It's a 2021 Leaf Holiday Bonus Pack: 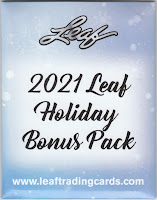 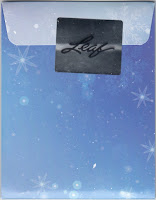 I'm not sure how these were distributed this year, but in the past Leaf would offer collectors these packs as a bonus when they purchased Leaf products.  According to Blowout, each pack is guaranteed to contain either an autograph, a relic, or a printing plate.
Here's what I pulled: 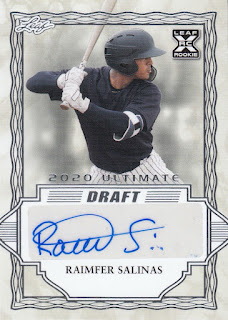 2020 Leaf Ultimate Draft #BA-RS2
It's an autograph of Raimfer Salinas, who appears to be a prospect in the New York Yankees organization.  I'm not familiar with him, but maybe Kenny can give us a prospect report in the comment section.

The final five packs are Junk Wax Era packs that I picked up back in November when I purchased a small collection from my buddy.  He originally purchased this collection from a guy at a card show, pulled out the nice cards he wanted, and sold me the leftovers.
One of these days, I'll sift through the box and pull out some of the more interesting "stuff".  Until then, here are the five packs I chose to open:

Out of all of them, the Fisk and Ripken are the two I'm happiest about.  They'll be going towards a project that I will eventually reveal.
Until then... happy Monday and sayonara!
Posted by Fuji at 3:00 PM 16 comments:

The COOLEST Advent Calendar Ever! 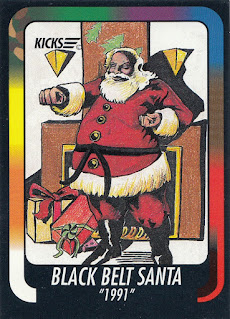 Our hobby community is pretty darn special.  All you have to do is read a few blog posts or watch some YouTube videos to witness just how remarkably generous collectors are to each other.  I find it even more fascinating that we often sent these care packages to each other knowing there's a good chance we'll never even meet the recipient in person.
But every now and then, I'll have the pleasure of meeting a fellow blogger in person.  One of these guys is Ryan (a.k.a. SumoMenkoMan) over at Japanese Sumo Wrestling Cards and Menko.  We haven't hung out in person since the start of COVID, but that will hopefully change sooner than later.  In the meantime, we keep in touch through text messages.

A few weeks ago, he let me know about a box he was sending my way and explained that this care package was a little different.  There were twenty-five mini packages inside designed to be opened one per day during the first twenty-five days in December.  In other words... a sports card advent calendar.  How cool is that?
Unfortunately... the first few weeks of December were crazy busy and I didn't get around to opening the box up until a few days ago.  Without spoiling the surprise, let's just say I was blown away by the generosity and creativity of this care package.
Let's kick things off with the note that was sitting on top... 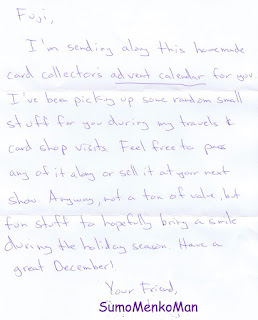 In the digital age we live in... I truly treasure hand written notes like this one.
Now let's start tearing into those PWE's.  Since it's probably hard to see what he wrote on each of the envelopes, I summarized it...
Day #1: A Little Ho-Ho-Ho to Kick Off December 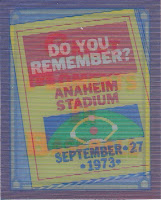 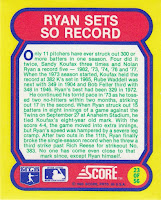 Twenty-six days after my 1st birthday, Nolan Ryan set the single season strikeout record which still stands today.
Day #3:  From One Fuji to Another 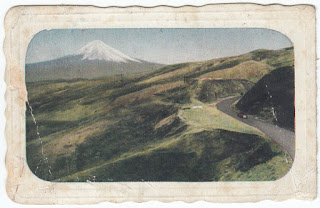 1988 Score #640
Score sure made Tony's little brother sound like a future star on the back of his rookie card.  Unfortunately anyone who hoarded copies of this card won't be getting rich off his career anytime soon.
Day #5:  Ultra Pro Goodie... Protect Your Cards 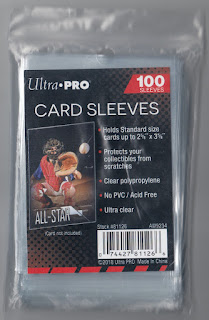 2021 Leaf National VIP #VIP1
Pretty sure your future is bright if you're a YouTube sensation named Blaze, you're 19 years old, and you already have a trading card.
Day #7:  We Gotta Get You to Chicago...

2021 Leaf National VIP #VIP2
Blaze might have a cooler name, but I'm guessing Spencer has a brighter future.
Day #8:  Time to Read & Relax 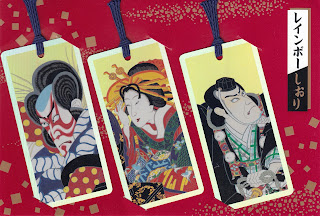 These are probably the coolest looking bookmarks I've ever seen.  It's hard to tell from the scans, but these colorful bookmarks depicting kabuki actors are printed on "refractorish" paper stock.
Day #9:  Rare Air & Big Cards

1990 Donruss Learning Series #7
I vaguely remember seeing one of these Learning Series cards on someone's blog.  I'm very happy to add this to the Rickey binder.  This acquisition has also opened my eyes to a Tony Gwynn card missing from my collection.
Day #11:  He's Always Watching...

1991 Kicks #98
The early 90's were the heart of the Junk Wax Era... but it can also be considered the Smorgasbord Era because there was a trading card set made for just about any topic you could think of.

This card was part of a karate set... and it's super unique.  I've never seen this card before, because if I had... I would have remembered it.
Day #12:  Amazing... Enough Said.

2021 Panini The National Pack
This appears to be a VIP pack from the 2021 National.  Ryan wasn't sure what was inside, so here are the contents: 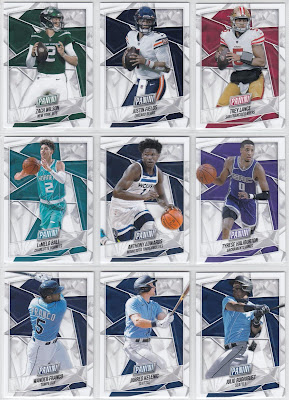 I love show exclusive stuff and can appreciate multi-sport checklists.  It'll be interesting to see which of these athletes eventually become superstars.
Day #14:  Just Because... 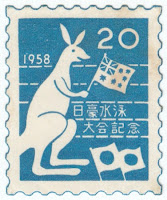 1958 Australian Stamp?
No explanation necessary.  I will happily add this to my growing collection of stamps.
Day #15:  Bet You Don't Have One of These... 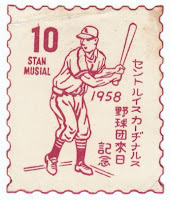 1958 Japanese Stamp?
You're right, Ryan.  Never seen this stamp or anything like it before.  And I scoured the internet and couldn't find out anything about it either.  One thing is certain... it's awesome!
Day #16:  Japanese Women's Pro Wrestling Rocks!!!! 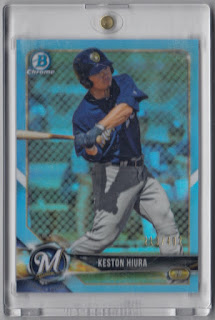 I'd much rather have this shiny refractor than ten brand new magnetics.
Day #18:  Let 'er Rip!

2015 CPBL Pack
Sorry Ryan.  I didn't have it in me to rip open this very unique pack.  It's headed into my unopened pack collection.
Day #19:  Good Luck.

2021 Topps Series 1 Pack
This pack on the other hand was meant to be busted.  Inside was this low numbered parallel:

2021 Topps Series 2 Pack
Very cool to see Tatis Jr. on the front of this pack.  Here are the two key cards I pulled from it:

2021 Topps #357
2021 Topps DH Debuts #DHD-10
Pretty sure this is my first Darvish card with him featured with the Padres.  And I'm not the biggest fan of the Braun, but I scanned it for those who like current Topps inserts.
Day #21:  Almost There...

2021 Topps Update Pack
Rounding out the unopened packs of Topps is this Update series pack.  I was happy to pull a shiny parallel of a guy I've actually heard of: 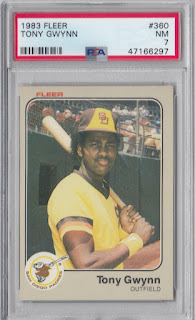 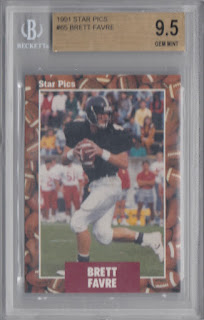 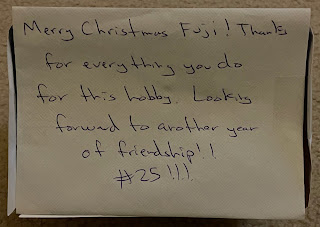 I gotta admit, I caught a glimpse of what was under the wrapping paper as I pulled it from the shipping box.  That being said, I was super excited to see this:

1996 Topps Baseball Set
I totally wanted one of these sets back when they were first released twenty-five years ago.  Then last weekend, I was reminded of this cool product on Pepino Man's YouTube video.  And a few days later, I had these four mini Mickey Mantle cereal boxes sitting in front of me.  It's a Sports Card Christmas Miracle!
Hey Ryan... thank you so much for this sports card advent calendar.  The thought and creativity you put into this Christmas present will forever be appreciated and never forgotten.  Not only did you add some fantastic cards to my collection... it also provided me with several hours of entertainment.
My only regret is not opening this package back on December 1st... and slowly revealing the presents as originally intended.  Regardless... this has to be one of the coolest ideas I've ever seen in regards to our hobby.
Hopefully this also provided entertainment for anyone who took the time to read this post as well.
Merry Christmas everyone!  Happy Saturday and sayonara!
Posted by Fuji at 9:00 AM 16 comments: