Imagine a world where baseball cards could talk.  Well that's exactly what the people at Topps and LJN envisioned back in 1989 when the created the Sports Talk Player: 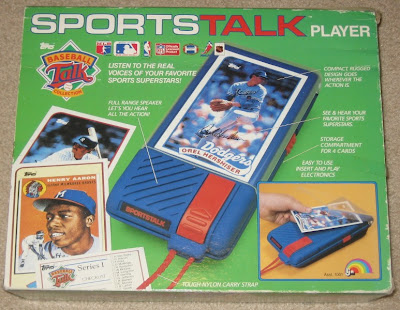 Each card has a small vinyl record glued to the back: 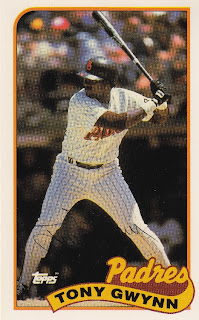 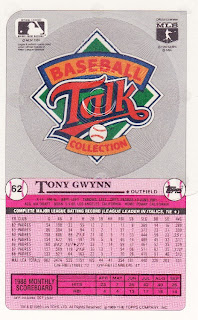 The player has a needle mechanism that spins around as it reads each individual card's record.

Assuming you had a few AA batteries laying around, collectors now had everything they needed to start listening to their favorite stars in just four simple steps:

Here's a commercial for the player from back in the day:

Collectors could purchase additional four card packs for around $4.  Each pack was clearly labeled with its contents, so collectors knew exactly what they were getting: 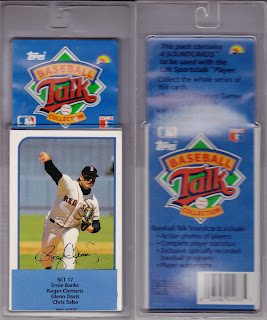 There were a total of 40 different packs to choose from and 164 cards in the set.  The first 8 cards in the set contained highlights from some of the greatest World Series games.  Cards #9 to #41 were retired stars and legends like: #17 Ernie Banks, #20 Babe Ruth, #27 Stan Musial, and #34 Pete Rose.

The remaining 123 cards (with the exception of card #164) consisted of rising stars, key veterans, and of course all of your favorite super stars. 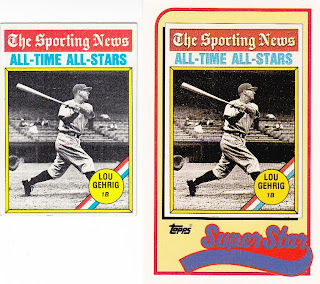 The odd size makes these cards difficult to store, but I discovered that four pocket pages seem to do the job.  They slide around a little, but as long as you don't turn your binder upside down you'll be okay.

How much can you expect to pay for a complete set and player?  I purchased a lot of three new players and four unopened packs for $35 (delivered) off of eBay a few months ago.  I ended up selling one of the players for $20 at the flea market and kept the other two.

Today's technology definitely makes the concept behind this product a little obsolete.  But if you're into 80's nostalgia or cool cardboard oddballs, then you should check these cards out.

Happy Tuesday and sayonara!
Posted by Fuji at 3:00 PM 21 comments:

Each card was printed on thick card stock and featured a portrait photograph of Hammerin' Hank, along with an action shot of another player.  The holographic foil used by Topps gave collectors in the 90's,  the "refractor" technology they loved.

The backs provided a comparison of the player's career numbers with the man himself.

As we all know, Bonds broke Aaron's home run record five years ago.  But ironically, he was included in the RBI section.  Speaking of RBI's.  A-Rod is the only remaining person who has a shot at that title.  He's currently 7th all-time and needs a little over 350 RBI's to become the new RBI King.

As of right now, none of the eight players in the set are enshrined in Cooperstown.  However depending on how you feel about the "Steroid Era", there should be anywhere from two to five future HOFers.

This is one of the rare times where the individual values add up to less than the complete set value.  If you took the time to look up each individual card, the 10 cards book for $57.  However, Beckett lists the whole set at $60.

McGwire and Bonds are the two highest valued cards at $10/each.  Griffey Jr. and A-Rod each have two cards in the set... and both are listed, along with Garciaparra, at $6/each.

Completed eBay sales show that singles of A-Rod, Griffey, and McGwire have all closed in the $5 range, so these prices technically fall between the low and high value range in Beckett. 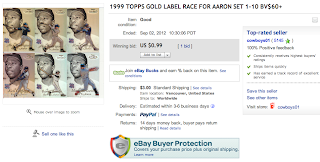 However, I lucked out and found a seller who listed the set as "Race for Aaron", instead of "Race to Aaron".  The error allowed me to grab the complete 10 card set for $3.99 (free shipping).

Have you ever capitalized on an eBay seller's grammatical or spelling error?

I'm sure I've lucked out before, but this is the only occasion I remember off the top of my head.

My parents always told me to try my best to be a honorable, humble human being.  But every now and then, I feel the need to boast and brag.  And today is one of those days.

I mean seriously... how am I suppose to be modest when I have a thirty-four inch piece of wood in my possession:

Isn't it a thing of beauty?  What's even cooler is the fact that my favorite baseball player once held my stick and left his mark on it: 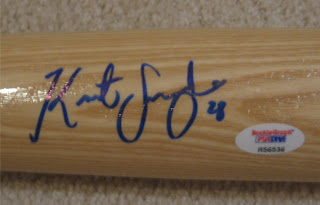 And if things couldn't get better... I practically stole this off of eBay:

Who says you can't find cheap thrills on the internet?

I hope you all had a happy ending to this wonderful week!  Sayonara!
Posted by Fuji at 3:00 PM 6 comments:

This Panda is Phat!

Anytime your name is mentioned in the same breathe as The Great Bambino, Mr. October, and El Hombre... you know you're in elite company. 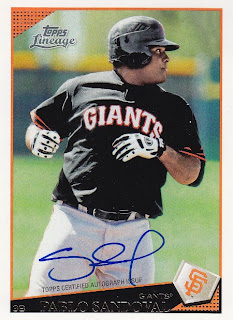 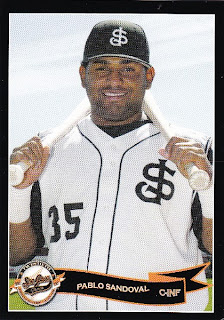 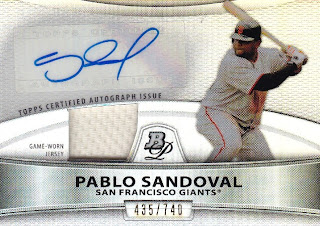 
Congratulations Mr. Sandoval!  One down... three more to go!

I'm a firm believer in the right to be found innocent, until proven guilty.  But things aren't looking good for Mr. Livestrong.

In the mid 90's, Armstrong battles testicular cancer that spread to his lungs and brain.  In 1997, he forms the Livestrong Foundation which benefits cancer research provides support for people affected by cancer.  Since then, they have raised over $470,000,000 to support their mission with over 80% of every dollar raised going directly to support their programs and services for cancer survivors.

On August 23rd, 2012... the US Anti-Doping Agency bans Armstrong from cycling for life.  Last week, he steps down as chairman for the Livestrong Foundation and many of his sponsors drop endorsement deals.  On Monday, the International Cycling Union strips him of his seven Tour de France titles.

Regardless if Armstrong is innocent or guilty... the damage has been done.  Once a symbol of hope, hard work, perseverance, and strength... he is now just a man with a damaged reputation.  One that I would not wish on my worst enemies.

Assuming no additional news comes out and Armstrong never admits to any of the charges...

How will you choose to remember Lance Armstrong?

I personally feel this is one of those situations where most people will remember the "bad" more than the "good".  I've always felt he was innocent... but I'm starting to feel that I've been living in denial.  In other words... things aren't looking good for Mr. Livestrong.

Email ThisBlogThis!Share to TwitterShare to FacebookShare to Pinterest
Labels: oddballs, si for kids, the good the bad and the ugly

Today marks the 40th Anniversary of the Oakland A's win over the Cincinnati Reds in Game 7 of the 1972 World Series.  The 3-2 win captured the A's first World Championship since its move to Oakland in 1968.

As a lifelong Athletics fan this team is very special to me, because I was born in 1972.  At the time of their victory, I was less than two months old.  So, obviously I didn't watch the series... but that doesn't keep me from collecting memorabilia from that memorable World Series. 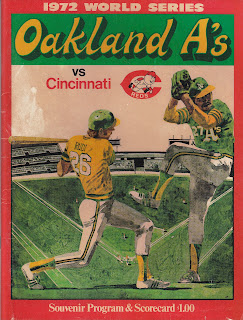 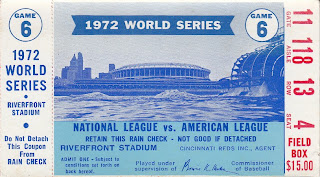 Plus in addition to this World Series being special for sentimental reasons, it was a great series altogether.

Besides the 8-1 pounding the Reds gave the Athletics in Game 6... every other game in the series was decided by one run.

Gene Tenace had four home runs in the series.  To put things into perspective, he only hit five home runs during the regular season.  And the only other Athletic to hit a home run during the series was Joe Rudi and he only had one.  Tenace also drove in 9 runs in the series.  The other Athletics?  Nobody on the team had more than one RBI and outside of Tenace, the team had only 7 RBI's combined.

Jim "Catfish" Hunter was the Athletics best starter during the regular season.  And he was the best starting pitcher during the series.  He was 2-0 with a 2.81 ERA against the Reds and pitched a solid 16 innings in three games.

And Rollie Fingers pitched in six games, allowing only 2 earned runs in 10.1 innings pitched.  He recorded 2 saves and struck out 11 in the series.

In his second season as the Oakland Athletics manager, Williams led the team to the best record in the American League.  His Athletics led the AL in home runs (134), shutouts (23), and saves (43).  Unfortunately, Williams didn't get along with Charlie Finley, the A's owner.  He resigned after the 1973 season.

Remarkably, the Athletics were able to win the World Series without their star right fielder, Reggie Jackson.  Jackson had injured his hamstring stealing home against the Detroit Tigers in Game 5 of the ALCS. 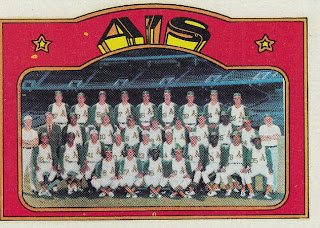 Congratulations to the 1972 World Champions!  You'll forever be a huge part of my PC and baseball fanhood.

Most of us have a favorite franchise... possibly two.  But...

Is there a specific team from a specific year that stands out in your collection?