Now that 2018 Topps has been out for a month now and collectors have had time to soak it in, I figured I'd take the time to compare and rank it to all of the other Topps baseball card designs from years ending in eight.

Although I have a great appreciation for card backs and their designs, my rankings will be based purely on the front designs.

Obviously every collector has their own likes and dislikes, so I encourage you to share your rankings in the comment section below. 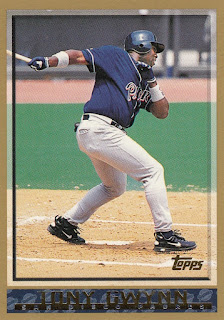 This was kind of a surprise.  For years, I've always thought that 1988 Topps was my least favorite Topps design.  But after looking at all of these designs side by side, I've revised my opinion.

I have mentioned it on here before, but in case you missed it... I'm not a big fan of gold.  This card is filled with it.  Gold borders.  Gold foil.  Gold Topps logo.  It's boring.  It's drab.  It's my least favorite of the 8's. 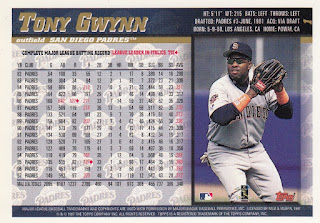 With that being said, I've gotta admit that the backs are really nice. 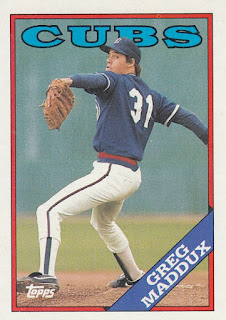 I have never liked this design.  Simplicity is usually a positive trait for me when it comes to card designs, but on these it's their biggest flaw.  It's just so blah.  Plus this product haunts me everywhere I look.  It's one of the most overproduced card sets of all-time and I can't dig through a dime box or walk around a flea market without stumbling across at least one of these. 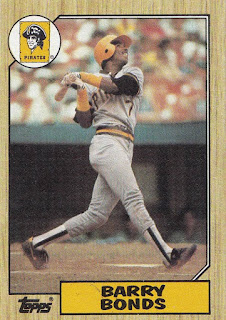 The other thing it has going against it is the fact that it was released the year after one of my favorite card designs of all-time: 1987 Topps. 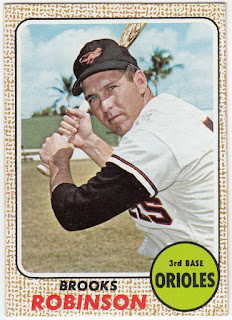 We're now entering the zone of indifferent designs.  The 1968 Topps design is like chocolate ice cream.  I never crave it, but I don't think I've ever turned it down either.

The burlap sack borders are kind of boring, but they don't bother me as much as some collectors.  And I actually like the circle located in the lower right that houses the player's position and team.  Personally, it helps break up the border. 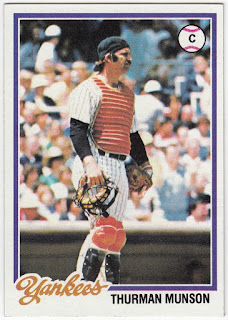 This design barely squeaked by the 1968 design, which means overall I consider it one of those middle of the pack designs in regards to these rankings.

The cursive team names add a little pizzazz to the design and the thin colored line complements the plain white borders.  And the little baseball containing the player's position is also a nice touch.

I just wish Topps had used the team colors for the lettering and the lines. 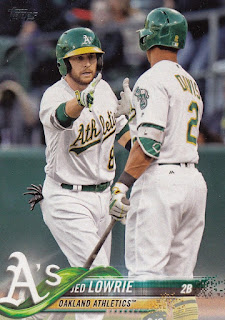 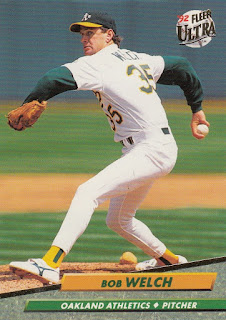 Despite the fact that I prefer my flagship Topps designs to have borders, I actually kind of like this design.  It definitely reminds of the 1992 Fleer Ultra baseball card design, but that's a good thing because I loved that product.  The water slide effect isn't really my style, but the giant team logo balances the design out. 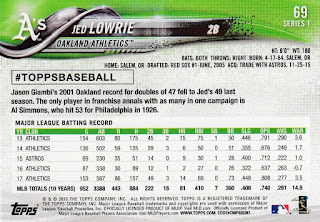 I have no intention of going out and purchasing this product, but it mainly has to do with the lack of complete career statistics on the back and the fact that they've been replaced by Twitter and Instagram information.  That's cardfoolery! 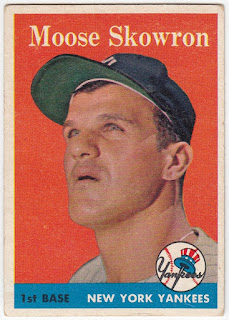 The thing that makes this card design stand out are the diecut players being superimposed on the brightly colored backgrounds, which seemed like a standard for the 50's.  I also really like the inclusion of the team logos, especially since most have evolved into something completely different over the past six decades. 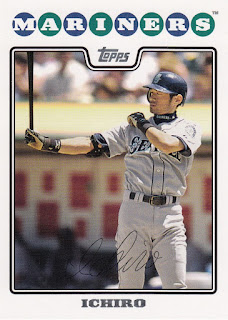 When I returned to the hobby back in 2008, this was one of the first card designs I saw and it was love at first sight.  The way Topps spelled out the team names in the team colored balls is the identifying feature with this design and the reason I love it.  I'm not exactly sure why, but I feel like this set design belongs in a different era.  Maybe the late 60's or early 70's?

Although this doesn't impact my vote on The Greatest Eight Debate, this set is also memorable because Topps used it for their basketball and football products as well.  Plus it'll always be a reminder of when I started collecting again.

So that's how I'd rank the Topps flagship set designs for the years ending in eight.  What about you?

Based on the card fronts, how would you rank them?

Happy Tuesday and sayonara!
Posted by Fuji at 3:00 PM 18 comments:

As a person who preaches responsibility on almost a regular basis, I feel one of my best and simplest pieces of advice is to always use protection.  If you truly care, wrap it up.  Y'know.  Wrap your rascal.

Sometime last week, I received this amazing Yoenis Cespedes patch card from Matt over at Bob Walk the Plank: 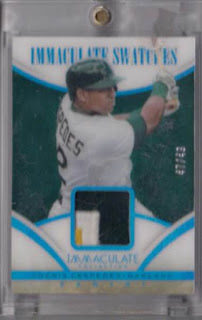 As you can see, he shipped it in a one touch magnetic holder, which happens to be the Cadillac of card protection.

I'm more of Honda or Toyota kind of guy, so I transferred the card into a penny sleeve, top loader, and team bag: 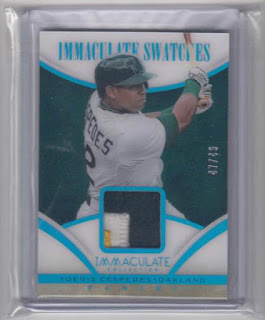 But before I triple protected my Cespedes, I took a quick pic of it in the buff, so you can view it its raw form: 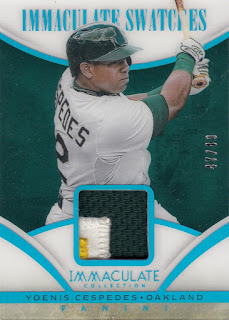 Isn't it glorious?  That 3-color patch is straight up dirty (in a good way).

Matt didn't stop there.  He also sent me this low #'d Rickey:

Rickey would definitely argue that this card is sexier than the Cespedes.  What do you think?

Personally, I feel that both are worthy of triple protection.

Speaking of triples... the third and final card in the package is this game used memorabilia card of Catfish Hunter: 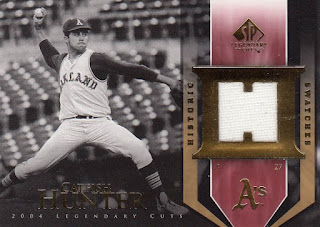 I know it's unattractive to pick favorites, but I gotta keep it real.  I saved this card for last, because I love this card just a little more than the others.  Hunter helped the A's win three straight World Series during the 70's and there's just something cool about owning a piece of his game used pants.

And just like the Cespedes and Henderson, you know I wrapped up the Hunter.  Three times.

This weekend is our last opportunity to get our Olympic fix.  Then the two year wait begins for the 2020 Summer Olympic Games in Tokyo.  I have to admit that outside of the first four snowboarding events and a few of the daily highlights, I really haven't paid attention to what's going on in Pyeongchang.

Even though I personally prefer cold weather over warm weather, I'm actually more of a Summer Olympics kind of guy.  In the past, I've enjoyed watching basketball, swimming, and the track events.  However in 2020, I'll probably be focusing on soccer, skateboarding, and baseball.

Yup.  Baseball will be back at the Olympics after a 12 year hiatus.

I can still remember opening packs of Topps back in 1985, pulling the Team USA subset cards, and thinking... damn these cards are cool.  Things became much, much cooler when Big Mac started launching bombs in route to winning the 1987 AL Rookie of the Year Award, because his card would eventually become one of the most recognizable cards from the era.

But we'll discuss that card in another post on a another day.  Today, I wanted to share a different Topps Team USA subset card.  It's not nearly as iconic or valuable, but in my humble opinion, it's just as cool. 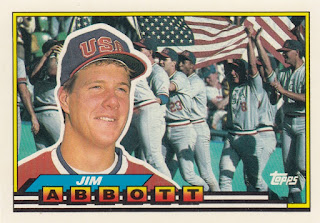 Jim Abbott is one of those players who has a cult-like following in our hobby which is 100% understandable.  The guy pitched ten seasons at the Major League level and threw a no-hitter against a Cleveland Indian's lineup that featured Kenny Lofton, Carlos Baerga, Albert Belle, Manny Ramirez, and Jim Thome.  And he accomplished these feats with only one hand.

But that's not what drew my attention to this card.  I've been trying to track one of these down for a few years, because its aesthetically pleasing.  I love the portrait shot of him wearing his Team USA gear superimposed onto the shot of him and his teammates celebrating their gold medal win over Japan in the 1988 Olympics. 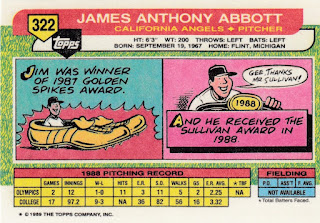 The back of the card is pretty cool too.  It features his 1988 collegiate and Olympic statistics, as well as two colorful cartoons that highlights his 1987 Golden Spikes (top amateur player) and 1988 Sullivan (outstanding amateur athlete) awards.

And although it's not considered to be his rookie card, it was a pack issued card from his rookie season.  This was kind of the icing on the cake for me.

So why did it take me so long to acquire a copy?  Well... it's comes down to pennies and pride.

Over the years, I've found a fair share of his rookie cards sitting in quarter bins and probably even dime boxes, so I just couldn't or wouldn't spend more than a couple quarters for it. 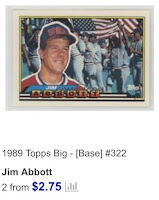 COMC has two copies available, but the $2.75 is almost laughable.

I considered grabbing a copy on Sportlots for 18¢ (+ shipping), but kept waiting for an opportunity to take advantage of combined shipping.

Then I stumbled across an eBay auction:

Do I actually need 113 of these?  Probably not.  But the price was right.

Plus they look so cool scattered about...

This isn't my first venture into purchasing multiple copies of a single card.  Back in the 80's, I loved buying and putting together rookie card lots of guys like Mike Greenwell, Will Clark, and Sam Horn. 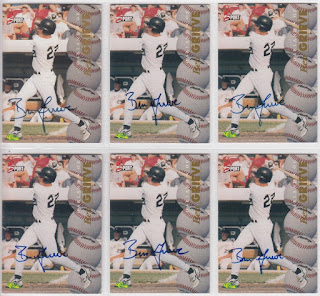 And it didn't stop there.  In the 90's, I purchased enough 1995 Classic 5 Sport Ben Grieve autographs to almost fill a 9-Pocket page. 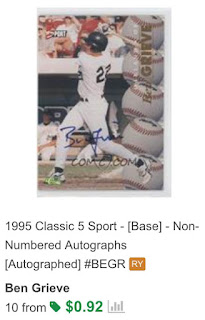 Sadly, I paid much more than 5¢ each or the 92¢ asking price currently on COMC.  Maybe that's why I've slowed down my need for multiple copies of cards.

Slowed Down ≠ Stopped.  Last week, Peter over at Baseball Every Night sent me a generous PWE that included this note: 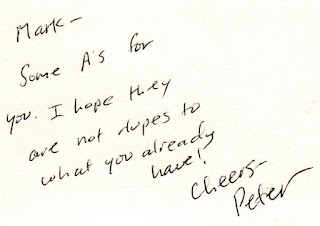 Let's see if there are any dupes in Peter's PWE.  First up...

This happens to be my very first taste of 2018 Topps baseball, so this Davis is definitely not a dupe. 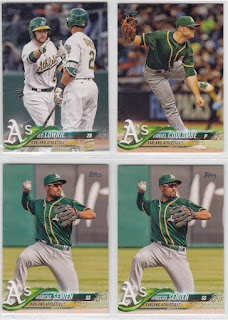 In addition to my first insert card of 2018, Peter hooked me up with my first four 2018 base cards.  Ironically... one of them was a dupe.  Don't worry Peter.  If you haven't noticed, duplicates aren't a problem.

The final card in the PWE was a card of Eck's set up man: 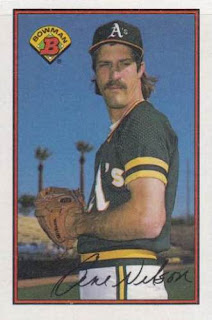 Is it a dupe?  Well... I have do have a 1989 Bowman factory set laying around somewhere.  Plus there's a good chance I have at least one of these sitting in my Oakland A's oversized box as well.  But it's much appreciated.  Worst case scenario is I buy another 98 copies and create a 100 card lot.

What's your stance on duplicates?

Do you have 100+ copies of any singles in your collection?

Happy Friday and sayonara!
Posted by Fuji at 3:00 PM 17 comments: