I've got to admit... I have a pretty good life.  I have quality friends and family that are always there when I need them.  I love my job.  The Oakland A's are headed to the playoffs.  I'm relatively healthy (knock on wood)... although, according to my doctor... I need to lose a few pounds.  And I really enjoy collecting cards and writing about it.  Overall... I don't have too many complaints.

But my life isn't perfect.  Some weeks are more hectic than others.  And last week was one of them.

Thankfully... the Serramonte Mall Sports Cards, Toys, and Collectibles Show is this weekend and yesterday I spent a better part of my Saturday hanging out there.  Which means that I had the opportunity to enjoy some quality Cardboard Meditation.

What the heck is that? 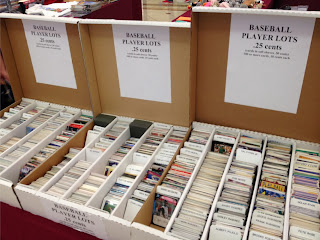 It's when you stand or sit in front of dime boxes... sifting through cards... and you enter the zone.  Visions of base cards (that still smell like bubblegum), inserts, oddballs, and parallels take over your mind and drown out the world around you.  Most importantly... it takes your mind off of your problems and you find yourself in a deep state of relaxation.

And when my meditation session was over, I walked away with this: 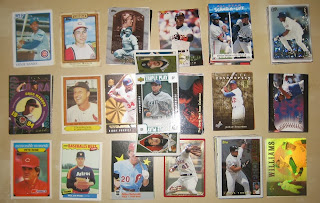 The damage?  These 231 inserts and oddballs set me back a total of $15.  If you're ever in the area, I encourage you to stop by Leon's dime boxes, because they are organized, well maintained, and very, very loaded.  And don't let the 25¢ sign scare you off.  He definitely offers bulk discounts.

There are a few other guys with cheap card bins at the show.  I found a few cards for my vintage card binder... 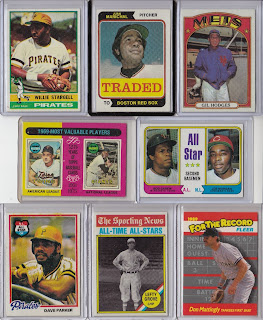 The top five cards were 50¢ each and the bottom three were 3 for 50¢... so the eight cards cost me $3.00.  I planned on going back and digging through his dime box, but ended up running out of time.

My final purchase were these two Legends magazines from the early 90's:

I'm always on the lookout for old sports card magazines and one dealer had a bunch.  Most of them were in the $2 to $3 range... but he had these two marked at 50¢ each, so I grabbed them.

Last... but certainly not least are these two Russell Wilsons that found their way into my collection:

Card shows are excellent places for Cardboard Meditation... but they also give collectors the opportunity to catch up with friends within our cardboard community.  Yesterday, I ran into my buddy Ryan who is not only a regular vendor at Serramonte, but he's also a prominent member of the YouTube community.  His username is im140 and his 49ers collection is one of the nicest I've seen.

He hasn't made videos in awhile, but if you're bored... I definitely recommend you checking  his channel out.  Anyways... his display cases were loaded with high end cards.  I asked him if he had any Russell Wilson autographs.  Unfortunately he didn't.  But he had these two rookie cards that I needed for my Seahawks PC.  I offered to buy them, but he insisted I take them.  Thanks Ryan!  Your generosity is much appreciated.

Well... that wraps up my latest card show experience.

Happy Sunday and sayonara!
Posted by Fuji at 3:30 PM 8 comments:

This morning, I wrote about a lopsided trade between me and Kenny (aka Zippy Zappy).  In short... the guy totally hooked me up.  But I actually left out some of the coolest cards in the bunch.

Now since I'm a middle school teacher, who has students who check out my blog from time to time... allow me to make a few disclaimers.

A.  These cards are completely PG Rated.
B.  They are a very generous bonus that were not part of our original trade, but much appreciated.
C.  Depict a famous Japanese actress and singer.

Okay... now that I have gotten that out of the way.  Let's check out five 9-pocket pages of Yumi Sugimoto: 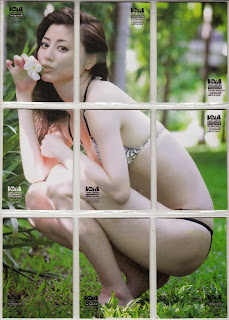 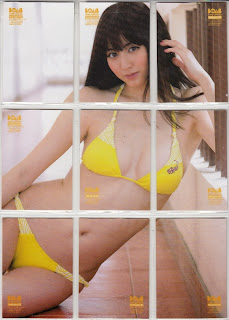 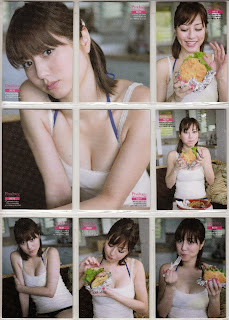 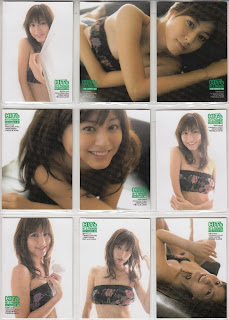 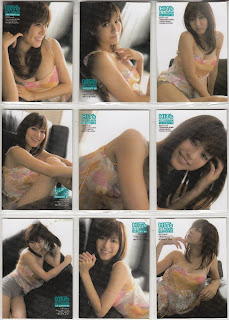 Before yesterday, I had never heard of Ms. Sugimoto.  But I looked her up on Wikipedia and YouTube.  She's actually has a pretty decent voice.  If you have a few minutes, go check out her video, Harukoi.

Thanks again Kenny for the awesome trade.  These cards are excellent additions to my Japanese PC binder.

Happy Saturday and sayonara!
Posted by Fuji at 6:00 PM 5 comments: 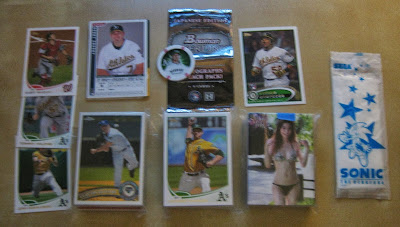 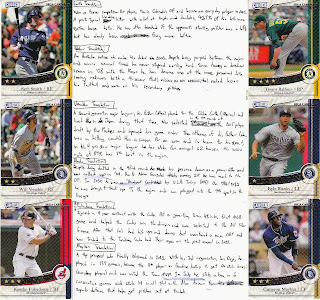 Happy Saturday and sayonara!
Posted by Fuji at 9:00 AM 5 comments:

What were you doing fifteen years ago?  Anyone else entranced by Sammy Sosa, Mark McGwire, and The Chase?

Yesterday marked the 15th anniversary of Sammy Sosa hitting his 66th home run of the season.  And for a brief moment, he took the lead in the home run race against Mark McGwire.


Forty-two minutes later, McGwire tied it.  Over the next two days, McGwire would hit four more to end the season with 70 home runs.  History had been made.

But this post isn't about PED's.  It's a showcase of my memorabilia relating to The Great Chase of 1998 and how they remind me of those exciting days of checking Sports Center every night for updates the epic battle between these two beasts with bats.

Let's kick things off with these sweet inserts from 1998 Topps Gold Label baseball:

I'm a huge fan of the dual image design, refractor like technology, and high quality card stock that this insert set delivered.  I'm still missing the Ken Griffey Jr. from this set.  Luckily these inserts are very affordable.  All four cards in the set range from $1.25 to $1.75 on COMC.  It probably has to do with the fact that they were very easy to pull from packs... seeded at a rate of two per box.

If so... here's another beauty: 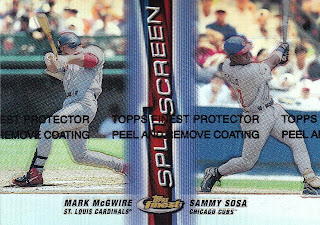 These were relatively tough pulls back in the late 90's... inserted into one out of eighty-two retail and hobby packs.  There are fourteen cards in the set, so the odds of pulling this specific card was pretty bleak.  These days you find them in the $4 to $6 range, but back in the day these booked for $90 (Tuff Stuff September 1999).

It's hard to write a 90's sports memorabilia post without at least mentioning Kenner Starting Lineups.  Kenner... like every other collectibles company... jumped on the McGwire/Sosa bandwagon: 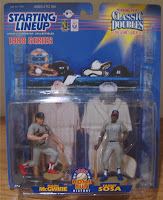 These were super hot in the late 90's.  If I remember correctly, the card shop I worked at sold these for $25 to $35 when they had them in stock.  These days you can find them on eBay for around $8 delivered.

And it's impossible to mention sports figures without showing off these: 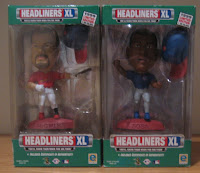 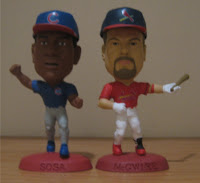 These aren't your standard 2" Corinthian Headliners.  These are the XL's!  These boys are big.  Probably around 6"... maybe 7" tall.  I thought they stopped making these in the mid 90's.  I'm pretty sure the last Headliner I purchased before these two... was a 1996 Brett Favre.

Finally, I'll show of some of my McGwire and Sosa bling, bling: 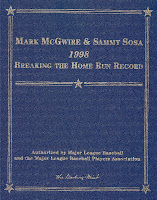 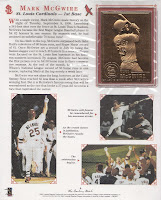 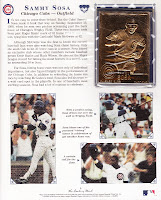 
As with everything else in this post... these haven't held their value.  These were originally sold for $125.  I paid 99¢ (+ $6.95 shipping).  These are actually pretty nice and I might have to track down other Danbury Mint cards in the future... especially if they're as cheap as these.

I'll wrap things up by showing off one more item related to The Chase: 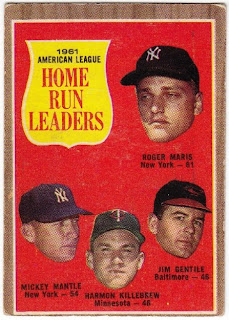 I've been collecting cards for over thirty years and only recently purchased this awesome card.  In fact, this post actually inspired me to buy it.

Anyone else hold onto their McGwire and Sosa collectibles from the late 90's? 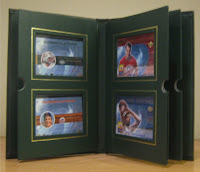 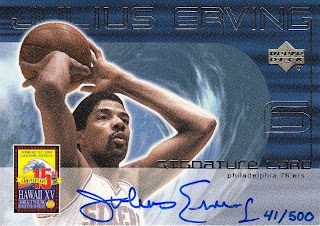 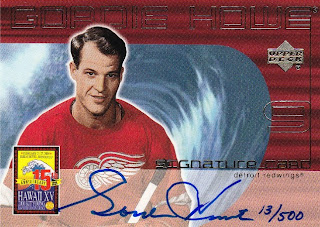 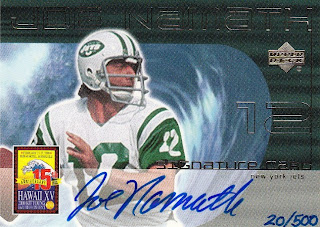 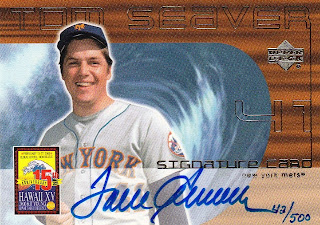 Happy Tuesday and sayonara!
Posted by Fuji at 3:00 PM 16 comments: