Yesterday, I had several students enter my 4th period class talking like pirates.  Things got pretty contagious and it didn't take long before a third of them were saying "aye, aye captain" and "thar she blows".  I let it go for part of the class... but eventually, I shut it down.

Towards the end of the period, I asked one of them... "what's up with the pirate talk?".  He replied "it's Pirate Day".  A quick Google search quickly revealed that it was actually... International Talk Like A Pirate Day.

Anyways... I realized that I never really post any Pittsburgh Pirates cards on my blog.  So even though I'm a day late, I figured there's no better time than to show a few of my favorites: 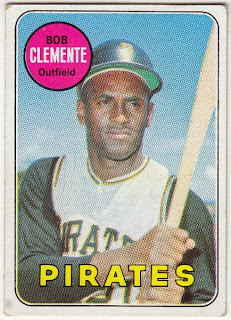 The Pittsburgh Pirates have had plenty of superstars take the field donning the black, white, and yellow uniforms.  But the first person that comes to my mind is Roberto Clemente.  It's unfortunate that he passed away at such a young age.  But his on the field and off the field accomplishments will never be forgotten.

How many other MLB players have thrown a no-hitter, while on LSD?

In 1959, Face set the single season record for win-loss percentage when he went 18-1 for the Pirates.

What do Barry Bonds, Dave Parker, Paul Waner, Willie Stargell, Roberto Clemente, and Dick Groat all have in common?  They've all won MVP awards as members of the Pittsburgh Pirates.

There have been two Pittsburgh Pirates who have won the Cy Young Award.  Vern Law is one of them.  Can you name the other?

The Mad Dog was one of my favorite players growing up.  Damn... could this guy hit.

The only guy in the history of the MLB to hit a walk off home run in the 7th game of the World Series.  And he did it against the New York Yankees!

I love it when a player spends his entire career with one franchise.  Pops was one of those guys.  Pittsburgh Pirates fans had the opportunity to watch him play for twenty-one years. 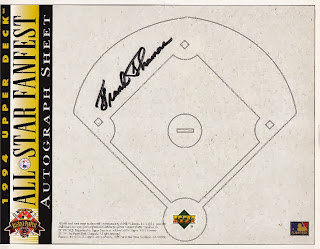 Most people think of The Big Hurt when they hear the name Frank Thomas.  But I'm sure there are plenty of Pirates' fans who remember this guy.  During the 50's, Thomas was a solid hitter for the Pirates and represented Pittsburgh three times in the MLB All-Star game.

Okay... that's pretty much the finest Pirates cards in the PC.  But before I be shovin' off... here's one of my favorite pirate videos:

Happy Friday and Godspeed!
Posted by Fuji at 8:00 PM