I just watched the Green Bay Packers fight back from a 14 point deficit... only to watch them completely fall apart in the 4th quarter.  So I figured it's a great opportunity to show off some of my newly acquired, but busted up Packers.

As you may already know... I love bobble heads.  So when I stumbled across a series of eight Green Bay Packers known as The Legends of Lambeau, I knew I had to have them.

There are a bunch of sellers on eBay with these.  But week in and week out... I ran into three problems:

#1 - The series was broken down into four packages... each containing two bobbles.  While there are plenty of vendors with one or two of the packages, there weren't a lot of people selling the complete set.

#2 - Vendors with complete sets weren't within my price range.

#3 - Buying from different vendors wasn't practical due to shipping costs.

Thus... the waiting game began.  And after a year of searching, I finally came across a vendor who had a complete set with a opening bid that I was willing to pay.

A few days later, I popped them open only to find this: 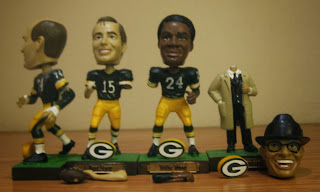 Yup... that's Vince Lombardi with a broken neck and Bart Starr with two broken arms.  Well.. I immediately contacted the seller and we came to an agreement.

If I shipped back the bobbles, then the only one who wins is the United States Postal Service.  So he offered me a partial refund and I went out and picked up some Gorilla Super Glue.  Twenty-four hours later, everyone was patched up and looking like this...

2007 Pick N' Save and Copps Legends of Lambeau Bobbles

With that being said... my afternoon is starting to look a little brighter.  The A's just won the West... thanks to Kansas City Royals.  Andrew Cashner is keeping the Padres in it against the Dodgers as they try to beat them in the rubber match.  And if that wasn't enough... the Seahawks are taking care of business against the Jacksonville Jaguars.  However... if they choke like the Packers did... I might need to seek counseling.