What If My Dad Collected Cards...

Yesterday I celebrated my forty-first birthday.  At this point in life, I'm not big on celebrating this annual event.  It usually involves a few presents from students, some Facebook messages from friends I don't get to see on a regular basis, a few phone calls, and three or four birthday dinners with friends, family, and co-workers.  Like I said... nothing huge.

But one thing I enjoy about my birthday is something I started a few years ago called... the Birthday PC.  It's primarily an autograph collection of athletes who share the same birthday as me.

Since then, I started collecting other pieces of memorabilia as well... such as this September 1972 issue of The Trader Speaks: 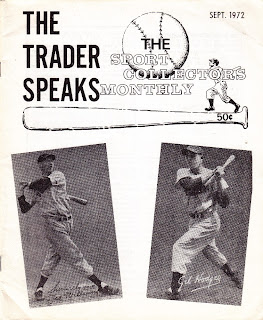 I had never heard of this magazine, but someone mentioned it on one of my posts... so I tracked it down.  It's supposedly the "must have" magazine for baseball card collectors during the 70's.

This particular issue had no articles... but was packed with advertisements, want ads, and auction listings... which leads me to the point of this post.

I have always thought it was cool when I read about collectors starting collections for their children... sometimes even before they're born.  One of my buddies has purchased every Topps factory baseball set for his son since 2008... his son's birth year.

This got me thinking how cool it would have been had my dad decided to do that for me.

A quick look into my issue of The Trader Speaks reveals that he could have purchased a complete set of 1972 Topps baseball cards for $12.75: 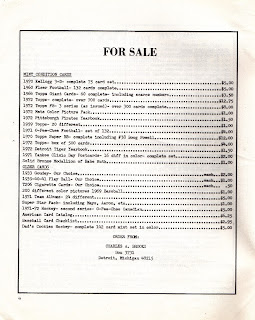 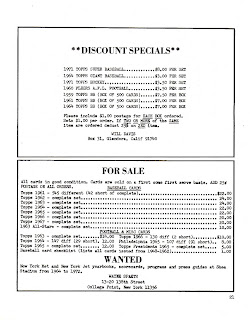 Unfortunately, he didn't.  But nine years later, he bought me a 1981 Fleer baseball card set... which was the first complete set I ever owned.  It doesn't quite carry the monetary value of the 1972 Topps set, but its sentimental value can't be matched.


Do you remember the first card, pack of cards, or set of cards your mom or dad ever bought you?  If so... what was it?

Click here to check out last month's contest winners as well as enter the September contest.


Happy Monday and sayonara!
Posted by Fuji at 9:00 AM