Enough For A Sleeve

A friend of mine has a bunch of tattoos.  He has them on his arms, chest, back, neck, and even on his hands.  And if I'm not mistaken, I'm pretty sure he mentioned that he was addicted to "ink".

Well I now know exactly what he means.  Earlier this month, I got my first tattoo.  After that... I just had to have more, so I headed over to eBay and picked up a box of 1986 Topps Baseball Tattoos: 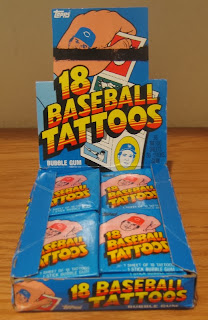 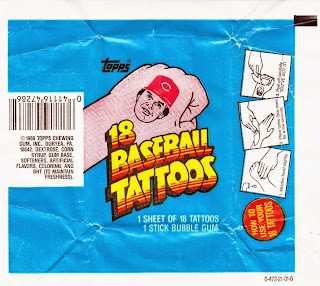 And although they advertise that each sheet has 18 tattoos... there's actually only 16:  8 players and 8 action shots.

Collation was pretty good.  I came up one sheet short of a complete set of 24 sheets. 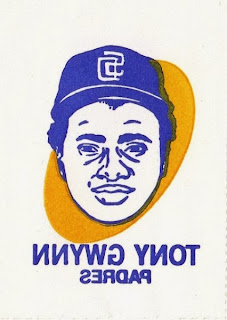 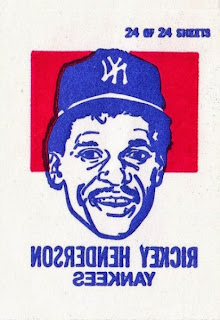 I'm not quite sure which arm I'm going to put these bad boys on, but I'm certain that beautiful Rose is going to be planted on my lower back.

Happy Hump Day and sayonara!
Posted by Fuji at 9:00 AM 14 comments:

If there was ever a "peak" to my collecting years... it was probably the "90's".  Back then, I collected almost anything related to sports and sports cards.  Which means... I even collected those limited edition 23kt gold cards that were being sold on late night sports collectible shows.

I remember owning a Cal Ripken Jr. commemorative gold plated card along with several Michael Jordan gold cards too.  These days you can routinely find them at flea markets and garage sales for a fraction of the price. 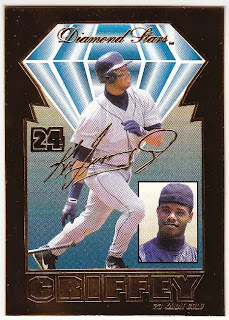 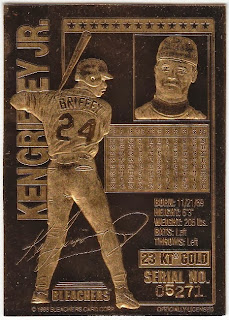 The card came in a specially marked box that points out to prospective buyers that each card is individually serial numbered and only produced during the course of 10 striking days. 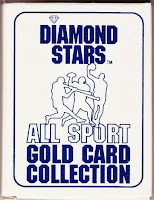 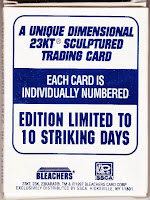 And if that wasn't good enough, Bleachers also included a Certificate of Authenticity that certifies that Mr. Griffey himself approves of this product.

So what are you waiting for?  Head down to your bank, pull out wads of cash, and start investing in 23kt gold cards before you miss the boat and they get red hot again..

Happy Monday and sayonara!
Posted by Fuji at 9:00 AM 17 comments:

Walter Payton, Jim Brown, Earl Campbell.  They're some of the greatest running backs of all-time.  But the fact is... they don't crack my top 5.  In fact, they don't even get an honorable mention.

It's simple... they were a little before my time.  Sure, I've seen highlight films that make me appreciate what they've brought to the sport.  However, my list only includes players I've followed since I became a NFL fanatic back in the early 80's.

So let's start things off with three backs who just missed the list:

The Nigerian Nightmare and Beast Mode himself.  Anyone else appreciate a quality power back? 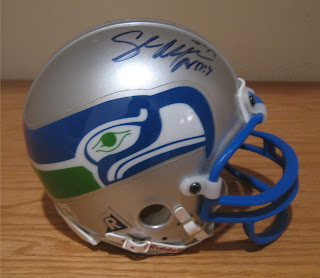 Alexander holds nearly every Seahawks single and career franchise rushing record.  During his eight seasons with the Hawks, the team went to the playoffs five times and had a 69-54 record. 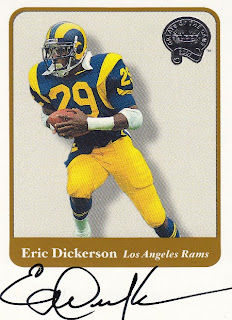 The guy rushed for 2,105 yards in his second season and wore goggles like Kareem.  Heck yeah, I thought Dickerson was cool. 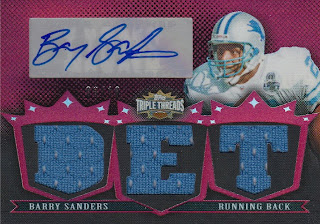 No doubt... the best running back I've ever watched.  He's seriously in a league of his own. 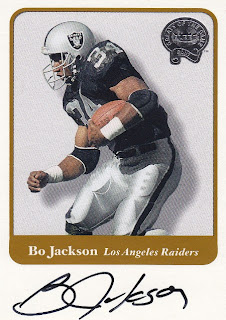 Fuji knows Bo, because Bo single-handedly destroyed my favorite team on Monday Night Football during his rookie season.  It was one of the greatest performances I've had the (dis)pleasure of witnessing.  He left me no choice, but to bow down and idolize him.  Bo = Beast. 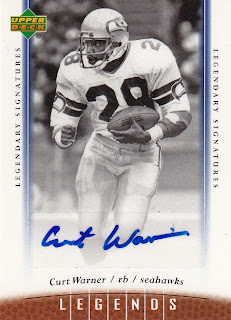 Surprised?  Let me explain.  As a kid, he was my favorite running back on my favorite team.    Sentimental pick?  No doubt.  And it's quite possible that he'll still be my number one in twenty years too.

Who are your five favorite running backs?

Remember... they don't necessarily have to be the five greatest running backs of all-time.  Although I'd love to hear those responses too.

Enjoy the rest of your weekend and sayonara!
Posted by Fuji at 9:00 PM 22 comments:

The whole flea market fascination is slowly losing its lustre.  For the past several years, it's been one of the things I look forward to each and every weekend.  But lately... I'd rather sleep in, watch football, or sleep in and then watch football.

But last Sunday, I forced myself to get out of bed and head out to the Capitol Flea Market.  It was nice to get out, breathe in some fresh air, and grab a little exercise.  Plus I was able to find a few vendors with collectibles.

Three things attracted me to these packs:

Unfortunately, I didn't pull a single Tony Gwynn from the entire 72 pack lot.  But for $5... I can't complain.  It was fun to sit down in front of the television and rip into these packs. 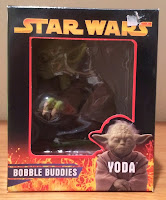 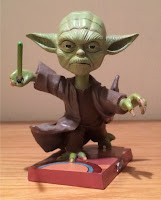 I'm not going to lie.  Every time I look at this bobble, I see Lord Voldemort instead of Yoda.  But for $2, I couldn't pass it up. 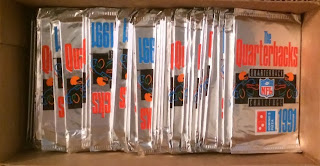 That's not a typo.  I found a guy selling a box full of these packs at a quarter a piece.  I originally was going to buy 20 packs, but then he told me he'd sell the whole box for $10.  I countered with $7 and he accepted.

If you're not familiar with this set, it's actually pretty nice and was the first football set Upper Deck ever produced.

Oh and before I forget, I was fortunate enough to stumble across these again: 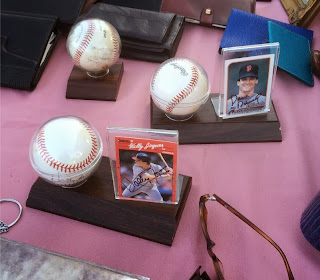 If you have no idea what I'm talking about, you might want to skim through this post.  In short, I came across these two autographed balls (Wally Joyner and Dave Dravecky) that a lady was selling for $150 each a couple of months ago.

It's no surprise that she hasn't sold them.  In fact, the price has gone up the past two months.  She now wants $200 for the Dravecky.  Joyner fans can rejoice in knowing that she has kept the $150 price tag for that ball.

Happy Friday and sayonara!
Posted by Fuji at 3:00 PM 19 comments:

Earlier in the month, Douglas over at Sportscards From The Dollar Store contacted me about a possible trade.

He had this Earl Thomas for my Seattle Seahawks PC:

Plus this Patrick Marleau for my San Jose Sharks PC:

And finally... this Devin Setoguchi for my Minnesota Wild PC:

Just kidding.  I don't collect Minnesota Wild cards.  But if you've followed my blog long enough, you probably know that Seto was my favorite Shark for a few years.  Anyways... it's the first jersey card of him that I've grabbed that features him in his Minnesota uniform and probably my last.  One of these days, maybe I'll add a memorabilia card of him wearing his Winnipeg Jets jersey.  But for now, I'll continue to stick to his Sharks cards.

Speaking of Sharks cards... Douglas also threw in a bunch of extra Sharks cards and a few San Francisco Giants refractors for my students.

Thanks for the trade Douglas!  I hope my package arrives across the border soon.

By the way... if you're interested in trading with Douglas, here's a quick glance at what he collects: 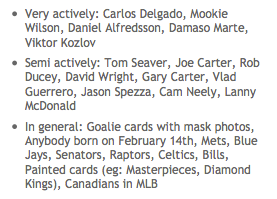 Go head over to his blog for a more in-depth look at his collection.

I haven't busted wax packs at the local card shop in years.  However... once upon a time, I was one of those guys standing around pointing at boxes and busting packs in search of the next big hit.

And on one of those occasions... I lucked out and pulled this 1998 Donruss Signature "Significant Signatures" autograph of the late, great Stan "The Man" Musial: 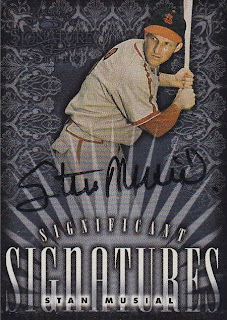 Pretty sweet... right?  Wrong.  If you look carefully at the bottom edge, the card was damaged in the packaging process:

For years, I made the most of a bad situation and this card has been the centerpiece of my Damaged Card PC.  But recently with the purchase of the Sandy Koufax autograph from this set... I've been contemplating putting together this set full of hall of famer signatures.

This eventually led me to using some leftover birthday funds on this: 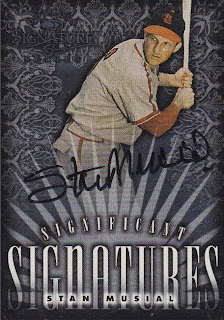 It's an upgraded copy without the embossed bottom edge.  And now that I have the Koufax, Musial, Mattingly, Ozzie, Ryan, Killebrew, Hunter, and Banks... I'm at the point where I think I'm going to pull the trigger and build the set.

So if anyone out there has any of these autographs for trade or sale, let me know what you're looking for in return.

Happy Wednesday and sayonara!
Posted by Fuji at 3:00 PM 18 comments:

This probably sounds insane, but Turner Broadcasting System has actually had an influence on one of my personal collections.  You're probably wondering... what does a television station have to do with collecting baseball cards?

Well... back in the 90's I spent a better part of the decade watching baseball games on the boob tube.  And it seemed like whenever I turned on TBS... there was a Atlanta Braves' game on.  But the Braves of the 90's weren't your ordinary team.  They were loaded with talent and super fun to watch.

And it didn't take long for me to start cheering for their pitching ace... Mr. Gregory Alan Maddux.  In fact, he quickly became my favorite pitcher.  It was amazing how he could get some of the greatest hitters in the game to ground out... utilizing a complete arsenal of pitches instead of an overpowering fastball.

Over the years, I've slowly built a collection of Greg Maddux rookies, inserts, autographs, parallels, and memorabilia cards.  But there's one card that has sat atop my wantlist for nearly four years.  And earlier this month, I finally crossed it off.

Anyone else familiar with these?  They're solid metal cards that Pinnacle inserted into hobby boxes of X-Press baseball (there's a football set too).  This particular card is the standard bronze version, which isn't serial number and theoretically should have been the easiest for me to acquire.  Over the years, I had no trouble finding it... but I refused to overpay and waited until I found one at a reasonable price.

Meanwhile... these two cards sat in my Maddux collection waiting for their bronze brother to join them:

Unfortunately... the bulk of my Maddux PC is sitting in my parent's house in Las Vegas.  But I'm planning on visiting them in the next few months, so eventually the Maddux family reunion will take place.


Did anyone else spend a portion of the 90's watching Atlanta Braves games on TBS?

Happy Monday and sayonara!
Posted by Fuji at 3:00 PM 17 comments: