I Overpaid & I Liked It 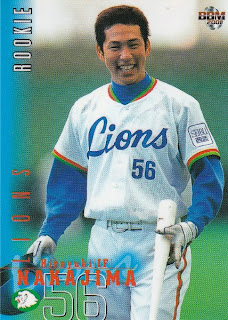 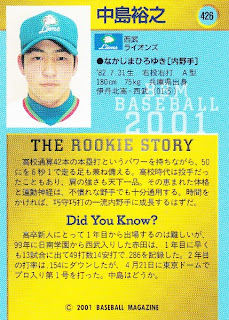 I haven't asked my friends to describe me lately, but I'm sure at some point the word "cheap" would be mentioned.

The fact is... I've been "stingy" ever since I moved out of my parent's house and entered the real world.  That doesn't mean I don't buy nice things for myself.  I just make sure that I'm getting the best price or at the very least a good deal.

On the other hand, every now & then, I'll climb out of my shell to splurge on something I really want.  One of those things was this Hiroyuki Nakajima's 2001 BBM rookie card.  If you're not familiar with Nakajima, he's the latest Japanese baseball player to cross the Pacific and enter the MLB.

I was pretty excited when I heard the Oakland A's signed him to a two year contract back in December.  Unfortunately, the odds of him becoming the next Ichiro are next to none.  He's struggle at the plate and on the field this Spring, so there's a chance he won't start on an every day basis, which means I'll never recover the $4.99 I paid for this card.

Oh well... worst case scenarios... everyone can use a Hiro in their life.

Almost forgot.  Only two days left in March.  Check back on Monday to see who won this month's contest.  Plus there'll be details on April's contest.
Posted by Fuji at 3:00 PM 8 comments:

Leaf has some serious stones!

I mean... seriously.  Who the heck came up with the autographed "stone" idea?  I'm sure somebody lost their job over this, because this epitomizes "cardfoolery".  For those who are unfamiliar with my made up word, it means a foolish sports card creation.

On the other hand, who am I to judge?  I actually went out and purchased the pair.

The fact is... they haven't held their value on the secondary market.  Which means that if you're looking for an affordable way to collect autographs of Tony Gwynn or Greg Maddux, than these cards might be for you.

Okay... it's your turn to chime in.  I'm looking for other cards to feature in my "cardfoolery" series:

Can you think of any sports cards or sports card products that are pretty ridiculous?

After some research, I discovered that these "stones" were originally used on Southland Plastics figurines in the 90's.  Here's what the Tony Gwynn figure looks like: 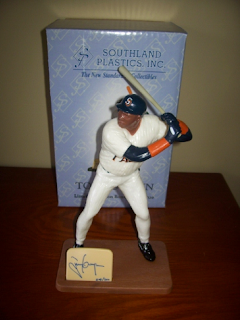 The Right Place @ The Right Time 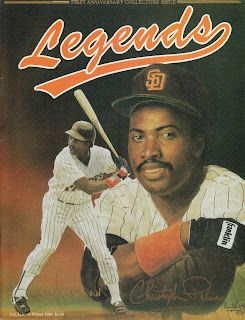 Back in the late 80's, a magazine called Legends Sports Memorabilia entered our hobby.  In short, it was another price guide that included uncut sheets of sports cards and postcards.  However, the paper stock used for this magazine was of much higher quality compared to Beckett, Tuff Stuff, Baseball Cards, and Sports Collectors Digest.  I guess you could call it a highend price guide.

I was able to acquire several issues of this magazine during a recent flea market find and in one of the issues I stumbled across this offer: 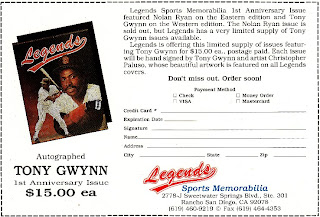 I thought it was pretty cool, because you could buy a special anniversary issue that was autographed by Tony Gwynn for only $15 postage paid.

Well... Tony Gwynn just happens to be my favorite baseball player, so that got me thinking...  I wonder how much these magazines sell for on eBay?

Unfortunately, there weren't any completed listings.  However, there just happened to be an auction for one ending later on that afternoon.  I couldn't believe my luck.  Had I not skimmed through these magazines that afternoon, I would have never started this search.

And that wasn't the best news.  At the time, the auction was under $6 with less than four hours remaining.  Of course, I waited until the very end of the auction and entered a maximum bid of $20.

Here's how the auction ended:

I know what you're thinking... it's $2.16 more than collectors had to pay back in the early 90's.  But c'mon guys... there's something called inflation.  I currently have myself on a very tight spending budget, but there was no way that I was going to let this Gwynn slip away without a fight.

On October 1st, 1976, Bert "Campy" Campaneris played his final game as an Oakland Athletic.  I was barely four years old, so I'd be lying if I told you I remembered any specific moments of his years with the A's.

But that's what newspapers, magazines, and the internet is for.  Campy is a legend and fan favorite to many Oakland A's fans.  He was a huge part of the Athletics back to back to back World Series Championships in the 70's and still holds these franchise records: 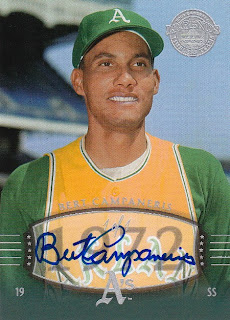 Which is why, I couldn't pass up the opportunity to add this 1 of 1, on-card autograph of Campy to my collection.

Last year, GCRL posted this card on his blog and I complimented him on owning this fine piece of cardboard.  We emailed each other a few times and he told me that it was available for me to purchase.

Unfortunately the holiday season was approaching and I had to focus my funds on presents for friends and family.  Then last month, I asked him if the card was still available.  We hammered out a price and as of Friday the card officially has a new owner.

He also threw in this awesome Vida Blue oddball issue: 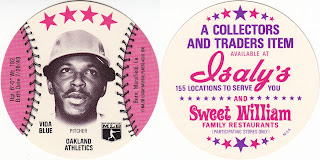 It's card #3 from the 1976 Isaly Disc set and it's in pristine condition.  According to baseballcardpedia.com, it's a 70 card set that was regionally distributed in the Pittsburgh area at Isaly Dairy and Sweet William Restaurants.

Thanks GCRL for selling me the Campy and throwing in the Vida oddball issue.  I promise to provide both of these cards a nice home.

Everyday I learn something new from all of the amazing bloggers out there.  Sometimes it's cool, oddball issues I've never heard of.  Other times, it's interesting facts about athletes.

Earlier today, I heard about the passing of Virgil "Fire" Trucks after reading foul bunt's touching tribute.  William's posts eventually inspired me to track down one of Mr. Trucks' autographs: 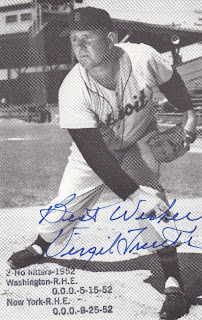 March has been a record setting month for me as I recently wrapped up my 5th cardboard transaction with a fellow blogger.  This time I was contacted by Dion over at Dion's IP Autos Only.

If you're a fan of autographs, then Dion is your man.  He sent me a trade list with over 1,000 autographs... most of which, he acquired in person.

I ended up sending him autographed cards of Kelly Johnson, Carlos Zambrano, and Thaddeus Young for the following...

I'm a huge fan of 1986 Topps baseball cards signed in black Sharpie.  I ended up choosing these four from his list, because I remembered watching them shine during my childhood.  The Baltimore Orioles starting rotation was awesome when I was a kid and two of the reasons are shown above.  Flanagan was the 1979 AL Cy Young Award Winner, while McGregor had eleven or more wins from 1978 to 1986.

Hargrove was the 1974 AL Rookie of the Year and hit .285 or higher in nine of his twelve seasons in the MLB.  And finally there was Mr. Johnstone, who also had a few solid years at the plate.  However, I tend to remember him more for the pranks he played on fellow ballplayers. 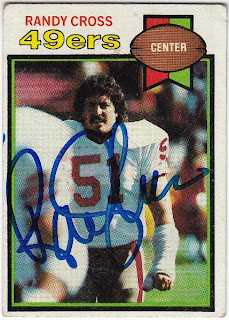 Cross was a Pro Bowl offensive lineman for those San Francisco 49ers teams that won a bunch of Super Bowls in the 80's.  I'm not a 49ers fan, but most of my friends are.  I'm sure one of them will give Cross a nice home. 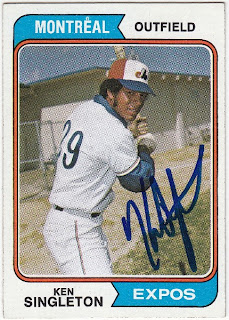 And finally... my favorite autograph is this 1974 Topps Ken Singleton.  He's probably most remembered for his years in Baltimore, but this card is a nice addition to my Montreal Expos PC.

In addition to the autographs, Dion also helped me finish off three sets I had been working on: 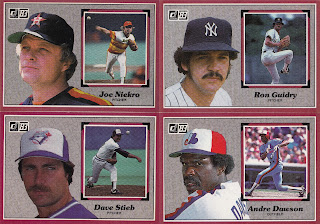 Thanks for the trade, Dion.  Happy Sunday & sayonara!
Posted by Fuji at 9:00 AM 7 comments:

Anyone else enjoy flipping through Larry Fritsch Cards catalogs?  I know that their prices tend to be a little over the top, but it's chock-full of interesting oddballs and reprint sets.  That's where I discovered the 1984-89 O'Connell and Son Ink set.

According to what I've read on the internet, the entire 250 card set was based on pen and ink prints by T.S. O'Connell.  If the name sounds familiar, it's because he's the former editor of Sports Collectors Digest and the guy who took a lot of heat for the whole "Coach's Corner" debacle.

Getting back to the set... I've always wanted to add a few of these singles to my collection and thanks to COMC, I was able to grab a trio of players I collect for under two bucks: 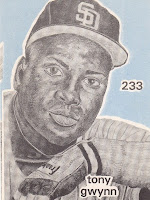 They're not exactly highend cards.  In fact, they're printed on thin, white, glossy stock paper and have nothing written on the back.  But they're unique, cheap, and are definitely cool additions to my PC.

Happy Friday and sayonara!
Posted by Fuji at 1:35 AM 8 comments: 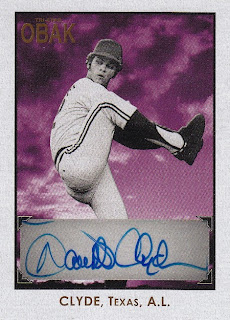 Imagine yourself allowing only three earned runs in 148 innings pitched and going 18-0 for the season.  That's exactly what David Clyde did his senior year at Westchester High School in Houston, Texas back in 1972.

The Texas Rangers selected him with the first overall pick in the 1973 MLB Draft and gave him the highest bonus ever given to a draft pick at the time.  Three weeks after his final high school game, Clyde made his MLB debut against the Minnesota Twins.  In front of 35,000 fans at Arlington Stadium, he struck out eight batters, walked seven, allowed two earned runs, and gave up only one hit (a two run blast by Mike Adams) in route to his first career win.

That season, Clyde continued to draw fans to the ballpark, but unfortunately never lived up to the hype.  By the age of twenty-six, he was completely out of baseball.  He finished his career with a subpar 18-33 record and a 4.63 ERA.  A lot of people, including Clyde, felt that the Rangers' decision to rush him to the majors was a mistake.

It's a shame that fans, especially Rangers fans, will never know what could have been.

But maybe the Nationals were on to something when they decided to shut down Strasburg early last season. 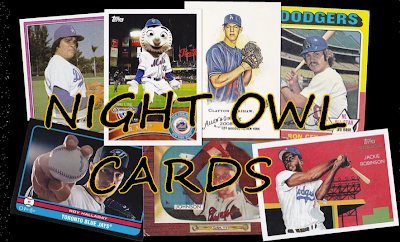 The Night Owl dropped off a present on Monday.  Inside was an assortment of Oakland A's cards for my collection. 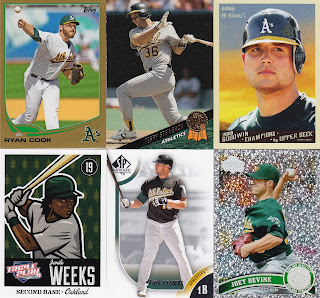 But there were a few that deserved extra special attention.  First up... a 1975 Topps Mini of Jim Holt:

I know what you're thinking... Who the heck is Jim Holt?  According to Wikipedia, he was a successful pinch hitter.  However he had a .271 batting average as a starter and hit .216 as a pinch hitter, so you can't always believe what you read on Wikipedia.

No label, no problem.  Anytime I can add a new Eck to my collection, there's no room for complaints.

Damn... I miss my boy Kurt.  I was bummed to see him get traded, but I think the move to Washington has helped his numbers.

A's fans are looking forward to another season with Cespedes in the lineup.  This guy can hit and hopefully he can lead them back to the postseason.


Last, but not least... there's this 1989 Baseball Card Magazine card of Terry Steinbach:

I'm a sucker for oddball issues... especially when they try to copy Topps vintage designs.

Thanks Greg for the awesome pack of A's cards.  I promise to give these cards a nice home.