When:  Saturday, March 9th
Where:  Ohlone Flea Market
What:  A Boxing Magazine, Some Cups, & Pokemon Cards
How Much:  $10

It took me a few years, but I finally made it out to the Ohlone Flea Market.  Several people recommended this flea market, because there was cardboard treasure to be found.  My informants were correct, however the vendors were asking way too much for this bargain hunter.

Purchase #1:  1971 The Fight of the Century Commemorative Magazine $5 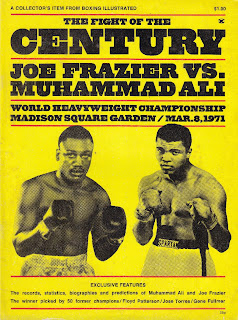 The third vendor I walked up to had bins and tables full of antiques.  One table had several boxes filled with older magazines, including a very cool 1974 ALCS Oakland A's program and several cool boxing magazines.  We couldn't agree on a price for the program, but I felt that $5 was a fair price for a magazine featuring Ali and Frazier.  I'm not really a boxing fan, but this was too cool to pass up. 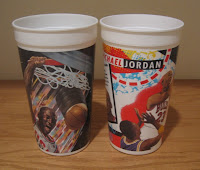 I'm a sucker for items I collected when I was younger.  When I was in college, there was a shelf in my bedroom dedicated to my "almost" complete set of Olympic Dream Team cups.  Today, they're all tucked away in a box sitting in my parents' garage.

Do I really need these?  Probably not.  I guess I was just caught up in the moment and figured two bucks was a reasonable price for some cups I'll never drink out of.  Oh well... at the very least, they'll make excellent pencils cups in my classroom.

Another example of me living in the past.  No, I never collected Pokemon cards.  But when I started teaching, I worked evenings at a card shop and 90% of their sales was Pokemon cards.

A lady had these on her table and as I looked them over, she offered them all to me for $5.  I countered with $3 and she accepted.  Again... do I really need these?  Probably not.  But I'm sure some one of my summer school students will appreciate them.

Well... that's it.  A 30 minute drive, $8 in gas, and $2 for parking.  And what did I walk away with?  Pokemon cards and used plastic cups.  At least I'll have some interesting reading material for my next few trips to the bathroom.

Did you ever watch The Fight of the Century, collect McDonald's 1992 Dream Team cups, or play Pokemon cards?

nope, too young, too indifferent, too old.

I had several of the McDonald's 1992 Dream Team cups back int he day. I think I still have the Jordan somewhere. I wish they would do more of that sort of stuff now. Sports stuff used to be everywhere; McDonald's, Denny's, Capt'n Crunch, Nabisco, etc.

I had the Dream Team Cups, those bring back memories! I also had the Icee Cups in Baseball!

Pokemon!! I have a bunch of those cards laying around!

1. Too young but I have seen it on video multiple times. All three of thier fights were absoulutly brutal.

2. Yes, I worked at McDonalds at the time so I had them all.

Yes, I did indeed watch the Fight of the Century. On closed circuit TV at the old Garden Oaks theater in Houston. I went with a couple of friends. I was the only one rooting for Ali. I was (and remain) a huge fan of his. Spectacular fight, really a war. I still don't know how Ali survived that last round. Frazier had been rocking him late in the fight. He made it to the end on sheer guts.

btw.... I couldn't name a single current fighter in any weight class. Boxing is dead.

No to the McDonalds cups, never seen them until now. And my two sons were Pokemon guys. they had the cards. I took them to one of the movies once and I thought I was going to have seizures from the flashing lights and spastic movements. LOL

I know an elementary teacher that says he still sees them in the classroom. He had a huge stash once upon a time, all taken from kids.

2. I was 4 years old, I think I was aware of Jordan at that point in my life.

3. Yes, on the playground at school. My then best bud had one deck that we split in half to play.
It was a few years later that the bite I got from the tcg/ccg bug really took hold and I started playing any and every game I could find.

Remember the cups from when I was younger but never had any, very cool.
Poster makes me wish that boxing could return to the grand event it once was, but not likely with lack of major stars and the rise MMA

collected Pokemon, still have 'em and would love to sell 'em. sold a 1st Edition Charizard for $60 waaaaaay back when.

I used to drink out of Dream Team cups as a kid. That is a great purchase.

I was a big Pokemon fan, and collected and played the card game with my brothers!

I couldnt watch it live,back then it was on a thing called Closed Circuit,and you had to go to an aditorium for a big fee to see it. I was 10 years old, 5th grade,I bet some kid a quarter on Frazier,and he actually paid me when Smoking Joe won. Joe Frazier RIP.

i was too young to ever see an Ali fight...unfortunately
didn't collect those type of cups, but i do have cups from various football games i've been too...unfortunately most of them are cowboy cups...sad face.
was never in to the whole pokeman phenomenon, but i get it.

I watched all of the great Ali fights of the 70's. It was great!

They had Icee cups with baseball players? I'd love to find a few of these.

Interesting to hear that most people were pulling for Frazier. Knowing how popular Ali is today, I would have figured it was the other way around.

I have a decent size stack of Yu-Gi-Oh cards that I confiscated last summer from a 5th grader. I'm hoping he comes back this year to pick them up.

I know what fight you're talking about. I saw a documentary on it. The guy's name was Max something.

Definitely no to the first and third question (although the magazine is a pretty good find). I may have gotten a couple of the cups, I don't remember now, but if I had a Jordan cup, I would have kept that one at least.

Yeah... the guy had most of the Dream Team cups and two or three of the 1993 versions, but I was only interested in the Jordans.

I definitely collected Dream Team cups. I remember getting Ewing a lot.

Love those McDonald's Dream Team Cups. I'm looking for a Patrick Ewing for my PC.

I'm sure they're pretty cheap once you find one... the only problem is finding them. There are probably a bunch on eBay... but the shipping might be a few bucks. Good luck on your hunt.