I recently received two packages in the mail containing contest prizes.  The first one was from The Card Hobbyist, who informed me that I won another contest.  That's the second time in three months.

My prize package included three packs of baseball cards and one pack of 2011 Score football. 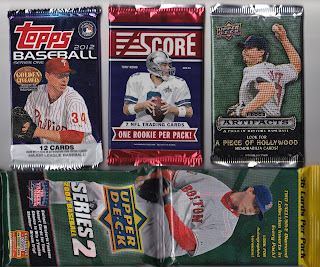 Here are the highlights from the four packs:

I didn't end up pulling any A's, Padres, Seahawks, or Packers... but I pulled a Ripken card for my insert binder and a Matsui for my Japanese athlete binder.

Patrick... thanks for the packs.  I had a blast busting them open. 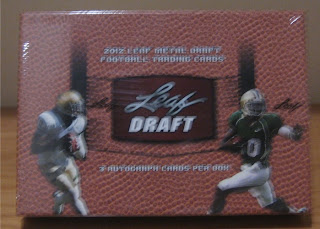 Next up was a box of 2012 Leaf Draft Football sent from Cardboard Connection Radio.  If you're not familiar with these guys, they run an awesome podcast that you can download off of iTunes.

Each box contains three autographs.  I ended up with...

Nick Perry is going straight into my Green Bay Packers collection.  I'm hoping he'll be able to help their defense turn things around after back to back disappointing seasons.

I've never heard of Hopper, but he plays for the Clemson Tigers and was last week's ACC Rookie of the Week.  I'm going to tuck this card away and see if he ends up getting drafted by one of my teams. 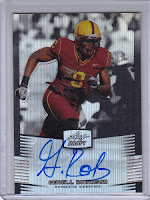 And the final card was Gerell Robinson.  From what I've read, he was drafted by the Denver Broncos.  But I have no idea if he's on their active roster.  I'll be adding this to my trade bait as soon as I find the time to update my lists.

If you're into contests, Cardboard Connection Radio is always giving away stuff.  Right now they're having their 5-Year Anniversary contest.  What are you waiting for?

Thanks you guys.  I truly had a blast busting these products.