What's the longest you've ever sat on a post?  Well... this post was written and published back in September last year.  That's when I was trying to clear out my card show haul box... which was filled three months prior to that on June 26th, 2021.
That's when I found this 2002 eTopps card of Shawn Green sitting in a dealer's 5 for $1 bin at the Bay Area Sports Cards & Collectibles Expo: 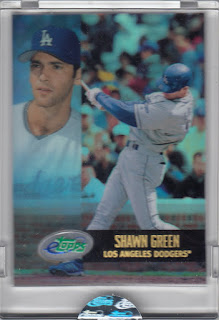 2002 eTopps #24
For those who aren't familiar with eTopps cards, they were the 2000's version of the online exclusive cards Topps floods the hobby with today (or at least back in September of last year). 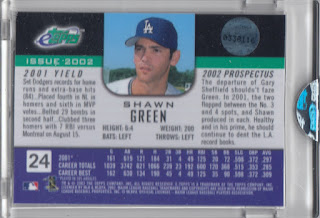 Collectors could purchase cards from the eTopps website and have Topps store them until they were ready to have them shipped.  In the meantime, the collector could add the card(s) to their online portfolio and trade them with other collectors like stocks. 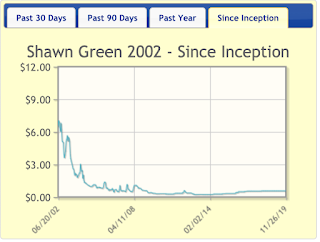 Based on their website, I'm pretty sure the IPO (initial player offering) took place back on 06/20/02 with a price around $7.  According to production numbers... 4,438 copies were created and sold.  Since this is a weird number, I'm guessing these were made to order (like Topps Now).
What's not weird was the timing of the release.  Less than a month earlier on May 23rd, 2002... Green set MLB record for total bases in a game when he smacked four home runs, a double, and a single against the Milwaukee Brewers in an afternoon game at Miller Park.
Here's a breakdown of his six at-bats:
At the end of the day, he was 6 for 6 at the plate with 6 runs and 7 runs batted in as the Dodgers spanked the Brewers 16 to 3.
And since I'm so invested in this post... here's a deeper look at Mr. Green and the impact of this monstrous game on his season...
This had been the 46th game of the season for Green.  He entered it with a .238 average and 5 home runs.  He exited it hitting .265 and 9 home runs.  That game also kicked off an impressive hot streak where he hit four more home runs with a .444 batting average over the next four games.  It also turned his entire season around as he would never hit below .265 again that season.
Getting back to the card itself... I don't make a habit of picking up eTopps cards.  The holders make storing them bulky... unless you of course bust them out and set them free.  However for 20¢, I just couldn't pass this card up.  And I just couldn't pass up the opportunity to write a post about it... even if I had to wait eight months to publish it.
Happy 20th Anniversary Mr. Green!  That was one monstrous day on the green.  It'll be interesting to see how long this MLB record will stand... and who will break it.
Happy Monday and sayonara!
Posted by Fuji at 9:00 AM

that's a great deal on a sealed etopps card! i can confirm that these cards had a limited IPO window, with a max number of cards that would be made. some, like this green, didn't hit that cap. i bought a few cards this way, including a lebron rookie that i wish i still had!

as for green's performance, you might recall i've posted about being at that game a few times. i am still waiting for topps to use it for their turn back the clock on demand set - today they used rickey instead, which is ok too.

Not fair, you fooled this BoSox fan with a misleading, click-bait title! With that said, I'm sure a certain fellow blogger will be happy to see this post. For the card itself, I'd be busting it out of its case. Outside of the value not changing one iota, keeping a card in a prison like this is unfathomable.

Thought this would be about cards that feature the big wall at Fenway. A more interesting topic than Shawn.

I have bunch of eTopps cards hand delivered such as The Rock, Martin Brodeur to name a few. I need to get the few remaining ones off my "portfolio" account.

Very proud moment for Dodger fans. I have this card, one of the few etopps cards I own. None are encased.

Last I checked, I think I still have drafts of posts/post ideas from 5-6 years ago(!). Need to either write those or accept the fact that I'll never get around to them.

Didn't care at all about eTopps when it was actually going, but I like picking up cheap copies these days. Always break them out of the case, though!

Haven't sat on a post, but I've started MANY posts that I simply couldn't finish up, for whatever reason(s).
Those e cards were well before I understood the Internet.

Last fall I had heard that Tsuyoshi Wada had retired so I did a retirement post for him - only to find out that my source for the news was in error and Wada was going to keep playing. I unpublished the post and it's now sitting in limbo until it's needed. So I guess the answer on the longest I've sat on a post is going to depend on how much longer Wada's going to keep pitching.

How long until we see such a value drop in Gem mint 10 no-name cards from all the different graders after the "great crash" and mass exodus of Flipper Bros from the hobby?

eTopps Autographs with COA's are glorious! I collect eTopps of a wide variety and find the overall design of the majority as well as the card stock and presentation to be ahead of its' time. Compared to some of present day online exclusives if find eTopps to be superior in many ways. Topps Vault is another underappreciated treasure trove.

As a fan of refractors, I'm definitely into eTopps (pretty sure all eTopps cards are refractors, right?). And while some don't like them, I think the "uncirculated" cases are a fancy touch. (Just make sure to keep them in individual team bags, as they easily scuff and scratch.)

I've got lots of abandoned posts-- once in a blue moon I might revive/finish one, but really I should clear out my old drafts at this point. Pretty sure there's been a handful of times I've finished a post and sat on it for a few days/weeks to sync up to a special date. And I've done "time capsule" posts where I'll schedule a post a year out or something just for the hell of it. I've got a huge post in the works now that's scheduled to be published in 2024. Mark your calendars! LOL

I like the idea of eTopps. Didn’t most of them cost more to ship out to the buyers than the cards were worth? I heard a lot of them never got shipped out because of that. Cool post. I think I have one draft post that has been in my queue for a while.

If memory serves; Topps raised the shipping to like $15 per card without allowing combined shipping.