My friend had surgery last Wednesday so I took a half-day and picked her up.
They were running a little behind, so I had an extra hour to kill.  As luck would have it, there was a card shop located a few miles away.  So I headed over there to pick up some storage boxes.  I was very fortunate to hit up the local distributor and stock up on different supplies right before the pandemic hit.  In fact, I have enough top loaders and plastic slider boxes to last for years.  Sadly they had just started selling cardboard boxes in bulk lots only.  At the time...  it wasn't too big of a deal, because my LCS always had them at a reasonable price.
But I made the mistake of waiting until I actually needed some to grab some.  This is what I discovered... Now I'm not sure exactly what that price was in 2019... but I know for a fact that I didn't pay $1.75 for a 200ct. box.  Holy cow!  The bargain hunter in me sobbed when I saw this sign, while the collector who waited until the last minute to buy storage boxes was annoyed.
Some collectors probably would have walked out and figured another way to store their cards.  Unfortunately, my OCD requires sets destined for my personal collection to be housed in brand new boxes.  So I picked out twenty (a variety of sizes), but avoided the 200 and 300 count boxes.  Figured there was no way I could justify spending $1.60 for boxes this small.
Card supply prices are ridiculous, but it's not the card shop's fault.  That's why I figured I'd support them and buy some actual cards.  The best bargain I could find was this...

Play at the plate with the Kid in a Dodgers uniform sets the tone for about half of this box, because there was a nice stack of Junk Wax Era cards.  Not surprised, but not displeased either.
#9:  1990 Donruss #390

Love him or hate him, Belle was a beast.  It's not worth anything, but I'll happily add another one of his rookie cards to my collection.
#8:  2018 Topps Home Run Challenge #HRC-KB

I never pulled any of these in time to actually participate in the challenge, but kudos to Topps for inspiring collectors to interact with the game.
#7:  1989 Score #322

Did you really think I wasn't going to include at least one well-cropped action shot to this list?  Plus... check out that unibrow on the back.  The back is also proof that Score had some of the best card backs in the late 80's.
#6:  2018 Topps #183

Here's your random baseball card fact of the day.  Cecil Fielder launched eleven grand slams during his career and Tony Phillips was on base for seven of them.
#4:  1990 Topps #210

This card was a very pleasant surprise.  The guy at the LCS warned me that this box was filled with commons.  He wasn't wrong.  On the other hand, there were a few hall of famers tossed into the box like this Sandberg, which is the latest addition to my Topps Base Card Run Project.
#3:  1988 Fleer #518

As an A's fan, I should hate this card.  Hershiser dominated them in the World Series and took home the MVP Award.  I did a quick COMC search for 1988 Orel Hershiser cards and discovered card companies hooked him up that year.  But I still think this card is one of the best looking.  It's almost like Fleer knew the Dodgers were going to win it all, so they dedicated the set's colors to them.
#2:  2018 Topps #68

If this photograph of Hamilton doesn't do anything for you, then you and I have very different tastes in cards.
#1:  2017 Panini Donruss #190

How much do I enjoy collecting Tony Gwynn cards?  Well... I chose this Panini logo-less card as my favorite card in this mystery box.
So there you have a $9 LCS mystery card box.  What do you think?  Worth the price?
Personally, I was satisfied with the purchase.  After sorting the box, I pulled forty-three cards for my collection... which comes down to about 21¢ each.  Only a handful of those cards are worth that much, but after you factor in the entertainment value... I don't have any regrets.
Plus there's the storage box...

Due to the tape damage, my OCD prevents me from using this box for sets.  But that doesn't mean, I won't use it to transport cards to shows or something.
And don't forget... there were over 500 other cards that I'll offer up to people or take to my classroom for next year's Civil Rights Movement trading card project. 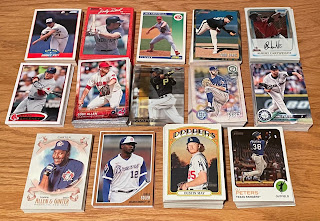 Great that you got a Tony Glynn card. I don't mind those zombie DonRuss cards from Panini. They look alright.

Score definitely a contender for best card backs in the 80s. Someone was tweeting quotes from Score backs recently because they often threw a bit of shade on players, especially if they were carrying some weight.

Agh my autocorrect changed Gwynn to Glynn. What a disaster!!!

That Ginter Carter is nice.

Great fact about Cecil Fielder that I didn't know. Those Grand Slam cards were fun to collect.

Supplies have gotten outrageous recently. Love the Joey Belle and Stan Javier cards. They did not have exit velocity back in the 1990s, but I saw Stan Javier home run back in the 1990s at Busch Stadium that hit the back wall of the Cardinals bullpen in right field on a line drive. There is not a video of it, but it was one of the best hit baseballs I have ever seen. The home run made me a bit of a closet Stan Javier fan.

I feel your pain about the difficulty of finding supplies at reasonable prices, its even harder in Japan. About half of my collection is in shoeboxes and other random containers since I dont want to spend serious money on 400 or 800 card boxes.

And with binders and pages I actually find myself scouring the Yahoo Auctions listings looking for card sets that someone had put into a binder that I want to buy not for the cards, but for the binder/pages because it might be cheaper that way!

I remember storage boxes from 200ct to 800 ct being under a dollar at the local comic shop, before the pandemic of course. And I totally understand your OCD requiring clean storage boxes. I'm especially picky about penny sleeves.

I can use any 2012 Topps cards you want to spare. If you've got more than a PWE worth I can send you a small mailer's worth of cards in trade.

It's fun to go through boxes like that every once in a while. I wonder how much your place would charge for a 5,000 count box?

So far I have enough excess boxes that I haven't had to buy any. Same with pages, but I still find them for 20¢ each at the antique shops. You might try them for boxes, often those dealers won't jack up their prices like a shop owner.
I've also still got a ton of extra binders, but it's so expensive to ship them. Anyone in the Maryland, PA or VA area hit me up if you'd like a few.

I recognize that store. Stevens Creek Sport Cards. I been there few times when I was vacationing in Bay Area