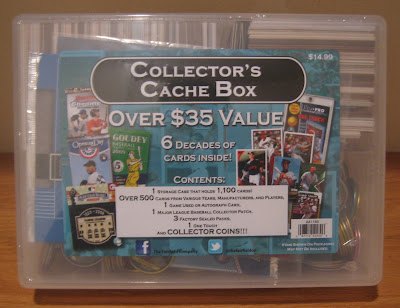 By now, I'm sure you've seen these Fairfield Collector's Cache Boxes busted either by Beckett's Chris Olds or our very own Spankee @ My Cardboard Mistress.  But just in case you haven't, here's a summary of what $14.99 will buy you:

Now I'm not the kind of guy who typically buys these repackaged products, but after seeing what Spankee pulled, I had to try my luck. 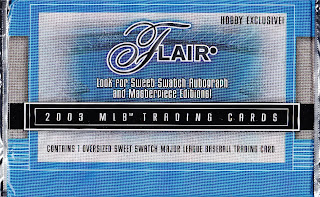 In certain boxes, Fairfield inserted 2003 Flair box toppers as their guaranteed game used or autographed card.  They're jumbo cards (approximately 5" x 7.75") and I have this strange infatuation with oversized cardboard.  Unfortunately, these boxes are not easy to track down in my area.  I went to five different Targets before I finally found a box with this special pack.

I'm pretty happy with what I pulled, but I'm going to be a tease and show off the other goodies I received first.

I don't have time to scan 500 cards, so I picked out my five favorites:

It's always nice to pull a new addition for my Tony Gwynn binder.  And I beat the odds and pulled an autographed Austin Kearns card #'d to 100.

They guarantee six decades worth of cards, which means you'll find a least one card from the 60's.

My box contained a 1967 Topps Rich Rollins.  There were also four cards from the 70's.  Bake McBride was the only guy I recognized.  Not exactly a vintage Mays or a Winfield rookie card, but there was still hope that I'd pull something cool out of the packs.

But before I get to those, here's my manufactured MLB Collector's Patch: 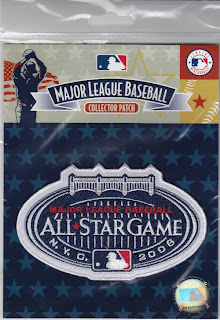 And a sampling of the 1990 Topps coins they included: 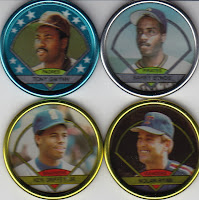 I ended up getting 40 of the 60 coins in the set.  If anyone decides to bust one of these boxes, email me and maybe we can help each other out.

Here are the three packs included in the box, along with the three best cards pulled from the packs: 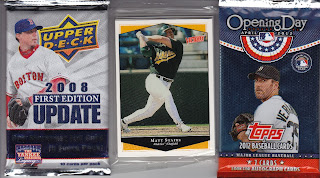 And finally, the number one reason, I picked up this $15 box.  Here's the hit from the 2003 Flair box topper pack: 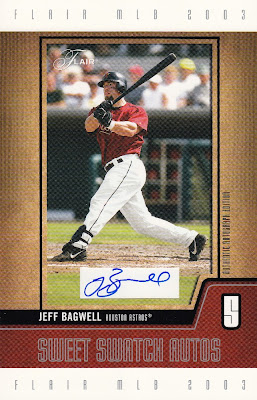 It's not exactly the Chipper Jones patch that Spankee pulled, but it's still pretty cool.  It's my first Bagwell autographed card, so I'm pretty happy about that.

Hopefully, I'll come across more of these Fairfield Collector's Cache Boxes.  If I do, I'll definitely pick them up.  Worst case scenario, maybe I'll at least finish my 1990 Topps coin set.

Since pulling the Bagwell, I've found three more of these Fairfield Collector's Cache Boxes with these Flair packs.  Here's what I pulled:

Overall... I'm happy with what I pulled.  I'm happy to add the Pedro and Jeter to my collection, so two out of three isn't too bad.
Posted by Fuji at 3:00 PM