A Night @ The Fights

On Saturday, I attended my first UFC event with my buddy and his daughter.  The tickets were free, courtesy of Dana White himself...

We had upper bowl seats, so I spent most of the night watching the fights on the big screen. 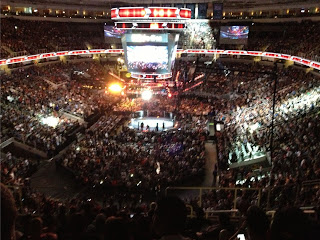 But, I'm not complaining.  The fight card was stacked and overall the fights were pretty exciting.  Well... except for the Cormier/Mir fight.  Cormier trains less than two miles away from my house at American Kickboxing Academy and I was hoping his UFC debut would be a little more entertaining.

Oh well... at least I had the opportunity to witness Benson Henderson propose to his girlfriend.

Email ThisBlogThis!Share to TwitterShare to FacebookShare to Pinterest
Labels: mma