Sometimes statistics don't paint the entire picture.  When you look at Arturs Irbe's statistics during his five seasons with the San Jose Sharks, you probably aren't too impressed.

But what his numbers don't show is just how much the fans embraced The Wall.  During his time in San Jose, Irbe's contributions on and off the ice made him one of the team's most popular players. 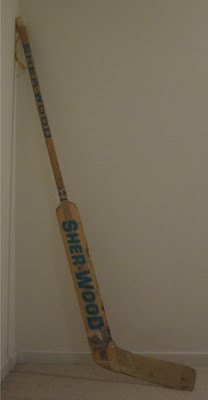 However thanks to my buddy, I'm now the proud owner of this awesome game used Irbe stick.  It should be able to hold me over until Upper Deck, Panini, and In The Game figure things out.

Awesome, right?  Here's a program insert from the 1993/94 season that shows Irbe with a similar stick: 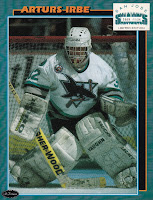 The only downside is this huge crack on the blade: 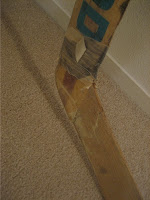 But I'm not complaining.  It's one of my coolest pieces in my San Jose Sharks PC.  Thanks Mike for this truly generous gift.

Alright, it's your turn to talk...

Who are some of your team's fan favorites?

In other words, players who aren't necessarily super stars, but get the super star treatment in their hometown.