Borrowing Ideas is Not a Crime

Way back in 1981, my parents bought me my very first complete set while we were on a trip to Seattle.  When I got home, I had so much fun sitting down on my family room floor... sorting and resorting that complete set.  I'd build fantasy line ups one day.  The next day, I'd pull out the sports section from the San Jose Mercury News and create lists for batting and pitching leaders.

1981 Fleer #381
In hindsight... that's probably why I liked Bill Madlock so much as a kid.  He was consistently had one of the highest batting averages during the strike-shortened MLB season.
Anyways... it'd be fun to have a Christmas Carol moment, travel back in time, and watch myself sort and resort that set.  I'd love to see all of the creative ways I sorted cards as a nine year old.
These days... I don't find different ways of sorting cards, but I do enjoy finding new and creative ways to collect cards.  Fellow bloggers are my number one source for these new ideas.
Back on January 2nd, 2010... Drews Cards: A Teenager's Journey Through The Card Collecting Universe showed his readers his collection of Sports Card Trifectas.  What's a trifecta?  Well it's where he'd pick up a rookie card, autograph, and memorabilia card for a specific player.  Considering I enjoy collecting all three of these things, I immediately fell in love with his idea.
Nearly twelve years later, I've put together thirty-nine different trifectas.  The latest involves one of the newest members of the National Baseball Hall of Fame:  Mr. Derek Jeter.  Let's check it out...
Rookie Card:  1993 Topps #98 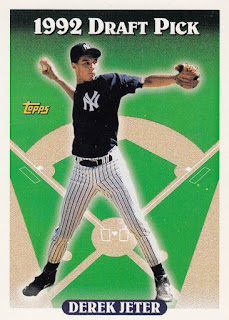 I have a few different Jeter rookie cards and enjoy all of them.  Ultimately, I went with this one because it's a nice looking card and collecting Topps flagship rookie cards have been a part of my collecting interest since the early 80's.
Memorabilia Card:  2003 Flair Sweet Swatch Jumbo Jersey #DJ-SSJ 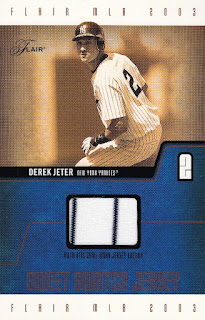 I'm pretty sure I only own two Jeter game-used memorabilia cards... and one of them uses the 1993 Topps card design.  That left this oversized card which I pulled out of a Fairfield Cache box back in 2013.  I remember scouring all of the Targets, Walmarts, and Toys "R" Us stores in my area searching for these boxes containing the 2003 Flair box topper packs.  It paid off for sure.
Autographed Card:  1997 Topps Rookie of the Year Autograph #NNO 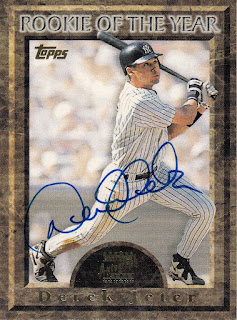 Normally my favorite autographed card gets the honor of being part of the player's trifecta.  Unfortunately... my favorite Jeter autograph is a Stadium Club Co-Signers card which he shares with Chipper Jones.  It doesn't seem right that he should have to share the spotlight with another guy, so I decided to go with this on-card autograph from the 90's.
Thank you Dean for sharing this idea on your blog!  I'm not sure if you're still collecting, but I wanted to let you know you have forever made an impact on my collection and it's much appreciated.
How about you?
Have you ever borrowed a collecting idea from a fellow blogger?
If so, share it down below.  Maybe I'll borrow it too.
Happy Thursday and sayonara!
Posted by Fuji at 3:00 PM