If you were following baseball or collecting baseball cards back in the late 80's... then you are probably aware of Jose Canseco becoming the first member of the 40/40 Club.

1989 Score #655
Donruss, Fleer, and Score knew Canseco was one of the hottest players in the hobby and each company capitalized on the historic event by producing tribute cards the following year.

1989 Topps #500
1989 Upper Deck #659
Topps and Upper Deck didn't honor him with tribute cards, but they did mention the accomplishments on card backs in 1989.
Card shops in my area had 50ct. lots of each of these singles sitting on the Jose Canseco shelves in their display cases and even casual fans were looking for something to commemorate the feat.  Since then... only three other MLB players have joined the club:  Barry Bonds (1996), Alex Rodriguez (1998), and Alfonso Soriano (2006).  It'll be interesting to see who the next member will be.  Ronald Acuña Jr. came close in 2019 (41HR/37SB) and definitely has the speed and power to make the club.  I also think guys like Fernando Tatis Jr. and Shohei Ohtani are potential candidates as well.
On the other hand, I doubt anyone will be joining the 70/70 Club anytime soon.  What's that you ask?  It's when a player steals 70 bases and drives in 70 runs.  Over the past century, only three guys have accomplished the feat. 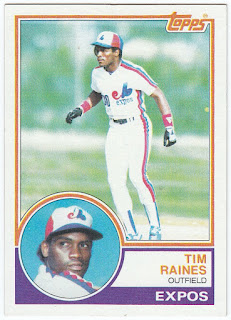 1983 Topps #595
Today is the 38th anniversary of Tim Raines becoming a member of this very exclusive club.  On September 27th, 1983... he cranked a three run home run in top of the 1st inning off of John Stuper which drove in his 68th, 69th, and 70th runs of the season.  The home run made him the first MLB player since Ty Cobb to have 70 RBI's and 70 stolen bases in the same season.  He stole his 70th base a few weeks earlier on September 11th against the New York Mets and finished the season with 71 runs batted in and 90 stolen bases. 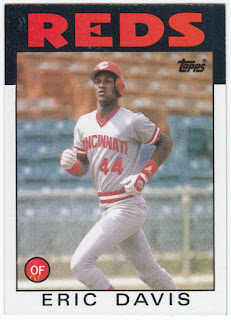 1984 Fleer #631 & #632
Anyways... getting back to Raines and the anniversary of his accomplishment.  I was happy to discover that Fleer sort of gave him a tribute card.  He was included in their Super Star Special subset... which mentioned the feat on the back. 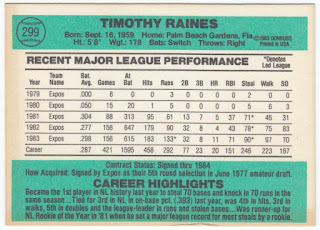 1984 Donruss #299
Donruss also mentioned his accomplishment on the back of his 1984 base card. 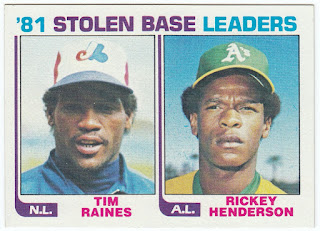 1982 Topps #164
Happy anniversary Mr. Raines!  You, Rickey, and Eric are in a very elite club.  One that hasn't had any new members in thirty-five years and probably won't have any in the very near future.
Happy Monday and sayonara!
Posted by Fuji at 9:00 AM