The year I was born... Topps released their flagship baseball card set to kids and collectors in six different series.  The sixth and final series... often referred to as the high numbers... can be challenging to track down and tend to be more scarce than the first five series.
I had heard about the dreaded high numbers back in the early 90's when I worked at my local card shop, but was reminded first hand back in 2013 when I attempted to build the 1972 Topps Oakland A's team set.  There was no way I was going to pay $5 to $10 for commons and minor stars... so the idea of building my birth year set for my favorite team was immediately shelved.
It also killed any hope of me attempted to build the entire 1972 Topps baseball card set from scratch.  On a positive note it motivated me to purchase a complete set off of eBay that very year for a fraction of the price they are selling for today.
As for the team set... I eventually completed it with help from Wes over at Area 40 (formerly known as Jay Barker Fan's Junk).  He sent me these six high number cards approximately nine months after I purchased the complete set:

1972 Topps #735, 753, and 780
Last week or the week before, I stumbled across a comic book in my office which I purchased for my Birthday PC, because it was released the same month I was born.  That made me wonder whether or not these 1972 high numbers were released back in September of 1972.
I couldn't find an exact release date, so if you know... feel free to comment down below.
According to TCDB, collectors were able to get them late that summer.  That means it's possible the 1972 Topps high numbers were in stores the day I was born... just like this Dr. Strange comic book: 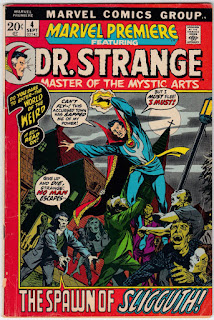 Marvel Premiere #4 (featuring Dr. Strange)
The discovery of this comic book in my office is strange, because I have zero records of purchasing it.  I'm pretty good about keeping emails for every eBay purchase I've made over the past ten-plus years.  Oh well... it's a nice addition to my Birthday PC... which contains these three other comic books released in September of 1972:

The Invincible Iron Man #50
Avengers #103
Archie #221
I'm slowly adding the different Marvel comic books released during my birth month.  It's not something I actively hunt for, but I try to add one each year for my birthday.
What about you?
Do you collect anything related to your birthday?
I'm pretty sure there's at least one other blogger out there who collects comic books from their birth month, but I can't remember who it is.  Anyone know?
Happy National Comic Book Day and sayonara!
Posted by Fuji at 4:00 PM