Donruss puzzles have been a part of my life since the early 80's.  I don't remember opening a ton of 1982 or 1983 Donruss packs, so I doubt I was trying to build complete puzzles of Babe Ruth or Ty Cobb.  But by the middle of the decade, I'm sure I was coming pretty darn close.  And there's not a doubt in my mind that I put together a Roberto Clemente puzzle in 1987. 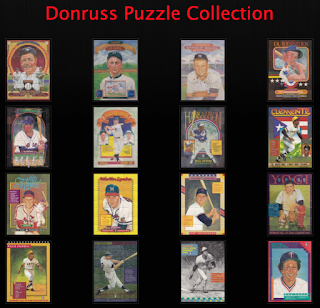 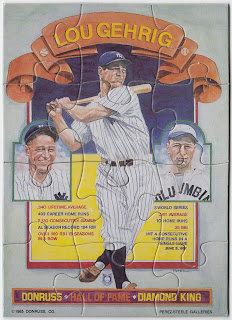 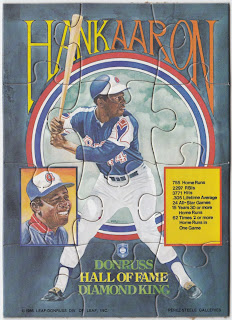 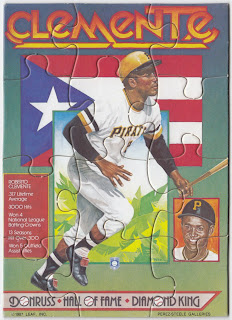 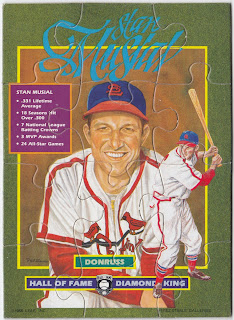 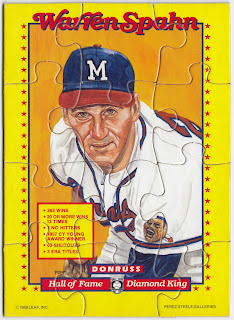 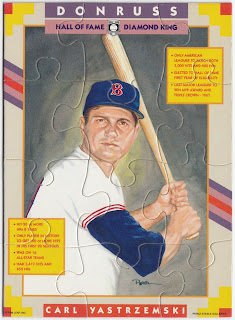 At first glance, you might think these are the standard size puzzles that came in The Rookies boxed sets, but these are much larger (approximately 5"x7") and contain only 12 pieces.
Here's a side by side comparison of the two Hank Aaron puzzles: 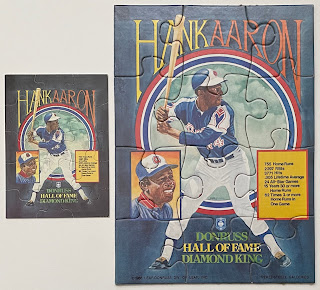 Both puzzles feature blank backs... but the larger puzzle utilizes much darker cardboard:

Thankfully... you can find information on just about anything on the internet.  After a few clicks on the keyboard, I discovered that these jumbo puzzles were included with the Donruss Super DK sets from 1985 to 1990.  Donruss produced these wrapper mail-in order sets from 1985 to 1991, but I didn't find any information on a Willie Stargell super-sized puzzle online... so I think these are the only six puzzles to collect.
***Donruss also produced a 1992 Super DK set which is extremely rare.  Based on this post it wasn't released to the general public, so I'm guessing they didn't produced a super-sized puzzle for Carew.
Well there you have it... another puzzling baseball card mystery has been solved.
Were any of you familiar with these Super DK puzzles?
I'm pretty happy that I discovered these, learned something new, and added them to my Donruss Puzzle PC for only $1.20.  Just like the 1998 Topps Super Chromes I showed off a few months ago, these puzzles were in a vendor's 5 for $1 box.
Stay tuned.  I still have several more purchases from this card show that I need to write about.  Until then...
Happy Tuesday and sayonara!
Posted by Fuji at 3:00 PM