Yup.  Late to the party as usual.  Actually outside of blogging, I'm actually one of those people who have to be on time.  But when it comes to this blog, I've been writing most of my posts on the weekends and scheduling them in advance.  Lately my focus has been on writing posts involving purchases made over the summer and care packages from Reader X which resulted in me completely dropping the ball on this year's Hall of Fame Class.
Thankfully... there have been a boatload of posts showing off cards of Derek Jeter, Ted Simmons, Larry Walker, and Marvin Miller.
I'm not sure if I own a card of Miller.  I looked to see if I owned his 2015 Heritage News Flashbacks insert, but came up short.  Even if I had found one sitting in my insert box, it would have been five days after Night Owl showed it off on his blog.
I also searched for the 1994 Upper Deck Ken Burns Baseball: The American Epic set, because he has a card in it and struck out.  I would have only been three days behind Diamond Jesters for that card.

1992 Rookie Phenoms #NNO
There's been a ton of Derek Jeter posts... and rightfully so.  He was one of the best shortstops of his generation... even if Nomar at his peak was better.  I've always had sort of a love/hate relationship with the guy.  At the start of his career, I actively rooted against him based on the team he played for.  But over time, I learned to appreciate his approach and contributions to the game and his career accomplishments while being loyal to one franchise.
Although I don't go out of my way to collect all of his cards, I do hold onto singles that catch my eye.  Tonight, I'll share five cards from five categories that I dug out from my binders...
#1 (Variation):  2007 Topps #40

I remember this card being in hobby headlines right around the time I returned from my seven year hobby hiatus.  It's no longer in the limelight, but it's still a cool reminder of Topps and their Photoshop shenanigans.

I pulled out a few Jeter inserts from my binder, but I ultimately went with this one because it was the most unique.  I wasn't the biggest fan of Pacific baseball cards back in the 90's and early 2000's... but this card is a perfect example of an era when card companies made an effort to think outside the box.
#3 (Parallel):  1997 Bowman Chrome International #1

Even before I opened the binder, I figured I'd use a refractor for this category.  Then I saw this card and knew I had to go with it on this day of remembrance.
#4 (Oddball):  1997 Pinnacle Denny's #14

I ran out of ideas for categories and decided to go with this underwhelming piece of cardboard and patch.  But if you look hard enough, you can find something beautiful in any baseball card out there.  For me... this card and it's rounded corners are the perfect candidate for my Damaged Card PC.
In a few days... I'll show off my Derek Jeter Sports Card Trifecta.  Yeah, I know some of you aren't into autographs and memorabilia cards.  But I'm one of those collectors who still collects them.
In the meantime, here are a pair of autographed rookie cards of the other two ballplayers that entered Cooperstown with The Kid from Kalamazoo... 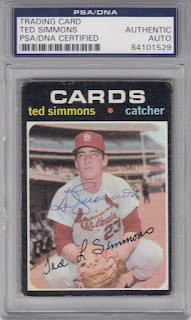 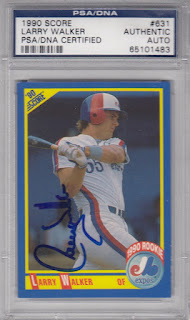