The More Recognition, the Better

Last December, MLB finally recognized Negro League players as Major League players.  It was obviously long overdue, but better late than never.
There have been several Negro League baseball card sets produced over the years... two of which I have added to my collection within the past thirteen months.  The first one was purchased over at the Negro League History website back in August of 2020.  Due to the size of the set (184 cards), I have no idea if or when I will review it.  The good news is there are at least two blogs out there that have.  I first saw the set over at Waiting 'til Next Year....  I encourage you to head over to Tom's blog and read his review.  He did a great job on it.  I also saw this set over at A Cracked Bat.  Julie was the one who inspired me to run out and spend the $59.95 (+ $10 shipping) and I'm so happy with the purchase.
Then back in July of this year, I noticed that Gio over at When Topps Had Balls designed a Negro League baseball card set of his own.  This one was less than half the price and much smaller in size (26 cards), which makes it much easier to showcase on my blog.
Now I'm not really an expert on Negro Leaguers, so I'll keep my commentary to a minimum and let the scans do the talking.
The set came in a very attractive foldable package that features a 44¢ USPS stamp of Rube Foster and a custom WTHBALLS stamp of Ted Radcliffe: He produced a total of 80 sets and as you can see mine was numbered 046.  When you flip the package over, you see a Negro League Legends stamp along with a WTHBALLS sticker used to seal the set. 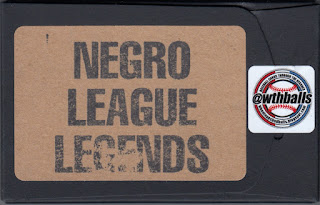 Here's what the set looks like when you open the flap: 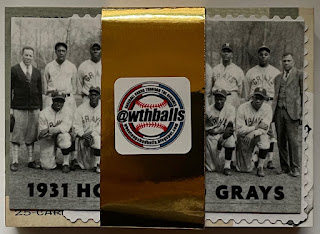 The set was wrapped with a strip of gold foil paper and another WTHBALLS sticker.  On top you can see the two bonus items that were included with the set.  I'll show them letter on in the post.
The first card in the set is the header card: 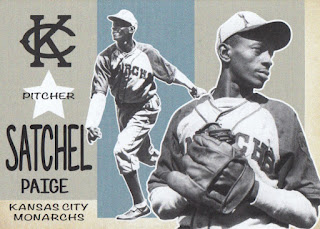 2021 WTHBALLS Negro League Legends #26
The set design is simple, yet attractive.  I like the use of pastel colors, dual images, and the inclusion of the Negro League team logos. 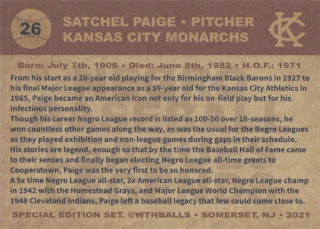 Although the card backs are missing the player's stats, Gio did a great job of writing a detail summary of the player's accomplishments.  I also like the inclusion of the year the player was inducted into the Baseball Hall of Fame.  Out of the twenty-five players listed in the set, twenty-three have a plaque hanging up in Cooperstown.
If you want to find out the two who aren't, look for yourself:

Scans are too small to read?  Okay.  The two non-hall of famers are Dick Lundy and Ted Radcliffe.
Gio also included two bonus items.  The first honors one of the greatest teams of all-time... the 1931 Homestead Grays: 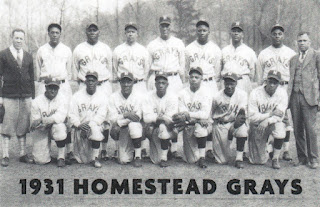 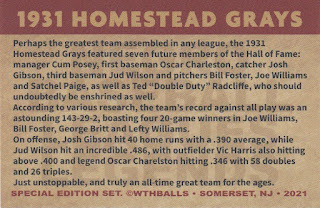 According to the card back this team featured seven future hall of famers.  I was curious to see if any MLB team had more and it looks like the 1928 and 1931 to 1933 New York Yankees had nine future hall of famers on their rosters.  As for having four 20-game winners, only two MLB teams have accomplished that feat:  1920 Chicago White Sox and the 1971 Baltimore Orioles.
So yeah... I'd say the 1931 Homestead Grays were pretty special.
The final item was actually the key to this set purchase: 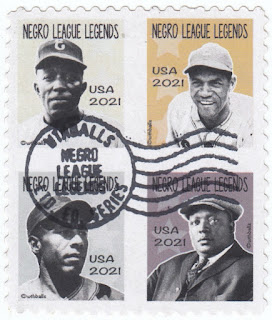 When I saw these four stamp panels on his blog, I was sold.  I headed over to PayPal and immediately sent him $25.  I guess you could say these stamps sealed the deal.
My panel contained the following players:  Leon Day (upper left), Willie Wells (upper right), Ray Dandridge (bottom left), and Rube Foster (bottom right).
I realize this set isn't for everyone.  However if you're interested in collecting cards of Negro League players, I'd recommend it.  The $25 (free shipping) price tag might scare some of you away, but I figured it's just a few more dollars than a blaster at Target, but way more limited.  Plus you would be supporting a custom card blogger.
Feel free to leave your thoughts on the set's design and checklist down below.
Happy Sunday and sayonara!
Posted by Fuji at 10:30 AM