Yesterday was Back to School Night... which was held online due to Covid.  Don't worry.  We're not doing distance learning.  I'm still back in my classroom standing in front of warm blooded 7th graders and loving it.
Yesterday was also the first treat day.  What's treat day?  Well it's a once a month deal where one department is responsible for providing treats for the staff.  Yesterday's treat day theme was Brown Bag Lunches.  Staff grabbed a brown bag and filled them up with individually wrapped items like Smucker's sandwiches, Lay's potato chips, Quaker granola bars, Welch's fruit snacks, and Capri Suns.
I thought it was a very creative idea... considering most of the staff isn't currently eating lunch in the staff lounge and probably wouldn't enjoy the usual buffet style lunch while in the midst of a pandemic.
It also reminded me of when my mom used to pack me a lunch when I was a kid.  I was more of a lunch pail kid, but every now and then, I'd get my lunch packed in a brown bag.  As for the contents... it'd usually include a sandwich, a bag of chips, a fruit or pudding cup, and a Thermos filled with Kool-Aid or milk.  And when life was really good... Mama Fuji would toss a Hostess treat into the lunch pail or brown bag.
Life was really good back on June 26th of this year.  That day my buddy and I attended the Bay Area Sports Cards & Collectibles Expo in Fairfield, California... which was the greatest card shows I've attended since the 90's.  If interested, you can read more about it here.
To make a long story short... I spent three hours standing around one guy's booth... digging through his 8 for $1, 5 for $1, and 10 for $4 boxes.  There was a ton of cool stuff I purchased from him... but by far the highlight of the haul were these eight 1979 Hostess panels I found sitting in his 5 for $1 boxes: 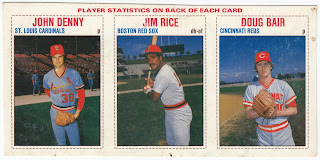 1979 Hostess Panel #1-3
The first panel features our first hall of famer as well as a nice Oakland Coliseum cameo.

1979 Hostess Panel #4-6
If you don't look at the bottom half of each card... you might think all three cards in this panel were photographed on the same day at the same place.  Clear blue skies.

1979 Hostess Panel #7-9
This is arguably the best panel in the lot.  Mike Schmidt is the biggest name and Garvey is fan favorite among many of us. 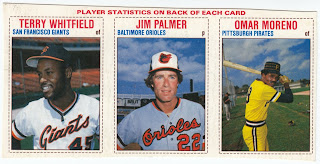 1979 Hostess Panel #10-12
I'm gonna guess that Whitfield was photographed at Candlestick Park... which would mean Denny (Panel #1-3) was too.  Palmer is the third hall of famer in the lot and Moreno is wearing the first pillbox cap. 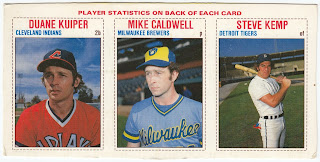 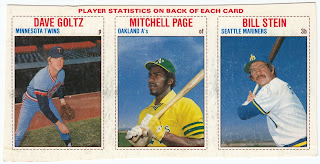 1979 Hostess Panel #16-18
This panel contains the lone Oakland Athletic in the lot.  And if you're not familiar with Mitchell Page... he's the guy who was arguably robbed by Eddie Murray back in 1978. 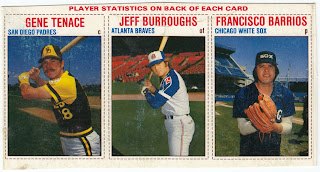 1979 Hostess Panel #19-21
And this panel contains the lone San Diego Padre in the lot.  Tenace was also a key part of those Swingin' A's teams from earlier in the decade.

1979 Hostess Panel #22-24
The Kid is the key to this panel.  He's the fourth and final hall of famer in this lot of Hostess panels.  And that smile on his face is probably very similar to the one on my face when I found this stack of panels sitting in this guy's box.
Although these were the highlight to that card show haul, I still have a few more cards I'll show off in future posts.  One of them is scheduled to be published in May of 2022... which is the longest I've ever sat on a post in the history of this blog.  Stay tuned.
Happy Thursday and sayonara!
Posted by Fuji at 3:00 PM