On one of my trips down to Las Vegas to visit my parents, I noticed that the upright freezer in their garage was gone.  That freezer had been a part of our family since the late 70's and stored everything from TV dinners to Costco hash browns to neapolitan ice cream sandwiches.   When I close my eyes, I can still picture the brownish red color on the outside and the rows of frozen orange juice lining the door.

It was a piece of my childhood that lasted close to four decades.

The saying "they don't make them like they used to" definitely applies to that freezer.  And after closely monitoring the hobby the past few years, I feel that it starting to apply to baseball cards as well.

Back in the 90's, card companies fought it out.  Sure these companies flooded our hobby with enough cards to last a lifetime, but at least the competition inspired innovation and creativity.

Companies started using foil, acetate, vegetable oil, wood, thermochromic paper, and metal in their cards, instead of the same brown, white, or gray card stock.  Card company ingenuity had reached its peak and it was it was truly a great time to be a card collector.

Today's post features one of our hobby's hidden treasures.  I'm not talking monetary value.  You can probably pick up an entire set for less than 25% of its original cost.

These 1995 Topps Legends of the 60's Medallions are a forgotten oddball issue that deserve more attention.  Each card in this set is made out of a solid chunk of bronze and are super beefy.  Imagine the Topps Traded Bronze Premiums on steroids.  If baseball cards were sorted into weight classes, than these would be heavyweights.

Unfortunately these cards were so thick and heavy, Topps couldn't put these into packs, so they were exclusively offered to Stadium Club members.  Each month a new card was released and members could buy if for $39.95. 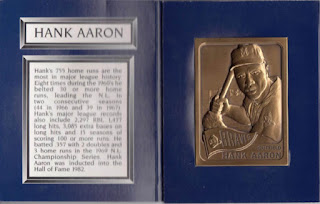 Even though they're beautiful and came inside of a fancy booklet with a brief biography of the featured player, I can't imagine too many collectors would be willing to spend that kind of money. 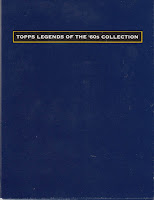 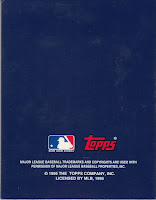 That probably explains why it's easier to find cards of Mays and Clemente these days compared to Marichal and Killebrew.

Speaking of Marichal and Killebrew, here's a look at the set in its entirety...

Surprise.  Surprise.  The twelve card checklist was comprised of baseball legends of the 60's and replicas of one of their 1960's Topps baseball cards.

I wasn't able to figure out how or why the people at Topps chose the specific year and card design for each player, but eight of the ten card designs from the 60's were represented.  Only 1960 and 1963 Topps were left out.

As for the checklist itself, the San Francisco Giants have the honor of having the most players in the set.  Funny thing is... they only made it to the World Series once and didn't win.  The New York Yankees went five times and brought home two titles, yet none of their players made the checklist.

I think two of the biggest exclusions are Pete Rose and Sandy Koufax.  It's understandable why Rose was left out, but Koufax is one of the biggest names in our hobby.  It would have been nice to see him enshrined in bronze.

Did Topps nail this checklist?
Or would you make any substitutions?


Well that's all have for today.  I know that bulky, heavy bronze medallions aren't for everyone... and don't get the wrong idea... I still enjoy opening up blasters of Stadium Club.


But since I haven't been able to get my hands on any, I figured I'd switch gears and flashback to the Bronze Age of Baseball Cards.