Cards don't need to be autographed, contain a swatch of an athlete's jersey, or be worth a lot of money to be cool.  Sometimes they just need to feature a favorite athlete, have a cool design, or nice photography.  In my humble opinion, this Rickey Henderson insert from the early 90's happens to meet all three of these criteria: 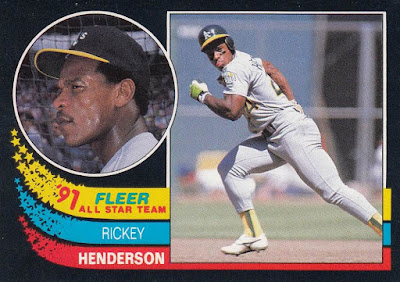 Almost everyone who reads this blog knows that Tony Gwynn is my favorite athlete of all-time.  However had Rickey not been traded to the Evil Empire in December of 1984, there's a chance that he would have laid claim to that title.

Growing up in the Bay Area, Rickey was the man and to this day he remains my favorite Oakland Athletic of all-time.

As for the card's design... it's rock solid.  The bright yellow, blue, and red streaks of stars really stand out due to the beautiful black borders.  Throw in a portrait with an action shot and you have a very attractive card.

It took a few years, but I finally noticed its resemblance to the 1971 Topps Greatest Moments design.

I'm not exactly sure why Fleer decided to use a portrait showing off the side of Rickey's face, but they easily made up for it with the photograph of Rickey's trademark neon green batting glove and him stealing second or third base.

Although if I'm being brutally honest, I've have to deduct a few points for chopping off his left foot.

But forget about Rickey's missing foot for a moment and check out his thighs.

Damn.  Those things are huge!  No wonder he stole all of those bases.

This card's front is so awesome that Fleer pretty much gets a free pass on the back. 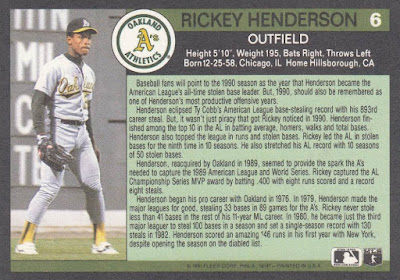 But they didn't use it.  They added another photograph, a team logo, the standard biographical data, and an in depth summary of Rickey's career up to that point.  The different shades of green to represent the team's colors was a nice bonus.

This card is missing career statistics, but this isn't a base card... it's an insert... so this card is fine without them.

Overall, I'd give this card a solid 9.3 out of 10.  The portrait photo and poorly cropped action shot are the only things keeping this from pure awesomeness.

I'm a little surprised that this set doesn't receive more hobby love, but I guess beauty is in the eye of the beholder.  It probably doesn't help that 1991 Fleer is one of the most disliked baseball sets around.

As for The Man of Steal himself... this card was released on the heels of arguably his best season, right around the time he broke Lou Brock's career stolen base record, and probably at the peak of his hobby popularity.  Yet it wouldn't surprise me if there are thousands of these sitting in collector's common boxes and card show's dime boxes.

Well that's it for today.  The MLB All-Star Game is about to begin.  Anyone else going to watch?

Happy Tuesday and sayonara!
Posted by Fuji at 4:30 PM