It's no secret.  I like seeing team logos on my cards.  But, who the heck needs team logos when you're dealing with animals, politicians, planets, professional eaters, and individual sports like surfing, tennis, and golf?

That's exactly what you'll get when you dive into a box of Goodwin Champions.

Okay... so there are a few guys like Lebron James, Wayne Gretzky, and Michael Jordan who play or played on teams.  However they're definitely in the minority.  So if you're looking for baseball, basketball, football, and hockey cards... then there are probably better options for you out there.

On the other hand... if you're a collector who appreciates variety... then this product rivals Allen and Ginter. 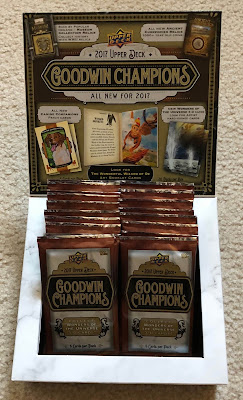 Last week, Mario over at Wax Heaven generously sent me a box of 2017 Upper Deck Goodwin Champions and it didn't take long for me to rip through the twenty packs.

Upper Deck guarantees an average of three hits per box, which range from autographs, memorabilia cards, manufactured relics, to Wonders of the Universe lenticular cards.

As a guy who appreciates the "hits", I figured I'd kick things off with the three that I pulled: 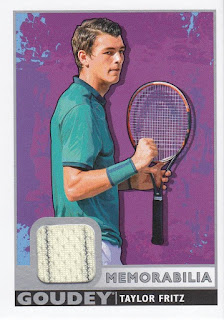 This is a great looking memorabilia card, but I've never heard of Mr. Fritz.  According to the ATP World Tour, he's currently ranked #68 in men's singles.  He's only twenty years old, so maybe he'll end up being the next Roger Federer. 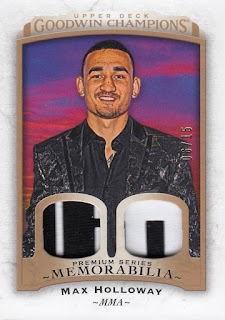 Now I've definitely heard of this guy.  He's currently the undisputed UFC Featherweight Champion who was supposed to fight last night at UFC 226.  Unfortunately due to health concerns he was pulled from the card earlier in the week.

Holloway was born in Waianae, which is where my father spent part of his childhood.  This card will make a sweet addition to my Hawaii PC. 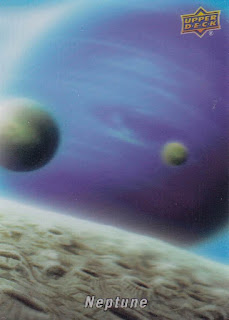 2017 UD Goodwin Champions Wonders of the Universe #U-10

I'm a huge fan of lenticular cards and the idea of having cards featuring planets and other celestial objects is pretty cool.  However... I think of this as more of an insert card, than a "hit".

Neptune is considered a tier one "hit", which is the most common.  Although these were inserted into only 1:64 packs, which makes it a fairly tough pull.  Maybe that's why Upper Deck considers them "hits". 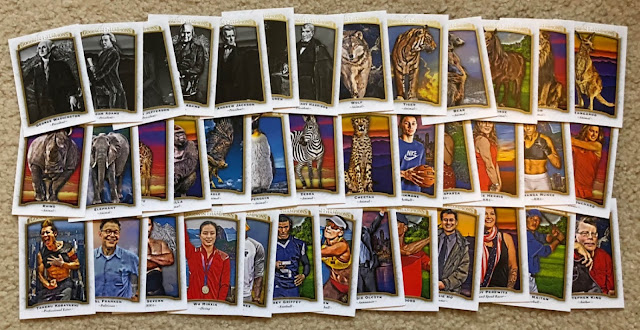 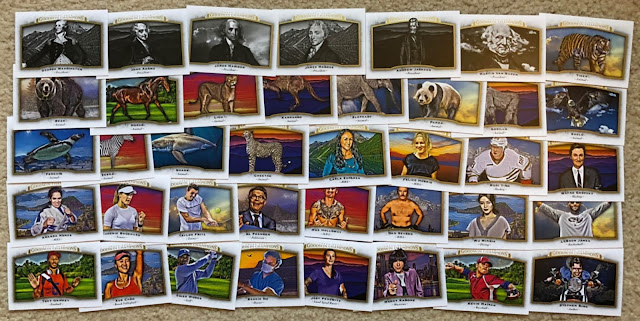 And 5 black and white SP's. 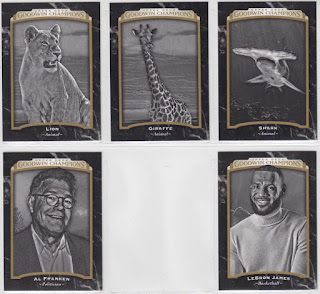 Collation was perfect!  No duplicates.

Overall... I really love the look of the base card set which is why I've decided to try to complete the 100 card portrait and landscape set.

Here's a closer look at two of my favorite base cards: 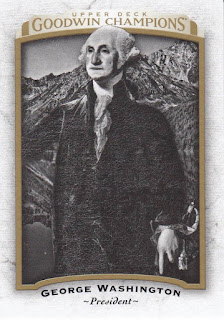 U.S. President trading cards are cool!  And this particular design is one of the coolest.  I'm just bummed that Upper Deck chose to only create cards for the first nine U.S. Presidents.  I would have loved to have seen a President Reagan or a President Obama card. 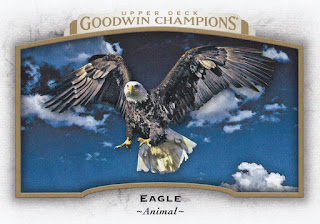 One of the 2017 Goodwin Champions subsets is animals and they're fantastic.  This particular card was hands down my favorite card in the box.  Yes.  That includes the Holloway.  It's simply breathtakingly beautiful.

The last twelve cards from the box were inserts and parallels.  Here are the five Goudey inserts I pulled: 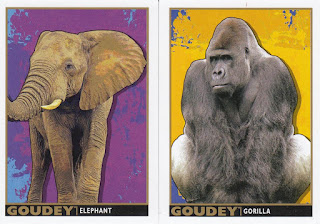 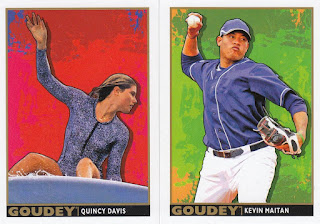 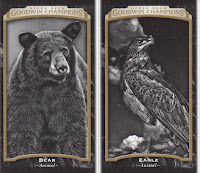 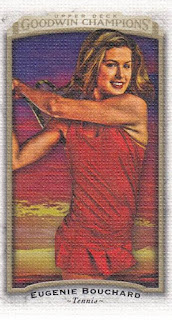 Tall blondes aren't usually my cup of tea, but after looking Ms. Bouchard up on Google... I've gotta admit that she's very easy on the eyes.

Well there you have it: 2017 Upper Deck Goodwin Champions.  Overall I was very impressed with the overall look of the cards... especially the U.S. Presidents and animal subsets.  Variety is truly the spice of life.

Are you a Goodwin Champions kind of collector?

Once again... a huge thank you to Mario a.k.a Wax Heaven for hooking me up with this very generous gift.  It definitely helped brighten up my week. 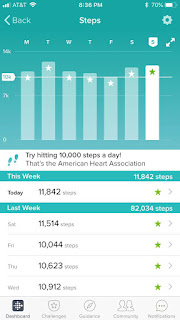 On May 14th, I challenged myself to walk 10,000 steps every day for 56 straight days (sort of as a tribute to Joe DiMaggio's 56 game hitting streak). 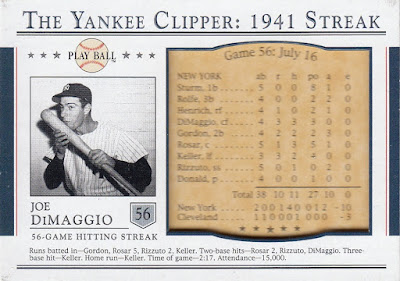 Today was Day #56.  It wasn't easy.  There were a few days I considered giving up, but I'm so grateful that I didn't.

Will the streak continue?  Maybe.  Maybe not.  It should continue for at least the next five days.  However next Saturday, I might just be like Wally Pipp and take the day off.
Posted by Fuji at 3:00 PM