Summer break is about relaxation and recharging the batteries.  Unfortunately, my break is still four weeks away.  I'm not sure if it's my age... or if it's the kids... but summer school is kicking my butt right now.

Throw in my daily walking routine and I'm thoroughly exhausted by the time the sun goes down, which typically occurs around 8:30ish here in the Bay Area.

That's one of the reasons it's taken me over two weeks to write up my Serramonte Mall Sports Card, Toy, and Collectibles Show post.

With that being said... one of the purchases I made was truly an oldie, but goodie.  In fact, I've decided to split up my card show haul into two posts to give it its proper due.

Today's post will focus on the smaller purchases.  Let's call them the card show appetizers...

As I mentioned in Sunday's post... I'm one of those collectors who still embraces "hits" like it was 2008.  Within five minutes of walking around the show, I found a guy with a $2 bin filled with some decent cards.

I struggled to find fifteen cards, so I put a few back, took the $10 deal, and grabbed these:

As an autograph guy, I was pretty stoked to see the Olerud signature sitting in the box as well as the jersey/stick card of The Dominator.

I have a few buddies who set up at this show and one of them has a really nice dollar bin.  I probably could have spent $30, but I demonstrated self control and settled for these five:

It's kind of sad to see a first ballot hall of famer's rookie card sitting in a dollar bin.  That and the Riggins memorabilia card were my two favorite finds from this box.

Have you ever talked shop with a dealer for so long, you felt obligated to make a purchase?  I was talking to this guy about basketball (which I don't even collect anymore) for nearly 10 minutes.  At least I walked away with a new Bonds insert for my binder.

On Thursday, I'm going to show off one of my favorite card show purchases of all-time.  These last two purchases in today's post came from the same dealer... 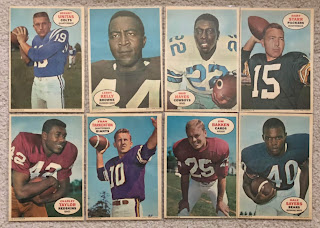 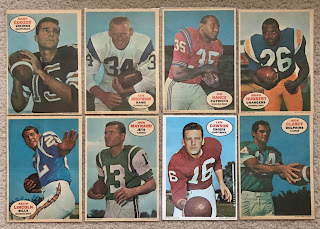 Two years ago, I wrote about purchasing two vintage baseball card sets from guy who seemed to be purging his collection.  He was back again with more vintage sets and lots.

Although football normally takes a backseat to baseball, I just couldn't pass up the opportunity to own a 50 year old insert set for a little more than the price of a blaster box. 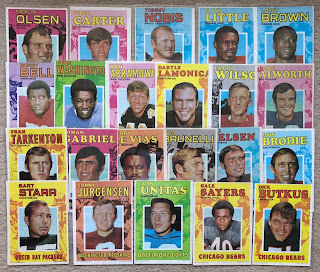 This was sort of a "throw in" deal, since I was buying the 1968 Topps Poster set.

I figured the Starr and Unitas were worth about $5 each... which means I was getting 20 other posters for 25¢ a piece.  I'm going to try and finish this set, since I'm more than two-thirds of the way there.

Well that's it for today.  Stay tuned for the big ticket items, which will be unveiled on Thursday.  Here's a hint... they're vintage and they're gr-r-reat!