Growing up in the 70's and 80's, I remember my parents talking to me about the tension between the Soviet Union and the United States.  Things like bomb shelters and missile silos captured my attention, which is probably why I enjoyed watching movies like Red Dawn, Firefox, and WarGames so much.

By the time I was a senior in high school, the Cold War was coming to an end and the world witnessed the fall of the Berlin Wall.

A few months after the historic event, some of the members of the high school German Club visited Berlin during Spring Break.  My friend brought home a few small pieces of the Berlin Wall in a bag.  I was super jealous.  There's just something so cool about owning an actual piece of world history.

Topps must have read my mind, because years later they produced a special memorabilia card that contains remnants from the Berlin Wall: 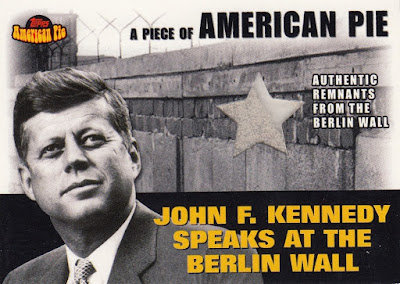 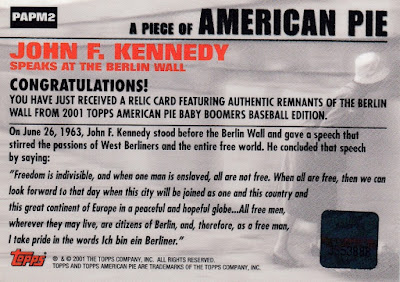 This is one of his most famous speeches.

It's a shame that President Kennedy never had the opportunity to see the fall of the wall.

He didn't get to see the reunification of a proud country, nor did he have the pleasure of seeing families reunite after being separated for nearly three decades, because less than five months after this speech he was assassinated in Dallas, Texas on November 22, 1963.